The red cloaks and white bonnets made for quite the spectacle. We’re not sure if the vice president appreciated it, though. 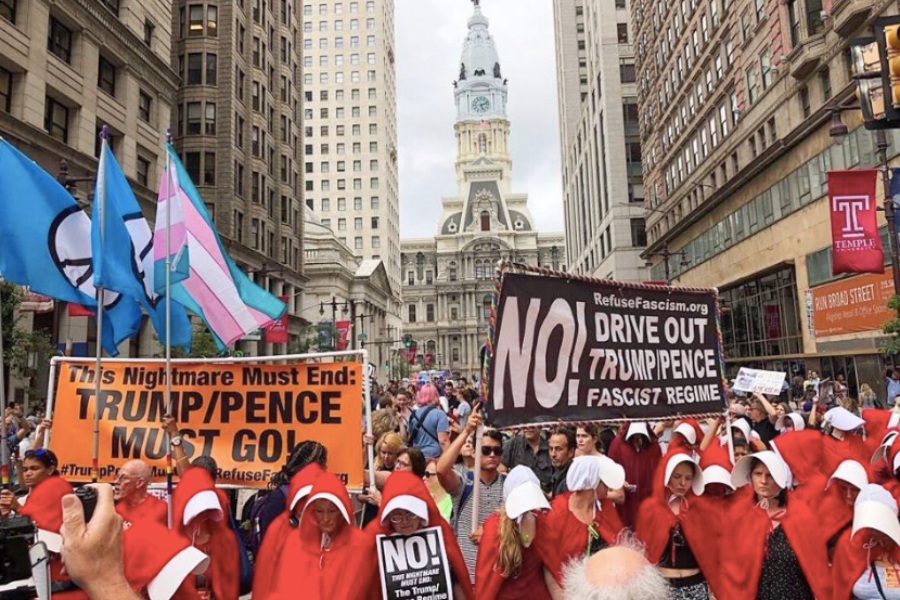 Hundreds of people dressed in garb from The Handmaid’s Tale to protest Mike Pence on Monday. | Photo via Refuse Fascism Philly

As anyone who traveled through in the area probably knows, the vice president made an appearance on Monday in Center City, and protesters (once again) went all out to welcome him — Philly-style, of course.

This time, roughly 100 people turned up in the red cloaks and white bonnets referenced in Margaret Atwood’s 1985 dystopian novel The Handmaid’s Tale.

How the most LGBTQ-friendly city in America greets VP Pence pic.twitter.com/aChP4GXJPw

Why? Because dystopian times call for dystopian measures, protesters said. They felt that the novel-turned-Hulu-show, which revolves around a totalitarian society that treats women as property void of any purpose beyond reproductivity, would send a fitting message to Pence, a devout Christian with a strict anti-abortion resume.

The results made for a pretty dramatic display on Monday.

Many of those who protested on Monday made their gowns themselves and gathered to prepare for the protest beforehand at places like Fergie’s Pub. After the demonstrators grouped up outside the Union League building around 5 p.m., they mostly stood in silence, except to read a pledge to “refuse Fascism.” Eventually they shed them robes and piled them together on the street. At least a hundred other people protested nearby in plain clothes.

The Handmaid’s Tale—themed protest was organized by Refuse Fascism Philly and the Philadelphia chapter of the National Organization for Women, among other groups. Organizations like Tuesdays with Toomey, NextGen Pennsylvania, Philly UP, Indivisible Philadelphia and Planned Parenthood also rallied on Monday.

Protesters booing Mike Pence upon his unfortunate arrival in Philadelphia. This is beautiful. #RESISTpic.twitter.com/aoJWAixYmv

The handmaids are here to protest Mike Pence. pic.twitter.com/rwm1Bsbeik

Protesters break the silence, take off their costumes, and start calling for Trump and Pence to go #penceinphilly pic.twitter.com/O7QRrl0sFq