It’s a huge win for protesters who camped at City Hall for weeks and demanded that the mayor reaffirm Philly’s so-called sanctuary city status. 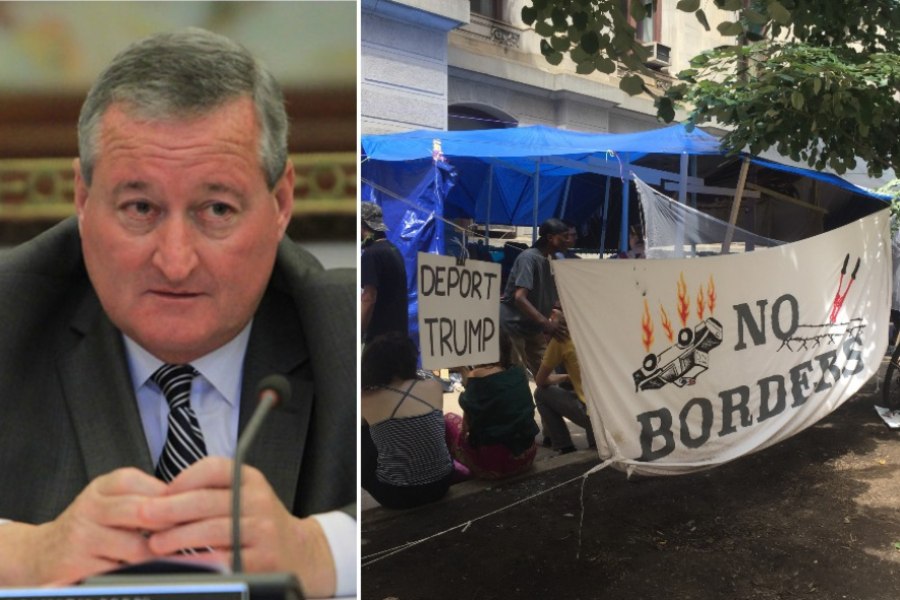 Philadelphia Mayor Jim Kenney announced on Friday that the city will not renew a contentious agreement that allows Immigration and Customs Enforcement to access a sensitive city arrest database.

Speaking at a press conference on Friday, Kenney said that that deal has allowed ICE to use arrest information in “inappropriate ways, including to conduct investigations that result in immigration enforcement against law-abiding Philadelphia residents.”

The move is a win for protesters who have, for weeks, demanded that Kenney end the city contract, which permits the federal agency to view data in the city’s Preliminary Arraignment Reporting System, or PARS.

“My administration engaged in dialogue with ICE in recent weeks about its use of PARS data, and rather than allay these concerns, ICE officials in fact confirmed many of them,” Kenney said on Friday. “Such practices sow fear and distrust in Philadelphia’s great immigrant community, and make it more difficult for our police department to solve crimes. I cannot, in good conscience, allow the agreement to continue.”

When advocates for the immigrant community brought to our attention concerns about a longstanding agreement the City had with ICE, we took them seriously. We engaged in a dialogue with ICE about its use of PARS data, and unfortunately, ICE officials confirmed our concerns. pic.twitter.com/5UDq6qx2Kw

In response, ICE officials say they are “deeply disappointed with the city’s decision to abruptly terminate the agency’s decade-long access to the PARS system.”

“As it has been repeatedly stated, ICE was at no point in breach of the terms of its access to PARS,” agency officials said in a statement. “The city’s refusal to honor detainers, coupled now with the termination of the PARS contract, further restricts ICE from detaining individuals with pending criminal matters or criminal convictions, and only adds insult to injury by needlessly compromising public safety.”

The agency said it would remain “committed to its efforts to uphold public safety in the City of Philadelphia.”

Kenney’s announcement comes hours before he is set to meet with the city’s ICE protesters on Friday afternoon — the result of a demonstration in a City Hall stairwell on Wednesday, where protesters demanded to speak with Kenney.

The PARS contract was set to expire on August 31st. Kenney said his office discussed the decision for weeks leading up to Friday’s announcement, including with the District Attorney’s Office (which was on board with ending the agreement), as well city solicitor Marcel Pratt and immigration advocacy groups like Juntos and the New Sanctuary Movement.

Representatives from both groups, as well as those from several other community organizations, attended the press conference on Friday. Members clapped and cheered when Kenney announced the decision, and again when city officials thanked the groups for their work on the issue.

Ending the agreement required approval from at least two of three Philadelphia entities that use PARS: the police department (which reports to the mayor on the issue), the District Attorney’s Office, and the First Judicial District.

DA Larry Krasner said he was “thrilled be one of the two necessary votes to end this oppressive practice.”

Thank you @Vamos_Juntos_ @HIASPA @NSMPhilly @NSCPhila @CLSphila @aclupa and others who have advocated for immigrants, who documented the painful stories of abuse that have led to today’s decision, and have always led the way to make sure Philadelphia is a welcoming city pic.twitter.com/QcAfNDQd5c

The Mayor’s Office said several considerations led to the decision not to renew the PARS contract. According to the office, they include:

Discussions and protests regarding the city’s PARS agreement had ramped up in previous weeks as a national push by progressives to #AbolishIce took off. Protesters had asked Kenney to solidify the city’s so-called sanctuary city status by ending the PARS agreement with ICE.

Demonstrators set up camp on the east side of City Hall in early July — after police used bikes to destroy their tents and sleeping bags outside an ICE office at 8th and Cherry streets in Chinatown — and have remained there since. After the announcement on Friday, celebratory cheering could be heard near the camp.

Speaking at the press conference on Friday, Miriam Enriquez, director of the city’s Office of Immigrant Affairs, called the choice to end the PARS agreement “the right decision.”

“It’s a decision that will once again reinforce to our immigrant communities that the city is not an extension of ICE,” Enriquez said. “Witnesses and victims of crime in our city will know they need not fear adverse immigration consequences when they report crimes or use services offered by the city.”

Today, I’m announcing that we cannot in good conscience allow the PARS agreement to continue. Sharing arrest information with ICE sows fear and distrust in our immigrant communities. It also makes it more difficult for @PhillyPolice to solve crimes. https://t.co/1HQVh6LwA3