Philly police officers used bikes on Thursday to break up a makeshift camp of people pushing to abolish ICE. Now, the protesters are setting up tents at City Hall. 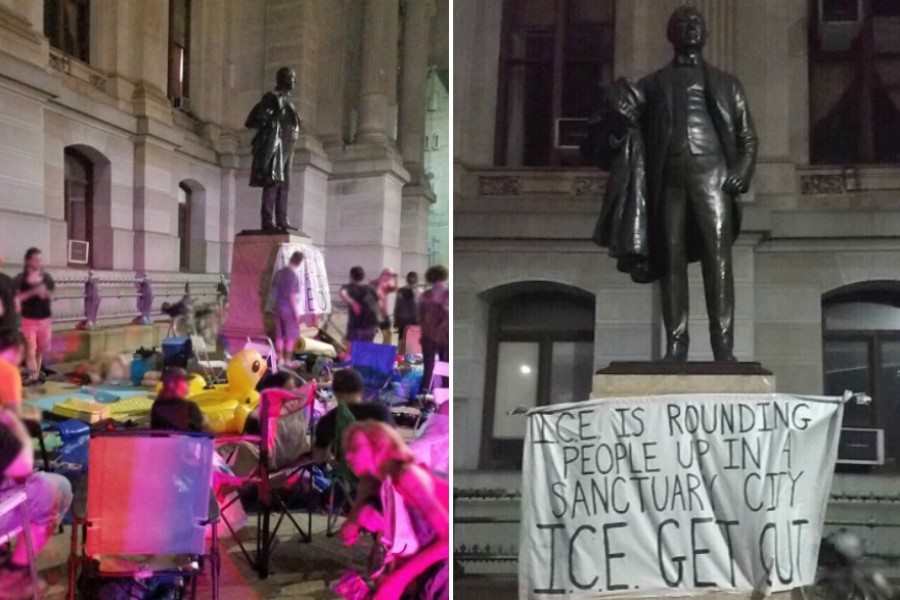 Protesters set up camp at City Hall on Friday morning. | Photos via the Liberation Project/Twitter

Philadelphia police officers broke up an encampment set up by protesters outside the Immigrations and Customs Enforcement office on Thursday afternoon — and now some protesters are taking their message to City Hall.

Around 2 p.m., more than a dozen police officers used bikes to push down tents and canopies set up earlier this week by people protesting ICE and the controversial separations of immigrant families at the U.S. border with Mexico. The protesters had assembled as part of a national push by progressives to #OccupyICE offices around the country.

The Philadelphia Police and Department of Homeland Security have swept and taken nearly all encampment supplies from #OccupyICEPHL pic.twitter.com/QAiuYKo8vz

Thursday was the fourth consecutive day that people had camped outside Philadelphia’s ICE office, located at 8th and Cherry streets in Chinatown. Police say they had warned protesters to move away from the office — and off streets and sidewalks — several times through the past few days. Protesters say they were not given enough warning before the raid.

The protesters say that despite the raid and the arrests, they will not back down from their demands: In addition to pushing for ICE’s dissolution and the closure of a contentious family detention center in Berks County, they’re asking Mayor Jim Kenney and the city to stop sharing data from the city’s Preliminary Arraignment Reporting System — an arrest database — with ICE, which is part of an agreement set up through a contract that expires at the end of August.

Some protesters are now taking their message straight to City Hall. According to several Twitter  and Facebook posts, groups like the Liberation Project have begun assembling outside the building, and they’re asking for supplies (like food, water and shelter), indicating that they plan to stay.

We have arrived! Come join us on the east side of City Hall!#OccupyICEPHL #endPARS pic.twitter.com/sC98uyct00

A Facebook event page for the City Hall protest says organizers “want to take this straight to the top and meet with the mayor and city council every day until Mayor Kenney meets the demands of this occupation.”

“Once again we will reiterate that this is a peaceful occupation. We will give no reason for the cops to enact violence on us,” the page reads. “We simply will occupy this space until Mayor Kenney ends the disgusting Pars agreement that puts communities in danger.”

Some background: While city officials prefer not to refer to Philadelphia as a “sanctuary city”, they have repeatedly clashed with the federal government over the city’s strong pro-immigration stances and policies. So the police raid of the anti-ICE encampment has some protesters asking where, exactly, Kenney stands on the issue.

The city has not yet said whether it will renew its PARS agreement with the federal government. Kenney himself has yet to weigh in on the encampment raid; a spokesperson for the mayor told Philly.com that while Kenney “agrees with the premise of the protest, he cannot make exceptions to the law and allow individuals to create a threat to public safety by blocking access to a building and setting up permanent encampments.”

Philadelphia police just cleared the #OccupyICEPHL encampment! Hey @PhillyMayor, is this what a sanctuary city looks like? pic.twitter.com/0Ny8GkMILo

So disappointed in our mayor, who always speaks about Philly being a sanctuary city, not calling off the police like Portland's mayor did. This is NOT a sanctuary city and this video is proof. Check your sources, Mayor Kenney. #OccupyICEPHL https://t.co/aXR72Oosba

The local ICE encampment effort is being led by the Philly Socialists, the Democratic Socialists of America, and Reclaim Philadelphia. The groups (and individual protesters) posted footage of Thursday’s police raid to social media.

wow: a cop working to shut down the ICE occupation has a blue lives matter flag tattoo. haven’t we seen this before in philly? i’m exhausted by racist cop tattoos at this point!!!! #OccupyICEPHL pic.twitter.com/0bD7Jg58qa

The cops cleared the camp: there are more ppl then ever before gathered vowing to fight harder to smash ICE #AbolishICE #OccupyICEPHL #OccupyICE pic.twitter.com/27Z3g6Wc0t