The district, which had proposed seizing the newly opened public garden for a middle school, has instead reached a tentative agreement to purchase property owned by the Foundation for Islamic Education. 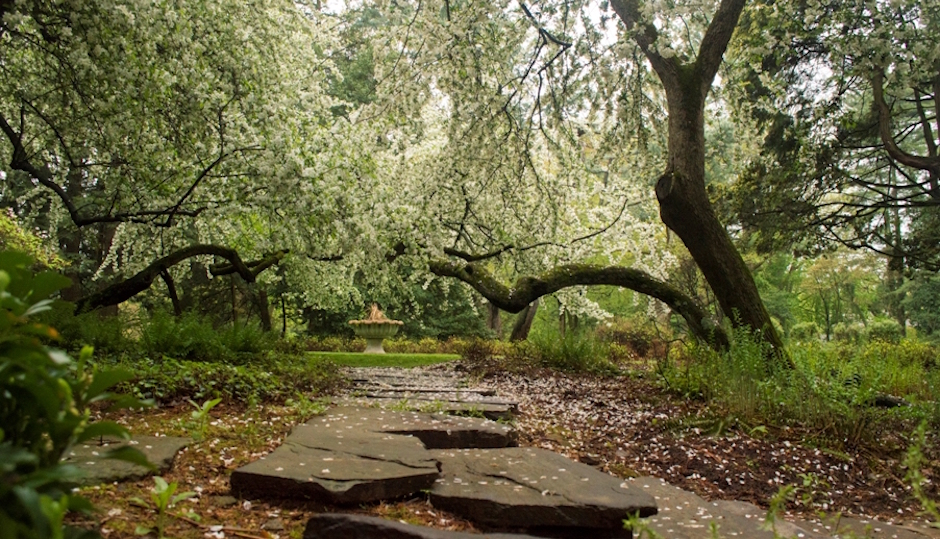 One of the pathways at Stoneleigh, the former John and Clara Haas estate in Villanova. Photos | Natural Lands Trust

It looks like most of Stoneleigh garden — a recently opened 42-acre nature preserve on the Main Line — is likely saved.

The garden’s future was called into question earlier this spring when Lower Merion School District officials proposed seizing the property through eminent domain and using it as the site of a new middle school. Outrage from community members and parents (which came in the form of a letter on Tuesday) has prompted the school to reevaluate its options.

I did not think I could be outraged by one more thing. But, apparently I can. The position of the ⁦@LowerMerionSD⁩ is indefensible. The Haas family’s contribution to the region is incalculable. Their legacy must be honored. #SaveStoneleigh https://t.co/wbWGtAGhAt

At a school board meeting on Monday night, the district announced a new plan to pay $12 million to buy a 22-acre property located along the 1800 block of Montgomery Avenue in Villanova, which is currently owned by Foundation for Islamic Education, the Inquirer reports. Officials have reached a tentative agreement regarding the proposal.

The Foundation for Islamic Education has asked for continued use of the property for daily prayers and schooling through the end of the 2018–19 school year, Paul French, a real estate broker who represents the foundation, told the newspaper.

Lower Merion, one of the wealthiest, top-rated school districts in the state, is plagued by overcrowding. The district prides itself on its small and intimate classroom — but it’s one of the fastest-growing school districts in Pennsylvania: Enrollment is expected to surpass 9,300 students (there were 8,600 in fall of 2017) in the next 10 years. Officials have said that there are many challenges to building a new middle school, which would help to ease some overcrowding concerns, include finding space in a township that’s seen a strong development surge in recent years.

The school district is still reportedly considering seizing 6.9 acres of Stoneleigh, which is currently owned by the nonprofit Natural Lands, to be used to athletic fields for the new middle school. Natural Lands president Molly K. Morrison has criticized that plan, claiming that the specific 6.9 acres of the park is “an integral and essential part of the gardens,” according to the Inquirer.

The Stoneleigh garden is located on the former estate of billionaire philanthropist John Haas, whose family donated the property to Natural Lands in 2016. It’s free of charge, open six days a week and includes a mile-long walking path.

Morrison and Natural Lands launched a Save Stoneleigh! campaign in May.

“We remain committed to saving Stoneleigh from condemnation,” Morrison wrote in a letter published in the Main Line Times in May. “We have told the school district ‘no,’ and that answer will not change. We will pursue every available option to defend the home that was beloved by the Haas family for over 80 years.”