The state Supreme Court has until Monday to adopt a new map. 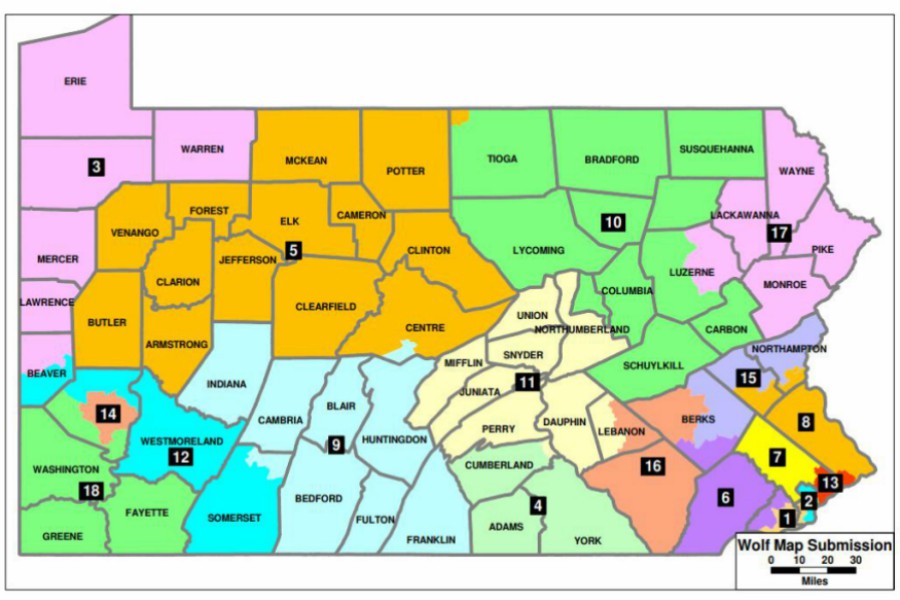 Days after Gov. Tom Wolf rejected a congressional map submitted by Republicans in the wake of last month’s state Supreme Court gerrymandering decision, Democrats and others have presented their own proposals to the court.

Their ideas for Pennsylvania’s new congressional boundaries come after the Supreme Court tossed the state’s last map, drawn by a GOP-dominated General Assembly in 2011, claiming it was “unconstitutional” because it gave Republicans an unfair advantage. The GOP-led legislature had to sign off on a new map (which they did) and secure approval from Wolf by the end of the day Thursday (which they didn’t).

Because that deadline wasn’t met, the state Supreme Court will now attempt to draw its own boundaries. Judges will take into consideration the guidance of a Stanford University professor and redistricting expert Nathaniel Persily as well as the aforementioned congressional map proposals submitted by Democrats and other parties on Thursday. The clock is still ticking – the court has until Monday to create new boundaries. Still, that won’t mean the end of the gerrymandering saga: Republicans have vowed to challenge any map the state Supreme Court adopts.

Democrats from the state House and Senate submitted two different proposals on Thursday, as did Wolf and Democratic Lt. Gov. Mike Stack. A group of Republican voters and local officials as well as those who originally challenged the state’s most recent congressional map also submitted their ideas, the Inquirer reports.

In a statement, Wolf claims his map “takes features from Republican and Democratic submissions, while still meeting the court’s orders and opinion, to provide Pennsylvanians with a fair map.​”

The governor said Tufts University professor Moon Duchin, the same independent expert he brought on to analyze boundaries submitted by Republicans last week, found that his map “exhibited no partisan skew in comparison to over a billion randomly generated maps.”

.@GovernorTomWolf submitted a congressional map to the @SupremeCtofPA. The map is fair, constitutional, and complies with the court’s order. It also accounts for communities of interests and seeks to avoid cracking, packing and unnecessary splitting. https://t.co/u1RTmAqMRd

Steve Miskin, a spokesman for House Republicans, was quick to criticize both House and Senate Democrats’ and Wolf’s congressional map proposals yesterday.

Our Congressional redistricting map meets all the requirements of the Pa. Supreme Court’s orders.

It splits fewer jurisdictions, adheres to the Voting Rights Act and does not combine any districts that either incumbents or candidates are running for election in. #redistricting pic.twitter.com/QncV4LGUrR