Letty Santarelli, who accompanied the mayor to Iceland last week, received a $13,000 bonus for her work as an office manager for the DNC — a job he recommended her for. 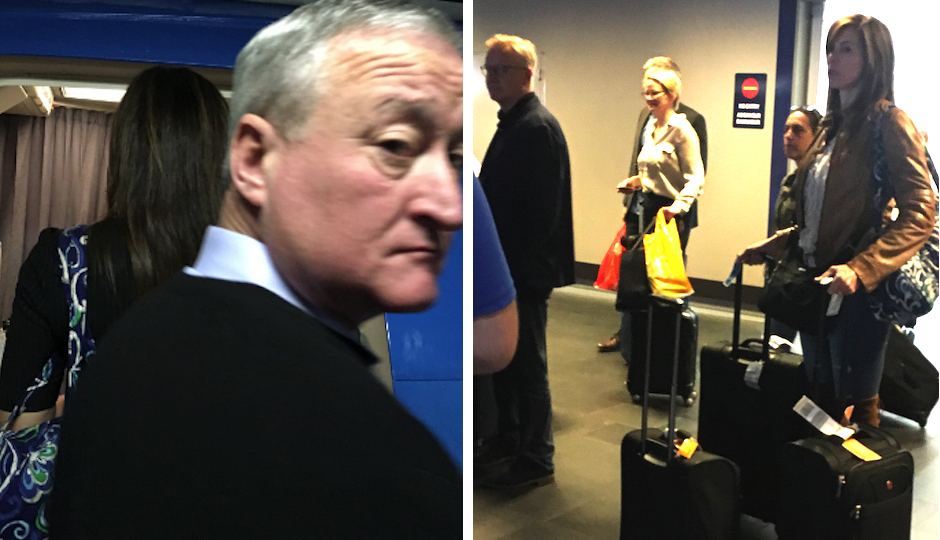 Left: Mayor Jim Kenney and girlfriend Letty Santarelli board an IcelandAir jet in Philadelphia. Right: Santarelli waits at the airport.

Mayor Jim Kenney is doing all right for himself. Not only did he get to take a free trip to Iceland last week as part of IcelandAir’s new nonstop service to the island country, but he got to do so in the company of his secret girlfriend, Letitia “Letty” Santarelli.

The 58-year-old mayor won’t tell us how long he’s been dating Santarelli, who is six years his junior, and the mayor’s spokespeople have routinely deflected questions about Kenney’s private life. But he did confirm that their romance began prior to her landing a $3,000-a-month gig as an office manager for the Democratic National Convention Host Committee that he had recommended her for; Kenney was the honorary chair of the committee. For her efforts, Santarelli was awarded $13,357 in November as part of a $1 million bonus distribution to DNC staff and volunteers. Pennsylvania’s auditor general is investigating the DNC’s expenditures, which were partially funded by taxpayers.

“I recommended Letty to the Host Committee in 2015, when they were just gearing up and before I was in office,” Kenney tells Philly Mag. “It’s my understanding that it was still a competitive process for the position, but, regardless, I should not have made a recommendation.”

According to Kenney, most of his Iceland trip was paid for by Philadelphia International Airport. Kenney says that Santarelli, who was unable to be reached for comment, paid her own way.

Kenney has been separated from his wife, Maureen, for years. Santarelli is reportedly in divorce proceedings with her estranged husband, prominent attorney Frederick Santarelli, who recently represented controversial union boss John “Johnny Doc” Dougherty in a lawsuit. The Santarellis own a home together in South Philadelphia.

Kenney’s gal made headlines back in 2014 when she abruptly resigned as the girls basketball coach at Neumann-Goretti after an investigation was launched by the league and the archdiocese into the school’s awarding of scholarships. She later filed a since-withdrawn libel lawsuit against two former high school basketball coaches, accusing them of sending “poison letters” about her and the program to the league and a college coach.

Both Kenney and Santarelli have children, all of whom are grown.

Editor’s Note: The mayor’s office contacted Philly Mag after this story was published to clarify earlier statements Kenney made about the source of the funds the airport used to pay for his trip. The story has been updated.