The Ultimate Guide to Natural Wine in Philadelphia

Where to buy and drink all kinds of natural wine, from fizzy whites to complex reds.

By Caroline Coral and Maddy Sweitzer-Lammé· 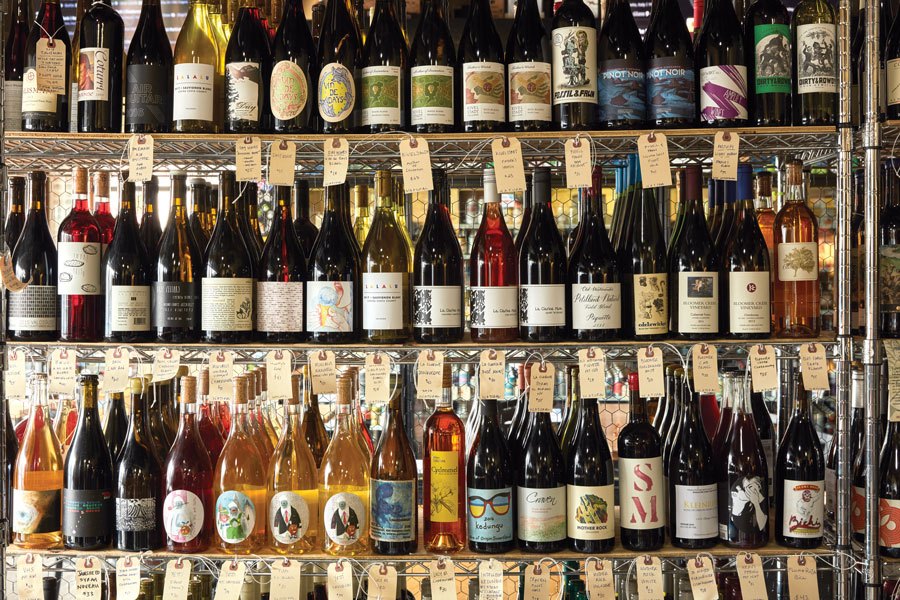 320 Market Café in Swarthmore is one of the natural wine shops near Philly. Photograph by Jason Varney

Have you noticed that there’s good wine in Philly now? And not just good wine, cool wine. Casual wine bars and design-y bottle shops are popping up across the city, catering to the city’s ever-growing clamor for natural wine, the new beverage of choice for in-the-know drinkers. Here’s all the information you need about how and where to drink in Philly.

Sande Friedman — the wine buyer for Di Bruno Bros. and a Philly Wine Week board member — shares why everyone is obsessed with this new genre of drink.

The term “natural wine” is everywhere. What exactly is it?

It’s a catch-all term for wines that are made without any chemical or technological interventions — meaning no additives like extra sugar or shelf stabilizers.

How’s that different from conventional wine?

Natural wines are made like they were back in the day, with hand-harvested grapes and natural yeast. Conventional winemakers harvest grapes with giant machines and ferment with purchased yeast. Unlike conventional producers, natural winemakers aren’t purposely adding extra sugar to up alcohol levels and encourage the wine to ferment more quickly.

What does that mean for flavor?

With conventional winemaking, winemakers have a general idea of what they want their cab or merlot to taste like, but in natural winemaking, it’s more about the expression of those specific grapes from the area, climate, maker, soil, etc.

Does less sugar mean less of a hangover?

Why has this become a big thing in Philly?

We have amazing wine buyers in restaurants and state stores, and even a few in Harrisburg. These people know that natural wines taste better and are more interesting, and they care as much about a wine’s backstory as they do about taste. And as wine importers who care became more prevalent, more people began to seek them out.

Okay, we’re sold. Where do we start?

Come talk to us! Talk to other wine fans, and don’t be afraid to chat with people working in stores. When you find a bottle that you like, turn it around and read the back of the label, so you can find the importer. Because chances are you’ll like other wines from their portfolio, too. 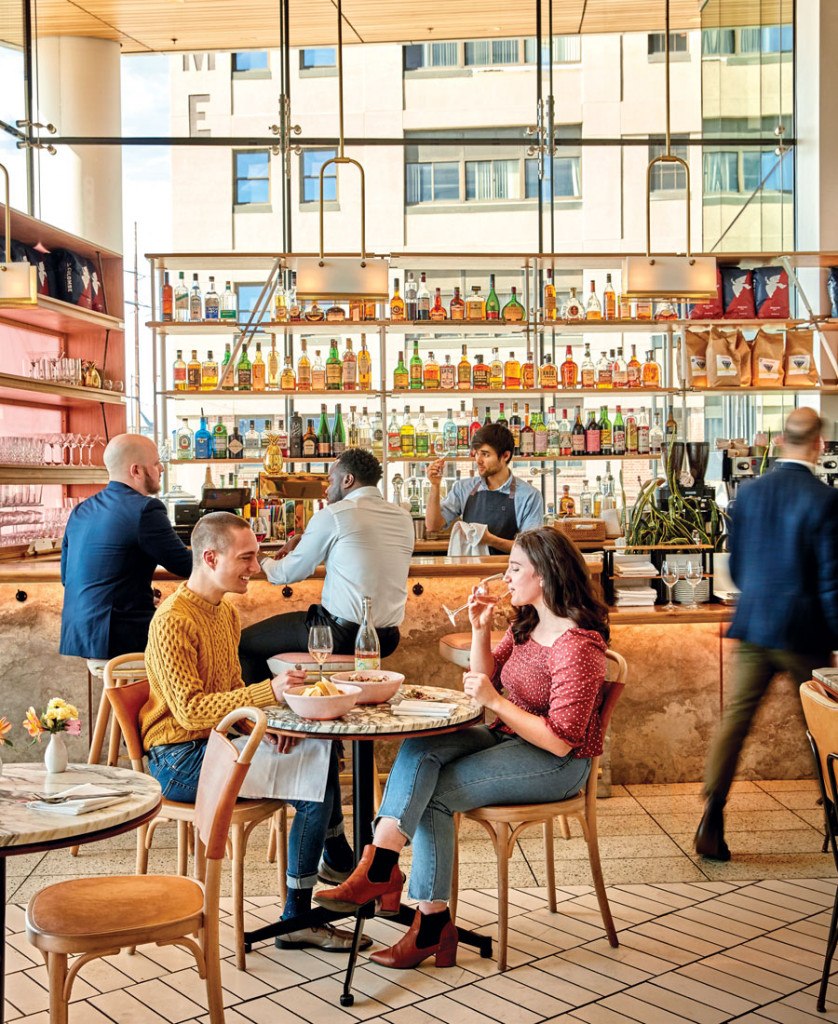 Here’s everything you need to know about natural wine around Philadelphia, and more. Photograph by Jason Varney

If the idea of ordering natural wine in a restaurant intimidates you, check out these five rules from Friday Saturday Sunday’s Etinosa Emokpae.

Horsham and Cherry Hill
When beloved Philly chef Josh Lawler booked it to the ’burbs, he traded up for a pair of standout wine lists. The bottles he sells are true gems; the nicely priced Green Valley valdiguié and bubbly Day Wines pét-nat — an easy-drinking red from Broc Cellars — are worth the trip. 575 Horsham Road, Horsham, and 1442 Marlton Pike East, Cherry Hill.

Midtown Village
The vegetable-forward plates here are complemented by a wine menu that has natural picks from far-off places — think orange wines from the Canary Islands and merlots from Australia. (The latter will make you rethink what you knew about the ubiquitous red.) Consider ordering a bottle of Ross & Bee Maloof Wines out of Oregon; it’s made by Vedge’s former beverage director. 1221 Locust Street.

Rittenhouse
There are plenty of places to get great wine on the Square, but this duo were early natural-wine adapters. (The staff here knows its stuff, too, so this is the place to ask lots of questions.) Consider going to A.Kitchen on the first Wednesday of each month for the Cellar Raid; 300-plus bottles are half-price. 135 South 18th Street and 1737 Walnut Street.

Kensington
While Martha is known as a humble neighborhood joint, the bold, broad by-the-glass lineup says otherwise. (In fact, owner Jon Medlinsky is very committed to serving only natural and mostly local.) The rotation changes often, so there are always things to explore, including pours from Las Jaras, a wine collaboration from Philadelphia-area native, noted natural-wine booster and Master of None star Eric Wareheim. 2113 East York Street.

Fishtown
Longtime devotees of natural practices will find a lot to love on the list at KQ, which is built around the offerings of importers who focus on natural, sustainable and biodynamic wines. The result: a bottle selection and tight, rotating by-the-glass list that explore themes like quaffable reds and grower champagnes. 1310 Frankford Avenue.

East Passyunk
FP is known for its all-vinyl soundtrack, excellent beer list and $5 burger, but in the past few years, the chalkboard menu has quietly begun to include glasses of Austrian skin-contact wines, fizzy pét-nats, and new-school reds from California — burger-friendly, of course. 1601 South 10th Street.

Wayne
Main Line wine lists generally bank on bordeaux rather than cult-status bottles of blaufränkisch, but Teresa’s boasts page upon page of bottles rarely spotted in the Pennsylvania wine wilds. A petite bottle shop in the cafe next door offers the entire esoteric list to take home. 124 North Wayne Avenue.

Bella Vista
Taking a cue from France’s affinity for laid-back drinking, this bistro offers a rotating selection by the glass or pichet — a shareable pitcher that’s 750 milliliters. (The wines are also cheekily categorized as “good,” “better” and “best.”) Looking to learn more? On Sundays, co-owner Chloe Grigri hosts “Keep Wine Weird,” for which she cracks open some of the wilder selections from the cellar. 614 South 7th Street.

Le Caveau
Bella Vista
Above the Good King Tavern lives Le Caveau, a James Beard Award nominated wine bar also run by Chloe Grigri that is only open Thursday through Sunday. They have a small food menu, but the intimate space is decidedly wine-focused, with a constantly rotating selection of wines by the glass and bottles to be shared. 614 South 7th Street.

University City
While not entirely natural, the menu runs from familiar to rarefied, with fascinating bottles that the staff isn’t afraid to pop open and pour. (Think celebration-worthy sancerres and half-price champagne on Thursdays.) 2929 Walnut Street.

Queen Village
No need to plow through pages of vintages at this beloved corner cafe. Instead, a concisely corralled wine menu allows for unintimidating exploration; pick any one of the under-$10 draft options (like a natural malbec from Argentina), because they’re all good. 743 South 4th Street.

Rittenhouse
There’s a note on the front page of the list that reads, “These are the wines that we are excited about right now and that we know you will love.” Sommelier Alexandra Cherniavsky delivers, with a roundup of canned wines, older bottles, and a selection of Pennsylvania and New York offerings. 130 South 18th Street. 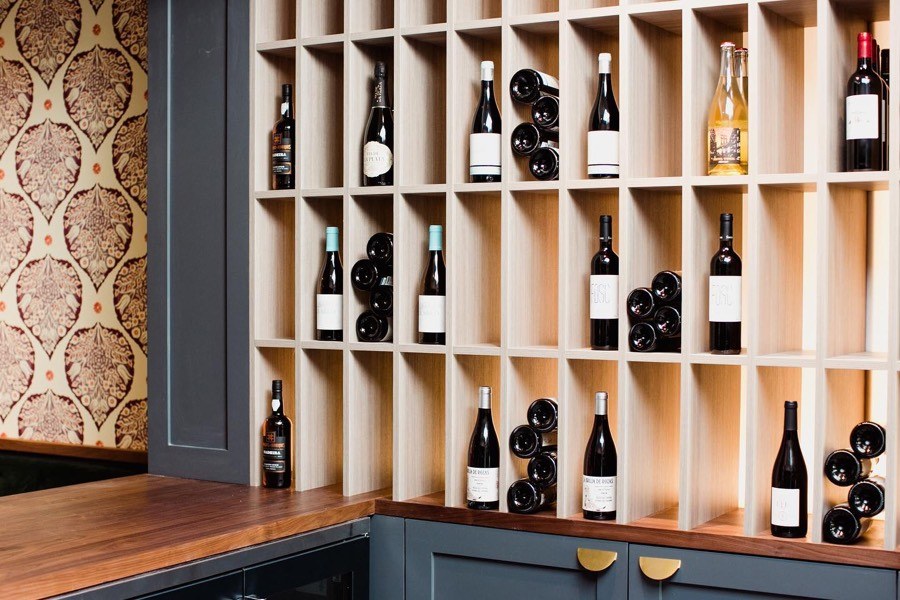 Those who cross state lines to stock up should turn the car around. The PLCB has upped its game by having luxury wine experts in select Fine Wines & Good Spirits stores (Center City, Ardmore, Bryn Mawr, Wayne, New Hope, Doylestown and Media) to point you to the best natural options. (Pro tip: While some stores have dedicated organic sections, many natural picks are stashed in the regional shelves.) If you’re not close to one of the stores with an expert on-hand, look out for these five natural wines you can buy at state stores.

If you live in Jersey, you have some great options. Find Moore Brothers (7200 North Park Drive, Pennsauken), which, despite being in an industrial park, is one of the region’s best wine sources. Owner Greg Moore left his somm post at Le Bec-Fin in 1996 to open a shop in Delaware; now, he has three locations. Moore is devoted to small-scale producers and tastes of terroir. You can also head down Route 70 till you hit WineWorks (319 West Route 70, Marlton), a superstore with international bottles and competitively priced natural gems like Jean-Paul Brun FRV sparkling rosé and Domaine de la Pépière muscadet. 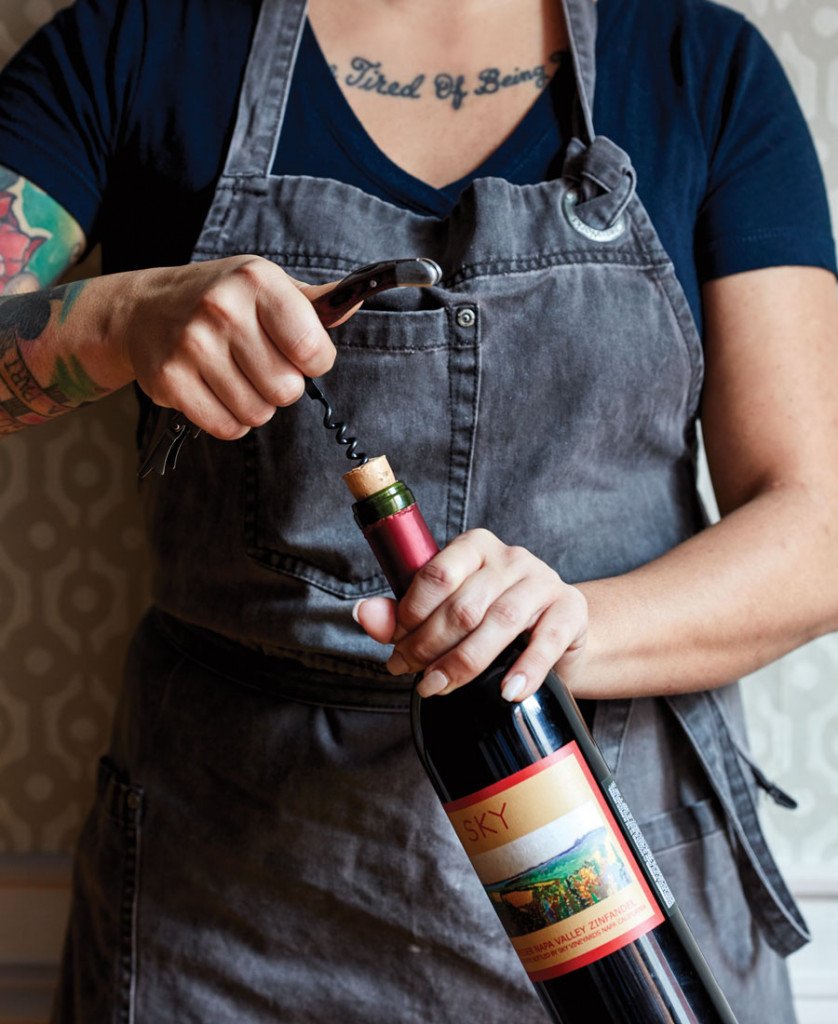 Okay, maybe it took the better part of 80 years, but Di Bruno Bros. (1730 Chestnut Street, Rittenhouse, and 834 Chestnut Street, Washington Square West) finally has a wine selection that can equal its fromage. They have even opened a dedicated Bottle Shop in the Italian Market, just a few doors down from their original cheese store. Head there for a thoughtfully curated selection of low-intervention wines, daily by-the-glass options, and plenty of tastes. When Tria Cafe (123 South 18th Street, Rittenhouse, and 1137 Spruce Street, Midtown Village) opened in 2004, it made wine bars cool again. Nowadays, patrons can carry home any bottle on the list for three times the by-the-glass price (a decent discount off menu prices).

Bloomsday Café (414 South 2nd Street, Queen Village) is a great option for all-day drinking and stocking your cellar (or fridge). The space doubles as a bottle shop curated by wine guy Tim Kweeder, who’s been charged by owners Zach Morris and Kelsey Bush (of Haverford’s Green Engine Coffee Co.) to source producers who use sustainable practices. Vernick Wine is Rittenhouse’s best option for a thoughtfully curated selection, just next door to the restaurant. And the Wine Dive (1506 South Street, Grad Hospital) is another newcomer that serves drinks and pub grub, and also houses a bottle shop stocked with natural wines not available in your state store.

Up North at Fishtown Social (1525 Frankford Avenue, Fishtown), there’s a tucked-away bottle boutique that offers a well-priced lineup to take home or tote to a nearby BYO. The Lunar Inn is a low-key neighborhood bar in Port Richmond with great food, affordable cocktails and an above-average selection of wines by the glass. They also operate Tinys Bottle Shop in an attached building, where you can buy wine by the bottle, plus cider and beer.