Driving Black Horse Pike to the Shore: Where to Stop for Square Pizza and Filipino Crabs

Long before we all hopped on the A.C. Expressway, the Black Horse Pike and its sister, the White Horse Pike, were the way it was done. You can still feel the history as you wind through suburban Jersey on this quirky, eclectic stretch of blacktop. 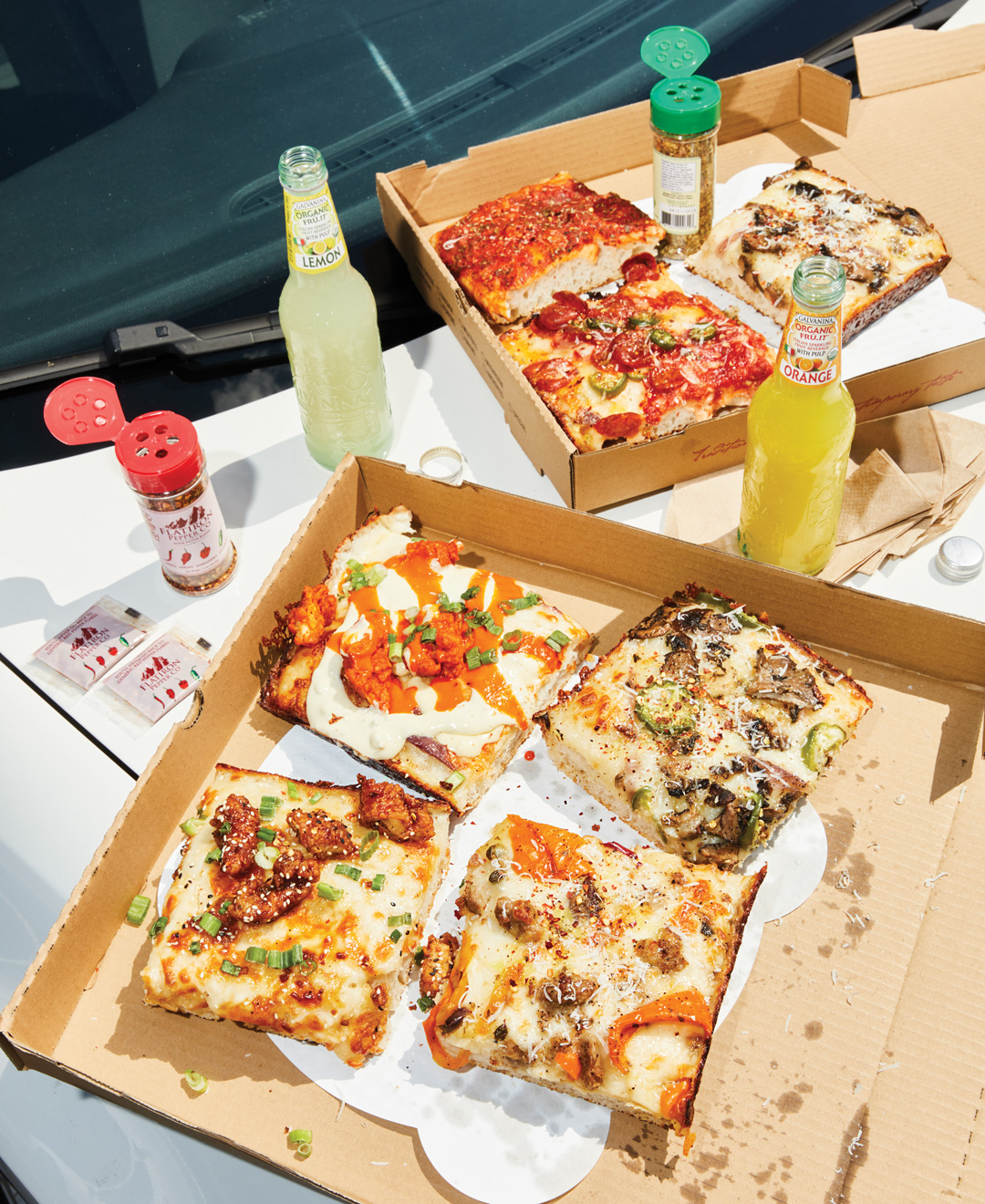 Detroit-style slices from Bakeria 1010 in Linwood. Photograph by Michael Persico

Long before we all hopped on the A.C. Expressway, the Black Horse Pike and its sister, the White Horse Pike, were the way it was done. You can still feel the history as you wind through suburban Jersey on this quirky, eclectic stretch of blacktop.

You know what makes a great road-trip snack? Beef jerky. And Frampy’s makes a ton of it, including in wacky flavors like dill pickle, Jamaican jerk, taco and Manwich. Yes, Manwich. 6026 Main Street, Mays Landing.

Locals, Filipino and otherwise, rave about this super-casual spot for Filipino food that’s tucked inside a nondescript Egg Harbor strip mall. And rightly so: The daily offerings out of the steam table are a delicious introduction to Filipino cuisine for the uninitiated, while insiders know to call ahead to reserve the kitchen’s communal meals, called Kamayan. You get a parade of dishes (anything pork-based here is to die for), snacks and drinks for between $30 and $40 a person. Be sure to tack on an order of the Filipino crabs. 3003 English Creek Avenue, Egg Harbor Township. 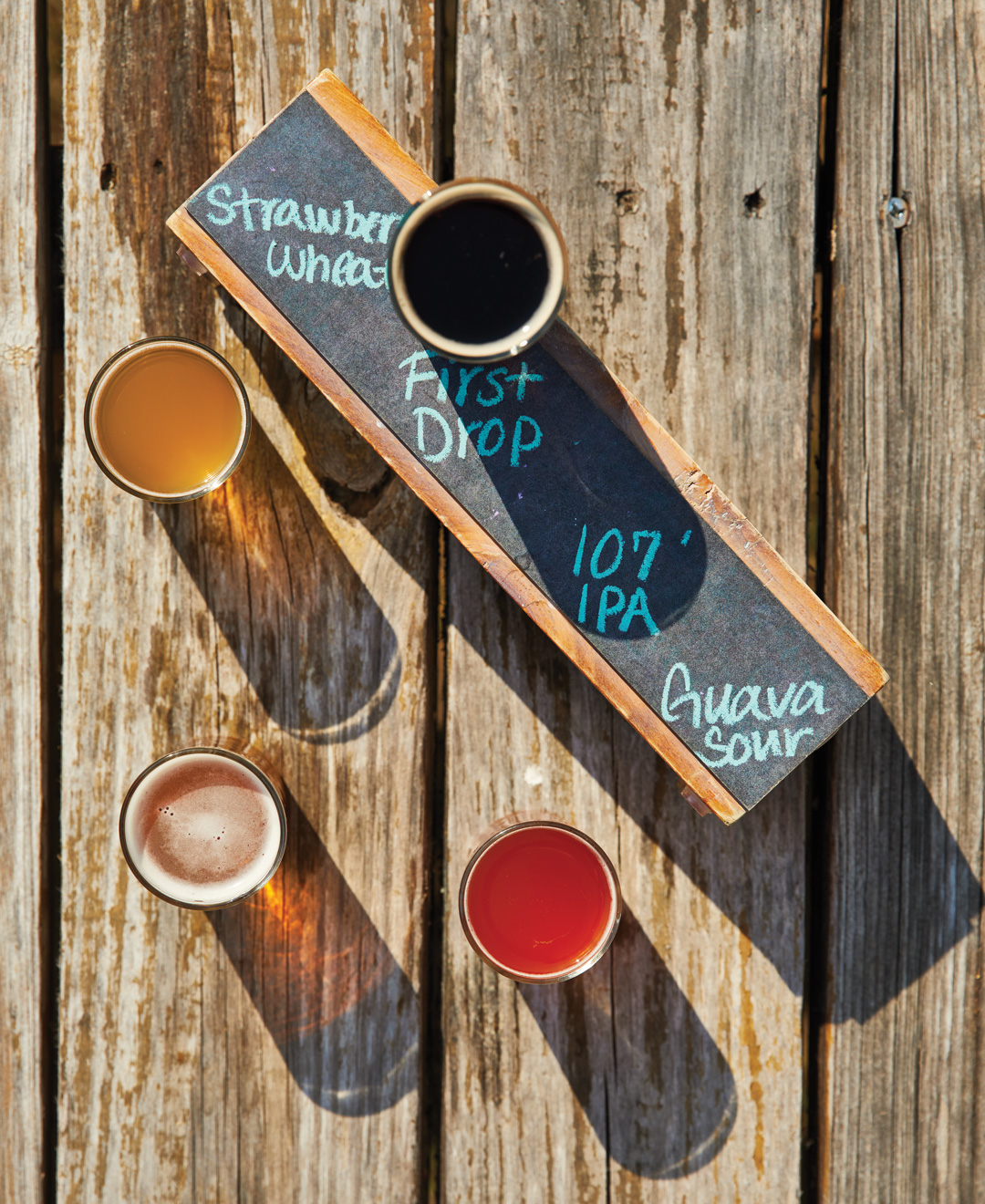 If you’re the kind of person who’s content to drink Coronas all night at the beach bars, move on. But if you’re serious about your beer, Hidden Sands is a must. The brewery’s claim to fame is a local freshwater aquifer that taps into pristine water 800 feet below the earth’s ­surface — the right water for great beer. Stop by the outdoor beer tent to taste one of the dozen or so brews on tap — from pilsners to sours tinged with orange to refreshing, summery wheats — and then snag a pack of cans or a growler of your favorite for the beach. 6754 Washington Avenue, Egg Harbor Township.

Fond of the savory English pies at South Philly’s Stargazy? You’ll love the fat, herby “hand pies” here, stuffed with meaty combos like brisket with wild mushroom and gorgonzola or Italian sausage with roasted garlic and kale. There are veggie options, too, and truth be told, the butternut squash version with caramelized onions and goat cheese might actually be the best of all. One catch: They’re only available on Fridays and Saturdays. Your best bet is to place an order before swinging by. 6825 Tilton Road, Egg Harbor Township.

There’s a lot of Mexican food in South Jersey, but the rest of Latin America isn’t represented quite as well. That’s one reason we like this place; the empanadas, arepas, lomo saltado and churrasco platters are the others. It’s South American food at its best, and you can taste that it’s made with love. 226 South Main Street, Pleasantville. 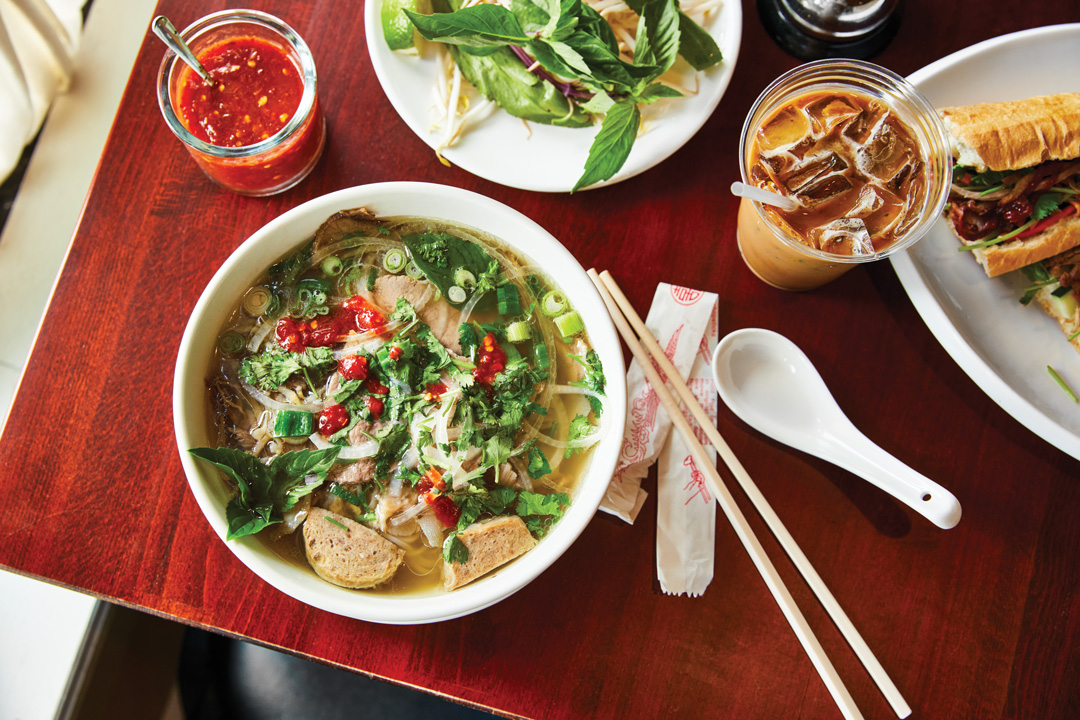 Atlantic City has always been a go-to for excellent Vietnamese restaurants, but these days, one of the very best spots — not just best by Shore standards, but best in the region, including Philly — is Pho 9, located in a strip mall in suburban Northfield. It’s a particularly perfect stop if you’re in the mood for something lighter (hey, it is bathing-suit season): Try the gỏi gà, a vinegary cabbage salad topped with tender charbroiled chicken. 1333 New Road, Northfield.

You might walk up to this medical office building and think, “I’m supposed to eat here?” Yes. You are. Because inside this building is a food hall with a pizza place so great that its fans include Shore-dwellers who regularly drive 20 or more minutes inland just for these pies. It’s a ­lighter-feeling version of a crusty Detroit-style pizza, made with fresh ingredients (including sourdough crusts baked daily) and seasonal toppings. You can buy it by the square slice or half or whole pie, though your best strategy is to order a bunch of different slices — maybe the one topped with crispy speck and potatoes? Or the Salsiccia, with sweet sausage and fried ­peppers? — and cut them down for sharing. (Two whole slices fill most people up.) But take note: Bakeria closes at 7 p.m. Wednesday through Thursday, 8 p.m. on weekends, and 6 p.m. on Sundays — and usually sells out well before that. Call ahead to reserve your slices, and maybe a loaf of focaccia while you’re at it. 2110 New Road, Linwood.

Stop for a selfie with this 18-foot-tall statue that looks like what would happen if Wonder Woman and Jackie Kennedy had a giant baby. She’s been on the scene, towering over a Blackwood tire store in one form or another, since the 1960s — a true relic from the past. And hey, speaking of relics: If you’ve got more time and young kids in the car, you should also hit up Storybook Land, an adorable and much beloved mini amusement park that you can think of as the little cousin to Dutch Wonderland. Nitro Girl, 1337 North Black Horse Pike, Blackwood; Storybook Land, 6415 East Black Horse Pike, Egg Harbor Township.

At the new American Bar & Grille, which has replaced Wolfgang Puck’s old spot in the Borgata, chef Aram Mardigian is serving up specialty burgers, intriguing pizzas, and the sort of globally inspired cuisine you’d expect from a Puck-trained talent. (In fact, he’s served as an executive chef with Wolfgang Puck restaurants since 1995.) The restaurant is in the hotel’s fine-dining portfolio, but you can expect a more casual vibe than, say, Angeline. One Borgata Way, Atlantic City.

Published as “Black Horse Pike” in the “On the Way to Cape May” guide in the July 2021 issue of Philadelphia magazine.