Driving White Horse Pike to the Shore: Where to Stop for Sweet Jersey Corn and Amazing Elk Burgers

Time was, the White Horse Pike was a toll road named after the ginormous metal horse that hovered over a local tavern. Today, it leads you through lots of small Jersey towns and long stretches of the Pine Barrens. In search of the Jersey Devil? This is your route. 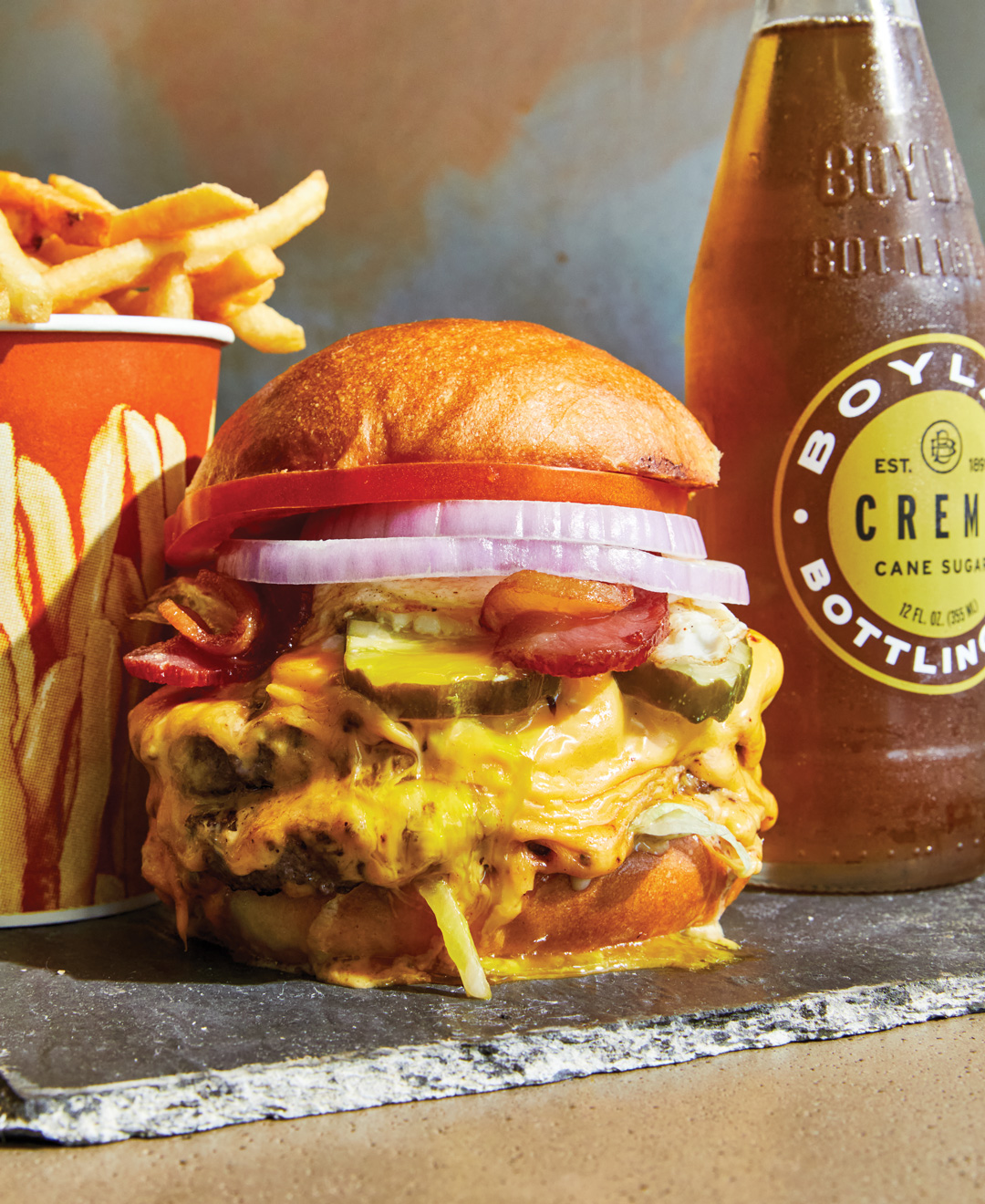 A double burger (with the works) at Tony Beef in Galloway is one White Horse Pike food stop worth pulling over for. Photograph by Michael Persico

Time was, the White Horse Pike was a toll road named after a local tavern, best known for the ginormous metal horse that hovered over the pavement. Today, none of that remains except for the pavement, which leads you through lots of small Jersey towns and long stretches of the Pine Barrens. In search of the Jersey Devil? This is your route.

While you’re filling up at the Phillips 66 station in Clementon, you might think the attached convenience store is just that. Far from it. Inside, you’ll find fresh, authentic carnita tacos — order four for $10, plus a couple of $2 bean-and-cheese pupusas from the friendly women who run the grill, with a glass bottle of cold Mexican Coca-Cola to wash it all down. 12 White Horse Pike, Clementon. 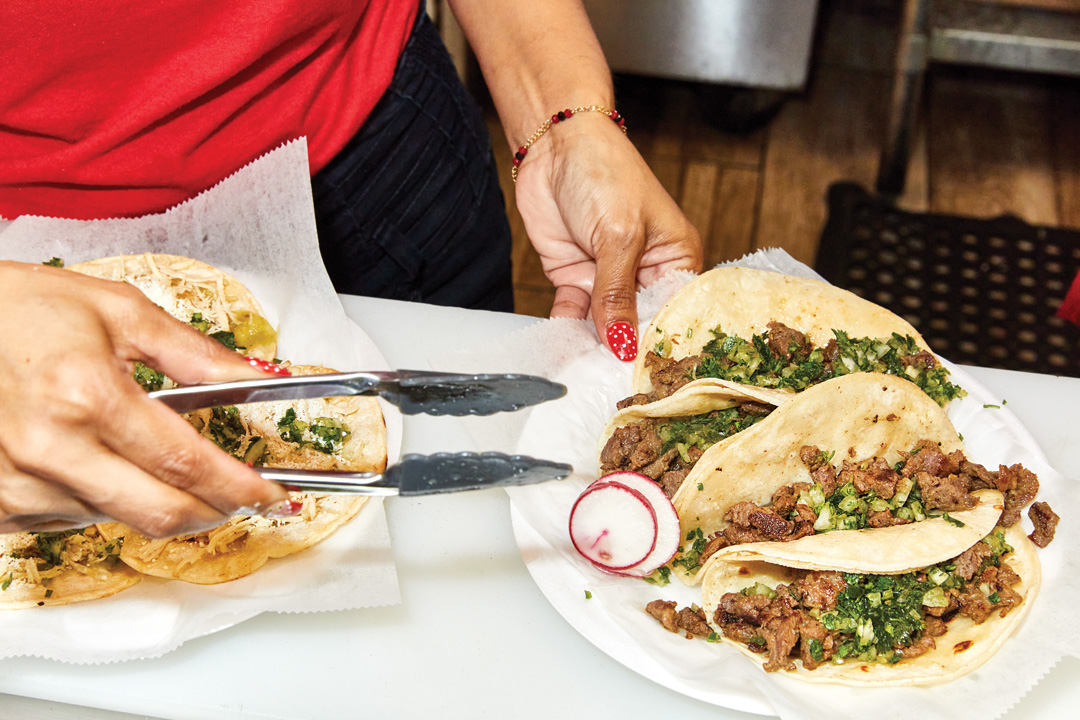 Travelers come from miles and miles around to buy sweet corn from Stella’s. Get a bushel to share with friends and neighbors and they’ll love you forever. 459 Berlin New Freedom Road, Berlin. 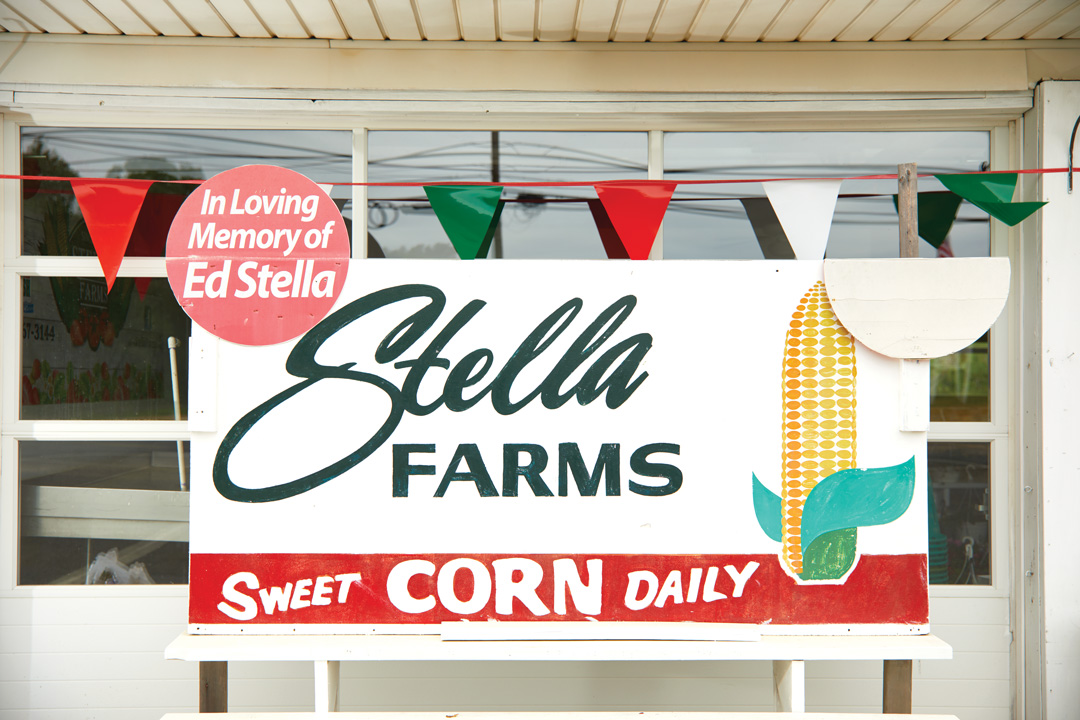 This stop, a butcher shop, is by its very nature more about delayed gratification than the rest of the places on this list, but as the kids say, if you know, you know: It’s been servicing the Shorebound since the 1930s. You can pick up homemade sausage for your Sunday gravy and thick, juicy steaks for your backyard barbecue, or even order a whole pig — roasted, carved for 12, and less than $200. That’s eating worth waiting for right there. 38 West Taunton Road, Berlin. 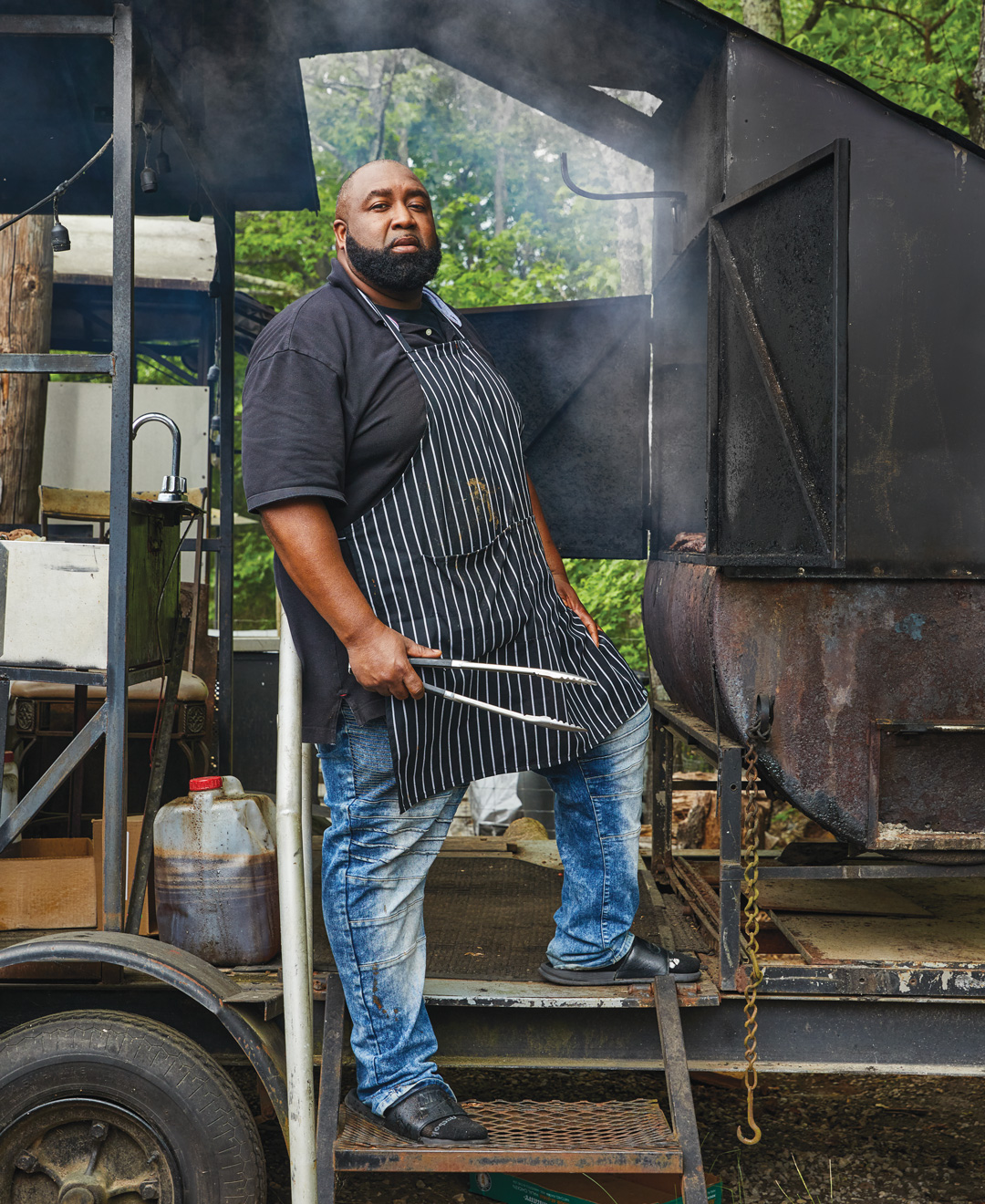 When your phone goes down to one bar, you lose all but two radio stations, and you smell the unmistakable aroma of smoked meats in the air, you’re getting close. The pulled pork and chicken at this roadside BBQ shack are great, but it’s all about the ribs here: smoky, saucy, served up hot and ready to tear into. Curious about the “Kingfish” part? That was the nickname of the current owner’s grandfather, who set up his smoker here one day in 1968 and never looked back. 926 Route 206, Shamong.

You can’t get Haitian food just anywhere in these parts, and at this plainly named Sicklerville spot, the dishes are exactly what you’d find in Port au Prince and Jacmel. If you’re new to the cuisine, the sweet staff will guide you through the many options. (Be sure not to miss the ­griot — fried pork shoulder — and stewed goat.) Heads-up: The chilies in the pikliz, a sort of vinegar-based coleslaw that comes on the side of every dish, are Scotch bonnets. You’ve been warned. 412 Sicklerville Road, Sicklerville. 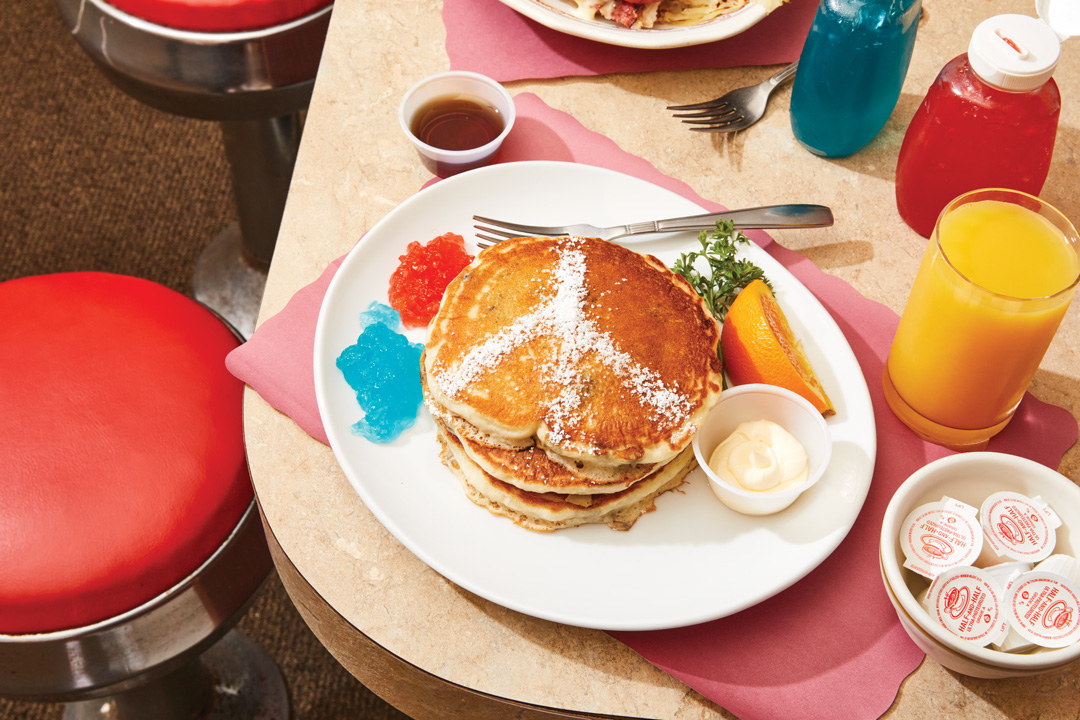 In March of 2019, Emma Wuillermin, a Paris-trained pâtissière, opened a bakery in the shed of a small Hammonton farm with virtually no signage or street presence. She’s known especially for her stunning special-order cakes, three tiers high, wrapped in flowers and gold. But on Saturdays (and only Saturdays!), she opens her place up from 11 a.m. to 3 p.m. to sell fresh-baked croissants with honeycombed centers, doughnuts bursting with salted caramel, and other beautiful pastries to people lucky enough to have found this spot. Follow her on Insta @farmhouseconfections for alerts on her Saturday pop-ups offering sandwiches with produce grown on the farm. 875 9th Street, Hammonton. 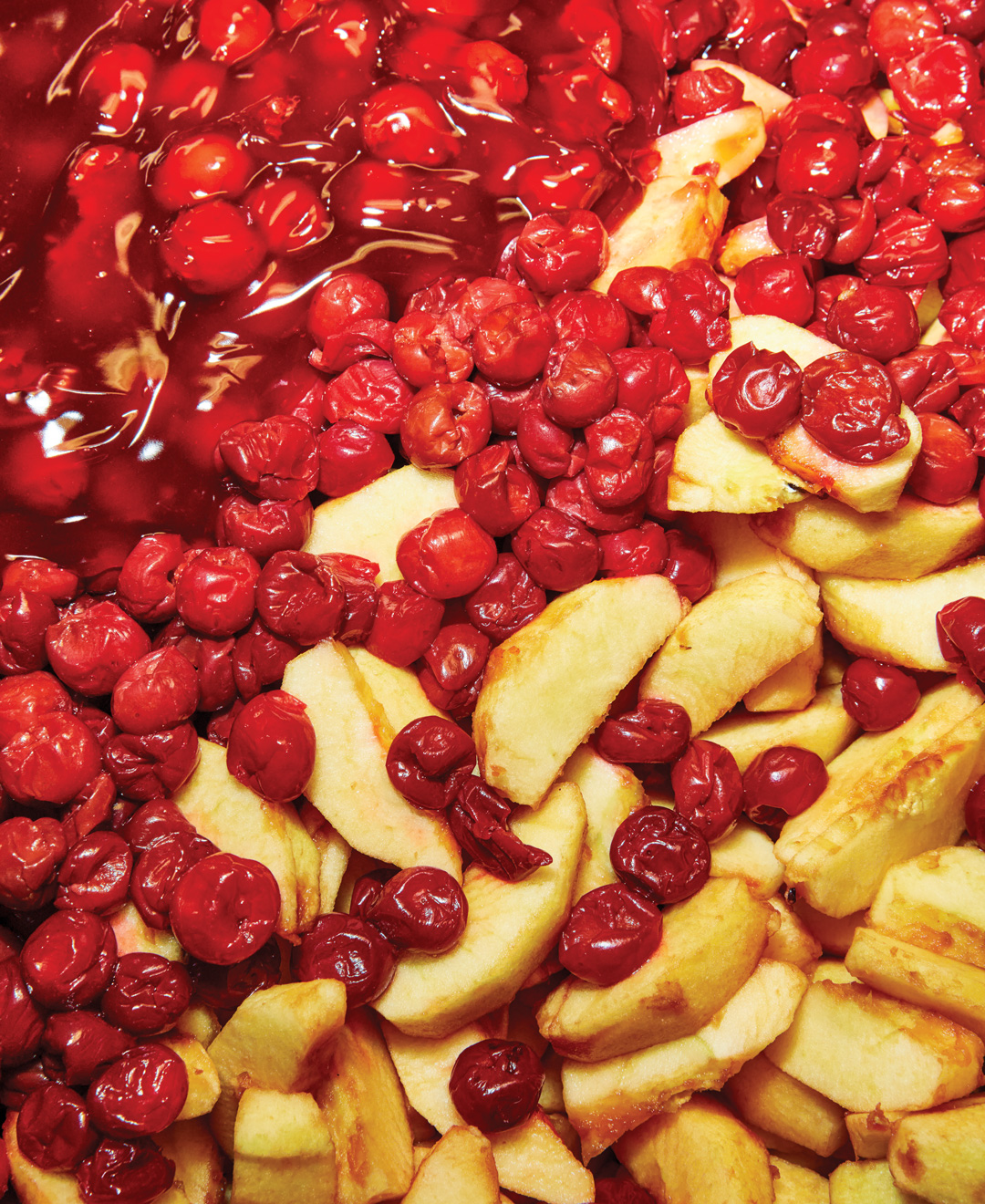 Fruit for pies at Red Barn Cafe in Hammonton. Photograph by Michael Persico

Stop into this picturesque spot inside, yes, a cozy red barn for breakfast or brunch (the quiches sell out early!), but whatever you do, don’t leave without a couple of the ­Instagram-ready seasonal pies — so beautiful, they almost look like props. And since this month is peak blueberry season in New Jersey, and since Hammonton is the self-proclaimed “blueberry capital of the world,” we think you know what to do. 391 U.S. Route 206, Hammonton.

The sign out front basically says it all: “Love, Peace and Bacon Grease.” This is where you go for hangover food after a long night in Atlantic City, or Philly, or wherever. ­Double-decker pork roll sandwiches. Creamed chipped beef. Homemade biscuits and gravy. You get the idea. Plus, there’s a lunch counter. Who doesn’t love a lunch counter? 910 West White Horse Pike, Egg ­Harbor City.

Sure, you could get the popular camel burger, the ostrich burger, the bison burger or the elk burger, but don’t worry: The regular beef burgers (Five Guys-style, but with killer buns and better toppings) are worth the detour, too. Bonus: milkshakes so thick, you’ll want a spoon. 195 South New York Road, Galloway.

Take a little turn off WHP onto Pleasant Mills Road in Hammonton, and voilà: You’re in the heart of blueberry farm country. DiMeo is a century-old family-run organic farm with all the berries you can pick — just call ahead and reserve a spot. (Same-day reservations are fine.) Cash only. 3101 Nesco Road, Hammonton.

Setaara opened its doors across from the iconic White House Sub Shop months before COVID arrived and forced diners outside. But the upscale French-Afghan restaurant seized the moment with a stunning open-air dining room that feels like a Moroccan palace hotel. The meticulously maintained courtyard, with its twinkly lights, seas of fresh flowers and starry views, is currently two tiers (a third level is coming) — and a breathtaking place to feast on lamb kebabs, pâté and escargots while sipping refreshing mint tea. 2322 Arctic Avenue, Atlantic City.

Published as “White Horse Pike” in the “On the Way to Cape May” guide in the July 2021 issue of Philadelphia magazine.