This Isn’t Easy for Philly’s Big Restaurant Groups Either

CookNSolo and Starr Restaurants came under fire for how they dealt with mass employee lay-offs during the coronavirus crisis. But maybe we need to cut them some slack. 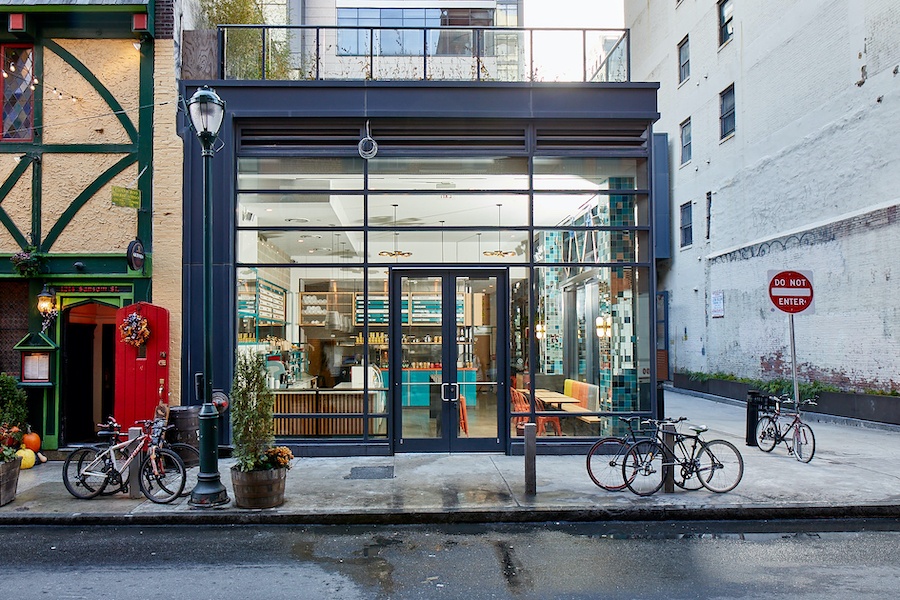 This week, two major Philly restaurant groups, CookNSolo (Zahav, Federal Donuts, Laser Wolf) and Starr Restaurants, came under fire for failing to pay out their laid-off employees’ accrued sick leave, a new stipulation under the city’s “Promoting Healthy Families and Workplaces Act” in response to the COVID-19 crisis. Under normal circumstances, paid sick leave is guaranteed to laid-off staff members working for companies with more than nine employees — but these aren’t normal circumstances.

On March 16th (the date of the government mandated shut-downs), the act was expanded to cover “accrued paid sick time for mandated business closures” during the COVID-19 risk. That same day, CookNSolo launched a gift card sale fundraiser for their hourly employees that brought in a whopping $110,000, not including $40,000 from the restaurant group’s founders, Michael Solomonov and Steve Cook. Still, a petition with over 1,000 signatures spread online calling on the restaurant group to pay their employees the sick leave they were owed. On March 25th, CookNSolo reversed course and complied with the emergency city regulation, regardless of the fact that paying out the sick leave would prevent their employees from filing for unemployment right away. Regardless of the fact that most restaurants in the city haven’t paid their laid-off staff their owed sick leave — because most of the restaurants in the city can’t afford to.

In Eater’s report, Stephen Starr says that his restaurant group, Starr Restaurants (which employed around 6,000 employees across 41 restaurants), first furloughed (read: temporarily laid-off) most of its employees when the government shut down dine-in restaurant operations across Philly. But when they realized how long it would be before they could reopen the restaurants, those furloughs turned into official lay-offs. As of March 25th, “hundreds of thousands of dollars are in the process of being paid out in sick leave,” a Starr rep told Eater. That’s in addition to Starr’s pledge of paying 100 percent of the insurance premiums for employees covered by the company plan. “It was a big investment,” said Starr, “and I was happy and proud to do it.”

Coronavirus has knocked Philly’s restaurant industry off its high-wire act. Those razor-thin margins that chefs and restaurateurs are always yelling about? They’re why owners need a tipped wage to pay their front-of-house employees. They’re why owners can’t provide most of their employees with healthcare. They’re why independent restaurant owners live paycheck to paycheck, weekend to weekend, without any nest eggs. Add a city-mandated quarantine to the equation, and the entire restaurant industry — the independently owned, award-winning restaurants that made Philly dining a worldwide attraction — plummets to its death.

“When we had to close down Sbraga for a weekend because of the Pope’s visit, it took us over a year to make that money up,” says Ben Fileccia, a former director at Sbraga Dining (now the Director of Operations at the Pennsylvania Restaurant and Lodging Association). “That’s how long it took us to recoup that weekend’s loss. [Having a restaurant group] just means you have more employees, more payroll tax, more rent. Everything just multiplies — but the profit margins are the same.”

Three days ago, in tears, Marcie Turney, who co-owns Safran Turney Hospitality (Barbuzzo, Little Nonna’s, Bud & Marilyn’s) with Val Safran, posted a video to each of their restaurants’ Instagram pages explaining the dire situation they’re in: “On Monday we had to close all 10 of our businesses at a moment’s notice. We had to lay hundreds of employees off. We have been scrambling trying to figure out what to do … We set up a relief fund for our hourly workers. It’s called the ‘Safran Turney Hospitality Relief Fund.’ If anyone would like to [contribute], we’d appreciate it. Val and I are putting in $50,000 to start it off. I hope we all get through this. We will, we’re a tough industry. But we need the help of the community.” 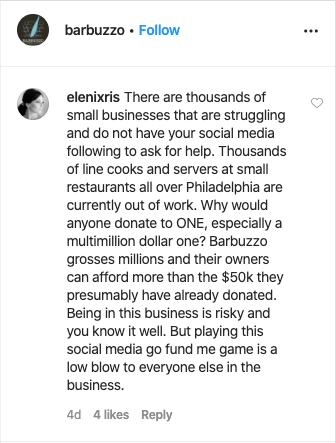 Is that where we’re at now? Is a $50,000 donation to your workers not a lot of money anymore in the restaurant industry? How about Steve Cook and Michael Solomonov’s $40,000? Is Stephen Starr or Michael Schulson paying for their salaried employees healthcare with their own personal dollars not a noble act of generosity? “We don’t know how long this is going to last,” says Fileccia. “We want these restaurant owners to have enough operating capital to be able to reopen. We’re going to have to relaunch this industry months from now. That’s a huge endeavor. We know that 25-35 percent of restaurants aren’t going to reopen or make it through 2020. I think it’s short-sighted for folks to expect these restaurant owners to come up with the cash.”

“The reality is that we’re still a cluster of small businesses,” says Turney. “The whole is equal to the sum of its parts in this case – it’s not greater or lesser in terms of revenue, which I think is a common misconception. Creating a group name didn’t catapult us into a new stratosphere of profit. With each opening, we incur new debts and bills. It’s not like having a bulk of businesses saves you money and increases gains in the hospitality industry. The margins are so slim and we’re really not cut many breaks. In fact, people want to cut you less breaks because there’s an assumption you’re ‘rolling in it.’”

That’s not to say that restaurant groups in Philly aren’t better positioned to come out of this crisis alive than, say, your local taqueria or some chef-owned BYO. Multiplying your businesses means multiplying your profits, which means the owners of these groups may have the luxury of cash reserves most independently owned restaurants don’t.

But it also means multiplying all the dystopian troubles all restaurants are faced with right now.

Steve Cook told Eater, “If I had to go back and do it again, I’d have taken more time. Our intentions were good.”

Maybe, right now, when things are as dire as they are, when every restaurant in the city is flailing to survive, when there’s no clear path forward, intention matters just a little bit more.