One Last Supper Before the Restaurants Went Dark

Just last week, the reality of coronavirus still felt distant. And then, all of a sudden, it wasn’t. 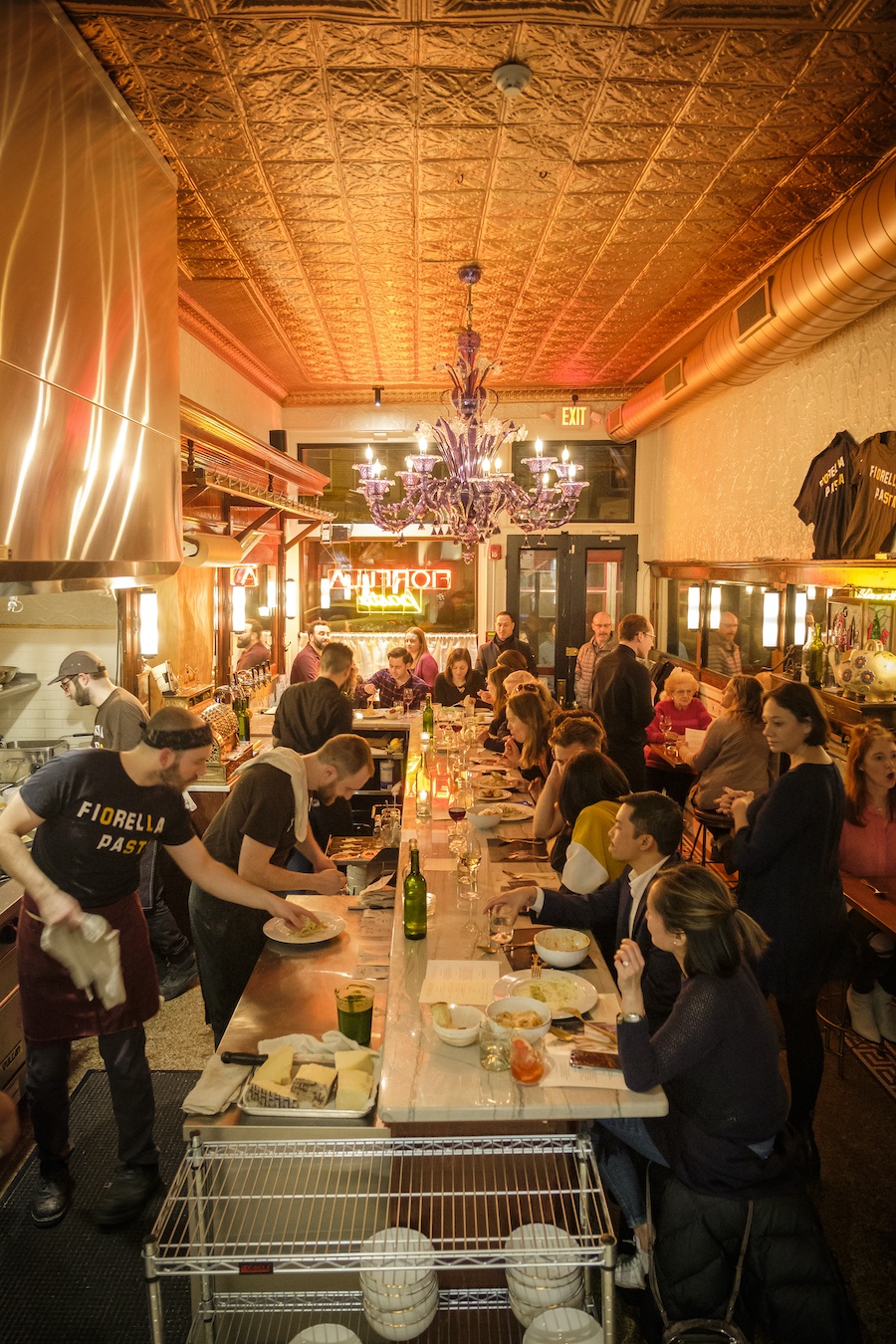 Right as we broke free from the sticky clump of people waiting outside Fiorella, my phone lit up: “Your estimated wait is 115 minutes.”

Only a few hours after Donald Trump called the coronavirus pandemic a national emergency, the sun set over Christian Street last Friday as Fiorella’s soon-to-be diners passed the time drinking cold Italian wines, their faces lit bright red by the glowing neon in the front window. Every so often, you’d hear the word said out loud, but a big laugh or the clinking glasses of a toast would stop it in its tracks. Inside, the 14-seat bar was packed. The few deuces scattered in its orbit were fully occupied. Even just a month ago, this neighborhood — especially this part of the neighborhood, near the Italian Market — would be dead quiet after 5 p.m. But this particular Friday happened to be the second weekend of Marc Vetri’s newly opened weekends-only (plus Thursdays) pasta bar, and it was as busy, inside and out, as the place would probably ever be, despite the quiet hum of panic floating in the air.

My partner and I went to Fiorella that night because just a few days before, the director of communications for the Philadelphia Department of Public Health gave us the go-ahead to go to restaurants. We assumed it would be a quieter night, given the circumstances, but no such luck. We had 115 minutes to kill, so we took a walk.

We passed rowhome windows that muffled the sounds of house parties. We walked through a Friday night on South Street that was indistinguishable from all other Friday nights on South Street. We walked into Le Caveau, the newish bar above the Good King Tavern, and were met with a busy scene that got busier by the minute. We ordered a pét-nat — as one does at Le Caveau — and a riesling-chardonnay blend, because those grapes don’t normally hang out together. Le Caveau likes to showcase the wild and weird corners of the wine world, and since this was — at least on its face — just another ordinary night at Le Caveau, we ordered the wild and weird. Chloé Grigri (the owner) was there, as she always is, and she came by to say hi. She was nervous, of course. Said it was slower than usual. Said this was a sign of things to come.

A few minutes later, after an influx of new guests, she came back, relieved: “Okay, it’s back to normal.”

My phone lit up. Our table was ready.

We assumed it would be a quieter night, given the circumstances, but no such luck.

There have been very few times in my Philadelphia food-writing career that I felt the static electricity of a dining room from the front door. Bing Bing’s opening night on East Passyunk was one I’ll never forget, and my first trip to Pizzeria Beddia is a recent example. This night at Fiorella felt the same. Dad rock blared from the speakers; cooks behind the bar were sweating it out, trying to keep up with the pace of the night. The room buzzed with the cheap thrills of eating Marc Vetri’s food so mindlessly, so casually. 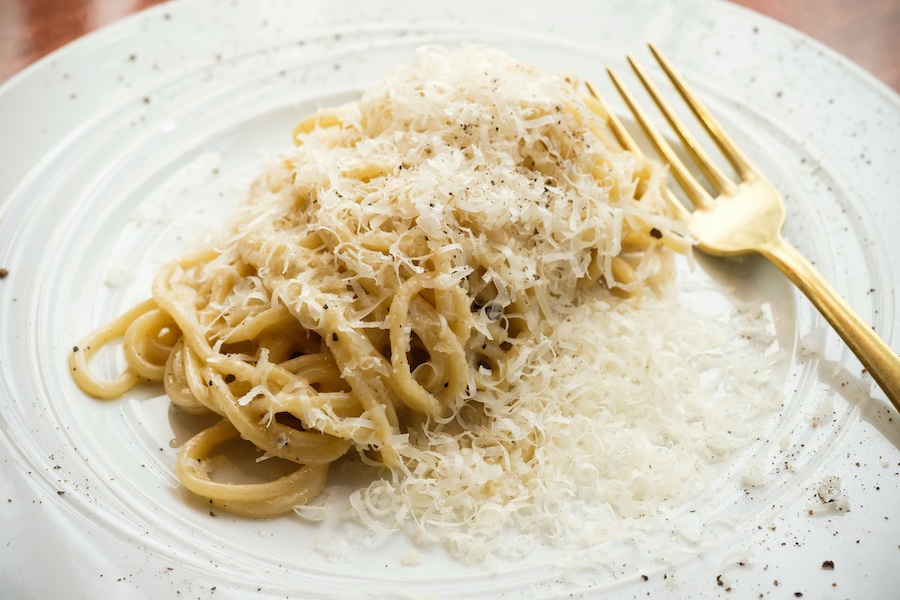 Braised artichokes, ripped apart and scattered over the guts of burrata cheese drizzled in olive oil. A pile of ricotta gnocchi, soft as cotton candy, with fried leeks and brown butter. A plate with one long sheet of pasta dripping in almond pesto, and another with a nest of cacio e pepe that would’ve made Hugh Hefner blush. I chronicled every plate on Instagram Stories — which, in retrospect, was irresponsible.

The entire weekend, restaurants posted about their sanitation standards on social media — how they were taking every precaution necessary to keep their guests happy and safe. Our feeds were flooded with promises and desperation. Center City was horrifically, tragically flooded with St. Patrick’s Day bar-hoppers. Restaurants and bars weren’t just open; they were packed. Because of course they were. There are bills to pay, staff members to answer to, mouths to feed.

See, this industry is propped up on an incredibly weak foundation. A foundation so weak that on days when pandemics aren’t sweeping the nation, it essentially requires business owners to ask its customers to pay their employees (i.e., the tipped wage). So weak that most of its workers don’t have access to health care. So weak that a poorly written Yelp review is still a very real fear. So weak that during this crisis, many businesses couldn’t close even if they wanted to, for insurance reasons: “There are benefits and programs in the pipeline that may be compromised if we don’t keep limping along until the bitter end,” chef Tyler Akin wrote in a heartbreaking Instagram post. So weak that it had owners publicly begging the Philly government for mercy, before the government finally gave in.

“Here is the reality,” Akin wrote in his Instagram post. “We as a restaurant community are … coming out of a weekend during which we all intended to take the temperature. Fighting for scraps, entertaining curbside only, etc. It wasn’t great. Those among us who maybe came close to projected sales are still wondering what’s next. Was this the last supper?”

Fiorella is temporarily closed now, as are so many other restaurants in Philly. Some have turned to takeout and delivery only, but the city’s restaurant landscape will, without a doubt, look very different when this is all over.

So as we continue to trudge through this uncertain restaurant future together, I plan to take with me the moments from the Before. Moments I’ll never forget, like the pleasant zap of the chardonnay-riesling at Le Caveau. Or my first bite of the ricotta gnocchi. Or when I saw one of the cooks toss Marc Vetri’s noodles (hand-rolled; made of flour that was milled in-house) in a pan, turn around, and slap them onto a guest’s plate like it was nothing at all.

Or the Lysol disinfecting wipes container proudly on display behind the bar, somehow drawing more attention that night than the pasta itself.