Barbecue has never really been Philly’s thing. But perhaps that’s changing. We caught up with three new pitmasters, who take their ’cue seriously. 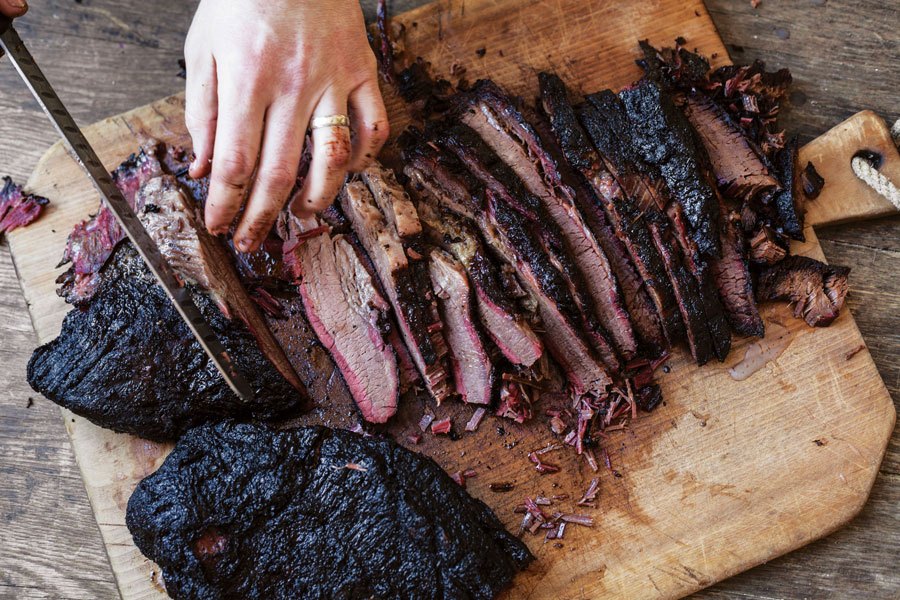 There’s new hope for Philadelphia barbecue, thanks to things like this brisket at South Philly Smökhaus. Photograph by Jackie Botto

Bok, 821 Dudley Street, East Passyunk
Pitmaster: Eric Daelhousen
BBQ style: All kinds
Equipment: Custom-designed offset smoker by Gator Pit of Texas, made in Houston.
Wood: White oak (from New Jersey)
Known for: Beef n’ Cheddar Melt
How it’s made: The brisket is from Passio Prime (located inside the restaurant) and gets a 24-hour rub (“with some special spices”) before being smoked for up to 18 hours. Daelhousen slices the product to order and drapes it atop a Machine Shop Boulangerie bun with cheddar, pickled onions, and a house creamy horseradish sauce.

1703 South 11th Street, East Passyunk
Pitmaster: Michael Strauss
BBQ style: All kinds
Equipment: J&R Manufacturing’s Little Red Smokehouse, which set him back $24,000.
Wood: Mix of white and red oak (from Pennsylvania), which, says Strauss, “burns hot and clean.”
Known for: Texas-style brisket
How it’s made: Smoked for at least nine hours, then rested for about four hours — “The longer the rest, the better,” says Strauss. Pros know to ask for the “burnt ends” (the juicy, flavor-packed tail end of the brisket).

The Lucky Well at Spring Arts

990 Spring Garden Street, Callowhill (coming soon)
Pitmaster: Chad Rosenthal
BBQ style: Leans Memphis
Equipment: Southern Pride out of Tennessee
Wood: Hickory, when it’s available. “It’s stronger and less sweet than oak,” says Rosenthal. “I like my wood like I like my whiskey — with a bite.”
Known for: St. Louis pork ribs
How it’s made: Pork spare ribs sit for two days in a dry rub made from a proprietary blend of 15 spices, then are smoked for four hours, painted with just a bit of BBQ sauce (“for a little caramelization”), and finished on a charcoal grill.

Published as “BBQ Town” in the March 2019 issue of Philadelphia magazine.