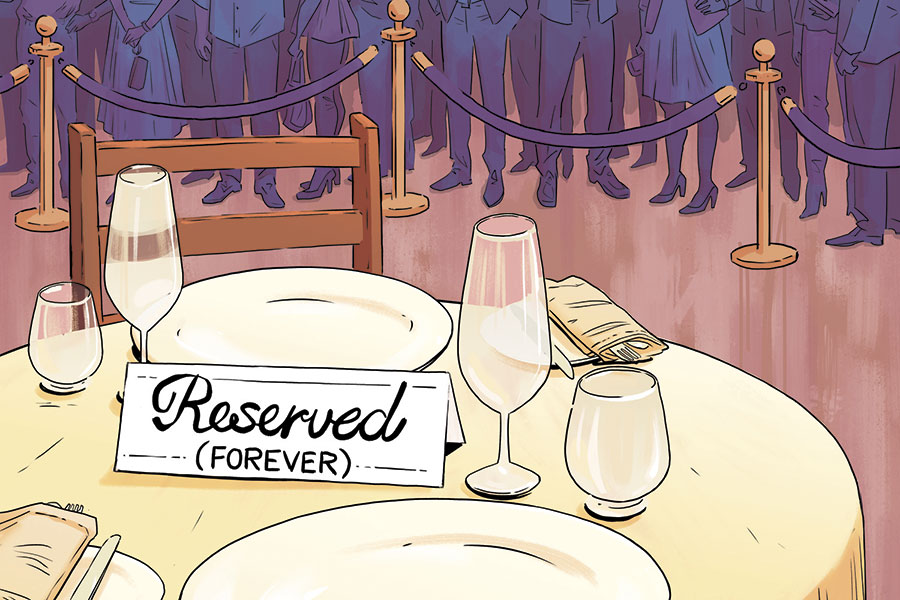 By the 15th course, we all started looking pretty dumb — nine of us, slack-jawed, watching Jesse Ito push slivers of fatty bluefin tuna (flown in from Spain) into pudgy nubs of rice and then top them with brassy beads of osetra caviar. Course 16 was made up almost entirely of shaved white truffle. The only thing that tethered us to consciousness was the reserve sake we were reminded to sip between courses.

At $130 a pop (not including drinks), Ito’s sushi omakase at Royal Izakaya is a decadent experience. A conversation piece. A once-a-year kinda deal.

The woman sitting to my right told me she was filling in for her friend, who has a standing reservation at Royal. (Rather than cancel, he gives out his seats, as if they’re season tickets at the Linc.) In fact, everyone except us that night had standing weekly reservations. They’re regulars, indulging in an 18-course Meal of a Lifetime pretty much every Thursday.

I know another woman who had a reservation at Bibou every other week for eight years — she only gave it up when she started wintering in Florida — and a couple of people who go to Laurel every month. These special-occasion restaurants have become dens for regulars. Some are folks from the neighborhood who were fans before these places went all Tasting Menu on them — before the James Beard noms and Bon Appétit spreads. Others have made these places their regular joints despite all that. “We can all stir ourselves a martini at home,” says Saxby’s CEO Nick Bayer, a frequent flyer at Vernick. “But we go out to these places because we want to be around people who are excited to see us. People who know our name.”

The thing is, we’re all eating out more than we used to, and if you have extra money in your pocket, you go to Laurel any chance you get. “There is wealth everywhere in this city,” says Nick Elmi. “And people want to spend their disposable income on good food.”

And they want to feel comfortable doing so. These days, the places that are most special have maintained the soul of a neighborhood joint. Nick Elmi, Marc Vetri, and Greg Vernick? They’re still behind the stove, because the most impressive thing a restaurant can be in Philly right now is intimate. A place where the chef knows your name and turns out plates seemingly cooked just for you. Like Dirty Franks, but with foie.

Published as “High Frequency” in the September 2018 issue of Philadelphia magazine.