It's the same thing every year at every Super Bowl party. We're here to help you do better. 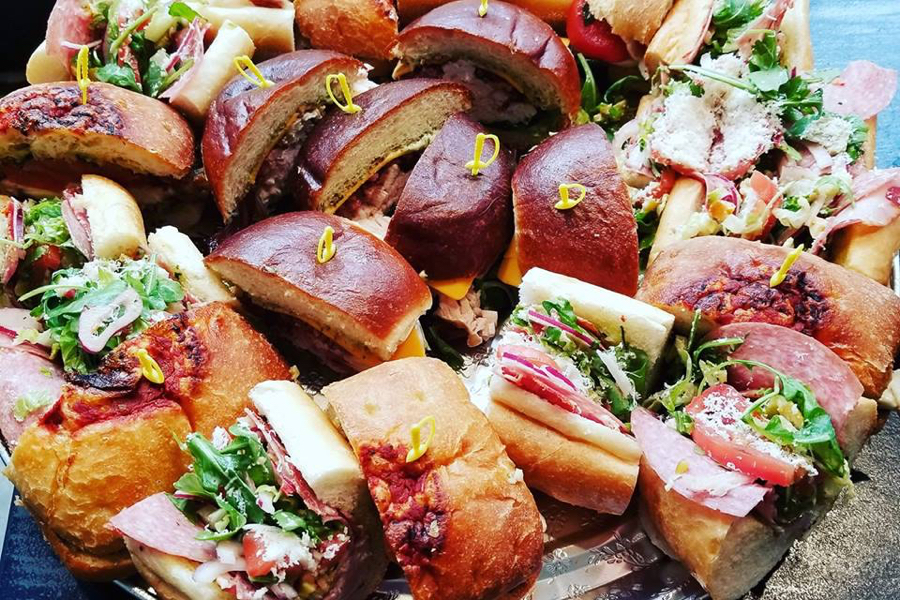 You know what you should absolutely be serving on Sunday for your Super Bowl party? Hawaiian food.

No, hear me out. We’re talking pork, rice, noodles, fried things. Not really all that much different than what you’d normally have on the table for the big game.

Wait, you know what would be even better? How ’bout fried chicken? I know, I know… It’s easier just to call for a few pizzas and some wings from the place on the corner, but what if you could have the fried chicken delivered? Brought right to your football cave on game day, making you the hero of Super Bowling because you were the one who thought to order fried chicken for all your friends.

There are a LOT of options available to you this weekend that go beyond the standard pizza-and-wings-and-chips-and-dip-and-maybe-a-tomato-pie-if-I-remember-it plan that’s held you for the past few Super Bowls. But this one is special, right? This one means something. So maybe it’s time to up your snack game a little with something new.

Don’t panic, though. We’ve got you covered. Here are a few of our favorite places to get you started.

So this one is pretty standard, but if you’re gonna go the sandwich route anyway, why not pick a place like Woodrow’s that a) makes some of the best sandwiches in the city, and b) can put together hot trays so that your friends can build their own roast pork sandwiches during the commercial breaks? For $70, Woodrow’s will do a half-tray of roast pork, rolls, broccoli rabe, long hot aioli and sharp provolone that’ll serve between 10 and 15 people. They also have options for meatball subs, brisket and what they call “PBR-becue pork” with potato rolls, pepper jack and crispy onions. And for those of you out there who don’t want to build your sandwiches by hand, Woodrow’s also has everything from cheesesteaks to po’boys available as platters. 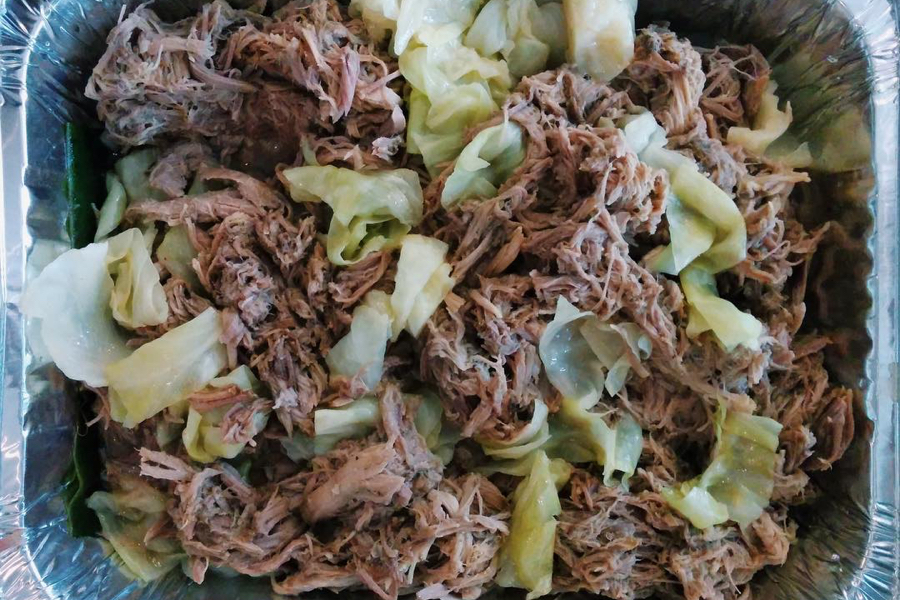 I swear, you wanna turn Sunday into a party? Or more of a party than it’s already going to be? Then give the crew at Poi Dog a call. They do pan catering, dishing out portions big enough to feed 10-15 people, plus desserts and musubi. And while it might seem a little counter-intuitive, what we’re really talking about here are big pans of smoked pork or chicken with noodles and some excellent, simple mac salad on the side.

Because look, if you’re going to do a party right, you may as well just go and get a whole pig, right? Right. And we’ve got two options for you. First, there’s Esposito’s, which has been doing Italian porchetta pig roasts for damn near ever and can supply you with anything from 30 pounds up to 170 pounds — which, they say, ought to be enough to feed your entire block. And then there’s 13th Street Kitchens, which is a catering operation that combines the talents of four restaurants (Cafe Lift, Bufad, Kensington Quarters and Prohibition Taproom) into one menu. In addition to all the normal catering stuff (sandwiches, salads, some really good looking snacks, trays of pasta, plus pizza and wings if you really want to go in that direction), they, too, offer whole roasted pig, priced by the pound and meant for sandwiches. It comes with seasonal veggies, rolls and sharp provolone. Oh, and also, they do breakfast (with 48 hours notice), so if you’re planning on kicking your party off early this year, maybe give 13th Street a call. 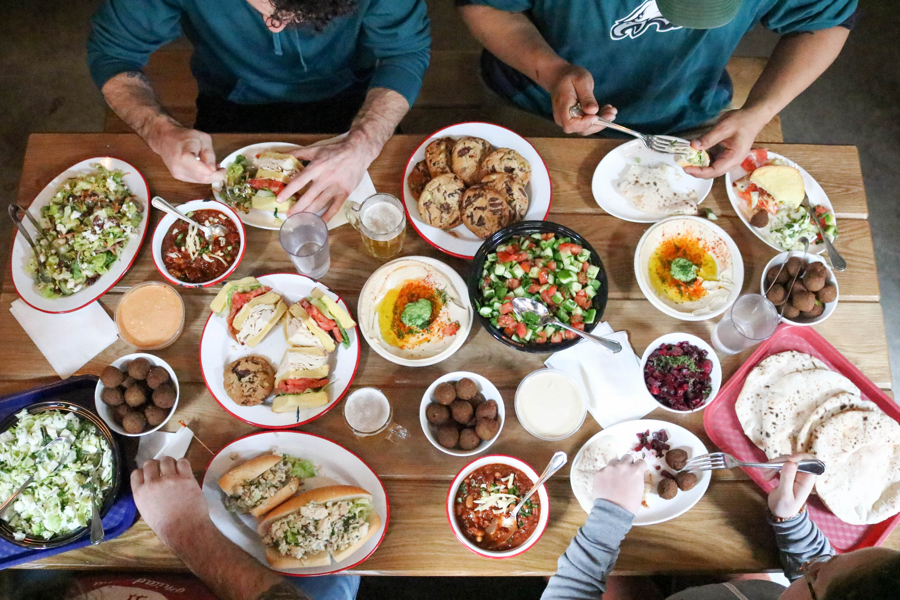 And now, maybe some vegetables

Now I’m not recommending this, but if you’re looking to do a vegan Super Bowl party, there’s really only one place to call. Miss Rachel’s Pantry can handle just about any vegan request, but they’ve also got a full-on vegan Super Bowl menu designed just for the big day. They’re calling it “Iggles Nosh” and it’s an a la carte menu that has to be picked up at the Pantry on Saturday, February 3rd, between 10am and 4pm. There are several options, including BBQ pulled seitan, cheesesteak empanadas (made with seitan), and seitan chili–plus queso and a spinach and artichoke dip.

Oh, and speaking of vegan food, check this out: Dizengoff and Goldie are teaming up to offer catering trays of Diz’s hummus and falafel from Goldie, along with beet salad, Israeli salad, cabbage salad, two kinds of tehina and pitas. It’s enough food for 15-20 and will run you $150. Call for more details.

Not to be left out, Rooster Soup Co. is also doing a Super Bowl package of sandwiches, salads and cookies. Simple stuff, but there if you’re interested, or if you’re a huge Rooster fan.

Revolution Taco has a special Super Bowl deal which basically lets you set up a DIY taco bar in your home. It includes proteins, lots of toppings, sides if you want them, options for burritos and empanadas. All you have to do is call Revolution Taco to order then make your own plans for the DIY margarita bar to go next to it.

Fried chicken all the way

Okay, so I’m still thinking that a Super Bowl party full of fried chicken is the best idea I’ve had all day, and there are several options available to you. First, there’s the brand new Redcrest Fried Chicken which is doing a Super Bowl special through GrubHub where you get a free large side when ordering any fried chicken meal. Plus, they’re taking pre-orders for in-store pick-up if you’re planning on dropping more than $100 and want your chicken dinner to be guaranteed available by game time. Love & Honey Fried Chicken is getting prepped for some big game day orders, and they’re offering pick-up or delivery through Caviar on Sunday for large orders, provided you get your order in by Friday.