Eat This Now: He Fen Noodles at Danlu

Patrick Feury's best version of Taiwanese (and Chinese) comfort food is worth checking out. 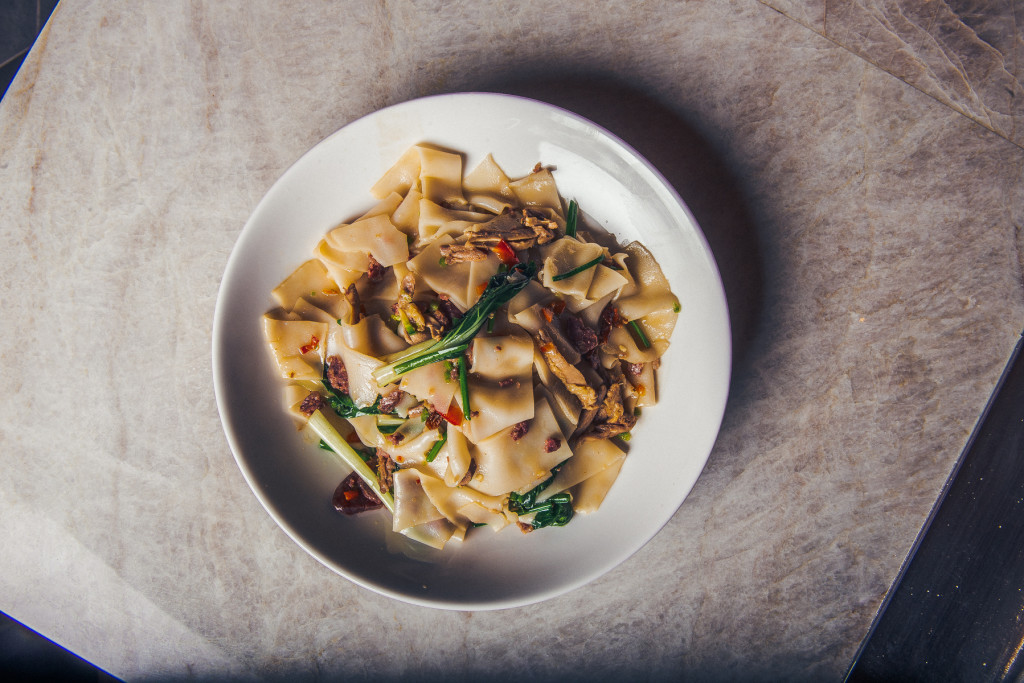 If I’m being honest, I wasn’t expecting a lot from Danlu. There was just something about it — the location, the space, the time it’d taken to come together — that bothered me. It was too pretty. Too composed, especially for a place claiming to serve street food. Everything about Danlu was so high-gloss that it instantly made me suspicious.

And then I tried the he fen noodles and realized how ridiculous that was.

He fen is some serious Asian comfort food. They are long, flat rice noodles that basically have to be made fresh because they don’t store or freeze well. In that way, they’re kind of like Chinese pappardelle (except not really at all) — the noodles the kitchen has to make every day; that they use to show off their best, freshest ingredients.

Also like pappardelle, they’re used as the base for all sorts of stuff. Big chunks of meat and decadent sauces on good days, leftovers and scraps on bad ones. In Americanized Chinese restaurants they’re the noodles on which all chow fun dishes rest (“chow fun” being a transliteration of “chao fen,” essentially meat over rice noodles). And Feury and his partners — particularly Michael Wei, who grew up in Taiwan and therefore understands this dichotomy — did something really smart with their version, creating a dish which perfectly straddles the line between high and low, modern and traditional. The entire team traveled to Taiwan while researching the menu for Danlu. They hit night markets and restaurants, plenty of food stalls. They ate lots of he fen.

And Danlu’s version combines the wide, flat, slightly chewy noodles with perfectly cooked slices of slightly sweet and smoky duck breast, crumbly Taiwanese sausage, Chinese broccoli and a thin, brown sauce spiked with pomegranate that clings perfectly to the noodles. The problem with cheap chow fun is cheap noodles, and the problem with cheap noodles is that they get slick and kind of bloated when cooked — everything that touches them just slides right off. These noodles do not have that issue.

It is a dish that hits all the buttons of comfort food. It is warm and filling. It smells delicious. Yes, it needs a little spice (not sriracha, ask for a side of the red chili oil/paste they have in the back), but the flavors are all there — salty and smoky and sweet. It is as basic, traditional and soothing as any dish could be.

And it is lovely, which is the risky thing that Danlu did. Granted, we’re living in a time when fried chicken makes the covers of glossy food-porn magazines and riblets are being treated like fine dining, but it was still surprising to me. In these shiny surroundings, served in a shallow white bowl, eaten with fancy and hand-picked silverware, tasting something like this was not what I expected.

If Danlu served their he fen in a tall styrofoam go-cup with a pair of disposable chopsticks taped to the side, I’d eat it every day. If there was some hole-in-the-wall serving this in one of those white plastic bowls with the blurry red-and-blue Chinese designs on the bottom, I’d say that it was as good as any I’d ever tasted. In Danlu’s case, it is the fancy surroundings that are distracting. The juxtaposition of luxury and comfort is surprising, just don’t let the trappings throw you.