Your new favorite cookie is actually made of pretzels. 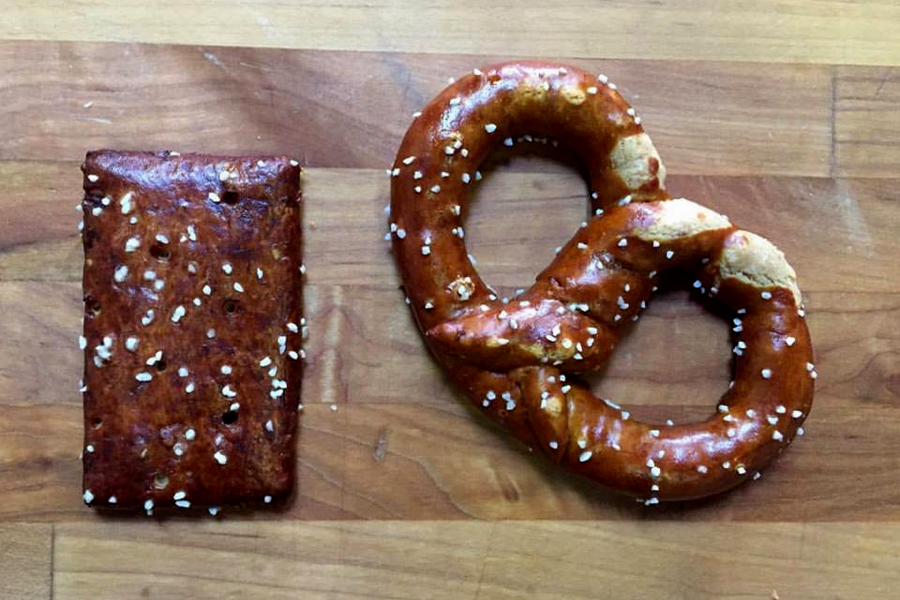 When Foobooz reported earlier this year that James Beard Award-nominated baker Alex Bois — the microbiologist-turned-baker who built High Street on Market’s acclaimed bread program — would be opening his own bakery in Kensington with the folks at FCM Hospitality, we were really excited.

There are few things we at Foobooz loves more than carbs, and Bois does them best: From pillowy potato bread to a deep red rye-beet loaf, he creates bespoke bread like no other, milling locally grown grains in-house and leavening loaves with old-school fermentation techniques.

Bois is also intent on reducing waste, which is often a big part of the baking world: Breads are made in big batches, sometimes there are leftovers, that bread is no longer fresh — and the next morning, the cycle begins again. Bois is breaking that cycle by turning today’s unused breads and baked goods into the basis for tomorrow’s batches.

That’s where the pretzel shortbread cookies come in. They contain not just white and wheat flour but also Lost Bread Co.’s leftover soft pretzels. Once they’re past their prime (but still good to eat), Bois processes them into fine crumbs. The crumbs are tossed with toasted sugar and added to a sweet, buttery shortbread dough.

The cookie is finished like a pretzel, too: A dip in lye gives the cookies that burnished, golden-brown pretzel glow. That also allows the pretzel salt — the finishing touch — to adhere to their surface.

The result is a buttery cookie with that dense, sandy shortbread texture and a sweet-salty-malty flavor that definitely tastes like pretzels. Bust them out with tea and clementines for a wintry midafternoon snack, or skip the cooking and be the star of your office potluck by bringing in a few bags to share. They’re also the perfect size and price for any bulk gifting — coworkers, teachers, relatives — you may have on your list this year.

Luckily, Bois and his team will keep making these cookies well past the holiday — for as long as they have pretzels to recycle.

You can get Lost Bread Co.’s pretzel shortbread cookies at the bread counter at the Craft Hall pop-up on the north side of City Hall from 11 a.m. until 9 p.m. seven days a week through December 23rd. They’re also available at Riverwards Produce in Fishtown and Di Bruno Bros. shops in Rittenhouse and The Franklin.