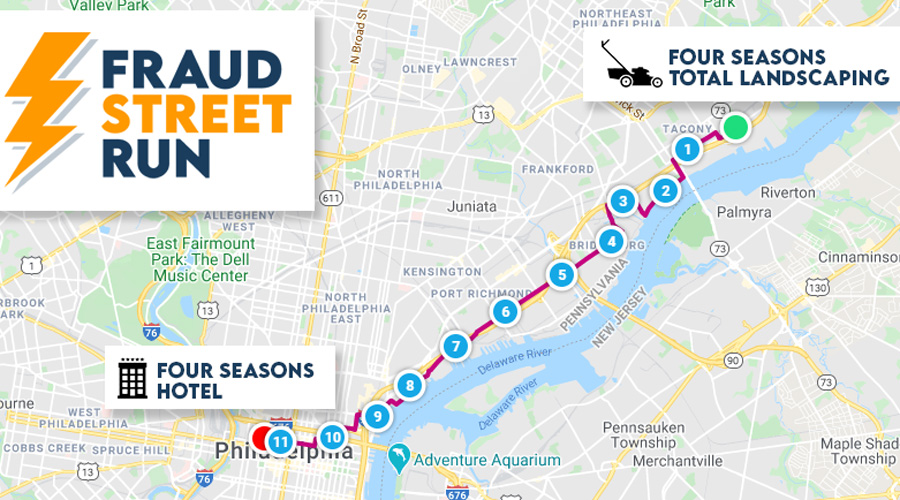 But you know what was a moment we won’t forget? A moment of poetic justice so absurd, we can’t help but laugh? (And keep laughing, maybe forever?)

The Four-Seasons-Hotel-Four-Seasons-Total-Landscaping mixup. (ICYMI, the Trump campaign booked the landscaping business for a press conference, which maybe would have been fine had President Trump not mistaken it for the swanky hotel, then tweeted the location out to his 88.9 million followers.)

Local marathon runner and Junk Miles With Chip & Jeff podcast co-host Jeff Lyons was chatting with friend and running coach Gerard Pescatore on Twitter when the idea for the run came to him.  “We just ran together on Sunday and I thought it would be fun to run to Four Seasons Total Landscaping and then a light went off … why not start or finish it at the Four Seasons Hotel?” says Lyons. “What Giuliani did was so crazy and hard to grasp, and with Trump bad-mouthing Philly, I thought it would be fun to turn it into something positive and raise some money for a good cause.”

Using the Map My Run program, Lyons says sketching out the 11-mile route between the two Four Seasons was easy. Now anyone can test out the route on Sunday, November 29th, when Lyons is hosting (and Junk Miles is sponsoring) the aptly-named “Fraud Street Run,” which will have a masked, socially-distanced version for those who want to run with others as well as a virtual option. While it’s a “100 percent unsanctioned run: no fees, no awards, no aid stations,” Lyons is asking that anyone who participates donate $10 or more to Philabundance and share their run selfies with the hashtag #FraudStreetRun.

Interested in joining and commemorating the ironic moment? Head over to Junk Miles’ website for more info and a link to donate.