Meet the Philly Nonprofit Behind Those Viral Dancing Mailboxes

As Philly fought for the count of all mail-in ballots in Pennsylvania, a set of well-crafted mailbox costumes caught the attention of the internet. Creator Spiral Q has a lot more where they came from. 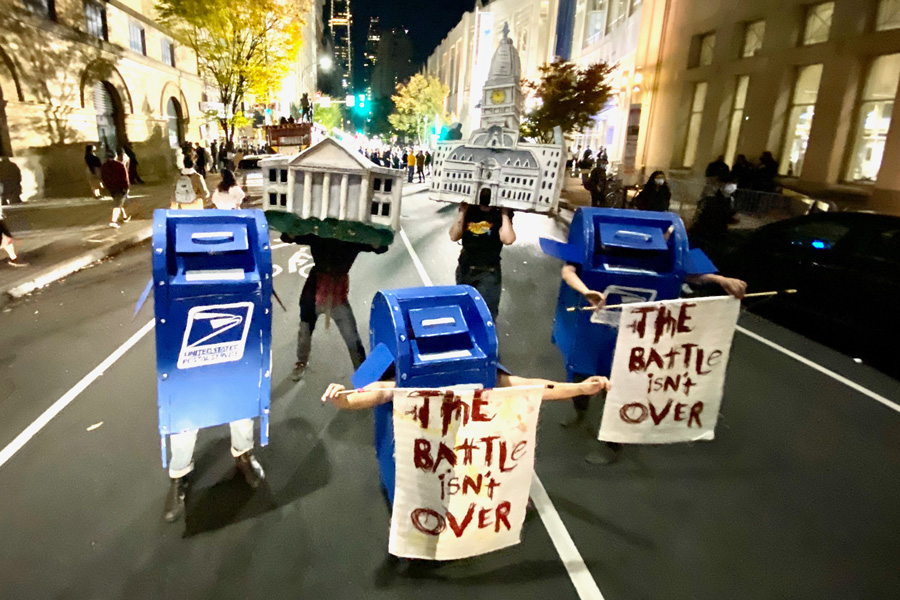 If you were paying any attention to social media late last week (I mean, who wasn’t?), you probably saw them: three impressively realistic-looking USPS mailboxes dancing in the streets of Philly. They showed up at the “Count Every Vote” demonstration-turned-dance-party on Thursday evening and quickly went viral.

After spotting the mailboxes — not to mention the impeccable Philadelphia City Hall and White House models that were grooving alongside them — we had questions. Where did they come from? Were these a last-minute creation, or did someone just happen to have mailbox costumes lying around? Why are they 1,000 percent nicer than most protest banners, signs and outfits (and any costume we’ve ever worn, for that matter)? Does the USPS have a mascot we don’t know about?

As it turns out, all of the above could be answered by Philadelphia nonprofit Spiral Q, the company behind the cardboard and papier-mâché wearable mailboxes and landmark buildings. Over the past two and a half decades, Spiral Q has created more than 2,000 works of art, ranging from giant puppets to dancing mailboxes to banners used to amplify the movements and messages of marginalized communities.

According to Spiral Q co-director Jennifer Turnbull, the 24-year-old organization was founded during the HIV/AIDS epidemic by Matty Hart, who “decided that he was going to take the art form of giant puppetry and street theater to the streets in advocacy for folks living in and working with AIDS and HIV.”

When this year’s contentious election rolled around amid the pandemic, the organizers decided to use their art and community-focused activism to inspire people to vote by mail. In September and early October, Spiral Q put its years of puppet-making expertise to good use and built the three blue mailboxes to promote voter registration (in partnership with Vote That Jawn) and to use in a voting tutorial video on their Instagram. The City Hall and White House puppets were actually built a decade ago, for Spiral Q’s annual Peoplehood parade, which celebrates the city’s diversity. (This year’s in-person parade was canceled due to COVID-19.)

In a year when the USPS has been at the center of the fight for democracy and the White House, dancing mailboxes may have been perfectly primed to go viral — especially when all eyes were on the mail-in ballot count in Philly.

Once voter registration and the voting itself were over, Turnbull says, Spiral Q thought the need for mailboxes would go away, too. But as the controversy over counting ballots continued, she adds, “My co-director, Liza Goodell, was like, ‘We should be out there! We should be out there!’ And I was like, ‘Go out there! Do it!’ And so we collected a group of our artists and folks to come out and represent and have a good time at the Convention Center.”

While Turnbull couldn’t have predicted the viral moment the mailboxes would inspire, she does believe in the power of big, noticeable artwork to amplify important messages. “Art is intrinsic to humanity. It communicates across language barriers, across cultural barriers. And for the past 24 years, Spiral Q has been utilizing public space and giant art so that people can see it from far away. You can’t not see and be attracted to the spectacle of it,” she explains. “And because of the way that pageantry works, it allows for hard things and complex ideas to be simplified and to be presented. I would parallel the way a pageant and puppetry can communicate and express to the way that Neil deGrasse Tyson breaks down physics for the public.”

The mailboxes were perfect for bringing attention to the pro-vote-counting movement here in Philadelphia, and they also brought visibility to Spiral Q — an organization that Turnbull says isn’t always the best at getting its own name out there. That’s partially because they’re always so busy helping other organizations to amplify their messaging. For weeks leading up to election week, Spiral Q was helping create art and banners for and giving studio space to organizations and individuals like Sunrise Movement, Count Every Vote, Black Voters Matter, and Donna Oblongata (the artist behind that giant eagle you may have spotted this weekend).

“It’s kind of like winning the lottery, because the work we do is essentially to lift up everyone else and all of the folks that we’re working with and our marginalized communities,” says Turnbull. “And we’re not so great at lifting up ourselves, and every time we try, it’s like, oh, that’s your marketing budget. But we don’t have a marketing budget. We have a ‘Get out there and do the work because you have to, because it needs to be done, and because the importance of it really lives in our bones.’ So I was like, ‘IT’S HAPPENING! We’ve got some visibility!’ We’re so excited.”