Nick Casselli shares a bit of the turmoil inside the post office under new leadership. 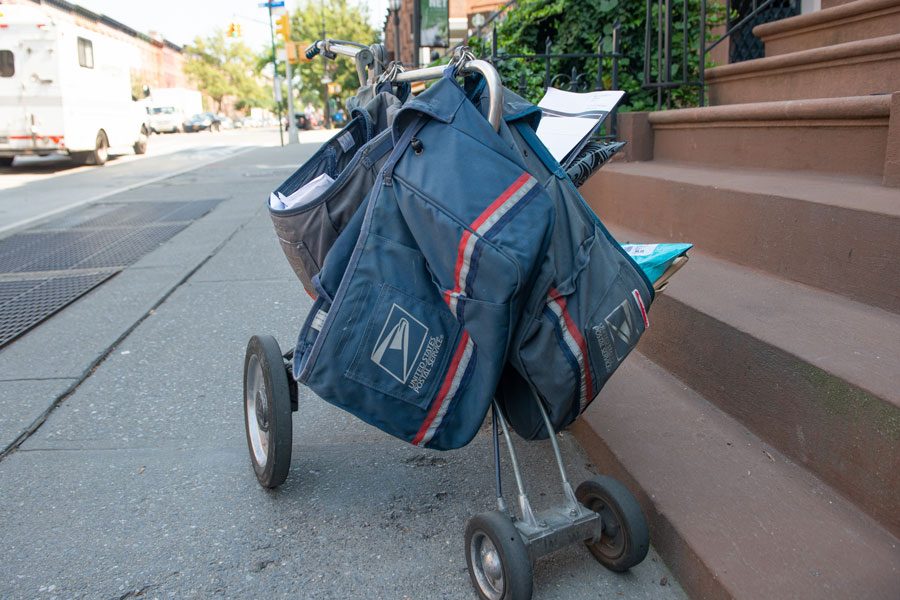 The United States Postal Service has been at the center of an ongoing controversy surrounding mail-in ballots and voter suppression ahead of the general election this fall. Following the appointment of Louis DeJoy — a President Trump campaign “megadonor” — as the new postmaster general, the federal agency has seen a flurry of changes that led to budget cuts and massive delays.

Many had theorized that disrupting the postal service and refusing to offer the agency a $25 billion coronavirus aid package was Trump’s back-door way of preventing widespread mail-in ballots in November. But on Thursday — in a very Trumpian move — the President came out and told Fox Business’s Maria Bartiromo that, yeah, preventing universal mail-in voting is exactly what he’s trying to do.

Earlier this afternoon, under pressure from Democrats and civil rights groups, DeJoy announced that he will pause the cost-cutting measures — at least until after the November election. But to get a better idea of how all the changes under DeJoy have been affecting our local postal workers, we chatted late last week with Nick Casselli, the president of a Philadelphia American Postal Workers Union.

So obviously a lot is happening in your world. Can you share with me some of the big changes you’ve been seeing?
Back in March, the United States Postal Service experienced — just like every business or company in the United States — the pandemic. Mail volume dropped to an all-time low. A lot of our members came down with the virus or were in contact with someone and had to quarantine. We recovered. But now we’ve run into another major stumbling block and that’s the appointment of the new postmaster general, Mr. DeJoy. He took over around eight weeks ago. He was appointed postmaster general of the United States by the Board of Governors. The Board of Governors are [mostly] appointees of President Trump. They appointed Mr. DeJoy, who’s a big contributor to the Trump campaign. His wife is a political appointee.

I’ve never seen someone take over a company and in such a short period of time do the things he’s done. Policies that were put in place since he was appointed are already starting to show what his agenda is. He’s reducing retail hours at post offices. For the first time in my 35 years as a postal employee, our retail store is closed for lunch, one hour every day, which is very negative to our revenue.

He’s delaying the mail. He’s making trucks leave on the minute, no matter if there’s mail on it or not. He’s slowing down the service carriers out on the street. Our carriers would stay on the streets until they delivered every letter in their bag. That’s not the case anymore. And at our big processing center, in the last five weeks we have removed five delivery bar code sorter machines. We want to handle all the mail-in ballots, yet we’re doing away with machines that would handle it in a more speedy and efficient manner.

And the last thing he’s done is eliminating overtime. The goal of every postal worker is that every piece of mail goes out every day on time. There’s overtime involved in getting that accomplished. That overtime is now not available. You do what you do in your eight hours and if there’s mail left, it goes the next day or the next day.

But the thing is back in 2006, President Bush put in place that the post office must pre-fund the retirement plan. That’s the first thing why the post office is seeing negativity in their finances.

If none of these changes under DeJoy had taken place, would you feel confident going into the November election with the post office’s ability to handle what we’re expecting to see as a huge increase in mail-in ballots?
The post office always does what they need to do, but with these changes, and the slowing down of the mail and delaying the mail and closing retail, it might cause a serious effect on the post office processing the ballots in a timely fashion.

Since the pandemic started, you mentioned you were seeing a decline in the amount of mail. Has that number returned to normal?
Yes, we have seen a pickup in the mail, but while we’ve seen a decline in a letter mail, we’ve seen a gigantic lift in the parcels and the boxes, the packages, which offset the loss somewhat of the first class letter. I mean, we went from, in Philadelphia alone, processing 20,000 to 30,000 parcels a day. We are now every day over 110,000.

Are you understaffed? Have you had to furlough or lay off employees?
We have in our contract a no-layoff clause, but we’re one of the oldest workforces in the country. And we have people retiring at a higher rate than normal. So right now what they’re doing is when that person retires and vacates a job, that job no longer exists. And that’s been the practice since DeJoy’s been in place and it actually is increasing. And when you revert a job, that kills the need for the manpower, it causes losses and need for jobs, which kills our workforce.

You mentioned that if all the mail is not distributed in the day, then you just take it back and try again the next day. Is that creating a kind of snowball effect?
Sure. I mean, when we’re delivering the mail, there’s mail coming into our stream 24/7. So you bring them back now on top of mail that has to go out the next day that’s just been processed through the postal service. Now you’re putting stacks of mail on top of that mail. And now all of a sudden you’ve got a backlog that you can’t handle. So there’s a never-ending end.

I get calls from my reps from the processing center that there is mail all over the place. That’s never been the case, and now all of a sudden it is. Not even through the early parts of the pandemic. Only in the last seven, eight weeks it’s really become a serious problem.

For those of us who don’t know exactly how the mail processing system is supposed to work, can you walk me through it step by step?
Say you put a letter in the mailbox. The mail box gets emptied by a carrier. The carrier brings the mail back to the station that he comes out of. The truck comes and picks the mail up at the station every day at the close of business. That truck brings the mail to the Lindbergh-Island processing center, where it’s dumped, canceled and run through machines that send it to the right zone or zip, and then trays get sent downstairs by by equipment. They get delivered down the elevator to the trucks, the trucks get loaded, and they drive to their post offices and drop off the mail. The clerks come in in the morning and they slot the mail to wherever it’s going, individual addresses or zips or zones or P.O. boxes. And it’s ready for the customer the next day.

But now since the backup of mail, the parcels are overflowing, the letters, you know, are being delayed. They’re not coming to the station. They have to be here by precise times because the carriers have to hit the streets at a certain time. So if that mail doesn’t get to that station by the designated time, we’re in trouble. Now you’re seeing a delay in mail.

I’ve never seen it more prevalent now than these last eight weeks. Our customers are upset at the window. Our clerks are being threatened by the customers. And I don’t blame them. Customers stand in line for 15, 20, 30 minutes, get to the window and their package ain’t there. And the carriers, when they’re out in the streets and the customer is complaining, Where’s my medicine? Where’s my social security check? Where is this? Where’s that? I mean, the elderly — I mean, everybody does — but the elderly depend on their mail every day. Their medicines have to be there on time. They can’t sit in a station for three, four or five days, which is happening now.

But they have to call their Congressmen and Senators, they’ve got to tell them, Listen, my mail is not getting to the doors on time and what’s going on? The American public have a right to have the mail delivered the way it has been.

Outside of calling their Congressmen and Senators, what are things that Philadelphians can do locally to aid the mail system?
You have to mail your bills a little earlier. If a bill is due on the 15th, instead of mailing out on the fifth or sixth, you might have to mail it out the last day of the month prior, another week or two earlier to have the chance of that letter or that bill being delivered on time. But other than that, you know, Congress controls the processors. Somebody has to put a match under someone’s you-know-what to get this thing righted, because right now it’s going in the wrong direction.

Is there anything else you’d like people to know?
Just that the post office needs to be included in this next stimulus package — the $25 billion for the post office is almost a necessity. Because if we don’t get this, the post office is in dire financial straits. And by September, October, we’re looking at serious financial troubles. I want the public to realize that the postal workers are ready and willing to do what they’ve been doing for the past hundred years, 200 years. But our hands are tied at this point. We have a postmaster general in place right now that doesn’t have the postal worker, the post office, or the American public in his best interest.