During a visit to Old City's brand-new studio, Mind Over Matter, we were challenged by their signature class. 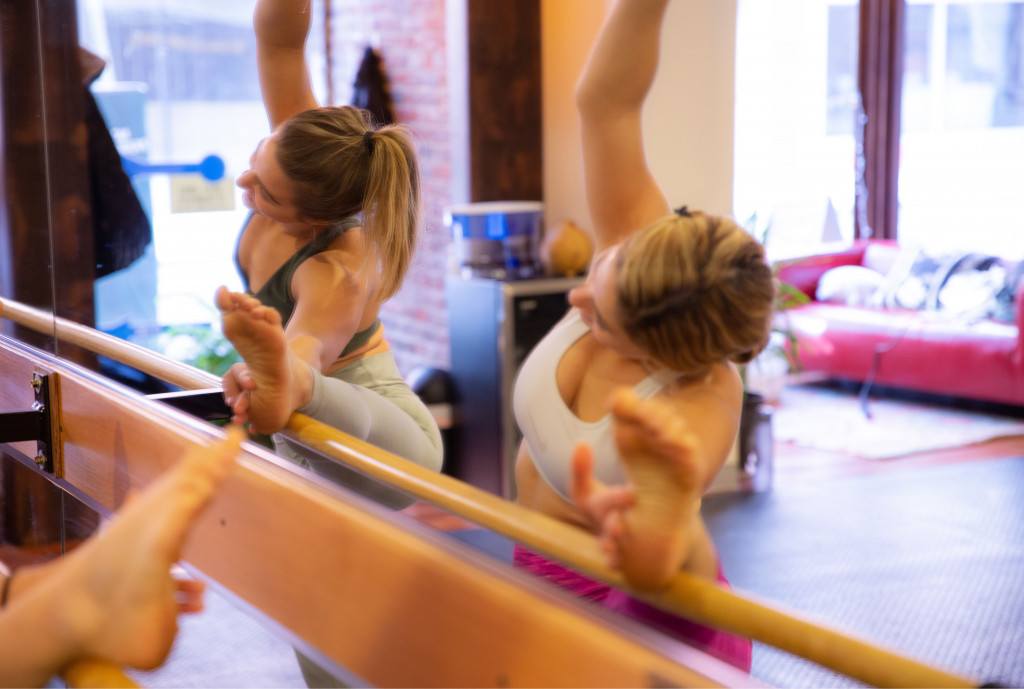 It’s not quite a barre class, and it’s definitely not purely a yoga class. No, Mind Over Matter, the signature class at Old City’s new barre and yoga studio is a little bit of both — and a whole lot of muscle-shaking, sweat-inducing work.

The new boutique gym, which is currently operating in an underutilized Level 1 Fitness studio space on 2nd Street, is run by two Torc Yoga alums, Jen Holford and Natalye Cohen. While the pair have experience teaching sculpt yoga, barre, and other yoga classes, when they opened Mind Over Matter (yes, with a class under the same name), they wanted to create a unique experience. Thus, their signature class, which combines the pulsing, strengthening movements of barre with the stability-testing holds of yoga, was born.

The studio space itself is warm and bright; while black gym matting covers the floor, the studio has invested in bright pink dumbbells, purple exercise balls, and a cozy lounge area near the door. Mats are BYO, or you can rent one there for $2 (the studio also rents towels for $1; we’d recommend just bringing your own).

But back to the class itself. The start of the class felt like a barre class warm up involving larger, heart-rate-rising moves, like squats, which got the blood pumping. From there, we moved into a plank series, which is where the real work began. You know those tiny pulses used in barre, the ones that make your muscles burn so bad, all you can think about is quitting? Expect to do a lot of those in this class. As the instructor coached us to hold a plank while bringing one knee to our tricep, then our nose, and back again, over and over, I found myself silently repeating, Mind over matter. Mind over matter. Mind over matter.

The class hit all the major muscle groups — we moved from core to legs and butt to arms and back to core again. But unlike most barre classes, where you’ll typically stick with small-range movements from start to finish, the Mind Over Matter class incorporated a few yoga flows throughout. After doing an arm series, we’d forward fold, drop our weights, and go right into a chaturanga, upward dog, downward dog sequence. These short yoga flows served as quick, active recovery — while giving us a chance to loosen our knotted muscles before diving into the next segment of class.

There were also elements of a yoga sculpt class in the mix: While holding horse pose, we moved dumbbells overhead to work on our lats, and while balancing on one leg in half moon pose, we did dumbbell rows. While using dumbbells to tone muscles during a barre class is common, in this session, we had the added challenge of finding stability.

By the end of the 45-minute class, I was sweaty, shaky, and feeling the kind of high only a workout or really good coffee can give you before 8 a.m. If you’re up for the challenge, I recommend giving Mind Over Matter a shot — especially because your first class is only $5, and drop-ins are currently just $10 after that.

Ready to give it a try? You can book your class here.

Mind Over Matter is located at 110 N. 2nd Street in Old City.