Be Well Family: The Ultimate Guide to Spraygrounds in Philly

15 awesome places where the kids can cool off this summer. 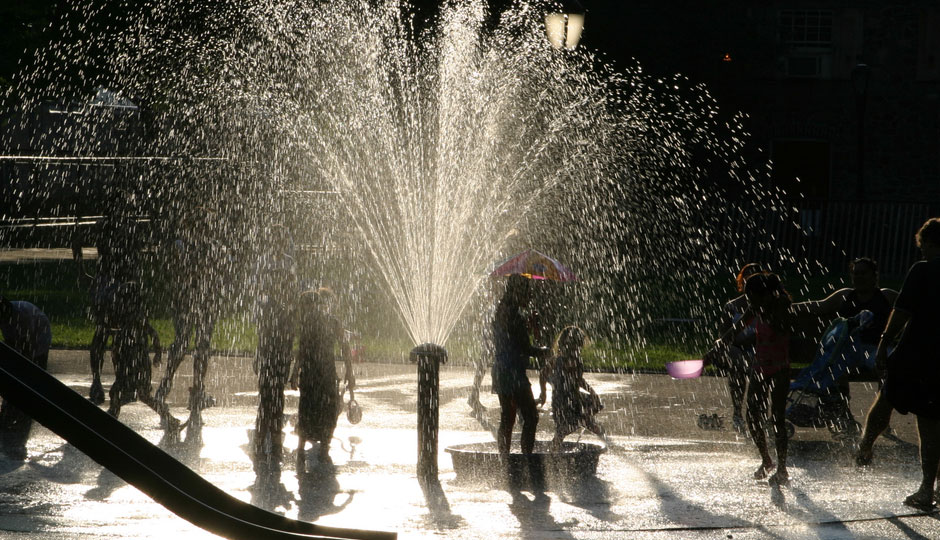 It’s that time of year, y’all: Long, hot summer days, and kids who are dying to be outside for every single moment of them. It’s why Wee Wander’s annual list of spraygrounds is so popular and why we’ve updated it for 2017.

But first: The official, city-listed hours for most city-run spraygrounds are generally 11 a.m. to 7 p.m. on weekdays and noon to 5 p.m. on weekends, “with varying schedules” — with definite emphasis on the “varying schedules” part. Hours of operation have been known to be sporadic and do vary. So here, where we could, we’ve provided the latest known hours, though some sprinklers are run simply by community volunteers and don’t necessarily have set schedules. (In short? A quick call to the park or park rec center before you go might keep things from getting tantrum-y.) Also, it’s very helpful to follow your local park or parks on Facebook: Information tends to be updated pretty regularly there.

If you’re near: Art Museum
Check out: Sister Cities, 18th Street and Benjamin Franklin Parkway.
The water: There’s a reason people are obsessed with this place: In addition to the active, cooling water jets that are embedded in the bluestone plaza, there’s also magical, shaded little wading/boat pond, and water trail where kids can splash and play, as well as float boats and other toys that you borrow from the park or bring from home. Also: The Logan Square Cafe on-site sells ice cream, snacks, pizza, salads, sandwiches and more … plus, there’s a Rita’s stand some days on the plaza.
The hours: The pond is open from 10 a.m. to 5:30 p.m.; the jets generally tend to run at the same hours. All is weather-permitting.

If you’re near: Fairmount
Check out Clemente Park and Playground, at 18th and Wallace streets.
The water: There’s an awesome sprinkler system and ground jets, plus benches encircling the area, so it’s easy to watch the kids play. There’s also nearby Francisville Playground (Cameron Street, near 18th Street), which also has a really great playground and a giant flower sprinkler. (Um, and a pool.)
The hours: Clemente reports that its regular hours for water play are 11 a.m. to 7 p.m. Mondays through Fridays; they will have weekend hours, but aren’t 100 percent sure what they will be yet. (Last year they were noon to 5 p.m.) Your best bet is to call on a weekend before you go. The Francisville sprinkler usually runs from about 12 p.m. to 7 p.m., with varying hours on Saturdays.

If you’re near: Queen Village
Check out: Shot Tower, at Carpenter and Front streets or Weccacoe Playground at Catherine and Fourth streets.
The water: Shot Tower’s beautifully kept little sprayground has lots of ground fountains and a brightly colored rubberized ground. The playground equipment at Weccacoe recently got a facelift and the spray area got a new pole and benches that are in the shade.
The hours: The hours at Shot Tower are 10 a.m. to 12 p.m and 3 p.m. to 7 p.m., seven days a week. (Note: the Friends of Shot Tower run the sprayground on weekends, and water is contingent on someone present to turn it on. Check their Facebook page for any changes in schedule.) Weccacoe seems to follow the city’s hours.

If you’re near: South Philly
Check out: Smith Playground at 24th and Snyder streets (Note: Not Smith Memorial Playground — that’s a different place!)
The water: Your classic splash pad — big, open, lots of water sprayers. Lots of grassy land outside the pad area for running around on, too.
The hours: The sprayground runs from from 11 a.m. to 7 p.m during the week; 10 a.m. to 5 p.m. on Saturdays and noon to 5 p.m. on Sundays.

If you’re near: Wash West/Bella Vista
Check out: Seger Park at 10th and Lombard streets.
The water: It’s a simple sprinkler system, but it definitely does the trick. Same with the Starr Garden playground sprinkler at nearby 6th and Lombard.
The hours: Seger’s sprinkler is usually on when the park is open. That’s 9 a.m. to 8 p.m. every day of the week, however know that weekend hours are kept by volunteers. At Starr Garden, the spray is turned on when it’s close to 90 degrees, though if it’s not, the park officials say that you are welcome to go into the rec center and ask to have it turned on.

If you’re near: Pennsport
Check out: Herron Park, at 2nd and Reed streets.
The water: We’re talking sprinklers and jets, y’all, and plenty of space to run around in them. It’s an awesome park, and very helpful that that everything is fenced in on a flat space, so the kids can really roam far away and they’re safely within your eye-line. There’s also playground equipment. The park is also near Federal Donuts, which is nice for a treat.
The hours: It’s hard to get anyone at Herron to pick up phones but last year the water was on between 2 p.m. and 7 p.m. during the week, and noon to 5 p.m. on weekends. (Although we’ve been there on Sundays when the water is on at 10 a.m.) But sorry, guys — this one remains a bit elusive to us as far as official confirmation goes.

If you’re near: Center City
Check out: Dilworth Park, at the west side of Market and City Hall.
The water: A big chunk of the plaza space right in front of City Hall is covered in jets that spring up from the ground. The setting right in front of City Hall makes it extra cool, and there’s also a cafe right there, with sandwiches, snacks, and a bar (for you) after 5 p.m. on weekdays and all day on weekends.
The hours: The Center City District says that most days they turn on the fountains around 10 a.m., and run them until 8 p.m.

If you’re near: West Philly
Check out: 48th & Woodland Splash Park, at 48th and Woodland streets.
The water: A good-sized sprayground with a whole bunch of colorful sprayers in the shape of rainbows and cacti. Lots of water and fun at this one.
The hours: The folks at the rec center say hours are generally 1 p.m. to about 8:30 p.m. on weekdays. The official weekend hours are listed as noon to 5 p.m., with hours varying. We recommend a call first on weekends.

If you’re near: Fishtown
Check out: Shissler Rec Center at Blair and East Berks streets.
The water: This is one of the handful of spraygrounds that’s opened just in the past few years, so it’s still fairly new and shiny. It’s basically your classic model — a bunch of jets that spurt up from big slate stones.
The hours: The water runs everyday from 9 a.m. to 8 p.m.; but officials say to ask staff members or call 215-685-9888 with any issues.

If you’re near: Mt. Airy
Check out: Mt. Airy Playground at Germantown and Sedgwick streets.
The water: A classic sprayground with jumping water jets and plenty of room to frolic. Note: Not a ton of shade at this one, so go prepared for lots of rays.
The hours: Weekdays until the end of June, the water is generally running between 1 p.m. and 7 p.m. (with a break between 5 and 5:30 p.m.) At the start of July, the water will be on starting at 11 a.m. most days, and stay on until 7 — sometimes later, if the crowds are big and the weather is hot. Weekends are more iffy, because — as is the case with ALL rec centers — a staffer has to be there to turn on the water. So weekends merit a call.

If you’re near: Roxborough
Check out: Houston Playground at Grakyn Lane.
The water: A classic, colorful sprayground with above-ground sprayers and in-the-ground jets … the whole shebang.
The hours: Mondays through Fridays from noon to 9 p.m. and 10 a.m. to 2 p.m. on Saturdays.

If you’re near: Northeast Philly
Check out: Ferko Playground at Cayuga and J streets
The water: Another big, colorful sprayground with both sprinklers and jets inside a big park.
The hours: The weekday schedule is from noon to 6 p.m., with weekends running 10 a.m. to 5 p.m.

We could go on here, really — there are more great options a little further beyond Center City (like Sturgis in East Oak Lane; Panati in North Philly; the Waterview Rec Center in East Germantown; and more!). You can check out the massive list of city pools and spraygrounds (complete with phone numbers), or peruse this 2014 MetroKids roster, which also includes Jersey and Delaware.

Also! You might also note that some city playgrounds have misters that shoot fine sprays of water from a pole. You can keep your eyes peeled for those — but then again, Google Maps has a pretty thorough, fantastic list of everything watery: the single poles, spraygrounds, cement animals that spurt water, and so on.