Plus: The latest crime stats are out. And they’re not good. 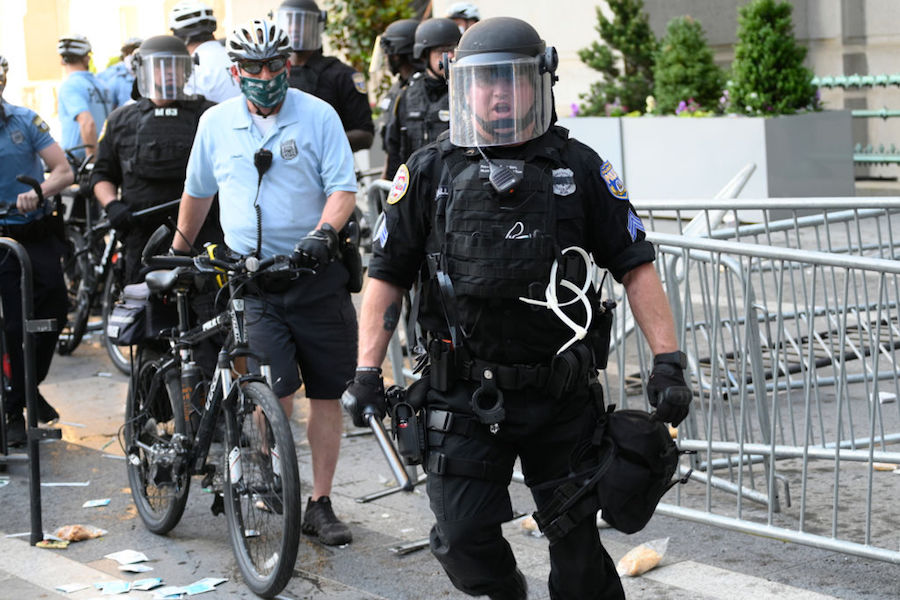 Protestors clash with Philly police near City Hall, in Philadelphia, PA on May 30, 2020. Cities around the nation see thousands take to the streets to protest police brutality after the murder of George Floyd. Now, Philadelphia City Council demands police reforms. (Photo by Bastiaan Slabbers/NurPhoto via Getty Images)

You’ll probably remember the “painful” budget proposal that Philadelphia Mayor Jim Kenney sent to City Council way back at the beginning of May. Seems like ages ago, doesn’t it?

Part of that budget proposal includes a $14 million increase for the Philadelphia Police Department, which already accounts for the largest chunk of the city’s budget — by far. City Council and Kenney were always going to go to battle over his budget proposal, because it drastically slashes funds to many departments and offices, and completely eliminates some. But in the wake of the George Floyd protests and the nationwide call for police reform, that battle has taken on a new light.

On Monday, 14 of Philadelphia’s 17 City Council members fired off a letter to Kenney about the Philadelphia Police Department and his proposed budget increase for it.

“Our police department consumes a sixth of our operating budget, three quarters of a billion dollars,” they wrote. (Emphasis theirs.) “Since 2016, the police budget has increased by about $120 million. Given that context, and the deep cuts proposed for virtually every other department, we cannot accept the proposed $14 million increase to the police budget for Fiscal Year 2021.”

The letter goes on to make a list of demands (they call them “recommendations,” but that’s just because they’re being all civil and whatnot) regarding police reform in Philadelphia. They are as follows:

Sounds pretty reasonable to me.

And if you’re wondering who hasn’t signed on… David Oh, Brian O’Neill, and Bobby Henon, a.k.a. the Johnny Doc lackey currently under federal indictment.

But that report is based on data that ends sometime on Sunday, and when you factor in the homicides since then, you’re actually looking at an increase of 25 percent year-to-date. Definitely moving in the wrong direction. Shooting incidents — homicides included — are up nearly 70 percent.

There’s a Change.org petition circulating demanding the way that policing is handled on the campus of the University of Pennsylvania. And it’s up to 10,834 signatures.

“The murders of George Floyd, Ahmaud Arbery, Breonna Taylor, Tony McDade, and countless others continue to bring into focus the racist fascist police state that exists in the U.S.,” reads the petition, which is address to Penn president Amy Gutmann, the deans, and the board. “As members of the Penn community, we stand in solidarity with our comrades protesting this state on the streets of Minneapolis, Brunswick, Atlanta, New York City, Philadelphia, and the rest of the country. Moreover, we stand against the manner in which this police state is institutionalized at the University of Pennsylvania, which includes racially-biased surveillance, reporting, arrest practices, the advocacy of militarized models of campus policing, and the implementation of policing measures that cut Penn off from the communities surrounding it.”

The petition then goes on to call for ten immediate changes, ranging from completely divesting from “corporations like Philadelphia-based Aramark that profit from the prison industrial complex” to banning “the use of guns on campus by the university police force.” You can read all of the demands here.

“The violent police state is alive and well in Philadelphia, and we believe that the University is fully complicit in the structural conditions that have led to the lynchings of Black men, women, and transgender people in our communities,” concludes the petition. “It is time for Penn to demonstrate that it is serious about divesting from this regime of violence.”