Tom Scannapieco did, virtually, at a noontime ceremony today. Even though the building's not yet finished, there are already a lot of "tops" and "firsts" attached to it. 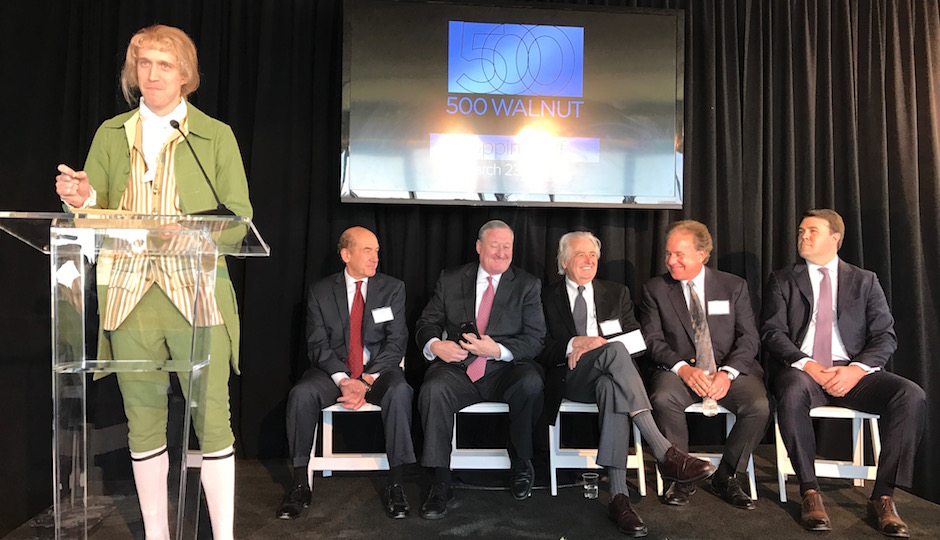 Is Tom Scannapieco a revolutionary?

And there’s no denying that the Cecil Baker + Partners-designed tower makes a bold statement on its site across Walnut Street from Independence Hall.

We’ll get to the ways it does that, and the clever magic trick Baker pulled off, in a bit. But first, some facts and figures:

Baker praised Scannapieco for his commitment to getting the project right. “This was a monstrously complicated project, with all the angles and corners and tweaks,” he said. “At no time did Tom come to me and say, ‘Tone it down.'”

“There’s no building in Philadelphia I like more than this architecturally,” Scannapieco said. Its appearance may be a rare example of good design by committee: the building’s unusual footprint, with its southeast corner sliced off, is the result of negotiations involving the developer, the architect, and the National Park Service, which worried that the tower would mar the view of Independence Hall from the Liberty Bell. (The bell’s current placement is designed to give visitors a view of the hall without the 20th-century towers that stand behind it.)

Which brings us to the magic trick: One has a clear view of both Independence Hall and the Liberty Bell Pavilion from every unit facing north, but someone standing in the Liberty Bell Pavilion looking at the bell would not see the 500 Walnut tower. The corner-cutting (about the only corner-cutting in the project) that produced this result also created a distinctive, slender tower that itself resembles a knife slicing the sky.

That’s not the only magic trick Baker and Intech performed in putting this building together. Building a reinforced concrete building with sizable floorplates (from 4,400 square feet on the upper floors to nearly 6,000 square feet at the base) and no interior support columns was an engineering feat of the highest order.”This is the most complex concrete superstructure ever erected in this city,” said Will Schwartz, co-founder and president of Intech. “There was so much rebar in some places that it was hard to pour the cement,” a manager for concrete supplier Healy Long & Jevin said after the ceremony.

In order to provide buyers with maximum flexibility in configuring their units, all of the utility pipes and conduits are likewise contained in a service core near the elevators by the building’s west wall.

Each floor can be configured as the buyer sees fit, further advancing a trend in multi-unit residential tower construction. The lower floors have up to two units, while the upper floors have one unit each. The building has 35 units in all; Scannapieco said at today’s ceremony that two-thirds of the units have been sold nine months before completion. Some buyers have also purchased both units on a two-unit floor in order to combine them into a single, super-spacious apartment.

Mayor Jim Kenney, who also spoke at the ceremony, both touted the tax abatements enacted during Ed Rendell’s tenure as mayor for making buildings like this one possible and pointed out that the buyers of units in this building would produce significant tax revenues. He even managed to cast the project as a weapon in the fight to eradicate poverty in Philadelphia: “The people who are going to live in this building could live anywhere they want and generally have a couple of residences somewhere else. It’s important that we capture this group in the city and allow them to give us the opportunity to help the poverty issue in this city improve.

“We have a lot of poor people in this city. We need a lot of wealthy people to get us where we need to be while we’re fixing the institutions that created the poverty in the first place.”

Kenney also took time to tout one of his other initiatives, one that will involve the labor unions whose members built this building: his “Rebuild” initiative to shape up the city’s parks, recreation centers and other public buildings. The initiative also includes an apprenticeship program for poor and minority youth that will enable them to get construction jobs like these.

Also sharing in the limelight at today’s ceremony as a silent partner was Matthew Downs, senior regional manager for the Northeast for Ullico’s Real Estate Investment Group.

After everyone had said their piece, the more than 200 invited guests and media witnessed another first: the first virtual topping-off of a building in Philadelphia. Schwartz explained that these ceremonies usually take place outdoors and involve the hoisting of the final beam of a building’s skeleton frame in place, with an American flag and an evergreen tree attached. “The flag means national pride in building in such a great nation. The evergreen tree started as a practice in Holland. Buildings in Europe were t

“The flag means national pride in building in such a great nation,” Schwartz said. “The evergreen tree started as a practice in Holland. Buildings in Europe were topped off with evergreen trees to symbolize the good health of the residents who would occupy the building.”

But this building’s steel is contained in the reinforcing bars, so there was no beam to which to attach a flag or tree. Instead, video screens displayed an event that actually took place in early February: the ceremonial hoisting of the last bucket of cement, with an American flag attached to the bucket and an evergreen planted in the cement.

With this, construction action shifts to the building’s interior. The first residents are set to move into their units this summer, with completion and official opening set for the early fall. “We’re a long ways from the finish line, but we guarantee it’s going to be successful,” Schwartz said.

500 Walnut: The (Not Yet) Finished Product 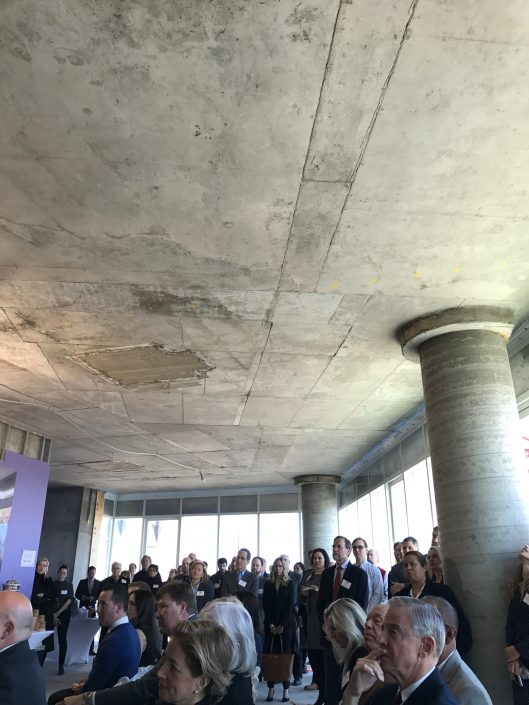 The columns on the right are the only interior support columns in the structure save for matching columns near the west wall. 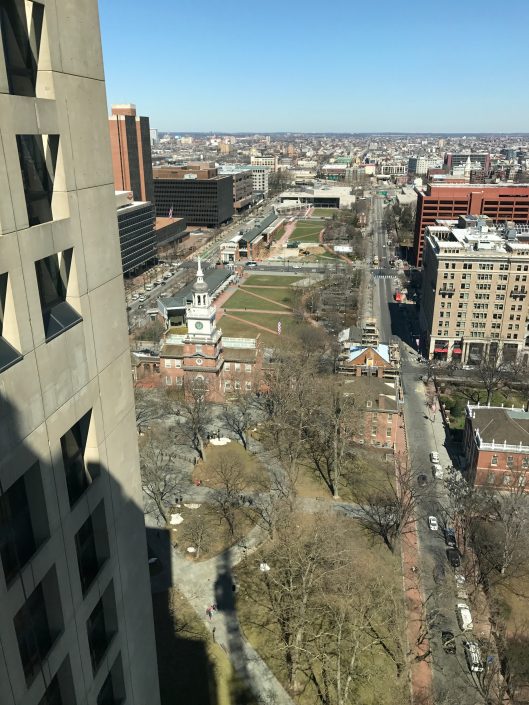 Every unit on the building's north side offers a clear view of Independence Hall and the Liberty Bell pavilion, but Liberty Bell visitors can't see 500 Walnut at all. 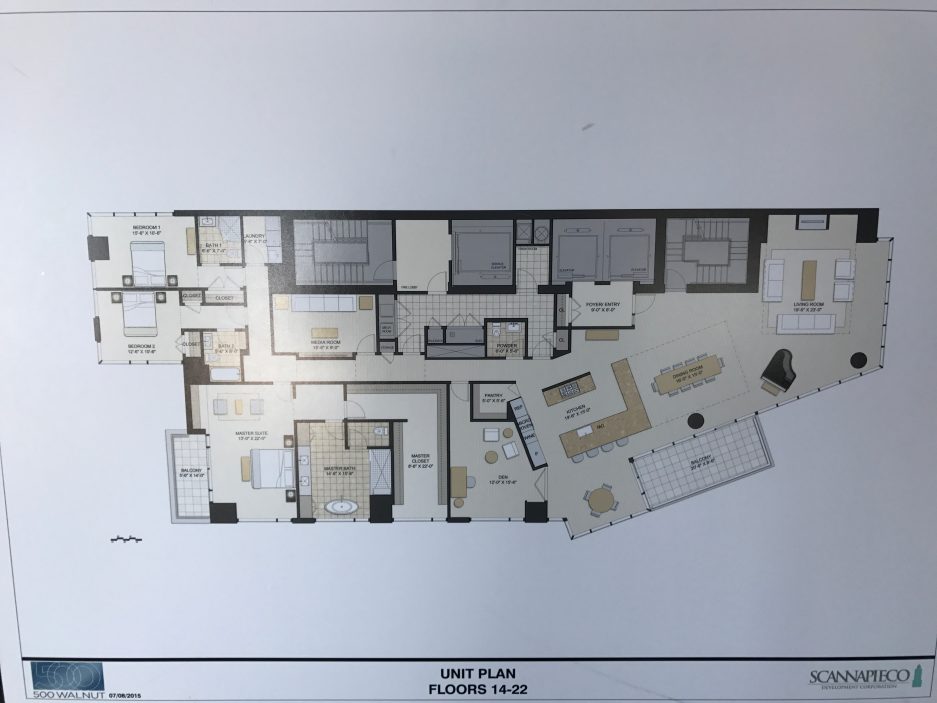 Example of a lower-floor plan. 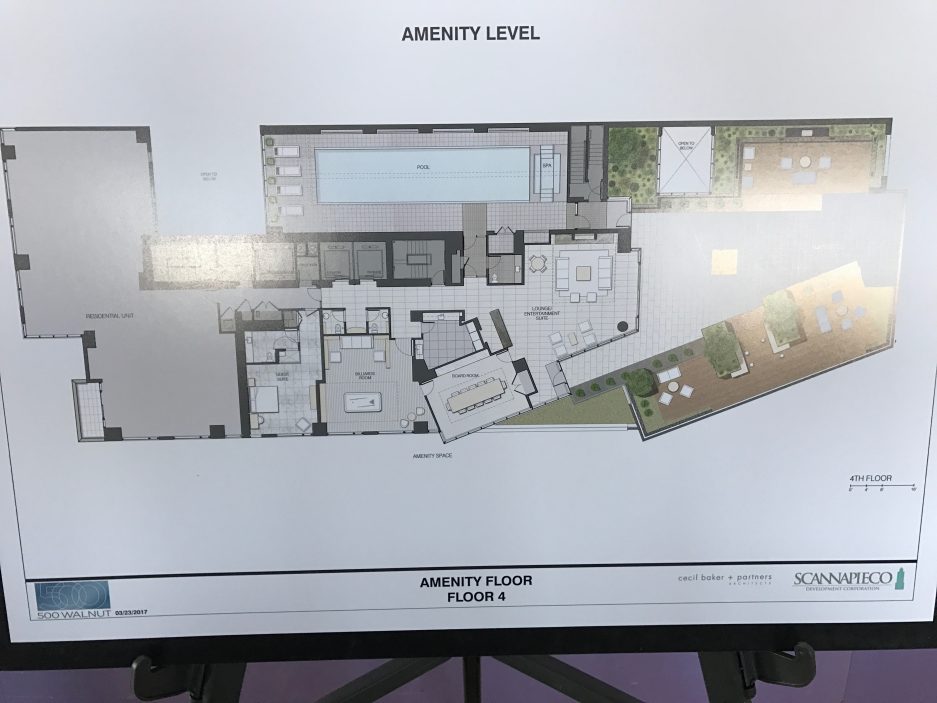 Example of an upper-floor plan. 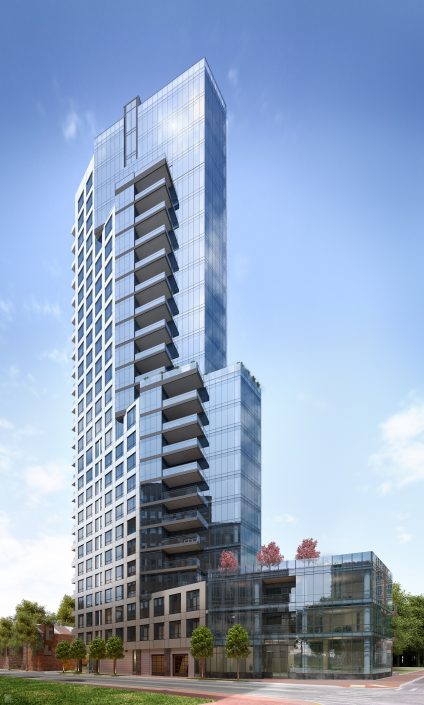 Daytime rendering of the 500 Walnut tower.

View of lobby from entrance.

View of private garden from lobby. 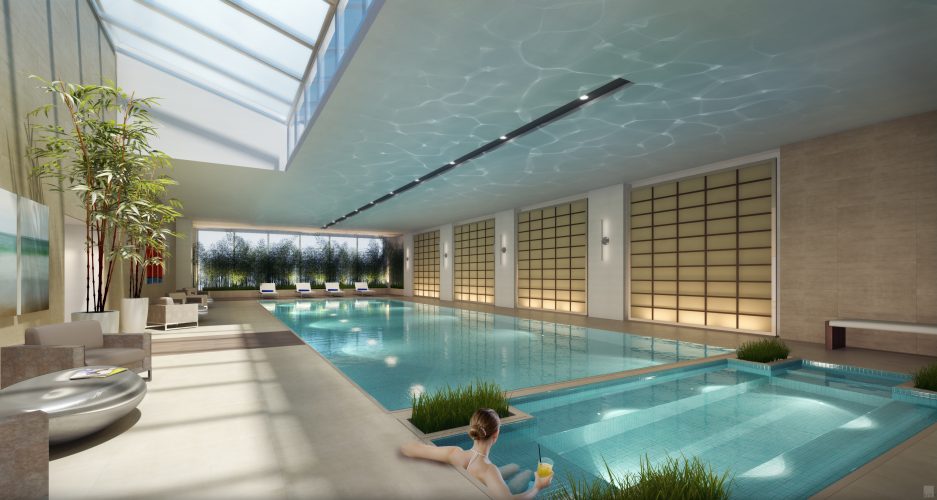 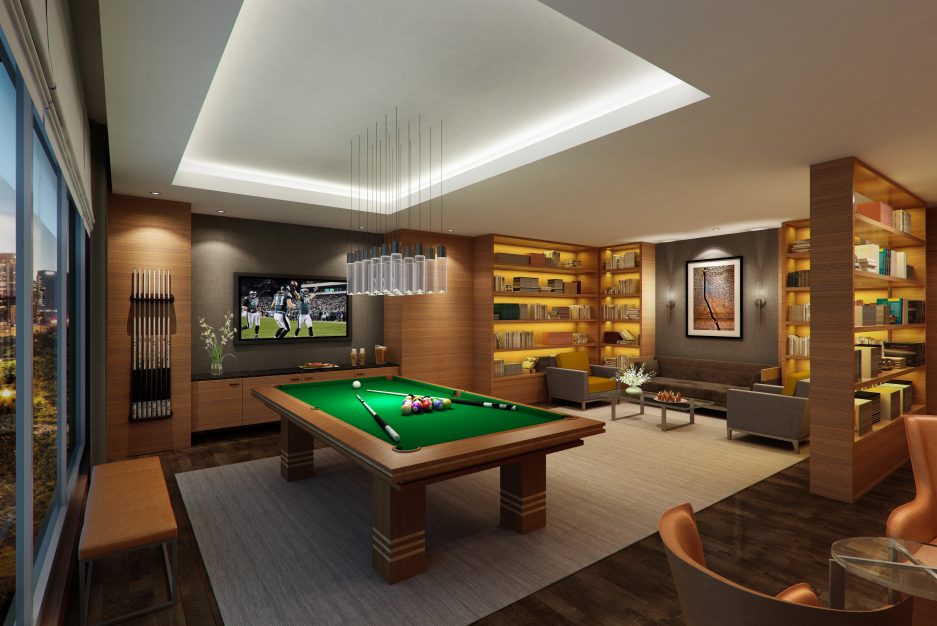 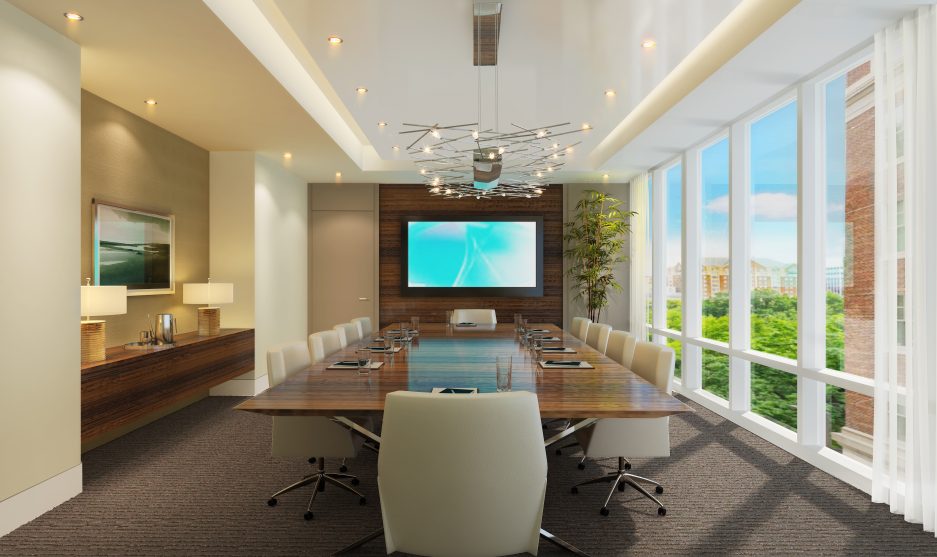 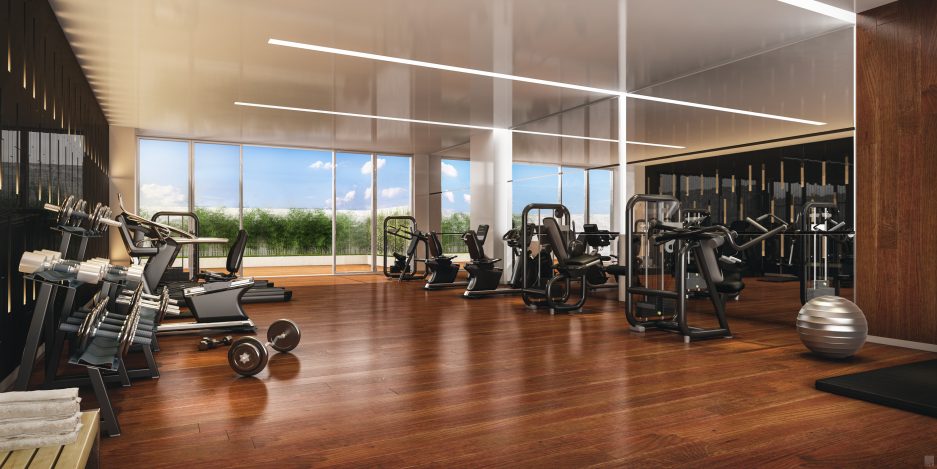 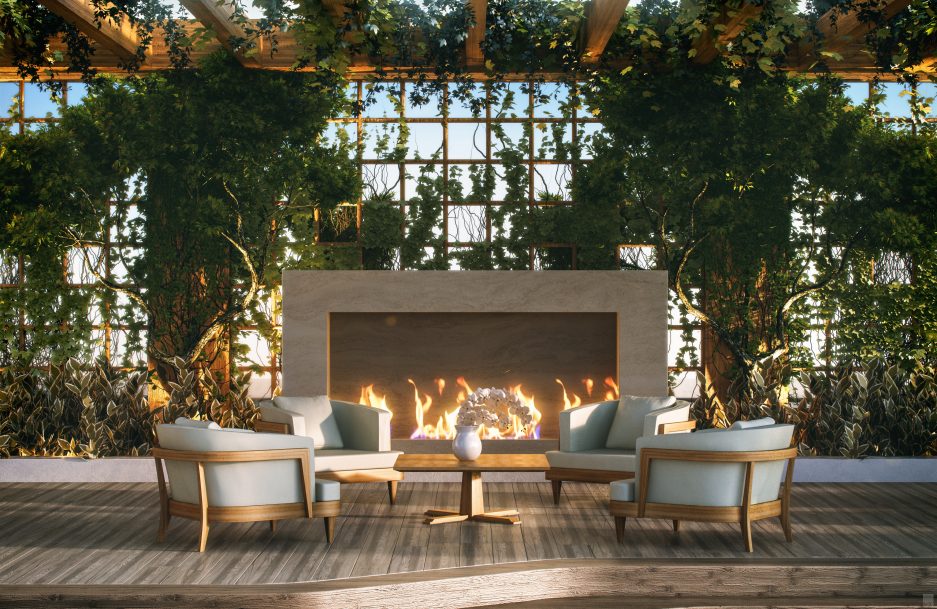 Fireplace seating on the community terrace.

Another view of the community terrace. 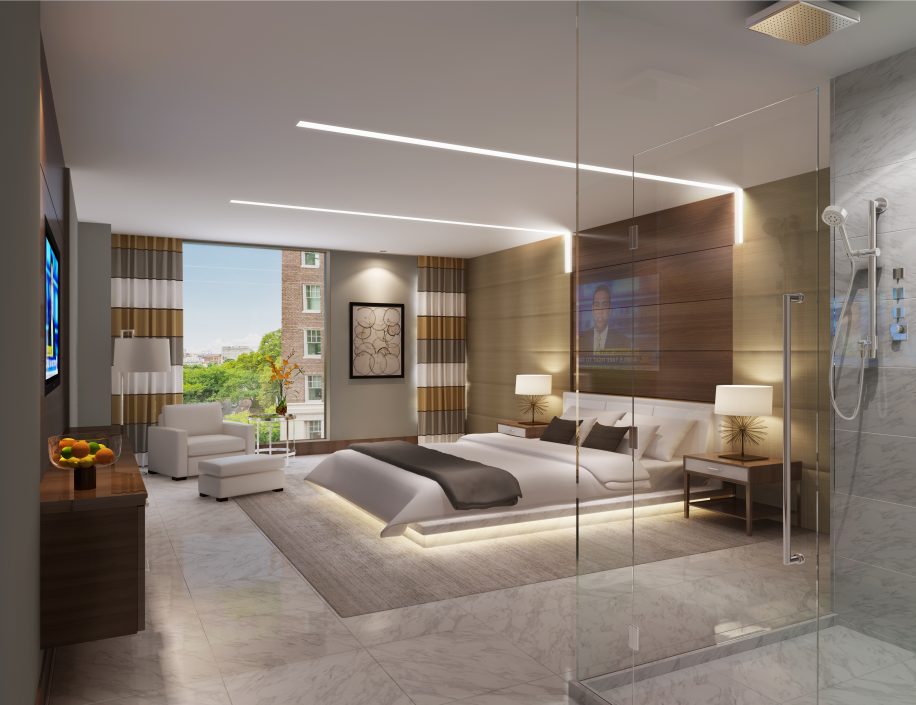 Residents can reserve a guest suite for visitors. 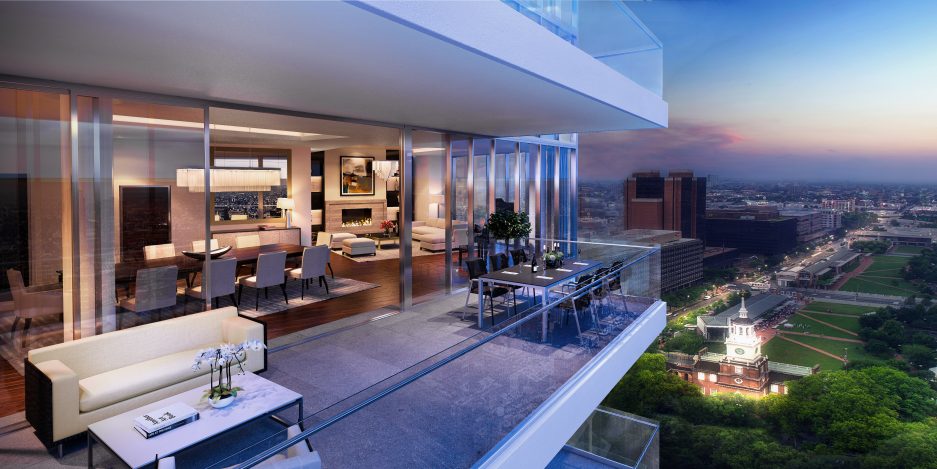 Each unit has a large balcony with views of Independence Park and the historic district. 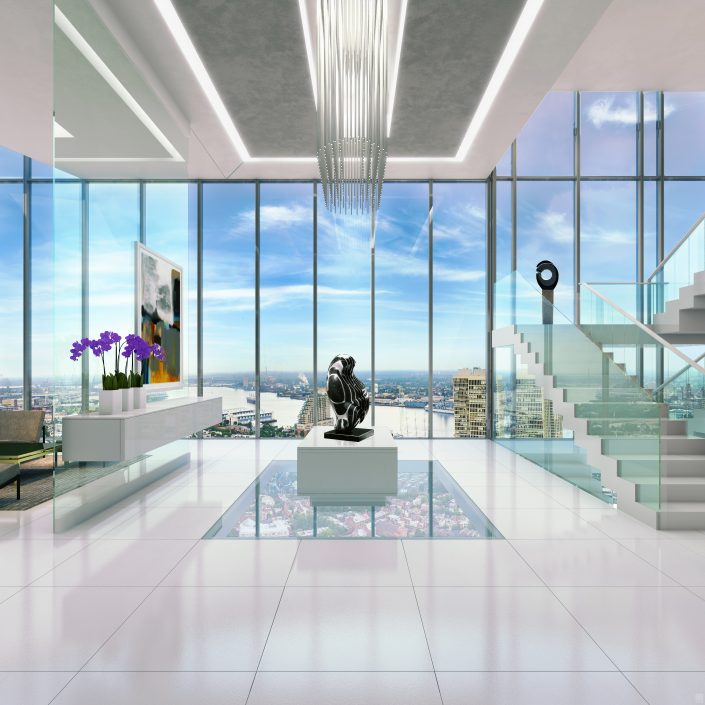 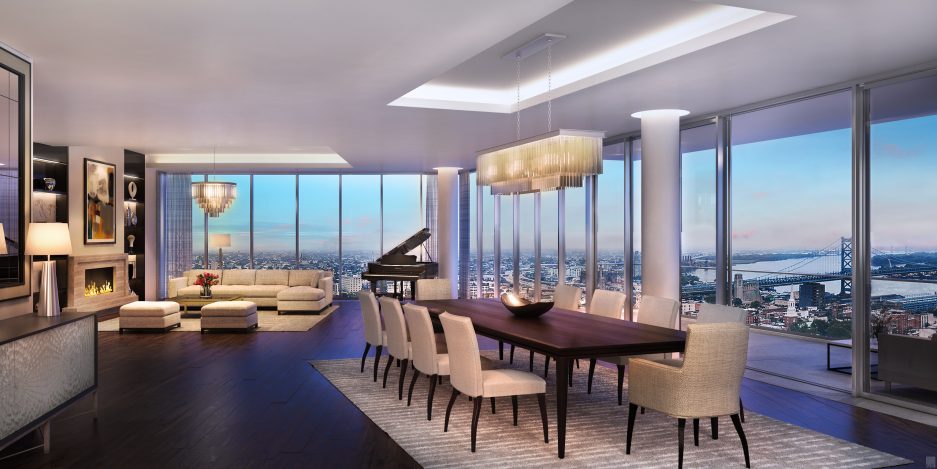 Dining room with a view. 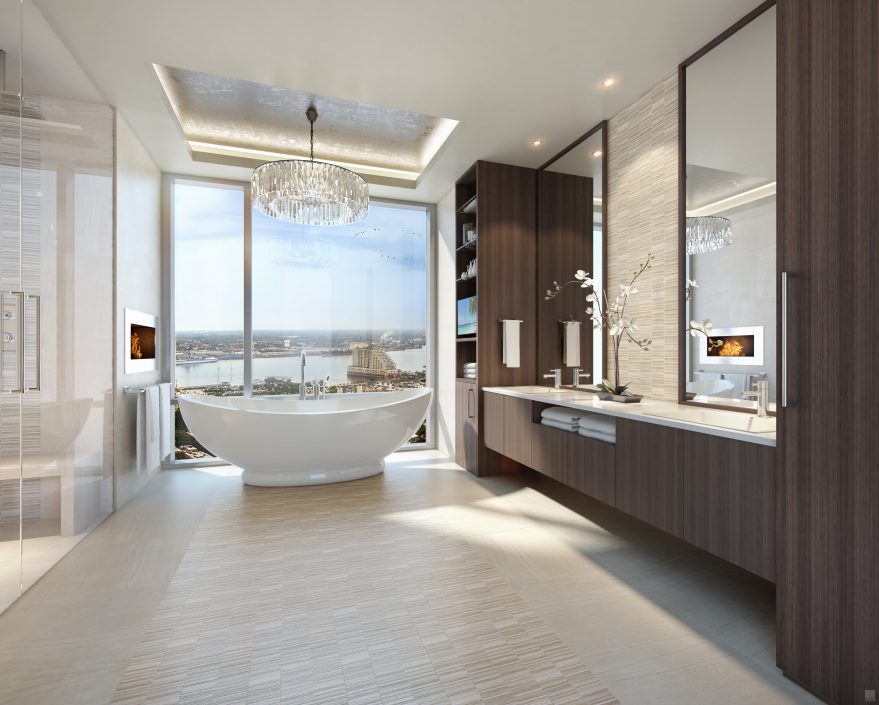 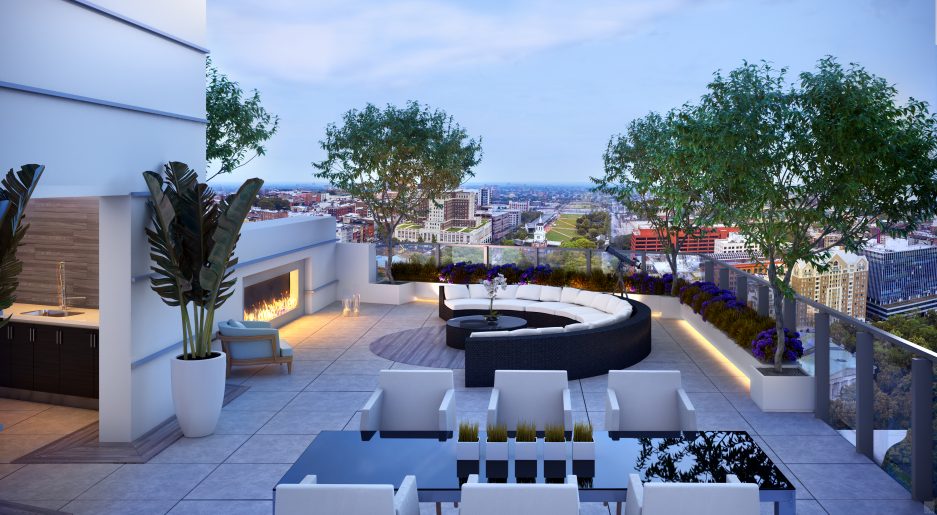