21 Ways to Cool Off In, On and By the Water Around Philadelphia

Spraygrounds! Fountains! Tiki boats! Your guide to having a summer’s worth of fun with a cool drink in your hand and a smile on your face. 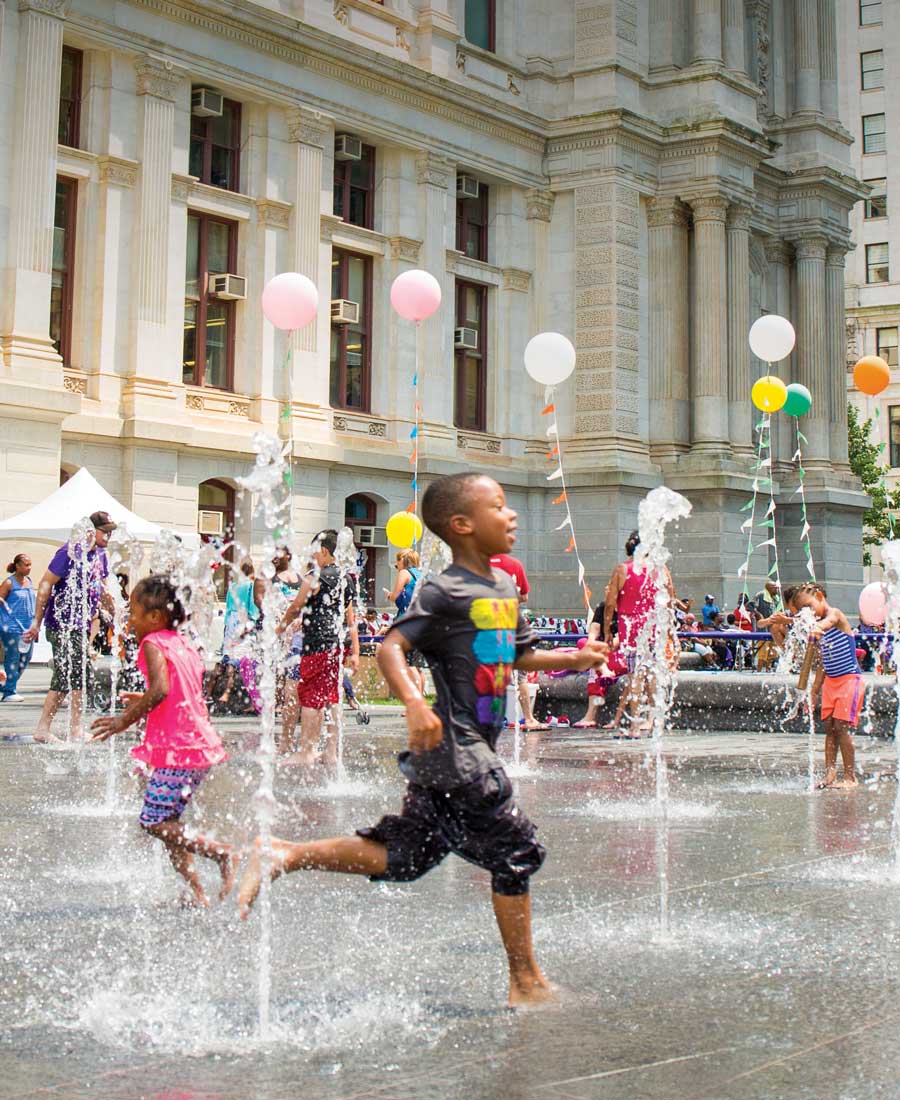 Summer is here, and the best way to beat the heat is to swim, paddle, and cool off by the river of your choice with a frozen drink in hand and a smile on your face. Whether you want to be near the water, in the water or on top of the water, we’ve got you covered. (And if you want to be uncovered, see the nude beach below.)

Get in the Water

Six places to suit up and dive in

1. Philly Pools
Philadelphia’s got 68 public pools scattered all over the city, and not one of them was open in 2020. “It was pretty devastating,” says Parks & Rec commissioner Kathryn Ott Lovell. This year’s a different story, of course, as most (though not all) of the pools are opening soon. Admission, as always, is free (and so are swim lessons, no ID required). Philly’s pools aren’t just a place to cool off, says Ott Lovell; they’re community hubs where neighbors meet neighbors and schoolkids can feel like they’re on vacation. “It really is a critical part of the summer experience for so many families.” Find an interactive map of all the pools on the city’s website.

2. Spraygrounds
Cheaper, safer, and easier to maintain than swimming pools, spraygrounds have become an increasingly familiar sight around town in the past decade. You can often find these high-powered sprinklers in the middle of a colorful rubbery surface built alongside public playgrounds. (The city provides a map of locations that includes sprayground hours on the Parks and Rec website.) This season, the city increased its spraygrounds total to 90-plus thanks to new and refurbished parks in Carmella Playground (Kensington), McCreesh Playground (Southwest Philly) and Roosevelt Playground (Northeast Philly), among others. Ott Lovell is partial to the one in Herron Park in South Philly: “I say that as a mom and as a ­commissioner.”

3. Unforbidden Fountains
There are a few fountains in the city that encourage swimming — or at least getting your feet wet. In addition to Dilworth Park’s granite splash zone, you’ve got the massive misty geyser at LOVE Park and the distinctly kid-friendly water features of Sister Cities­ Park. In addition to the spraygrounds, Sister Cities has a cute little pool that’s popular with splashing toddlers, weary parents, and the occasional passerby struck by the spontaneous urge to dip in a toe. 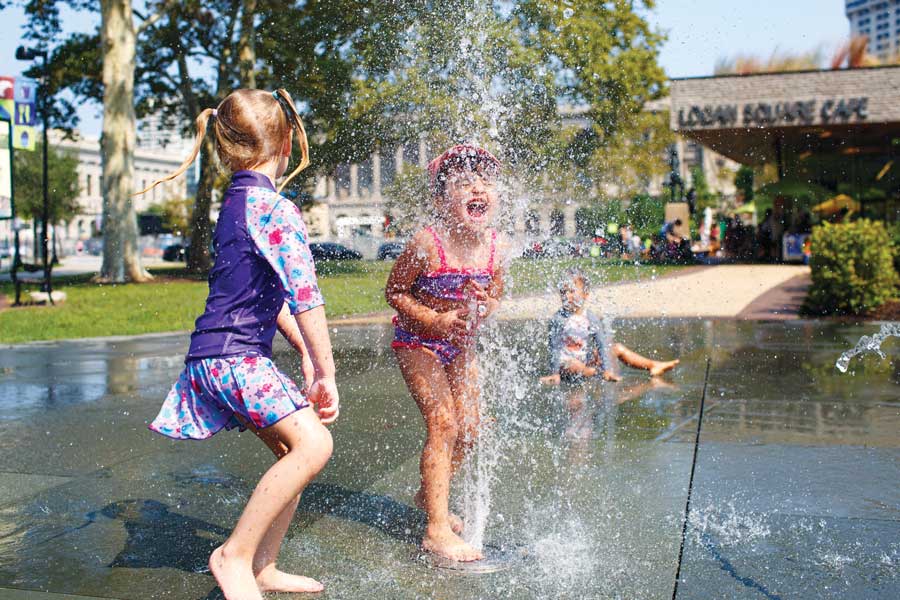 Kids splash around in the fountains at Sister Cities Park. Photograph by Matt Stanley

4. Forbidden Fountains
Listen: You’re not supposed to swim in Swann Fountain. You know the one I mean, right? It’s blue and round and right in the middle of Logan Circle, and it looks exactly like a swimming pool. Yeah, no swimming there. You see those bronze statues of half-naked giants and endlessly expectorating turtles? Those are century-old Alexander Calder works of art. You’re not supposed to swim with art. There’s a sign saying as much. But also: It’s just a sign. But also, and we couldn’t be any clearer about this: One mustn’t swim in that fountain.

5. Water Parks
For reasons no scientist can answer, Mount Laurel in South Jersey has not one but two water parks. The mostly outdoor FunPlex — which used its pandemic vacation to add a new pool, some cabanas, and a non-watery tower ride, among other attractions — is looking to return to active duty on July 2nd for limited-capacity crowds. At press time, the all-indoors CoCo Key Water Resort has yet to announce its summer plans. But when they’re open, they’ve got an aquatic jungle gym, water cannons and slides.

6. Nude Beach
Local nudist subreddits suffer from sagging enthusiasm, but statistically, there must be dozens of people around here who like to hang out in the buff. For them, there’s Gunnison Beach in Sandy Hook, New Jersey, the only official clothing-optional beach in the area. Unofficially, some bathers still pursue that all-over burn at Higbee Beach in Cape May, though it formally forsook its nude-beach status 20 years ago. Scofflaw naturists risk a fine. 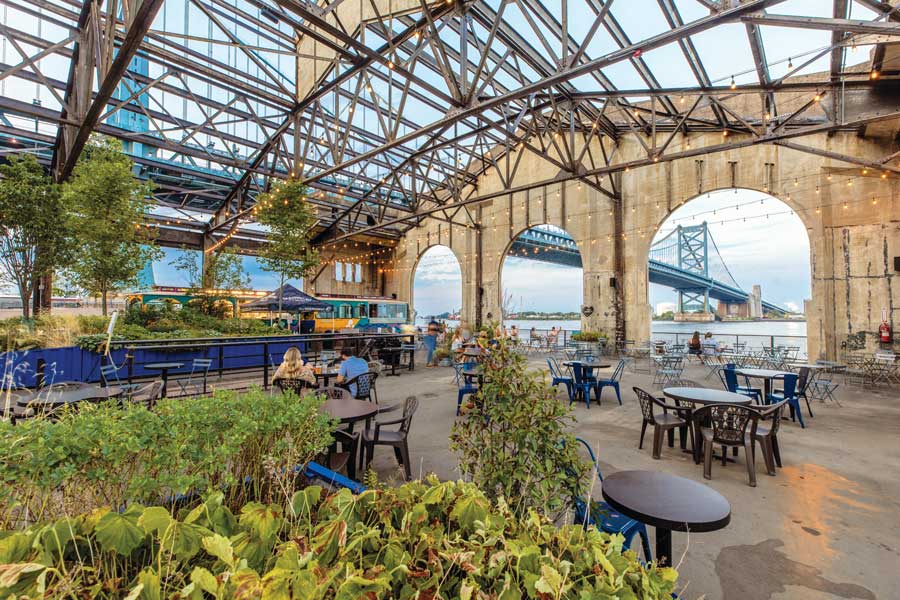 Eat on the Water

Is it just us, or does food taste better when paired with shimmering vistas? —Maddy Sweitzer-Lammé

The Landing Kitchen
Nick Elmi and Fia Berisha have stocked the menu with picture-perfect toasts, hearty salads, and coffee drinks that encourage lingering on the patio by the Schuylkill. 617 Righters Ferry Road, Bala Cynwyd.

The Garden at Cherry Street Pier
The Garden opened in 2020 with everything we needed at the time: plenty of fresh air, greenery, and outdoor drinking and eating space. It’s back for 2021, and it turns out we still need every one of those things. 121 North Columbus Boulevard, Old City.

The Patio at Giant
Because where else can you buy groceries and enjoy a beer and Mission Taqueria on a terrace overlooking the Schuylkill? 60 North 23rd Street, Logan Square.

Moshulu
Is it cheesy to eat on a boat that never moves? Yes. Do we love it anyway? Also yes. Moshulu’s deck is a perfect place to while away a summer afternoon, drink in hand. 401 South Columbus Boulevard, Society Hill.

Stella of New Hope
Jose Garces’s Stella, with its covered deck over- look­ing the Delaware, is a romantic spot to end the day with wine and house-made pasta. 50 South Main Street, ­New Hope. 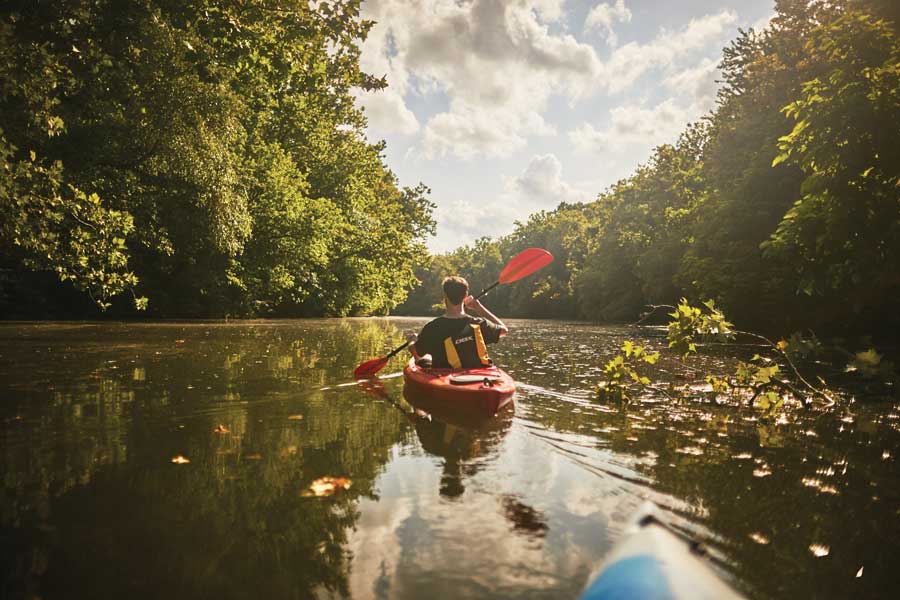 A kayaker explores the Delaware River. Photograph by Dan Lidon

Float on the Water

Nine ways to explore our rivers, some paddling required

Go Kayaking
You can launch your own on both rivers, borrow one from Bartram’s Garden, or take a tour with Hidden River Outfitters. But the coolest option might be the Independence Seaport Museum’s guided tours along the Delaware — ­especially the one to Graffiti Pier. (The museum will also rent you swan- and dragon-shaped boats for self-guided pedaling around Penn’s Landing basin.) Port Richmond’s famously crumbling, tagged-to-oblivion railroad structure is (at least officially) closed to the public pending its rebirth as a tourist attraction in 2024. Paddle up now for a unique vantage point and a chance to document a Philly landmark that’s always in flux.

Try Tubing
The Delaware River’s come a long way in terms of pollution and prettiness, but you probably still don’t want to go tubing in Philly with all those colossal cargo ships lumbering about. Instead, you oughtta head upriver, where the waters are clear, gentle, and uncongested (relatively). Delaware River Tubing in Milford offers the lazy-river go-with-the-flow treatment throughout the warmer months. 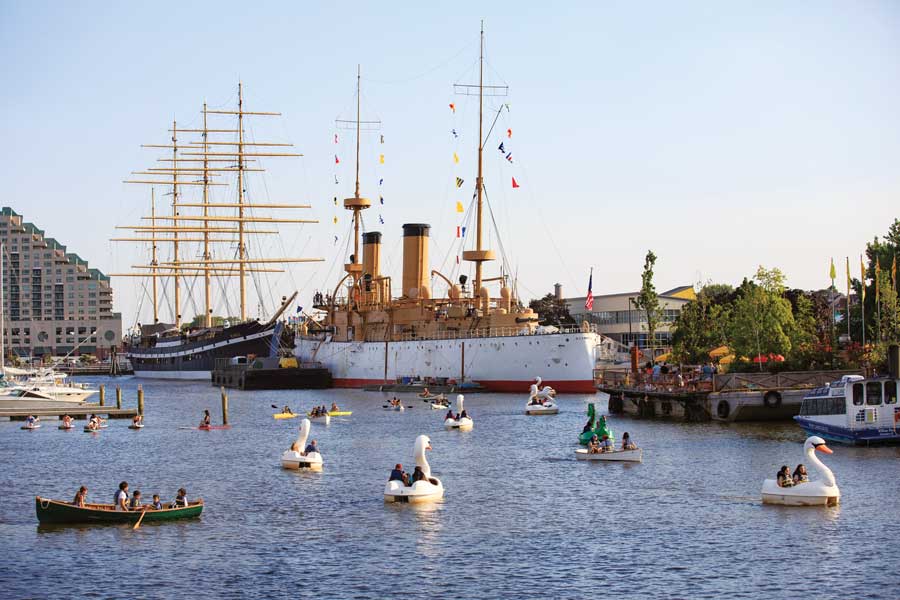 Drink on a Tiki Boat
Decked out with thatched roofs, bamboo siding and barstools, the tiki boats of Cruisin’ Tikis feel right at home in a party town like Sea Isle City. But can you float an idea like that in Ocean City, a bone-dry family vacation spot where the wildest nights usually end in mini-golf and Kohr Bros.? We’ll see. Two different BYOB tiki-boat touring companies are giving it a shot this summer: Pau Hana and Beachy Tiki. Does Ocean City know how to party? Serious question.

Cruise on a Picnic Boat
Say you want to class it up a little bit, maybe shell out some clams for a special date night. Consider a tour with the brand-new Sea Philly. Starting July 1st, they’re offering short cruises on both rivers (but no seas) aboard a 26-foot mahogany-lined picnic boat built in 1961. For $400, a couple can take an hour-and-a-half cruise along the Delaware at sunset, chomping on charcuterie and sipping whatever they brought to sip. 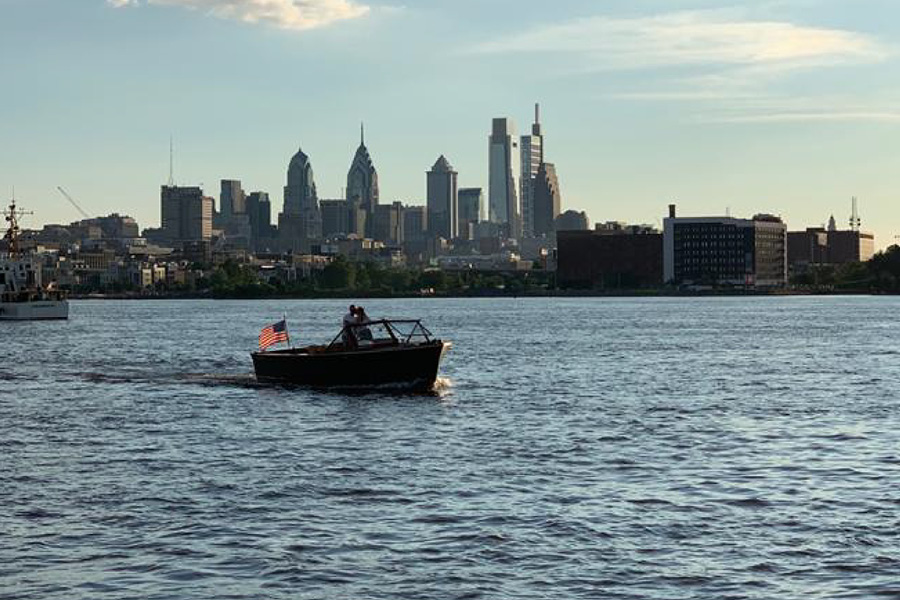 Join a Boat Share
Obviously, you can’t just walk into Freedom Boat Club for the first time and sail away laughing. There’s a three-hour safety course you have to take, and they’re gonna want to see some ID, and there are dues (memberships start at $299 a month), and you should probably buy a hat and a pipe — but after that, yeah, laugh all you want. There’s no limit on how many times you can borrow a boat (bowriders, pontoons, fishing boats, etc.), and FBC has some 285 locations worldwide, including four around here: three down the Shore and one in Delran, on the Delaware. Look at you. You’re the captain now.

Don’t go swimming with the Devil.

“We’re trying to spread the word that there are injuries every single year — really life-altering injuries,” says frustrated Ott Lovell. She recalls a young man who was carried out by medics last year because of a spinal injury. “It’s devastating.”

It doesn’t help that this rock-lined basin along the Wissahickon is situated deep in the woods. Bathers need to approach by foot. “If and when something tragic does happen, it’s really hard to get emergency vehicles in there to get the person out,” says Ott Lovell.

And then there’s the water, which the U.K.’s Guardian last year described as “a fecal-coliform-tainted cocktail of treated wastewater and storm runoff.”

In recent years, neighborhood groups have floated the idea of filling Devil’s Pool with rocks to kill its popularity as a swimming and gathering spot once and for all. But this is Philly, so people might just keep on diving in anyway.

Published as “Making a Splash” in the July 2021 issue of Philadelphia magazine.