For starters, it has a Mission Taqueria inside. 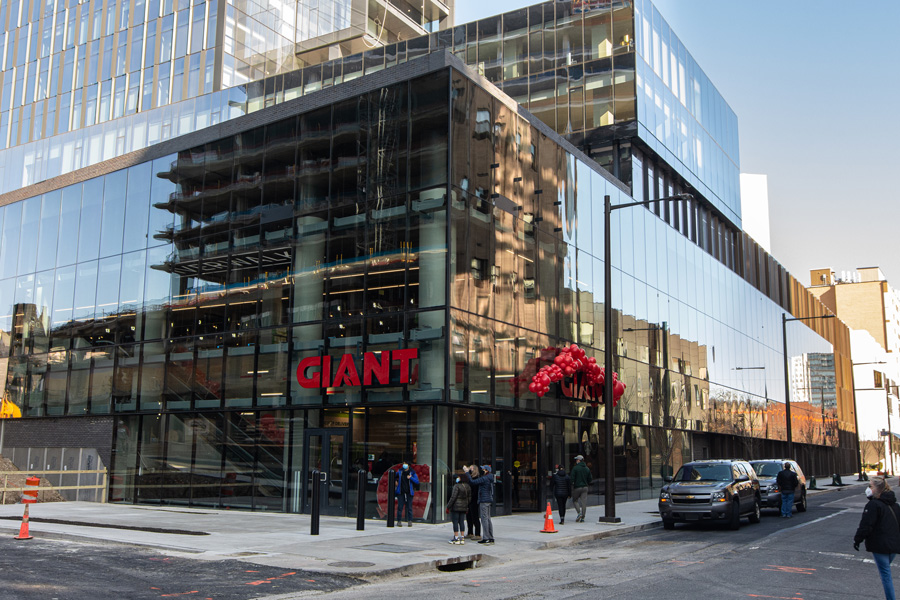 Over the past few years, Philly has seen not only a number grocery stores opening, but entirely new-to-the-region chains and brand-new concepts launching here for the first time ever. It’s been what Nicholas Bertram, the president of the Giant Company, calls a “major renaissance” for the city’s supermarket scene.

Part of that revival has been the Giant Company itself, which started opening the experimental — as well as compact and neighborhood-focused — Giant Heirloom Markets in Philadelphia in 2019. But while those smaller markets — of which there are now three in Philly — focused on bringing local foods and produce to spots around the city that may not have the square footage available for a large-format store, Giant’s latest opening is anything but small. 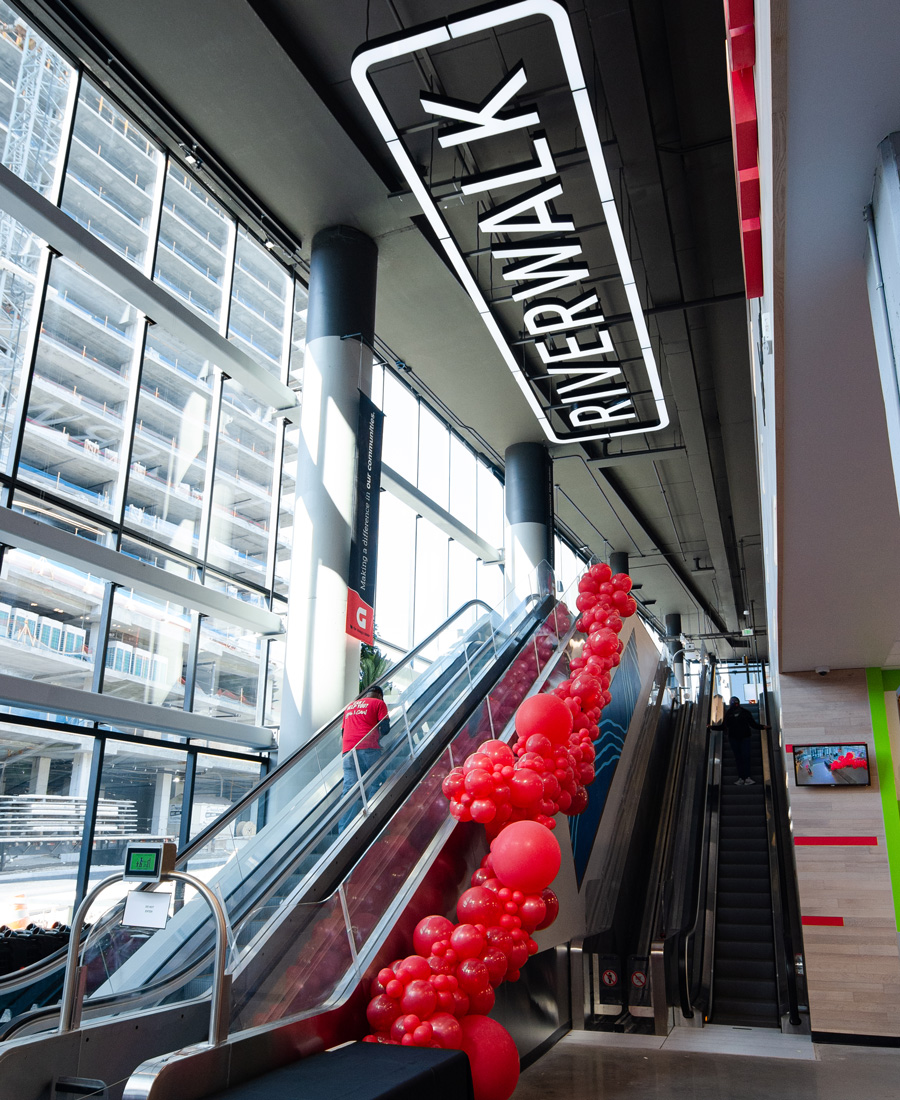 Inside the new Giant Riverwalk. Photograph by Tonya Russell

On Friday, the Giant team opened a huge, two-story, 65,000-square-foot shop in Logan Square, named the Riverwalk location. This new shop, which is equipped with parking, is now open and ready to serve as your go-to market — and it’s prepared to entice you with its abundant amenities. Here’s a few to know about before you go: 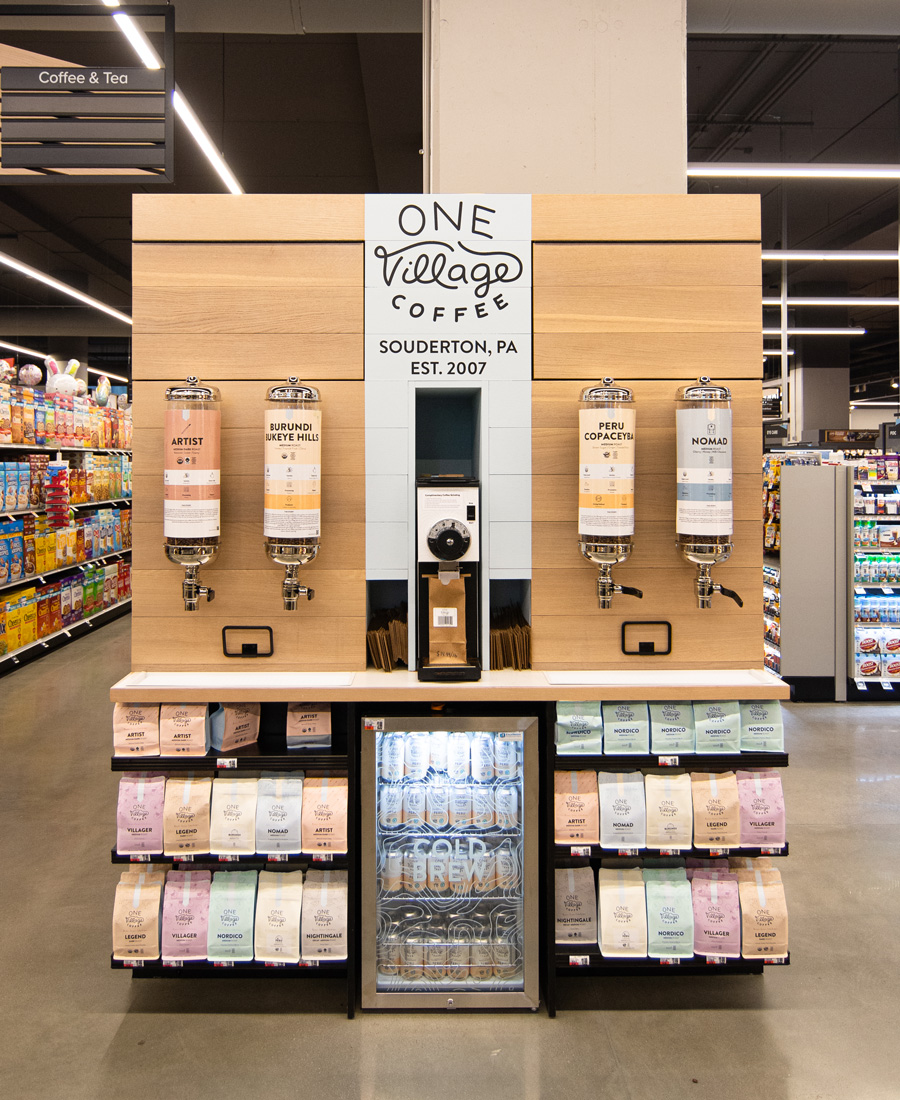 Giant knows how to cater to its audience, and that’s why Philly flair is felt in every department. Locally made goods for sale include Philabundance’s Abundantly Good cheese label, One Village Coffee, High Street on Market bread, Asher’s Chocolates, Isgro Pastries, and Caputo Brothers Creamery artisan cheese. 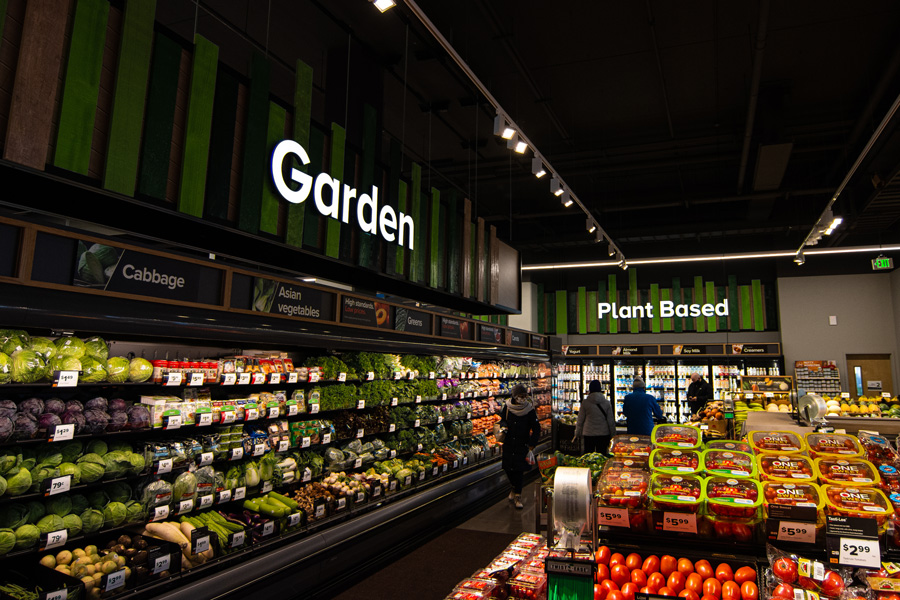 There’s tons of fresh produce and plant-based options in the store. Photograph by Tonya Russell

Giant hopes that you feel inspired to try something new at their latest location, and with over 600 varieties of produce (much of it locally-sourced), you are bound to stumble upon something you haven’t tried yet.

After plant-based options flew off the shelves at their Heirloom Markets around Philly, Giant decided to make the plant-based section at this flagship their biggest offering yet. Whether you’re looking for vegan cheese, ice cream, or meat substitutes, you’ve got plenty of options. (But if you do want meat, the store also boasts a full-service, extensive meat and seafood department, including beef cuts that are aged for 42 days in-house.) 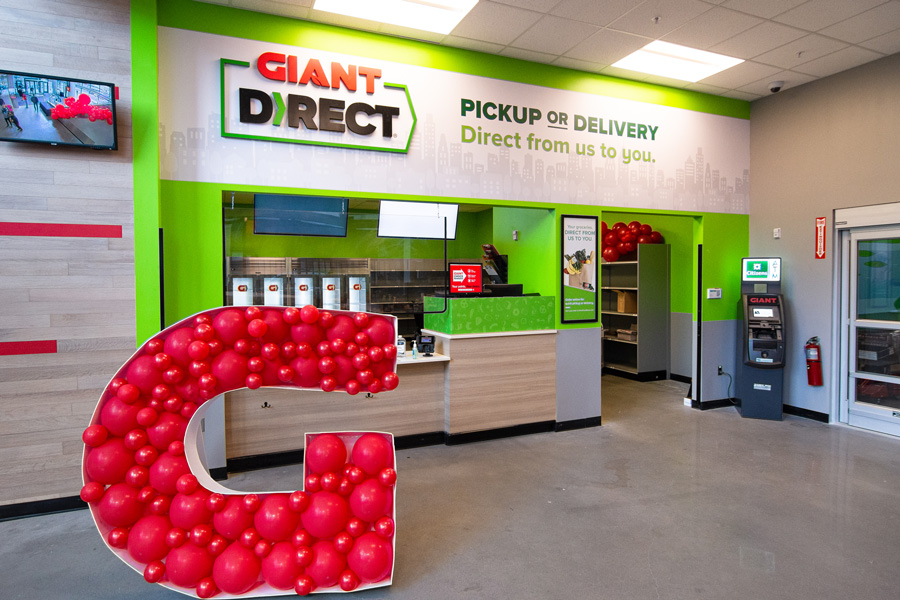 Grocery pickup is easy with the Giant Direct station. Photograph by Tonya Russell

One thing we’ve seen throughout the pandemic is the value of curbside and no-contact pickup options. For those who don’t enjoy a food shopping trip or who are still limiting their time in stores, Giant offers online ordering for fast pick up at the Giant Direct station. 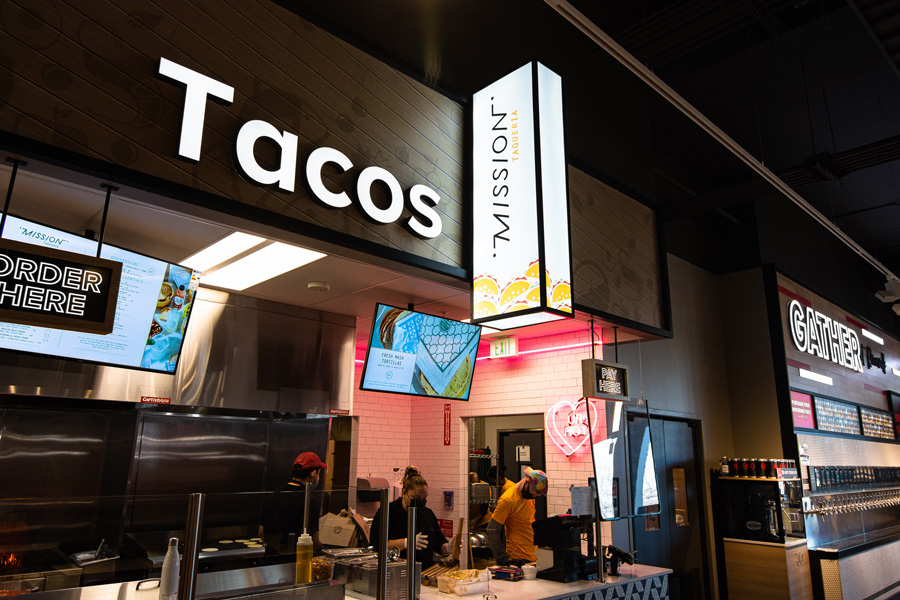 Mission Taqueria is located in the store’s food hall. Photograph by Tonya Russell

5. A “Food Hall” with Mission Taqueria 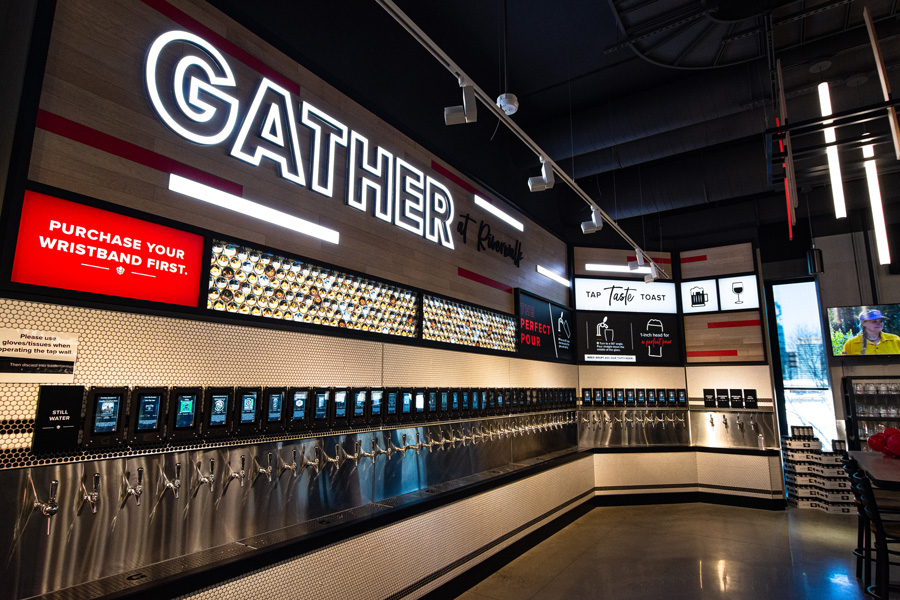 The on-site beer garden features over 40 varieties beer and wine on tap. And after grabbing a meal and beverage, you can head out to the open-air terrace overlooking the Schuylkill to enjoy your treats by the fire pits. 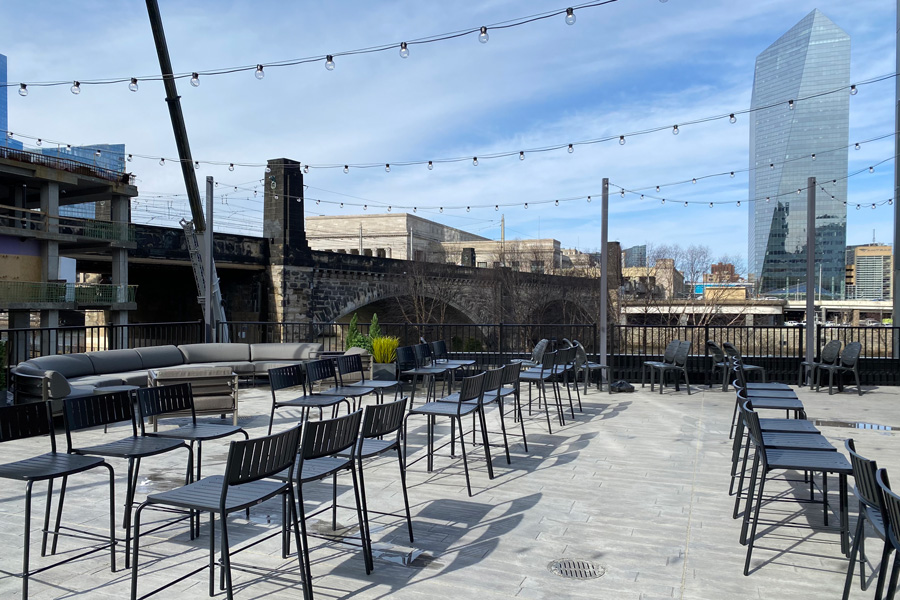 The terrace where you can enjoy a meal and a beverage in the open air. Photograph by Tonya Russell 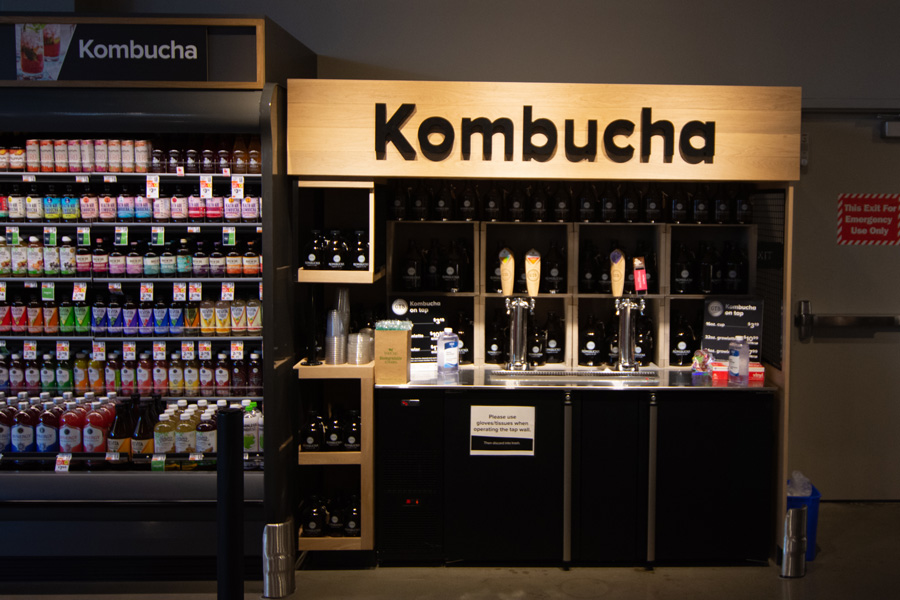 The shop has a kombucha station, with kombucha on tap. Photograph by Tonya Russell

Sure, you’ve heard of a beer growler, but what about a kombucha growler? At the new Giant Riverwalk, you can fill your growler with several varieties of GT’s kombucha on tap.

Riverwalk will be donating leftover food to Philabundance, and they support Sharing Excess, a local charity that helps restaurants and grocers directly share their unsold items with families in need.

Ready to see it all for yourself? The new Giant is now open at 60 North 23rd Street.