The first high-brow version of the grocery chain opened in Graduate Hospital Friday — and boy, is it beautiful. 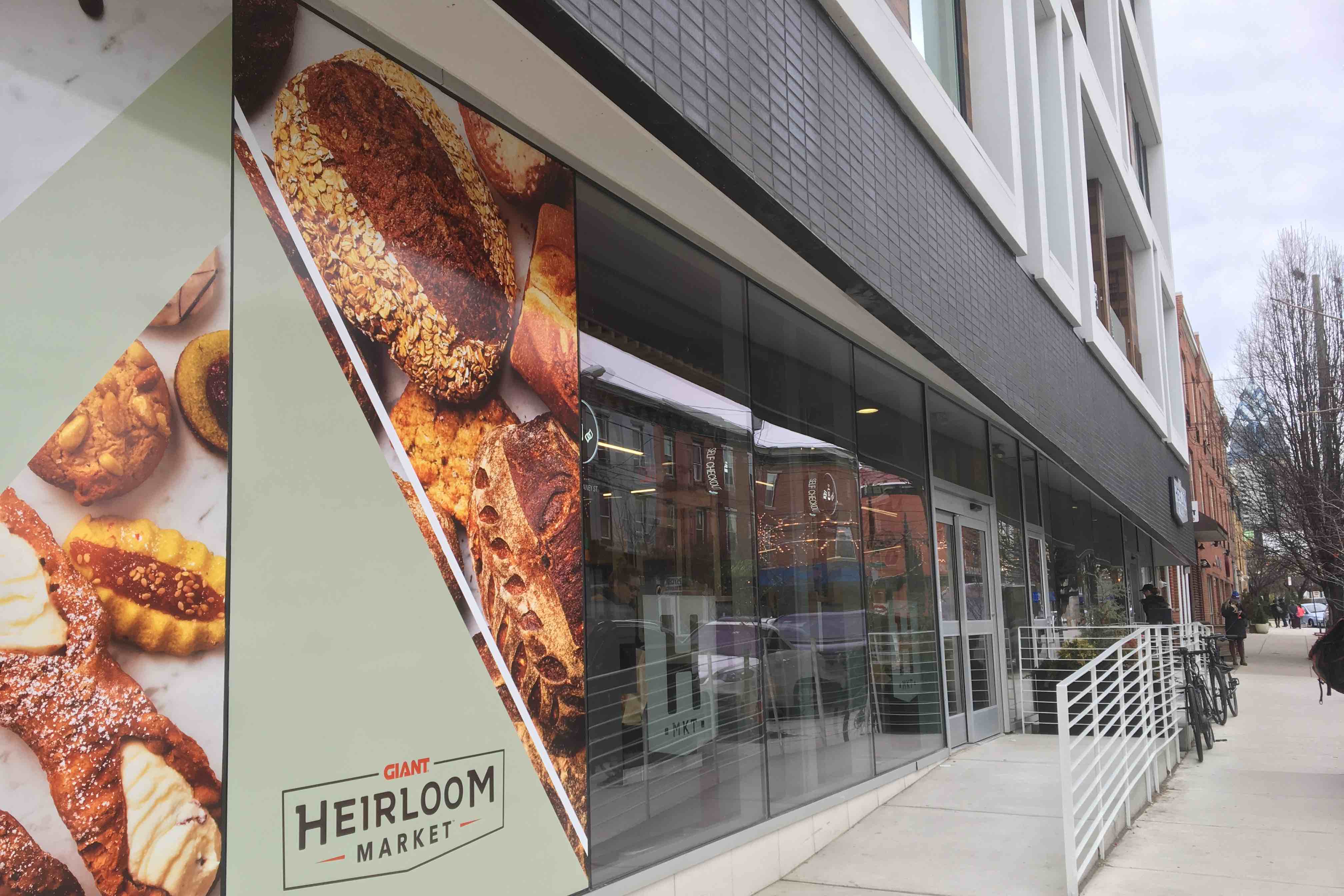 Typically, Giant grocery stores are…fine. If you’re familiar with the mega-chain, you understand it as being like every other standard supermarket. It’s a place where you can pick up kitty litter and a mop along with your boxed mac and cheese. A place you go to buy condiments at reasonable prices. A place that’s a bullet on your to-do list, not a destination.

That changed when the first Giant Heirloom Market opened Friday in Graduate Hospital. Although the 9,500-square-foot store is small — as in, do not venture inside on a Sunday if you have strong feelings about personal space — it glitters with fresh produce; shows off products made by local foodie stalwarts (think: Isgro Pastries); and boasts a wealth of New Age amenities, such as on-tap kombucha, that allows this elevated version of Giant to compete with Whole Foods Market and Sprouts Farmers Market instead of Acme and Aldi. It’s a place you circle on your to-do list. Here, a few more reasons why. 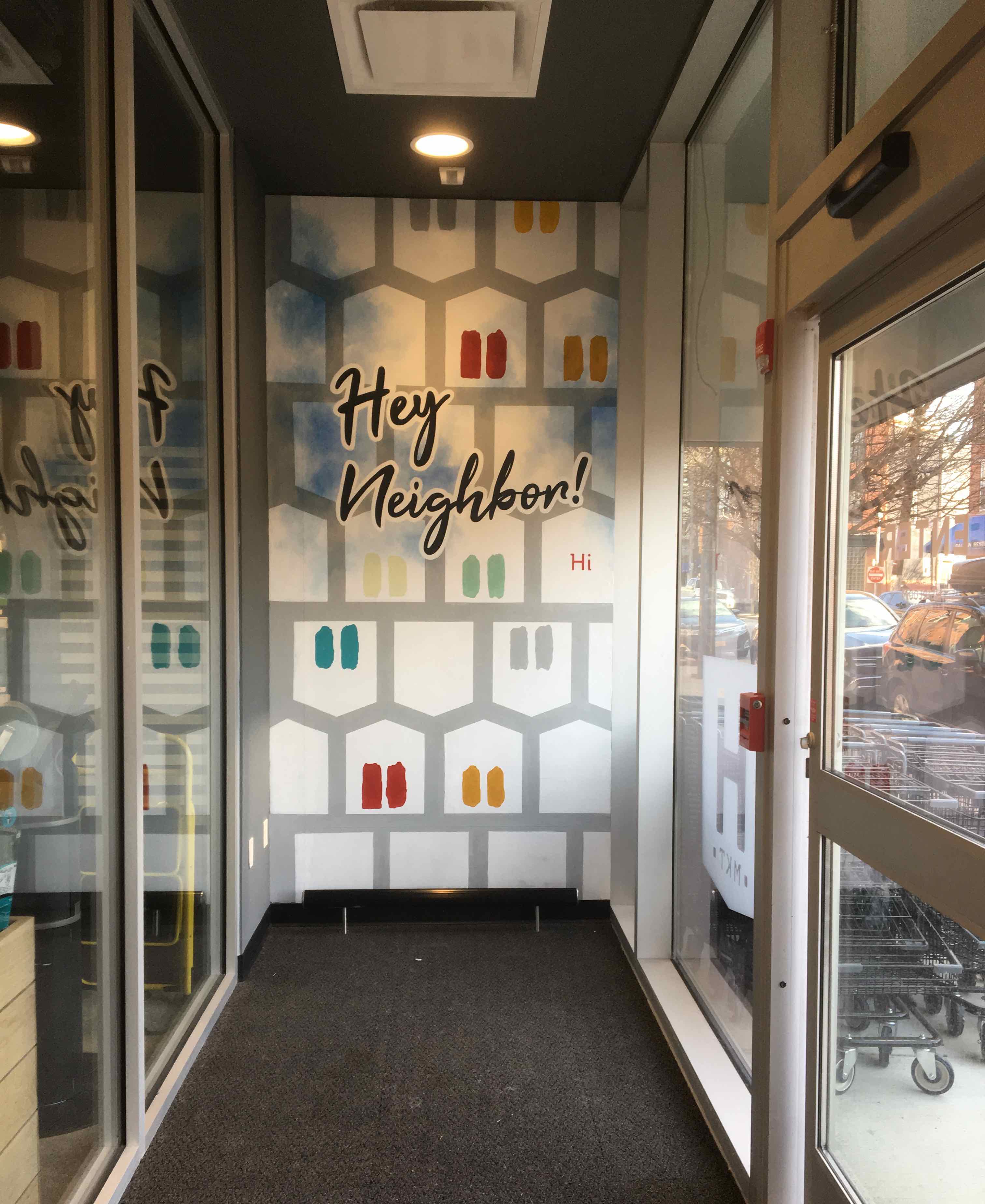 Philly artist Ali M. Williams created charming murals to decorate Giant Heirloom Market’s entrance, exit, and community gathering space. Her favorite part to paint? The clouds. “I like the effect they give,” she says. “It makes it feel like you’re in this dream.”

It’s organized by what people might need to buy together. 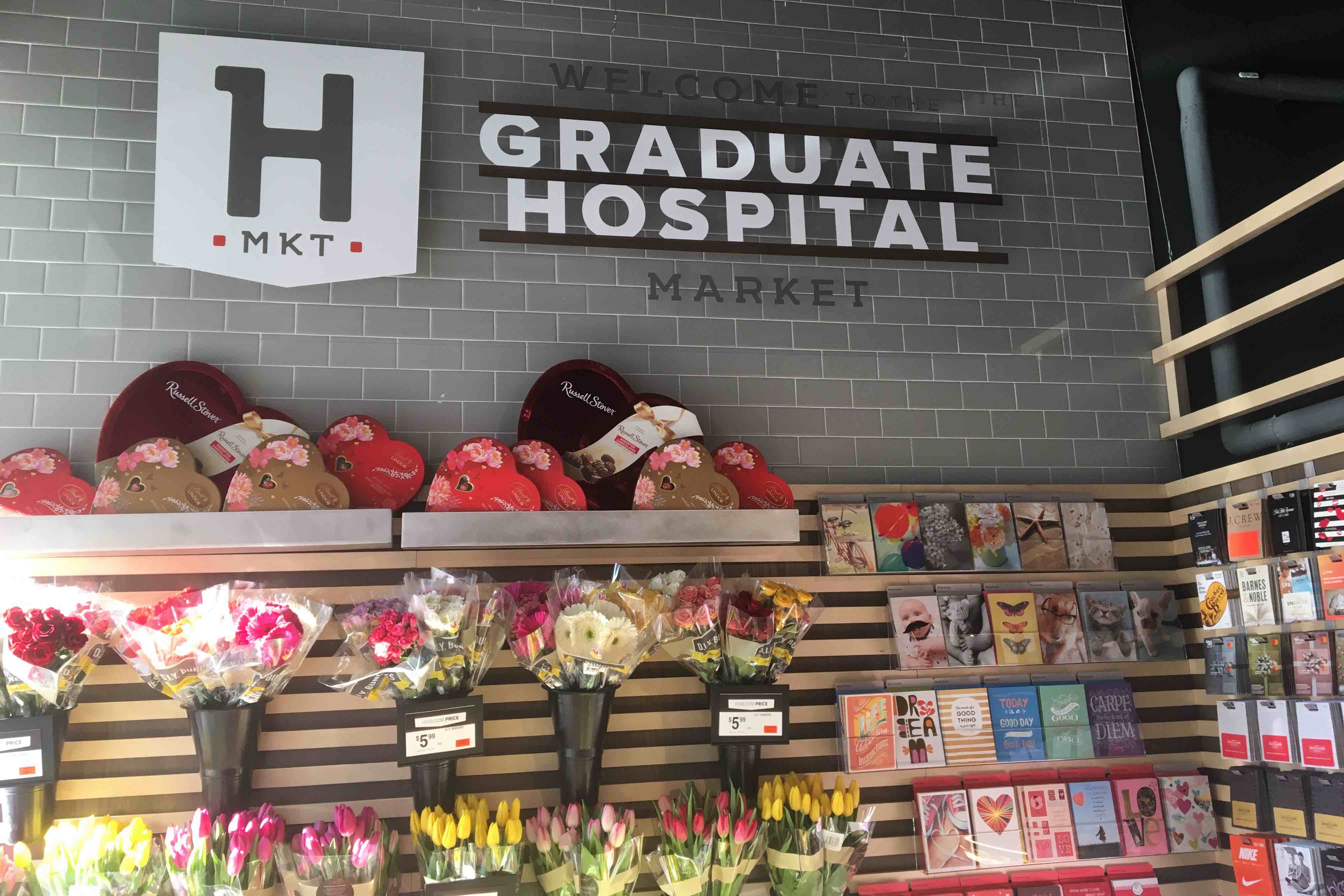 The new Giant Heirloom Market doesn’t have official departments, instead arranging items that customers might need to buy together next to each other. / Photograph by Mary Clare Fischer

Next to the bouquets of flowers are greeting and gift cards. The spices sit near the meat and seafood. Cookbooks are arranged by the sample station, providing recipe inspiration to turn the bites you’re tasting into meals. True genius. 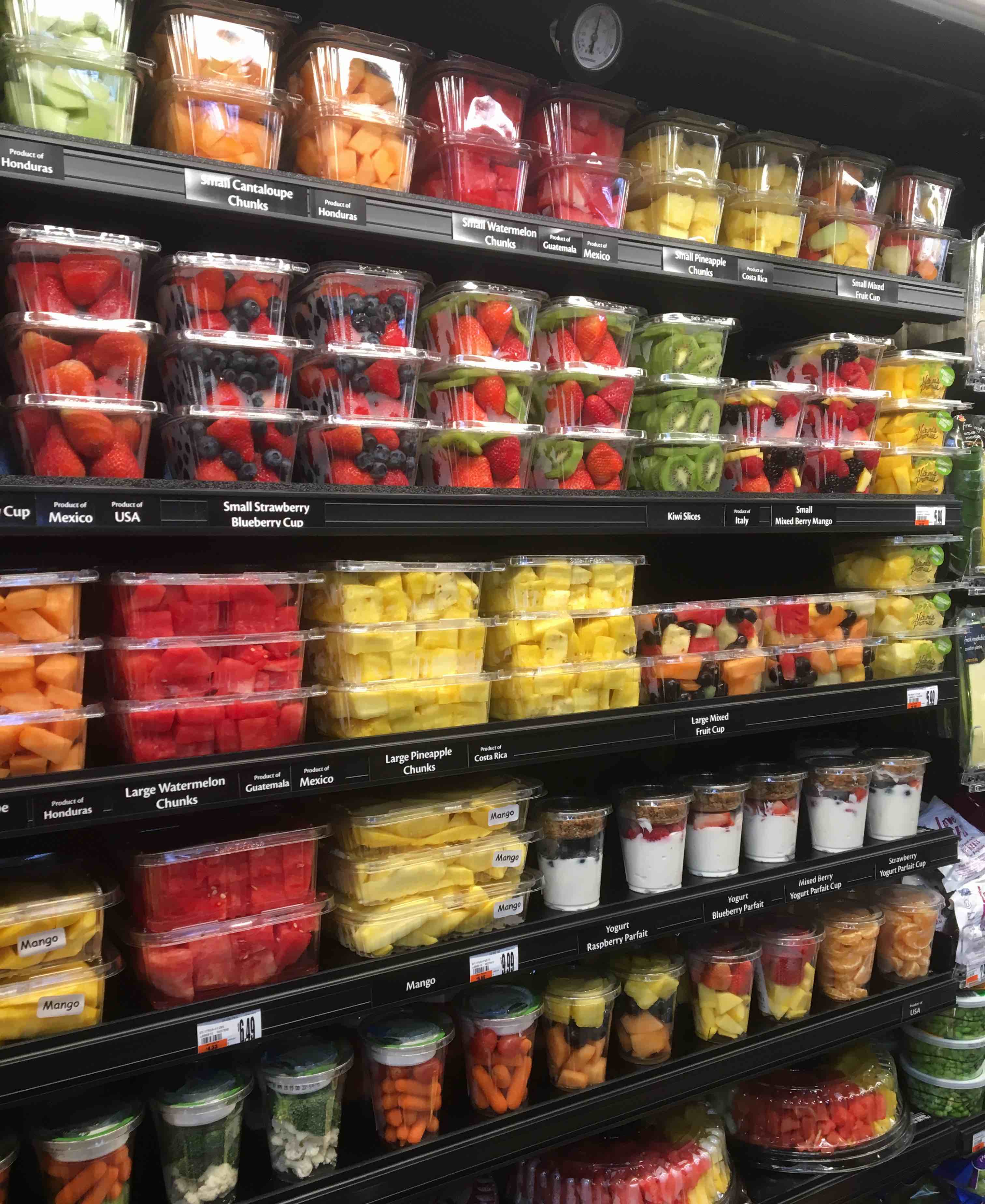 The back counter, known as Heirloom Kitchen, is where fresh fruit is cut every morning. /Photograph by Mary Clare Fischer

Known as Heirloom Kitchen, the counter in the back of Giant Heirloom Market functions as a deli — with a panini press to gourmet-ify sandwiches and a sushi chef who can customize your California rolls — and coffee bar during the morning, but it turns into sample central in the afternoon. “Sometimes, when you’re in the grocery store, you don’t get food into your mouth,” says Paul Madarieta, the director of growth initiatives for Giant, who gave us a tour of the new store. “You use your eyes, ears, nose, hands but not your mouth, and that didn’t make sense to me.”

The produce section is impressive. 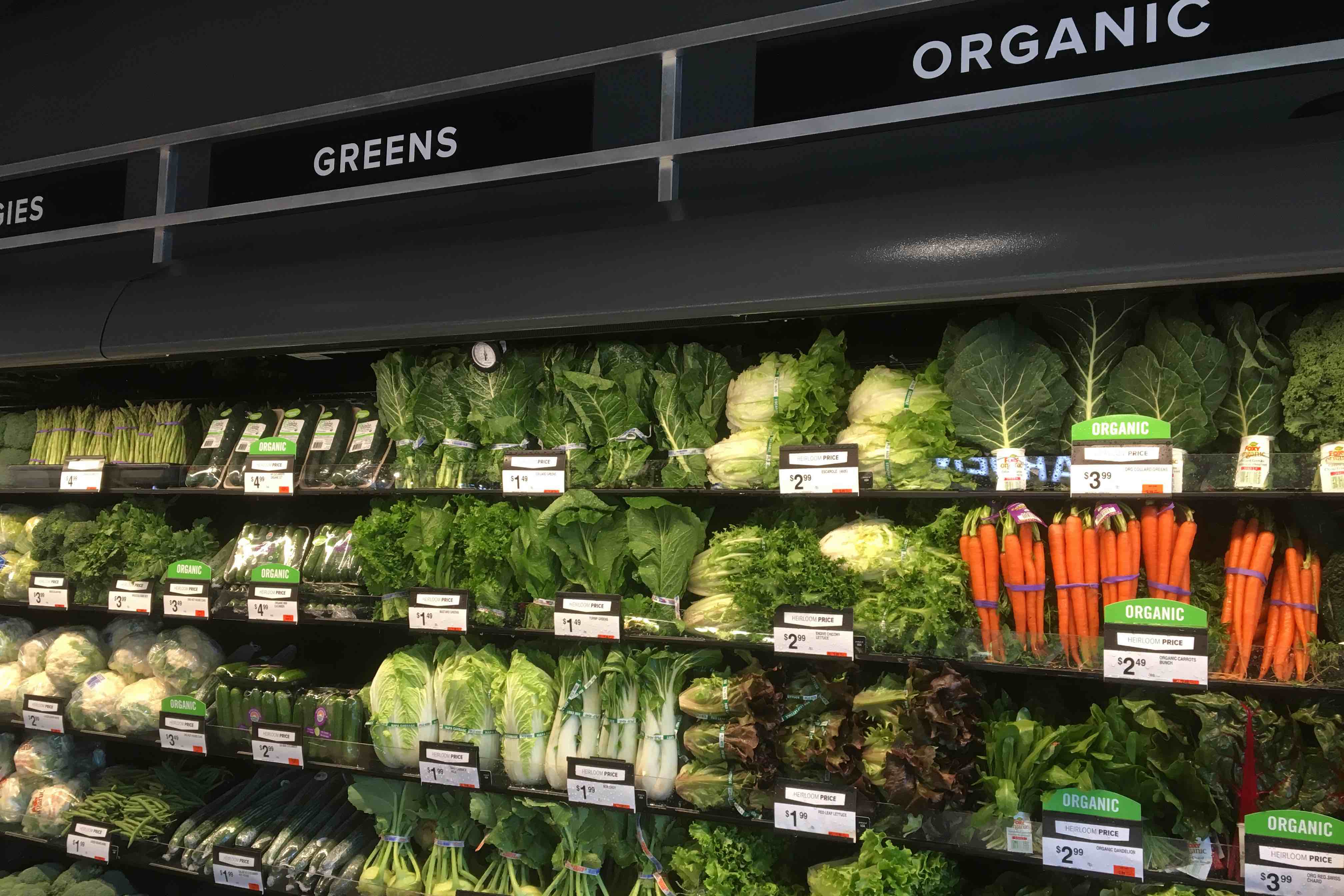 About a third of Giant Heirloom Market is devoted to produce. / Photograph by Mary Clare Fischer

Madarieta says he and his staff spent five to six months talking to neighborhood residents to see what they wanted out of a new grocer, and the near-unanimous response was produce. Fruits and vegetables now take up a third of the store.

And the “plant-based” food section is nothing to sniff at. 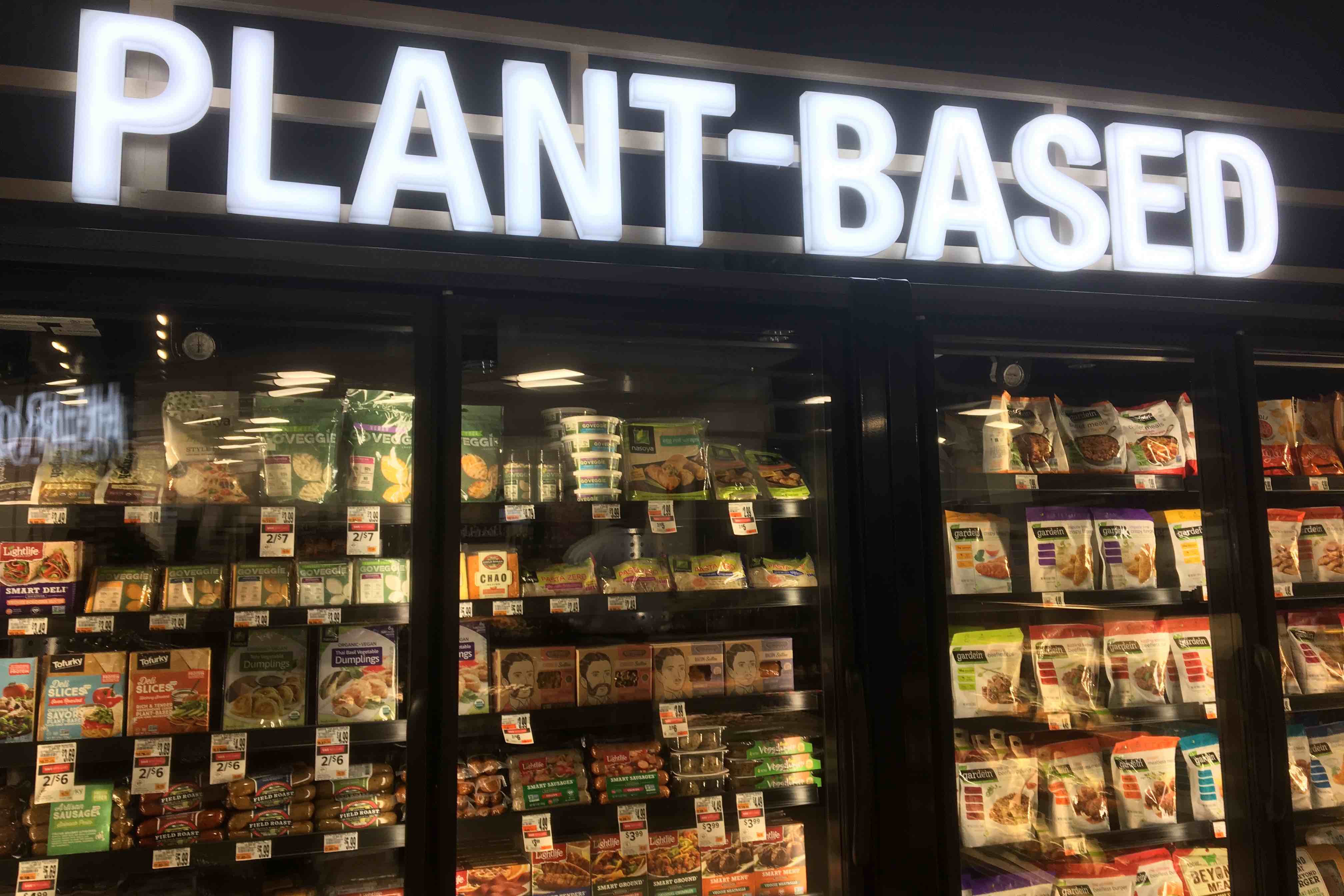 Vegetarians can find all the meat replacements — tofu, veggie burgers, seitan crumbles — their fake-protein-loving hearts desire. (Sprouts has a similar set-up, except it separates refrigerated and frozen items.)

But Giant Heirloom Market has also made a commitment to local food vendors. 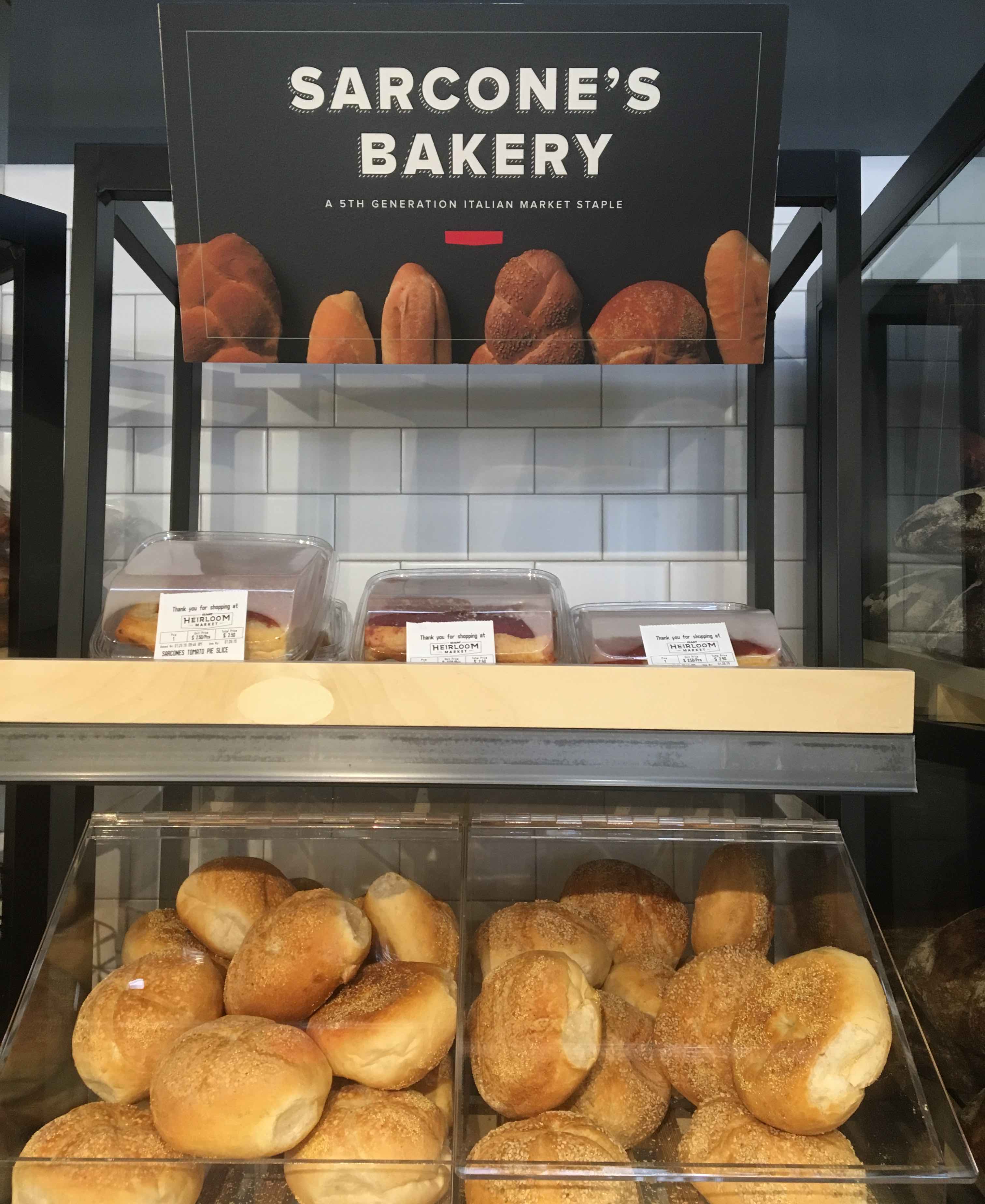 Local food vendors, such as Sarcone’s Bakery, have a significant presence at Giant Heirloom Market. / Photograph by Mary Clare Fischer

The wine section is stellar — and you can chill your bottle on location. 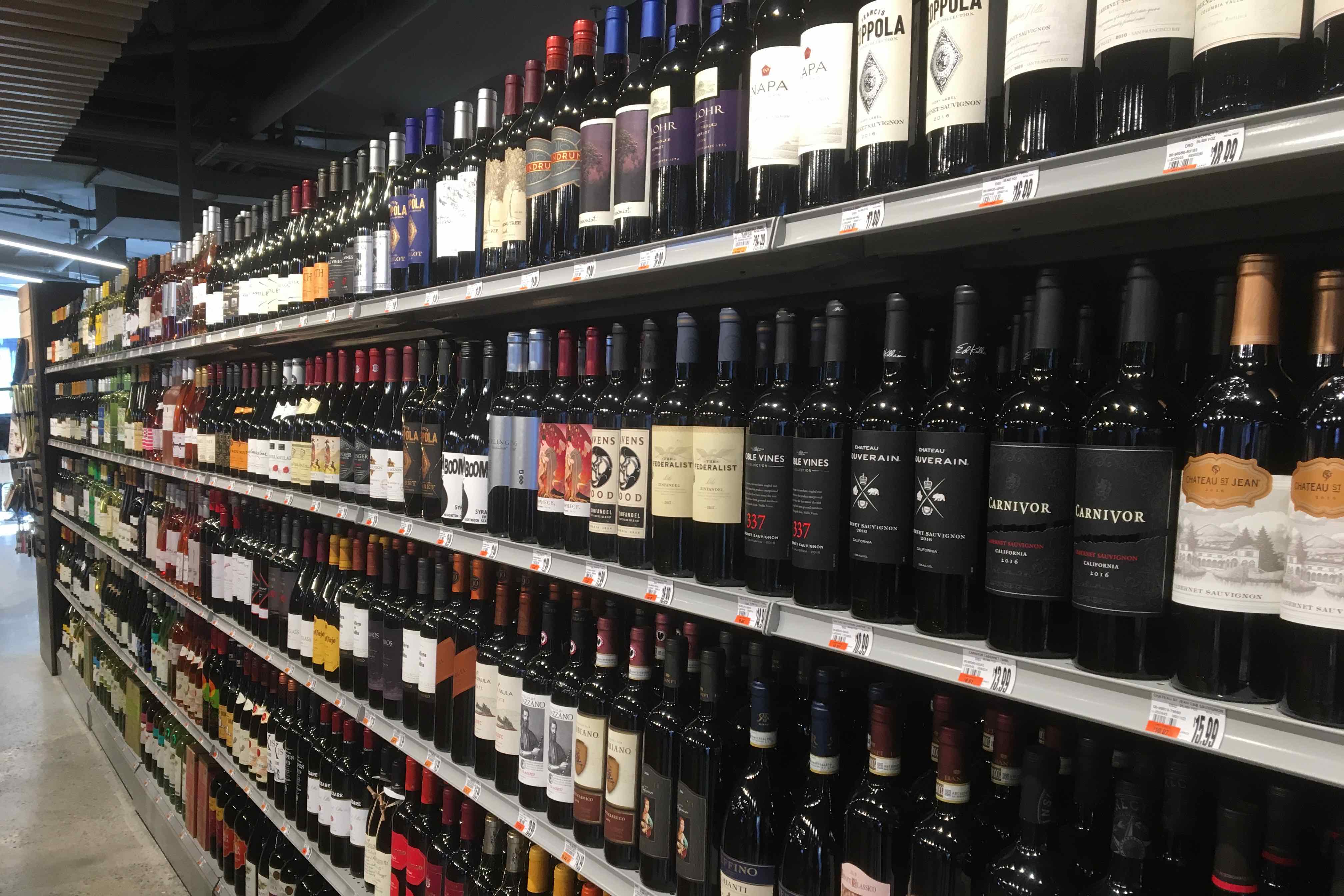 The wine selection at the new store is impressive. / Photograph by Mary Clare Fischer

None of the wine at Giant Heirloom Market is chilled. BUT you’re not out of luck if you’re picking up a Sauvignon Blanc for a dinner party because you can just pop the bottle in the chiller for 90 seconds, and it feels like it’s been sitting in the fridge for hours. (Our minds were blown by this.) It doesn’t hurt that Madarieta, a longtime vino lover, has curated the selection to introduce shoppers to more elevated varietals than you’d expect in a Giant: Riojas from Spain, Chiantis from Italy. He even vetted all his picks with Vivino, a massive database of wine reviews, to make sure others agreed with his tastes before shopping the bottles to customers. And if you’d rather stay close to home, locally made wines are available, too.

You can socialize on purpose here. 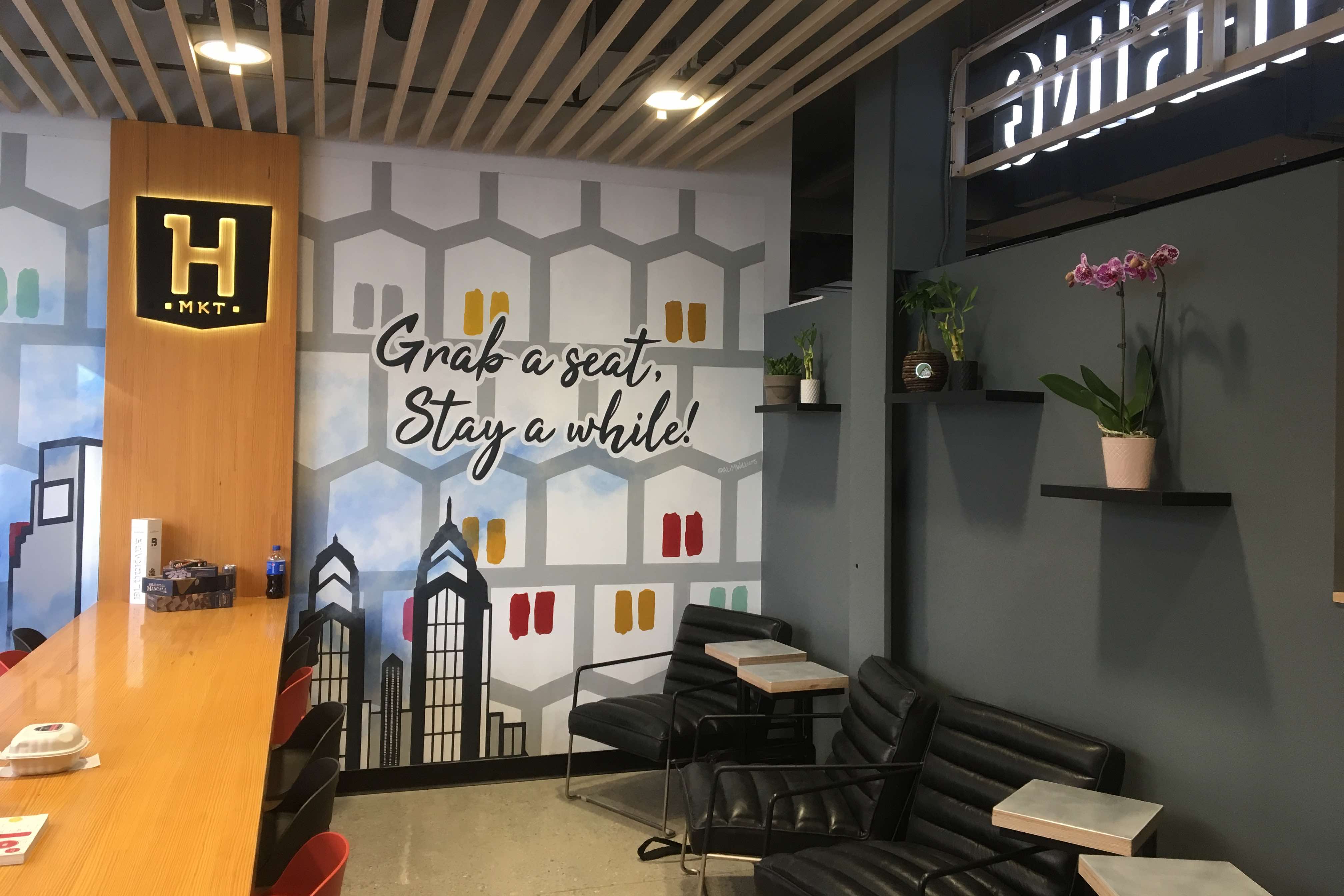 Giant Heirloom Market has a community area where people can hang out or work. /Photograph by Mary Clare Fischer

Instead of accidentally running into a friend and chatting in the aisles, invite a pal to grab coffee and reconnect over Giant Heirloom Market’s reclaimed wood table in its community area. Or plug your laptop into one of the many outlets and get some work done in a nontraditional space.

There’s kombucha on tap AND a station where you can blend your own olive oil or vinegar. 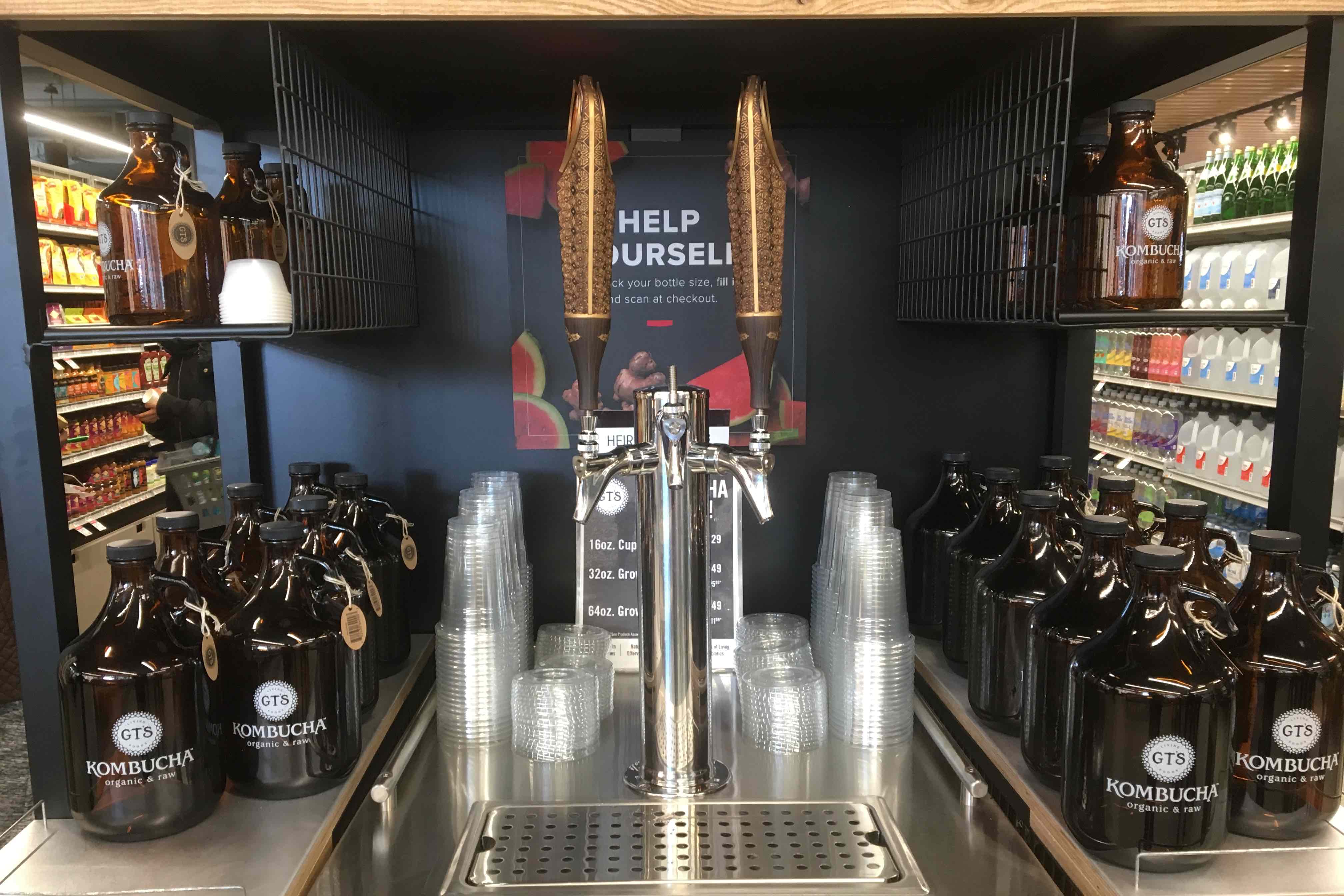 Because who doesn’t like on-tap kombucha? / Photograph by Mary Clare Fischer

Can you say trendy?

The store is 100 percent self-checkout.

Employees roam around to help if something goes wrong, but you’re the one doing the scanning and bagging. Speaking of which, Giant Heirloom Market stocks exclusively paper bags because the world needs saving from landfills, and we guarantee you already own enough plastic bags to line your garbage cans for years. 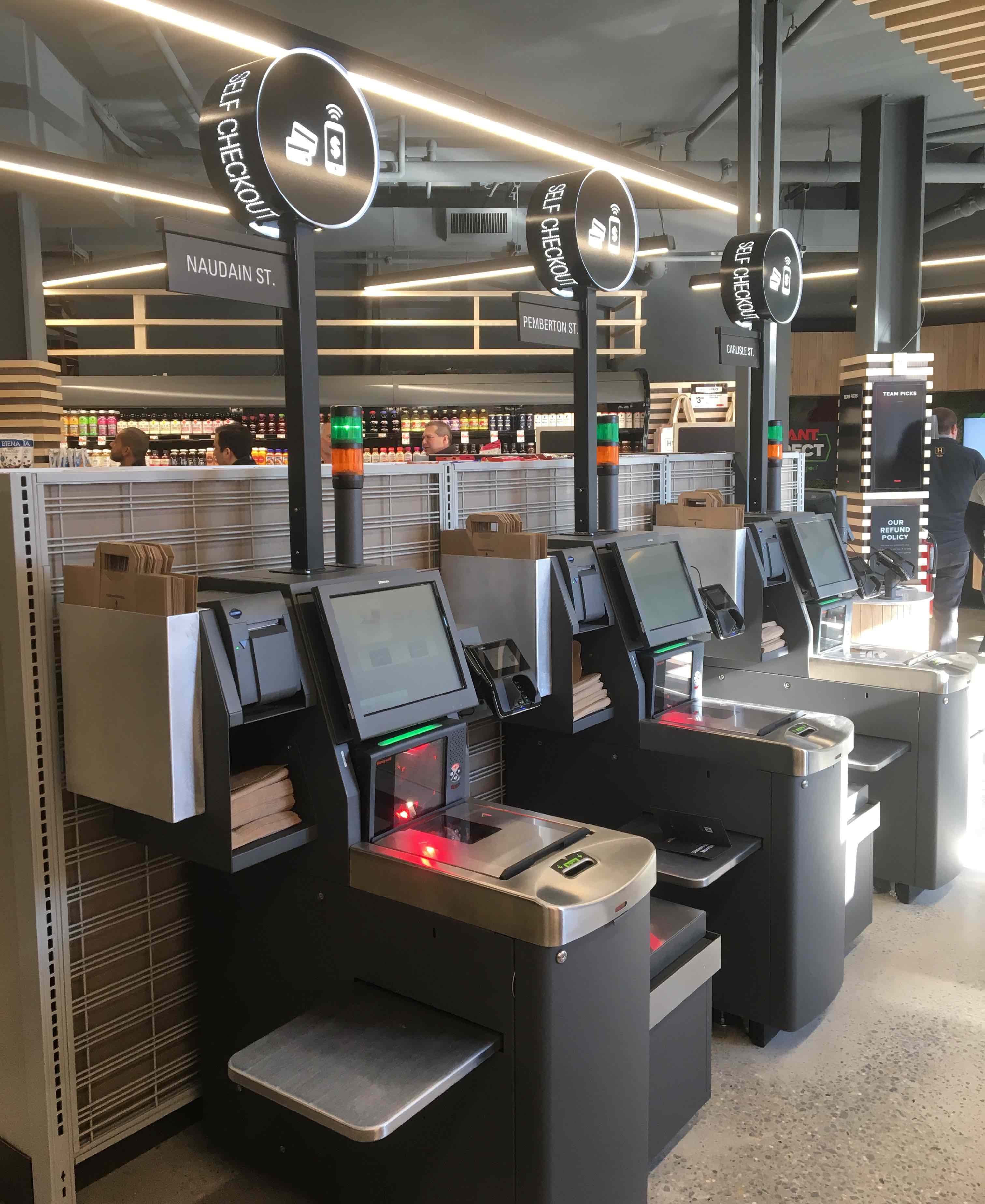 Each self-checkout station is named after a street in the Graduate Hospital neighborhood. / Photograph by Mary Clare Fischer