Where to Eat (and Drink!) by the Water Around Philadelphia

Sip cocktails on a ship, dine on a pier, or grab burgers on a 12-story rooftop overlooking the Schuylkill.
By Maddy Sweitzer-Lammé· 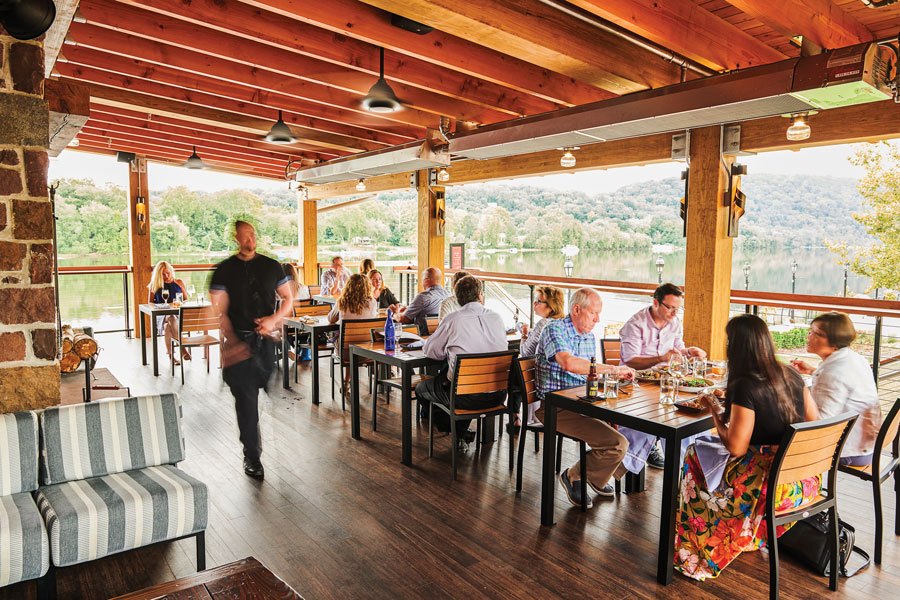 For a city surrounded by water, there’s a surprisingly limited number of waterfront dining options in Philadelphia. But the options we do have are pretty nice: the sprawling piers at Penn’s Landing, the intimate dining rooms in New Hope, and even a new grocery store with a sunny, casual patio overlooking the Schuykill. The views are beautiful and the drinks are cold, and that’s really all we need for peak summer dining.

The Landing Kitchen, Bala Cynwyd
Nick Elmi and Fia Berisha opened what could be brushed away as just another Marriot cafe — but the Landing Kitchen isn’t that at all. The menu is stocked with picture-perfect toasts, hearty salads, and coffee drinks that encourage lingering on the restaurant’s waterfront patio.

A post shared by Stella of New Hope (@stellanewhope)

Stella of New Hope, New Hope
While a lot of waterfront options tend towards beer and a burger vibes, Jose Garces’s Stella in New Hope gives off more of a romantic bottle-of-wine-and-house-made-pasta energy, which makes a lovely ending to a day trip to New Hope.

Great Barn Taproom, New Hope
Great Barn Taproom is technically situated on the canal, not on the river, but it’s waterfront nonetheless. Plus, they have a wide selection of creatively brewed beers, and very cheap pierogis — a match made in heaven.

The Patio at Giant, Logan Square
You’ve probably heard about the new Giant on the Riverwalk. It’s enormous, and there are many elements to love, but perhaps the best part is that you can enjoy a beer and some Mission Taqueria overlooking the river before or after you shop.

Moshulu, Penn’s Landing
Is it cheesy to eat on a boat that never moves? Yes. Do we love it anyway? Also yes. It’s an excellent place to wile away a summer afternoon, drink in hand, and pretend you’re somewhere other than the city.

Morgan’s Pier, Penn’s Landing
Morgan’s Pier will reopen for the 2021 season on April 22nd, with all the summer necessities: beer, cocktails, and classic bar foods like sandwiches, wings, and flatbreads.

The Garden at Cherry Street Pier, Penn’s Landing
The Garden opened in 2020 with everything we needed at the time: outdoors, tons of greenery, and a full 20,000 square feet of open-air drinking and eating space. It’s now back for 2021, and it turns out we still need each and every one those things.

Manayunk Brewing Company, Manayunk
If the crowds at the piers in Philly feel like a bit much, head a little out of town to the chill vibes of Manayunk Brewing Company, where you can enjoy a microbrews, soft pretzels, and macaroni and cheese, among other delights. Bonus: it’s easy to bike from Center City on the Schuykill River Trail if you want to make a day of it.

Sunset Social, University City
While Sunset is not technically waterfront, it does have some of the best views in the city from its perch on top of the Cira Centre Building. From the rooftop of the 12-story building, look out over the city (and yes, the river) and enjoy all the frosé, burgers, and loaded tots your heart desires. During the off-season it’s picnic only, but food from the team behind the downstairs Walnut Street Cafe will return April 19th.