A First Look at One Cathedral Square

The developers of the new apartment tower rising over the Cathedral Basilica of Saints Peter and Paul saved the best views for everyone. 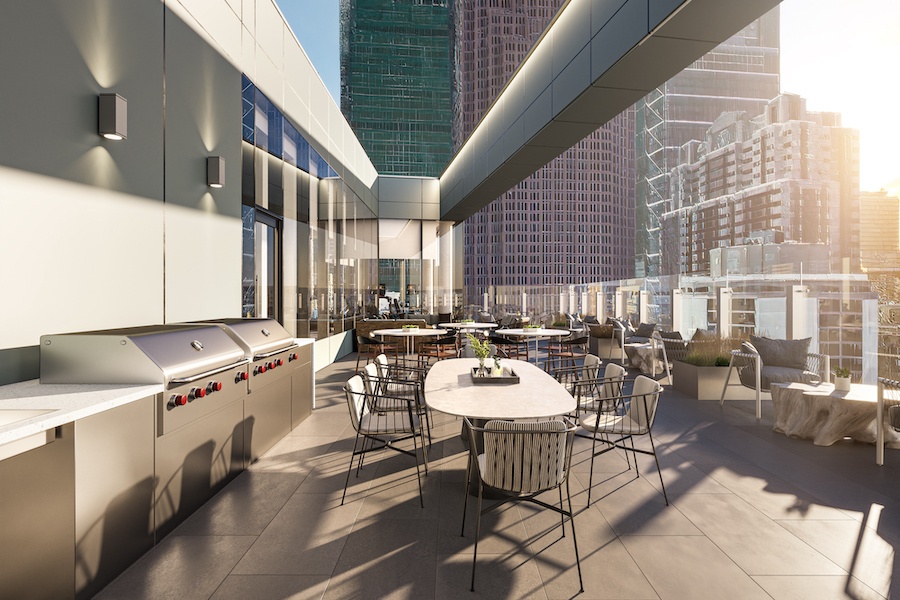 The beam over the amenity-floor terrace gives the One Cathedral Square tower a symmetrical form while not getting in the way of the amazing view of Logan Square and environs from the deck. It’s just one of the luxurious amenities this building behind Philadelphia’s Catholic cathedral offers. | This and all other *renderings and photos: LCP Media via EQT Exeter unless otherwise noted

The tenants were already moving into One Cathedral Square, EQT Exeter’s new luxury apartment tower overlooking Logan Square, when the developers and property manager The Bozzuto Group cut the ribbon on August 24th. But work crews were still in the midst of work on the most attractive feature of this 23-story tower. 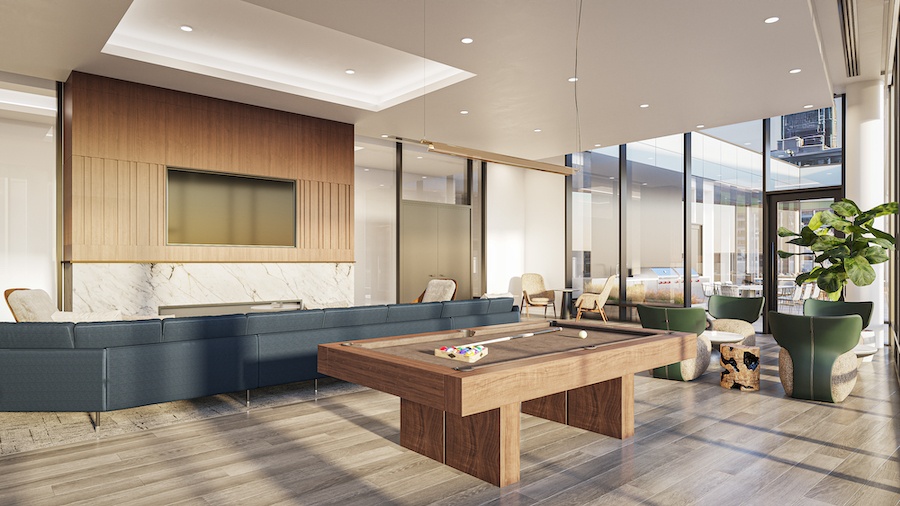 Solomon Cordwell Buenz’s design for this building put the amenities on the top floor, which means that every tenant in the building, no matter where their apartment is located, will be able to enjoy this view of the square: 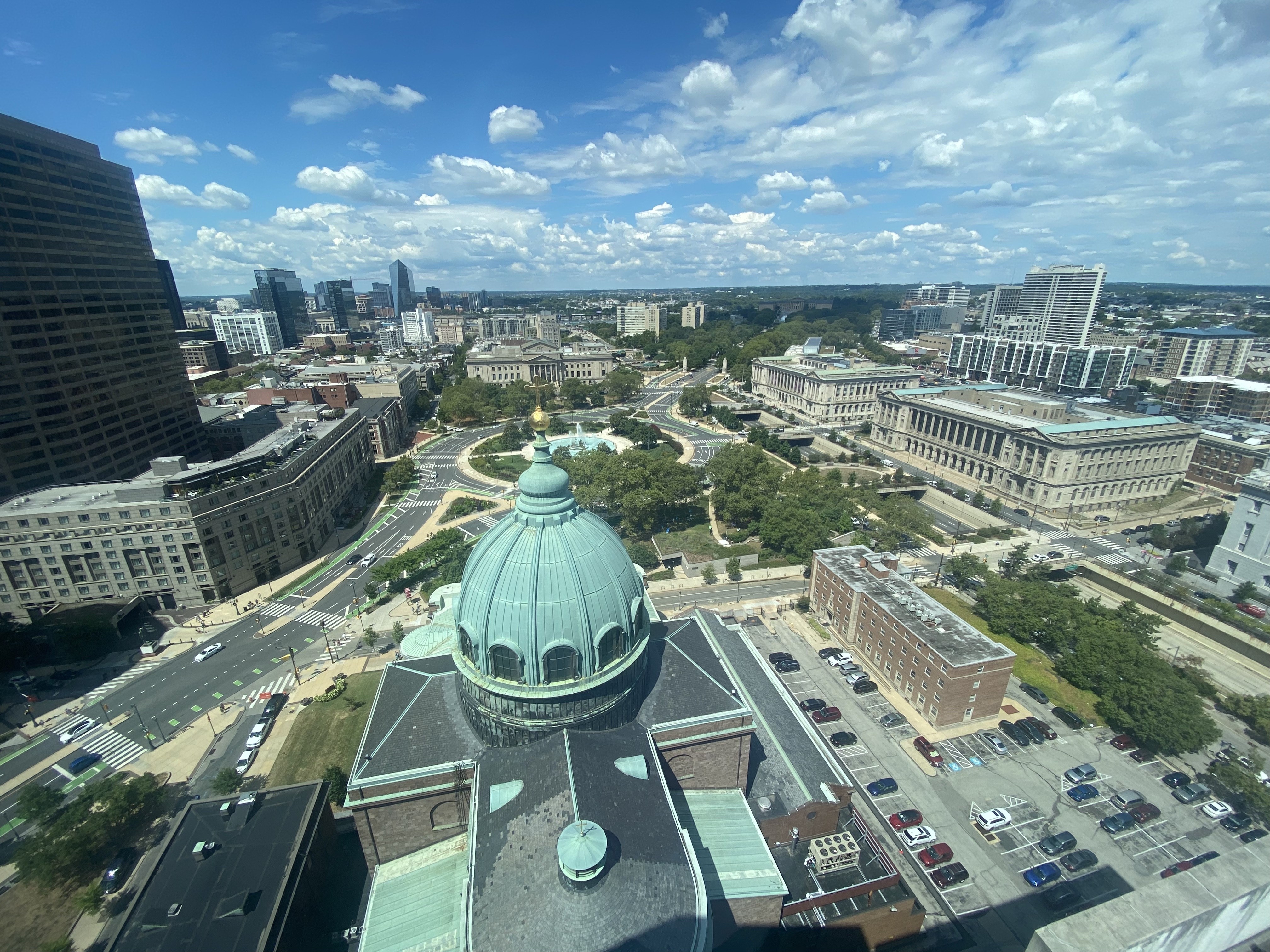 View of Logan Square and environs from the amenity floor terrace; the Cathedral Basilica of Saints Peter and Paul is in the foreground / Photograph by Sandy Smith

That view can be had from the open-air terrace on the amenity floor. 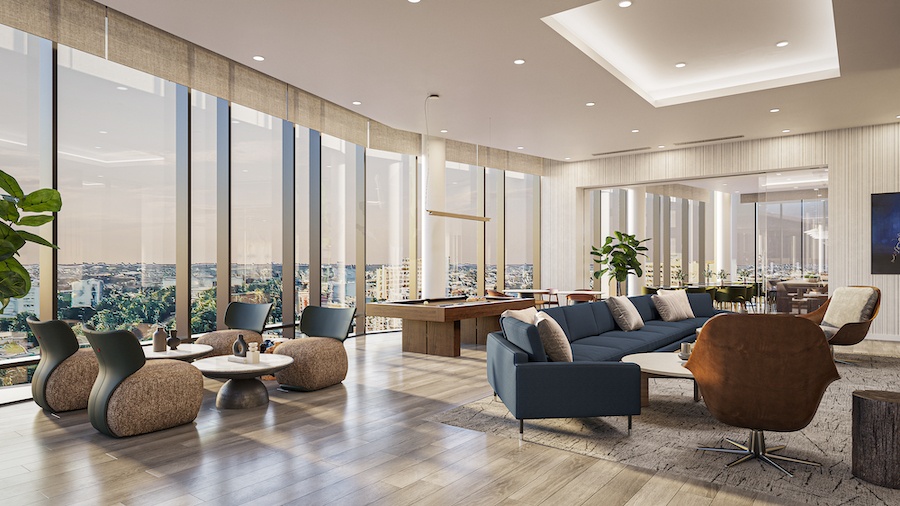 The clubroom next to it shares the view. 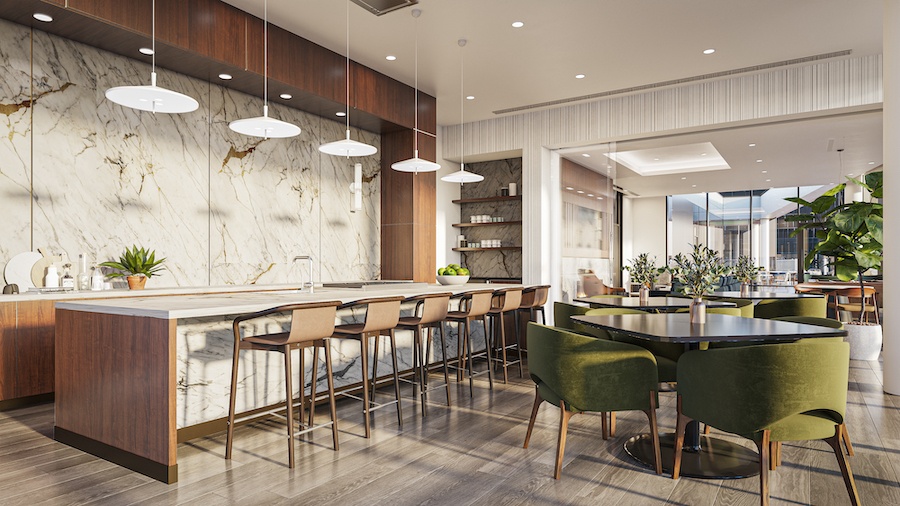 So does the demonstration kitchen next to the clubroom, which can accommodate a dinner party of 20. 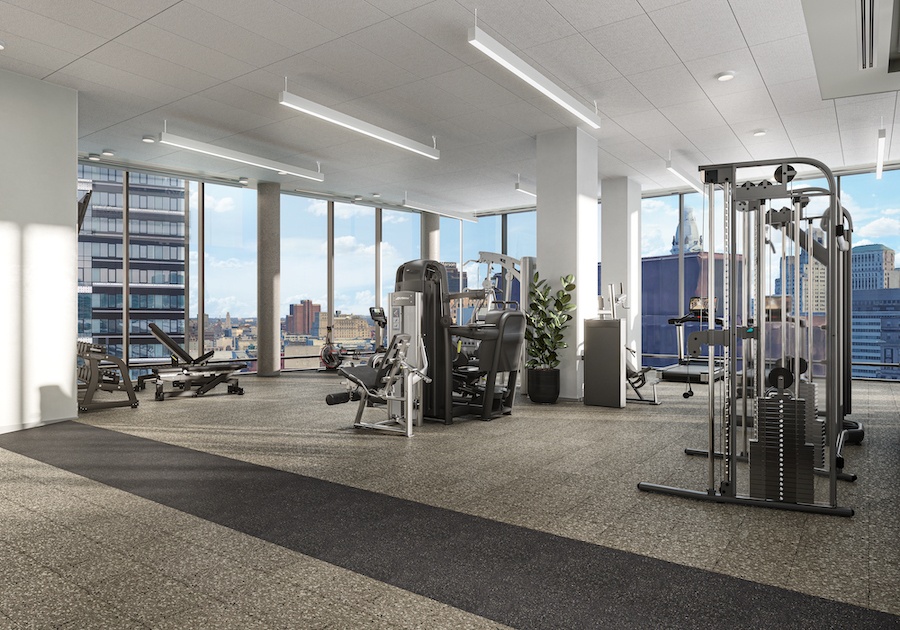 Fitness center patrons will have a great view to the south and east that also includes the Ben Franklin Bridge — and even William Penn, who rises just above Three Parkway. 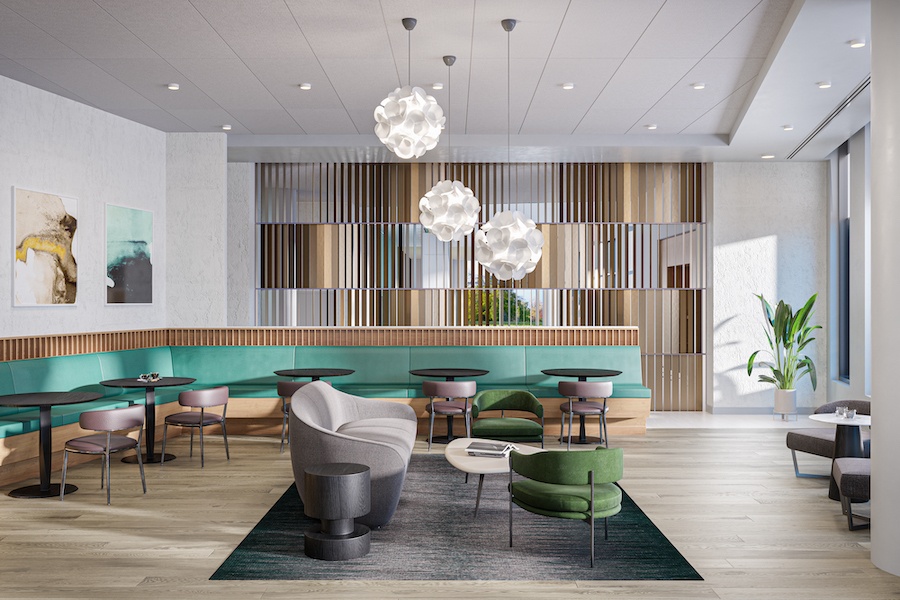 Co-working center; artwork from local artists hangs in it as well as in every floor’s elevator lobby*

The only amenity that lacks these great views is the co-working center, which sits just up a slight ramp from the lobby. This makes sense — that view would be awfully distracting.

Instead, the co-working center, which includes a conference room, looks out on a landscaped garden between this building and the back of the cathedral. 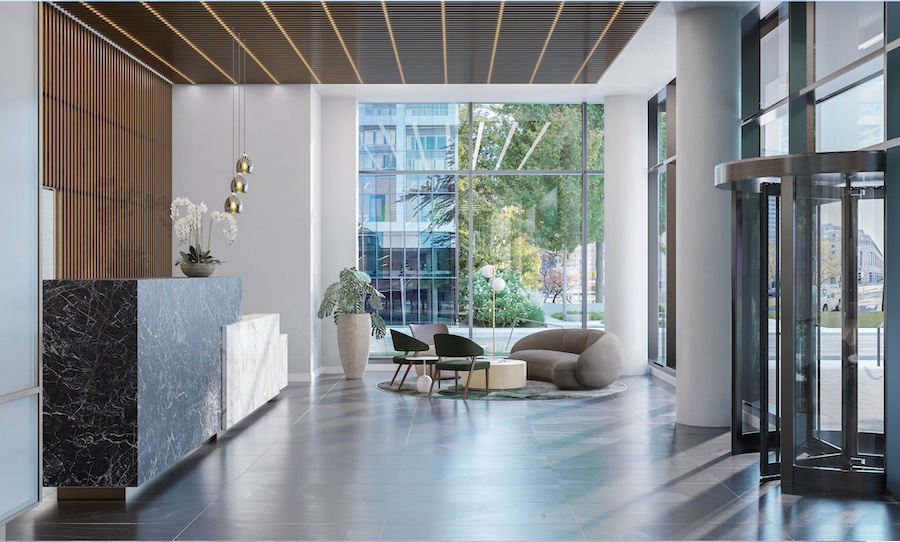 Gianni Parente, regional investment officer at EQT Exeter, explains that the garden is part of his firm’s master plan for the site, which will envelop the cathedral. One Cathedral Square is the first of two apartment towers the company plans to build on land it has leased from the Archdiocese of Philadelphia for 150 years.

“The church thinks in centuries,” says Parente. “We think in days and weeks.” 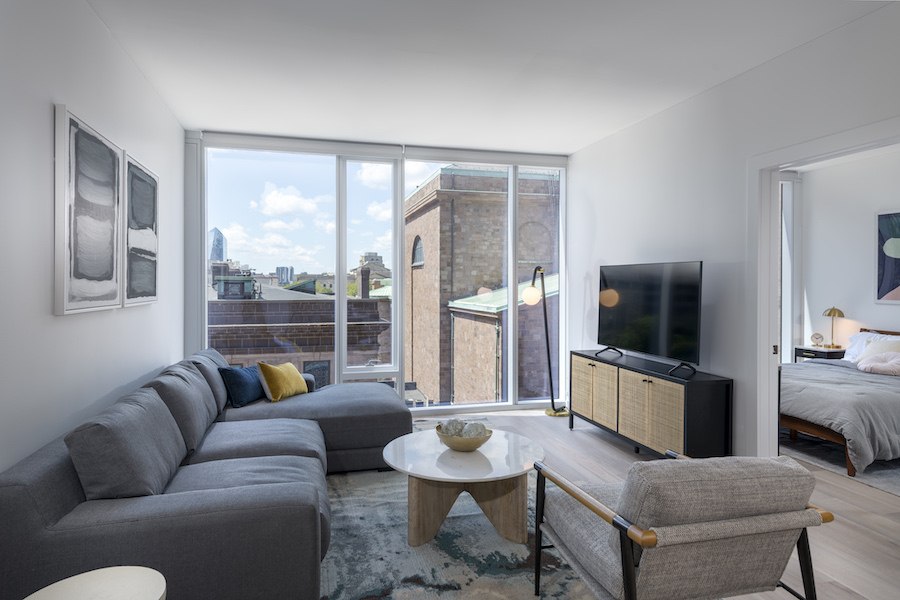 The apartments themselves are also very nicely outfitted. Most of the studios have an L-shaped floor plan that allows the sleeping area to function as a space apart from the main living area and kitchen. 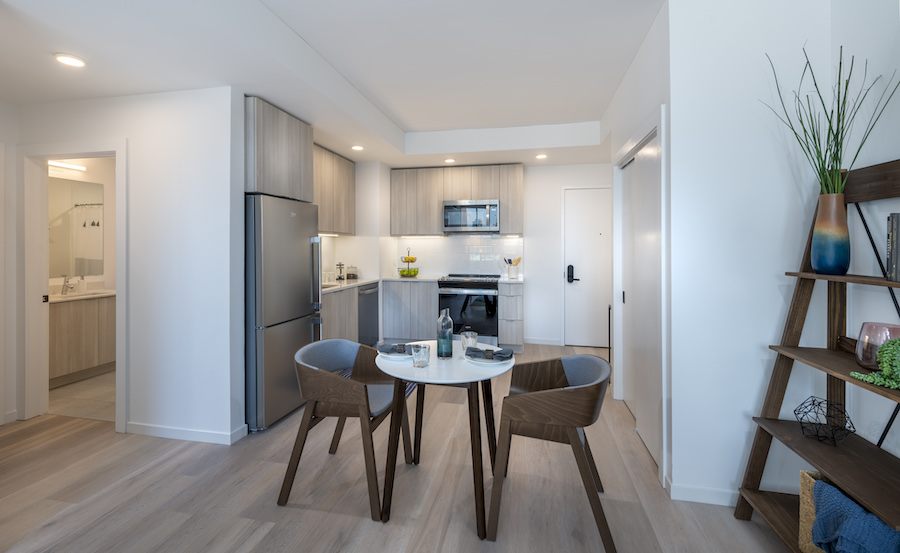 All of the apartments have open main rooms that combine the living, dining and cooking spaces. They also have nine-foot-high ceilings, kitchens with quartz countertops and stainless-steel appliances, smart entry systems and full-size in-unit washers and dryers. The building also offers ’round-the-clock concierge service and an Amazon package hub. 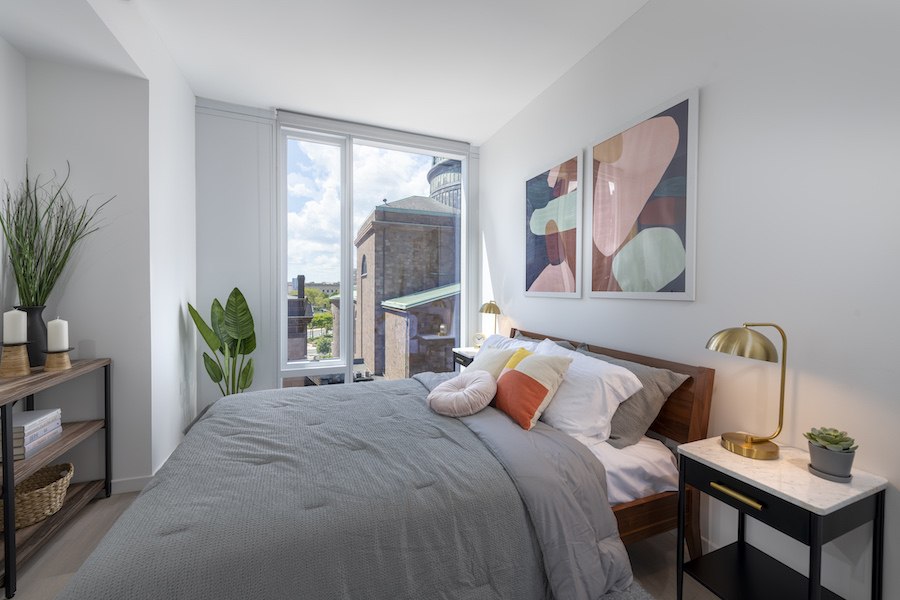 As part of the project, the company is also landscaping a private prayer garden for the cathedral’s priests that will be locked, gated and accessible from both the outside and within the cathedral.

EQT Exeter sees Cathedral Square as fitting a missing piece into the Parkway jigsaw puzzle. “The Mormon Church did a great job with the north side of Vine Street,” says Parente, “and this really felt like a critical piece to add more life to the lower Parkway.” Parente also notes that the building’s commercial space at the 17th and Vine intersection will bolster the activity that Victory Brewing Company, Asia on the Parkway and Federal Donuts bring to the Parkway’s lower reaches.

“We have a couple of really exciting retail tenants interested in our space,” he says.

EQT Exeter expects the amenity floor to be finished in early December. The co-working lounge is already ready for use.

One Cathedral Square by the Numbers

Number of parking spaces: 18, in an underground garage

Pet policy: Pets welcome, up to two per unit, with a non-refundable fee of $350 and $50 rent per month per pet. Breed restrictions apply.