The farm is long gone from this historic classic, but the one across the street has been permanently preserved to give you a taste of the past on the outside as well. 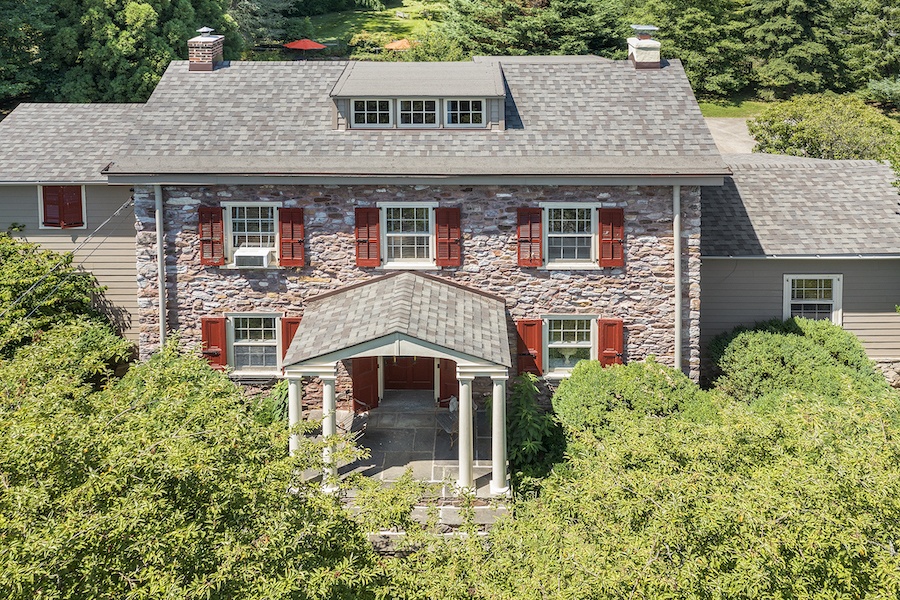 The side wings came later, and the front portico is a very recent addition. Otherwise, this stone farmhouse at 2368 Hickory Rd., Plymouth Meeting, PA 19462 looks much the way it did when John Michael Berkheimer had it built to house three of his daughters in the early 19th century. | Photos: Shaun May Photography via BHHS Fox & Roach Realtors

You don’t mess around with a classic if you can help it. And so it is that the owners of the Berkheimer House, the simple early-19th-century farmhouse in Plymouth Meeting you see above, haven’t messed around with this house much at all — at least not on the inside.

They have, however, made some improvements to the outside of this Plymouth Meeting stone farmhouse for sale that have made it a pleasant place to relax and enjoy its one-acre grounds.

That plot is a far cry from the 20 or so acres John Michael Berkheimer purchased in 1804, when this part of Plymouth Township was known as “Hickorytown,” the site of one of many iron forges built to take advantage of the area’s abundant limestone deposits.

The ”town” got dropped from the name of Hickorytown Road, but despite the presence of such development magnets as the Pennsylvania Turnpike and its Northeast Extension nearby, the area along Hickory Road appears to have resisted development pressure for some time: that 20-acre plot didn’t get subdivided until the 1980s. 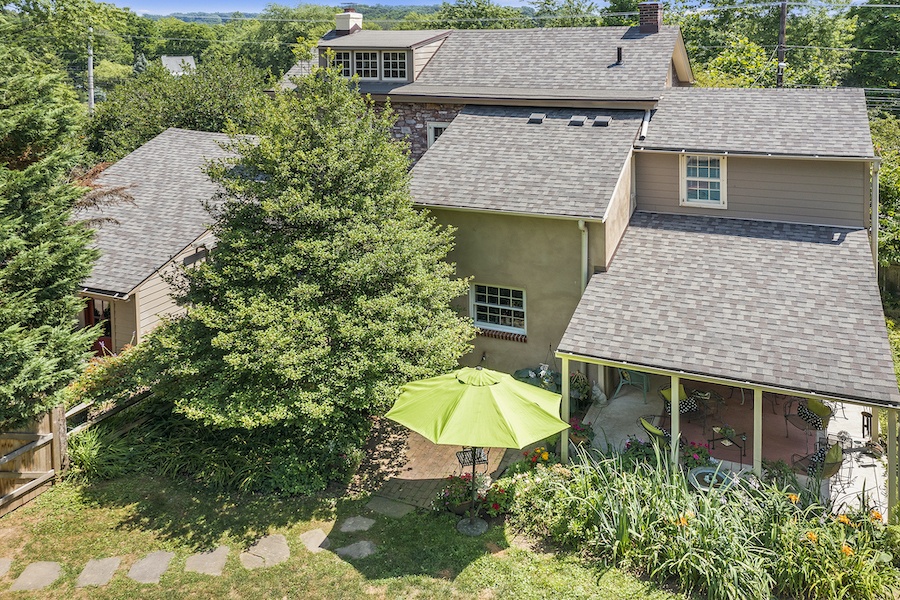 What remains of it is that one acre and this house, which listing agent Scott Laughlin of BHHS Fox & Roach Realtors estimates was built sometime around 1830. The story is that Berkheimer built it to house his three spinster daughters, part of a brood of seven children (four daughters, three sons) born between 1804 and 1819. (County records place its date of construction as 1850, but by then, those daughters would have all been in their 30s.)

As you can see from the photos above, this wasn’t a grand residence to begin with. Additions over the years, however, have made it a good bit less compact, and a few key updates have kept it in step with modern times.

One of the few major changes this house’s owners made was to add a large portico in front to protect its original Dutch door and the shutters that frame it. 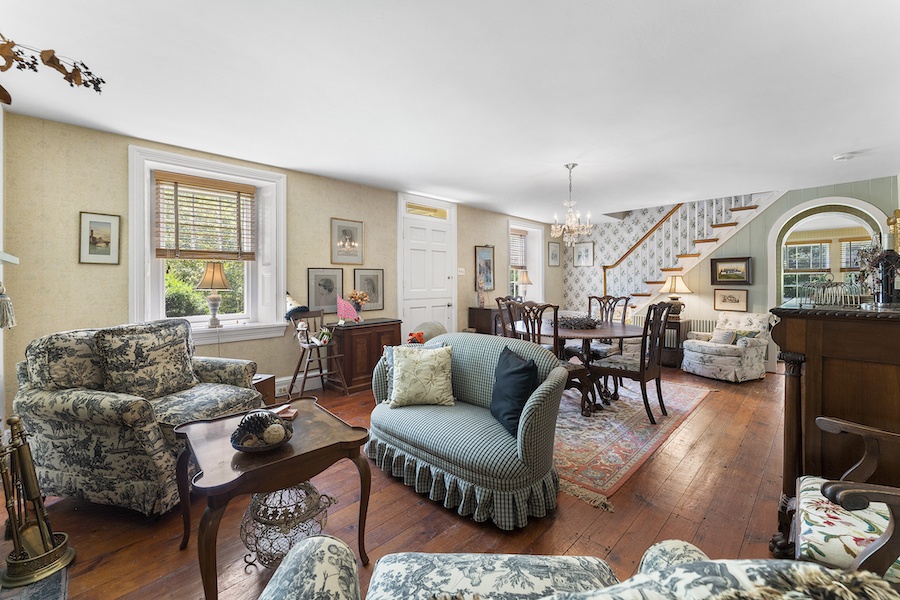 The room on the other side of that Dutch door, the original parlor and now a dining and sitting room, looks much as it did when Berkheimer built it. The original wide-plank hardwood floors remain, as does a full-height cabinet next to its fireplace. 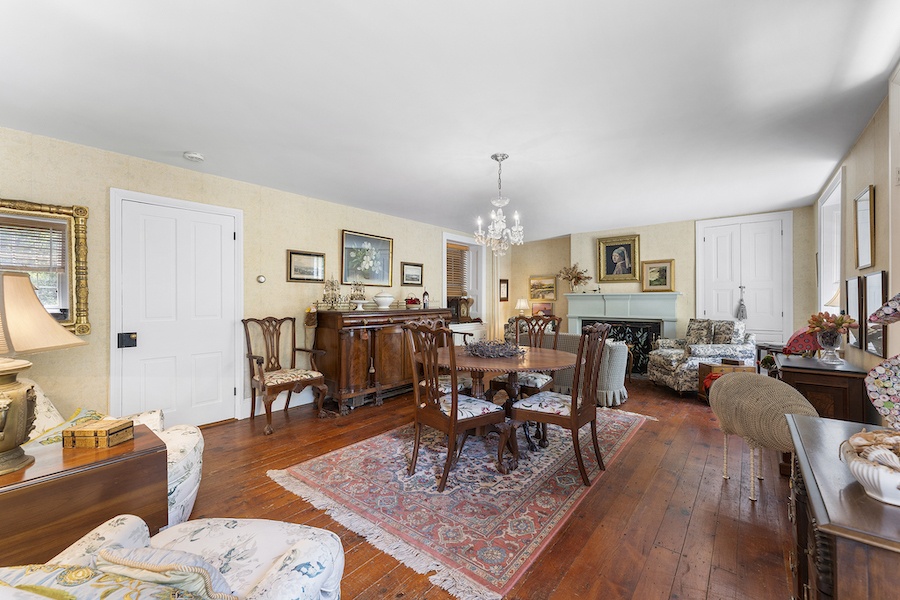 The door that once led to the back 20 and now connects to the kitchen has also been sealed to provide shelving for the kitchen. The original house’s thick stone walls made this possible. You could return it to its original function if you so desire. 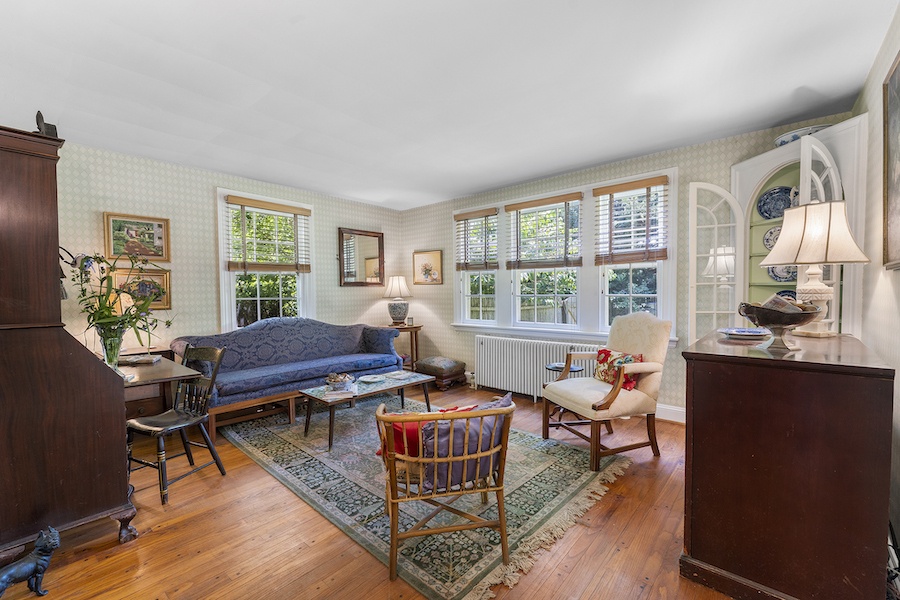 An archway under the staircase leads to a bright and sunny den, which Laughlin speculates might have been the original dining room. If so, it performed that function later in this house’s life, for this room and the primary bedroom above it are part of an addition that got tacked on years later. 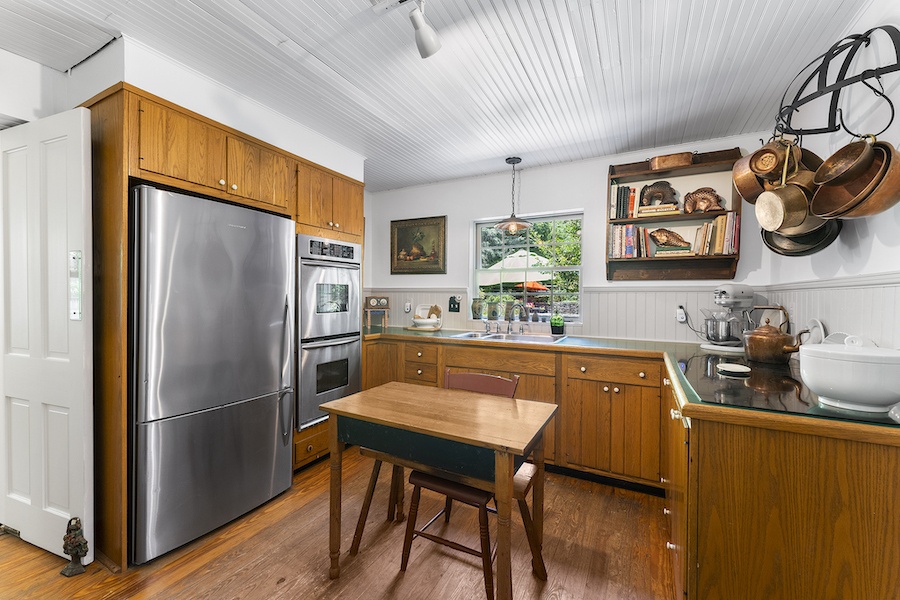 As did the rear ell that now houses the kitchen.  It too has not been messed around with much. It does have new or recently installed stainless-steel appliances and a smooth-top cooktop, though. Because the door to the living/dining room now opens to reveal pantry shelves, you will have to carry your dinner to the dining room through the den. But there’s also room for a small dining table in the kitchen. 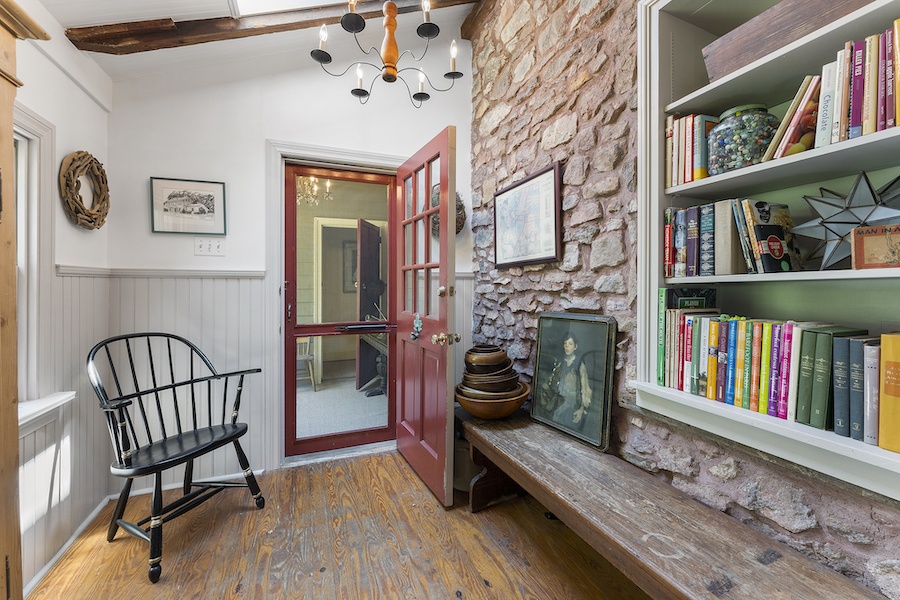 Beyond the kitchen, a mudroom has the house’s original rear wall for an accent and a skylight for natural light. What was once a window has become built-in bookshelves. 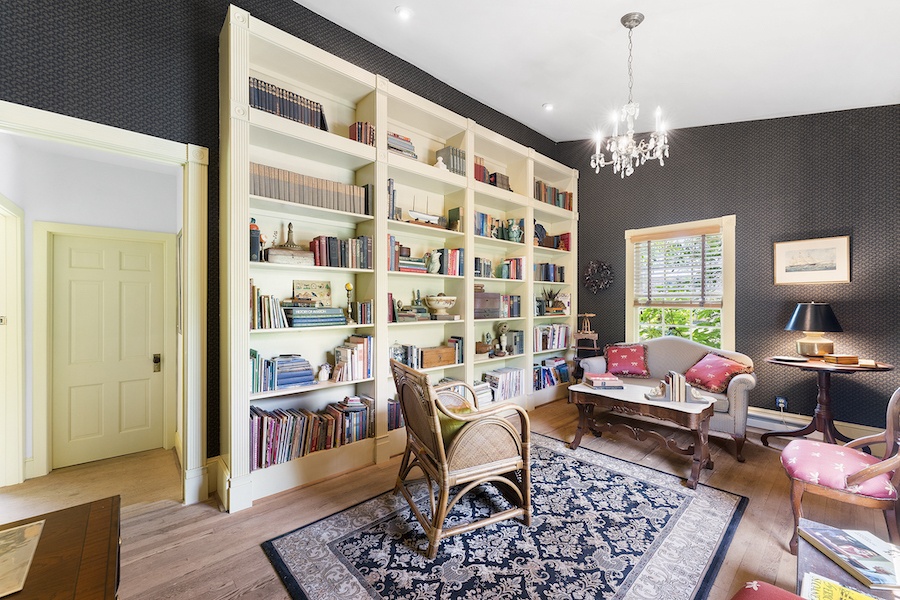 Across a small covered porch from the mudroom is this large study that’s completely separate from the rest of the house. It’s attached to the back of the one-car garage that got added to the house’s other side. Because of its privacy, it makes a great work-from-home space. 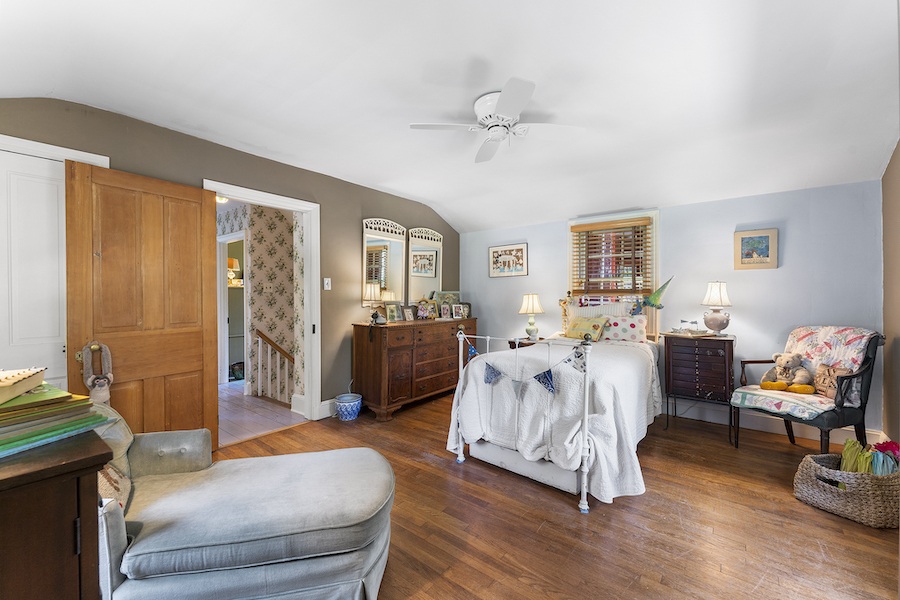 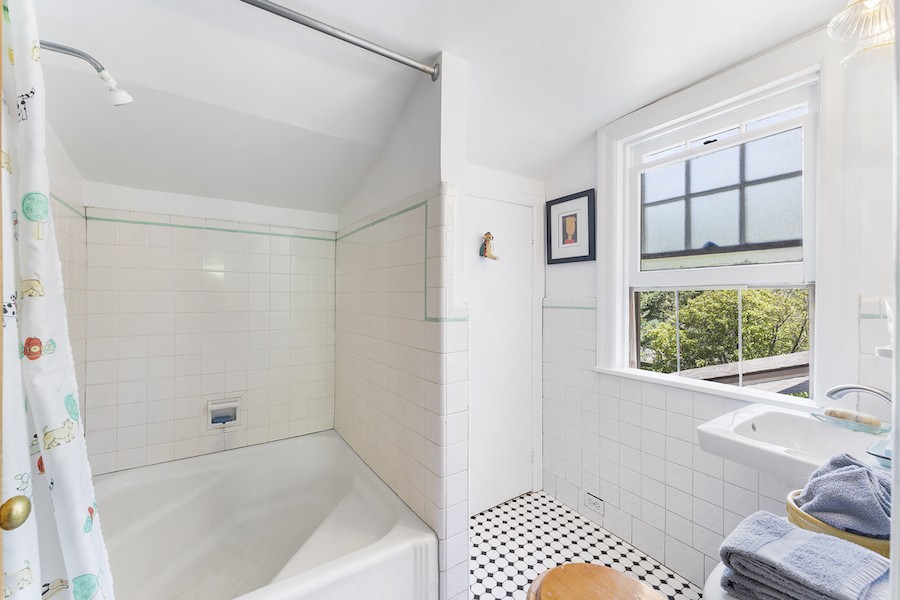 All three second-floor bedrooms share this hall bath. A half bath that had been on this floor got converted to a laundry room by the current owners. 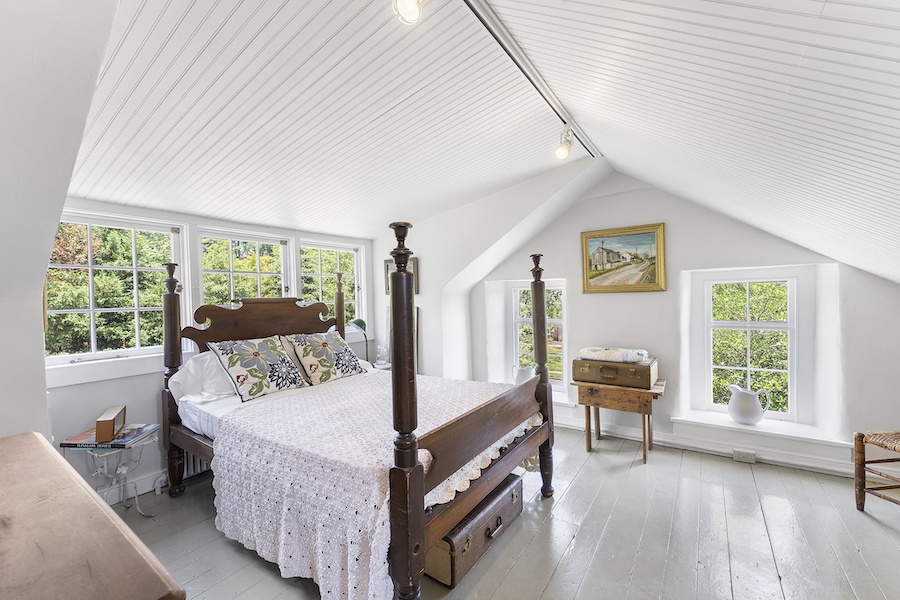 The third-floor attic got turned into a fourth bedroom. Its two dormer windows offer great views of the backyard in one direction and the farm across the road in the other. (Yes, there is still a farm here. More about that in a bit.) 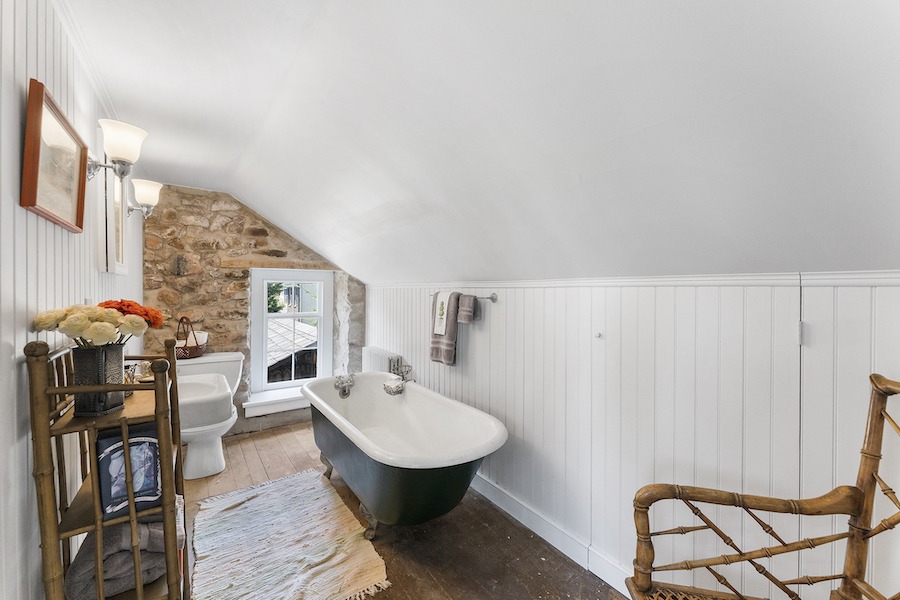 A second full bath is tucked under the eaves at the other end of the floor. It has an original clawfoot tub. 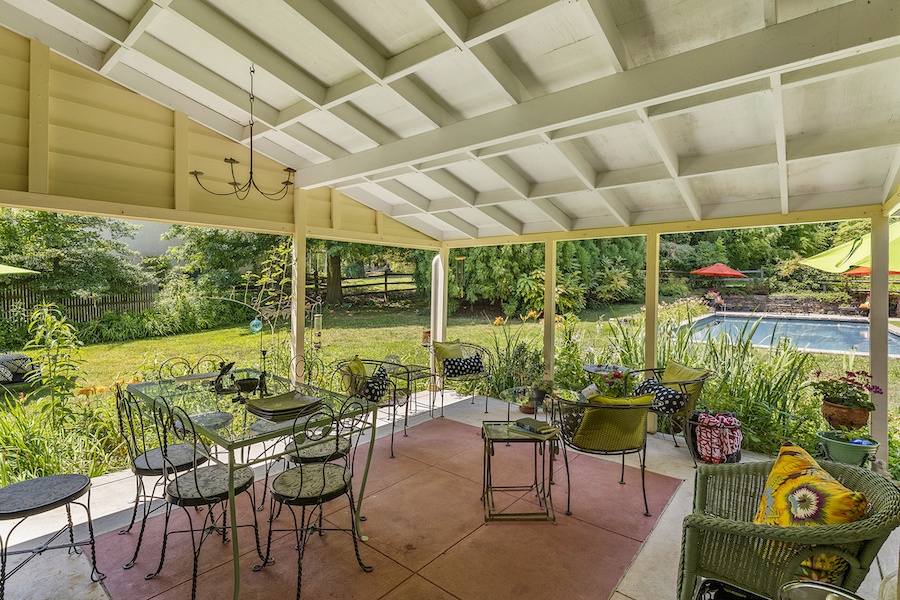 The biggest alteration the current owners made to the house is in back, beyond the covered rear patio. 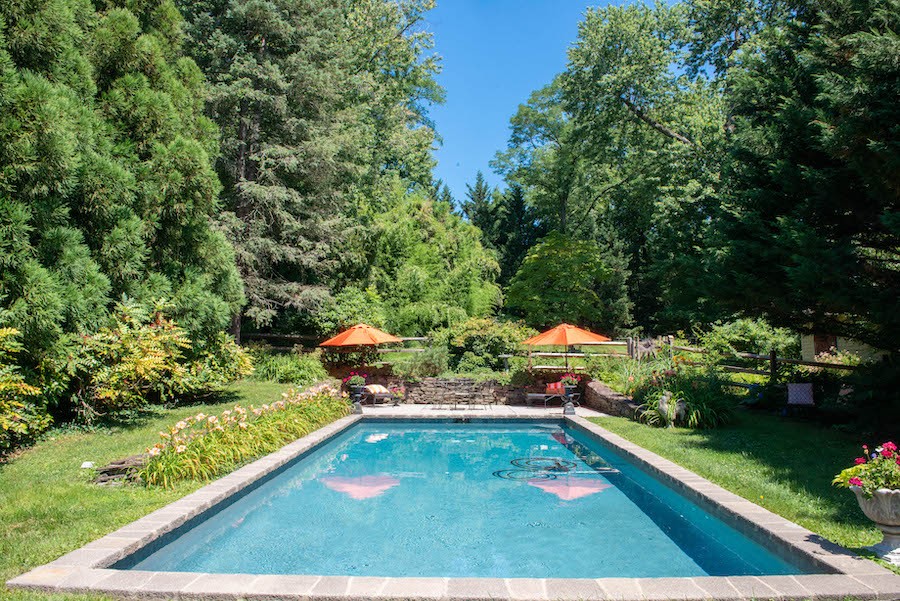 They added this fenced-in swimming pool in 2000, surrounding it with landscaping that makes it feel secluded. The rest of the backyard is covered in shrubs, trees and other greenery. 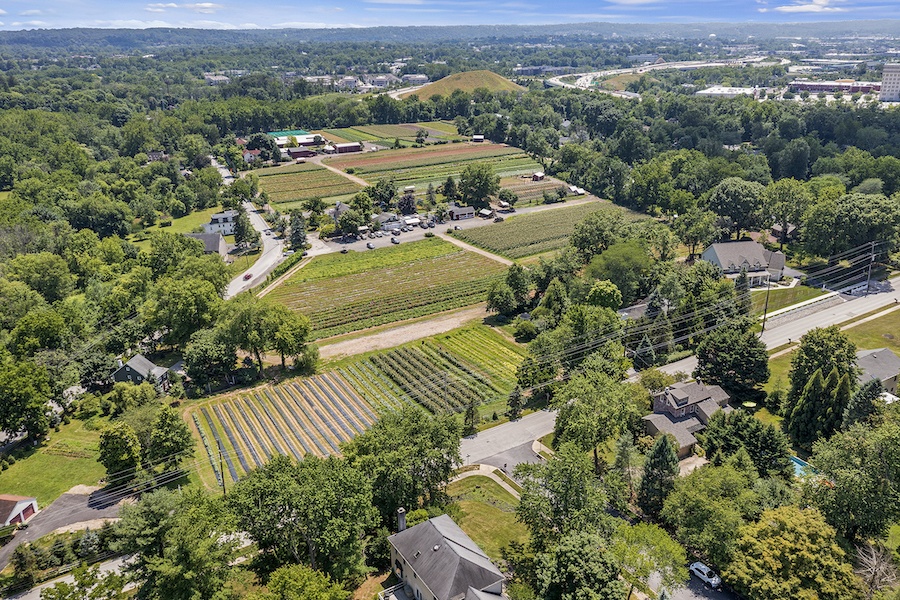 And that, in turn, brings us back to what’s across the road. Thanks to a conservation easement, the 40-acre Maple Hill Farm on the other side of Hickory Road will remain open space forever, thus giving you the opportunity to feel like you haven’t left the 19th century, appearances to the contrary around you notwithstanding. You can pick your own zinnias as well as buy seasonal fruits and vegetables from this farm, which extends almost all the way to the Turnpike/Northeast Extension/Blue Route junction.

And as that sits right next to the Turnpike’s Norristown interchange at Plymouth Meeting, that also means you have Plymouth Meeting Mall for a neighbor not far away. Fortunately, you also have even more greenery close at hand in the opposite direction, as this Plymouth Meeting stone farmhouse for sale also sits close to Harriet Wetherill Park.

Early American charm in a modern American suburb — it’s not as much of an oxymoron as it might seem at first.

Updated Aug. 9th, 8:50 a.m., to correct details in the description of the house.