A midcentury renovation turned these two back-to-back trinities into one singular sensation. 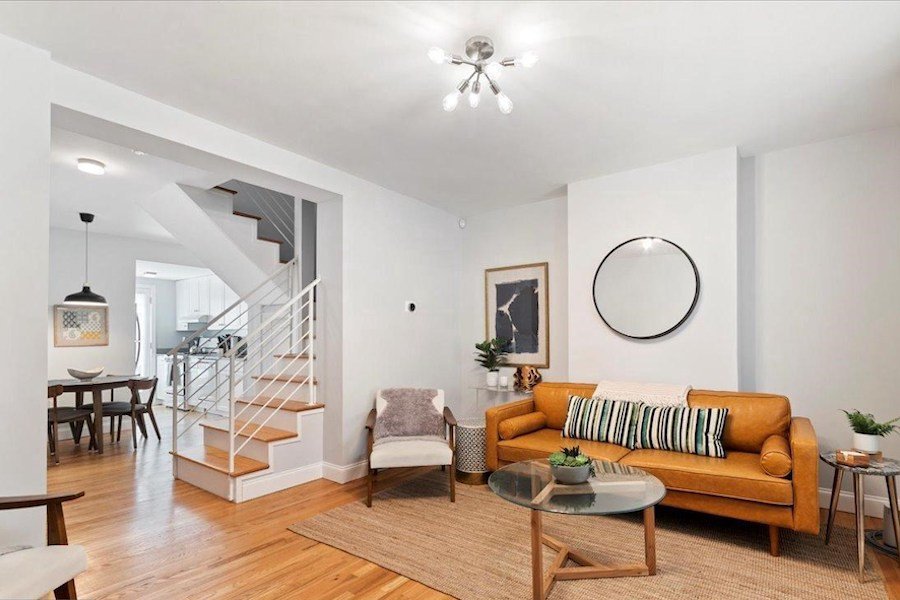 This week’s featured trinity reminds us that we should never judge a book by its cover.

For if the only thing we saw about this Hawthorne double trinity house for sale were its facade: 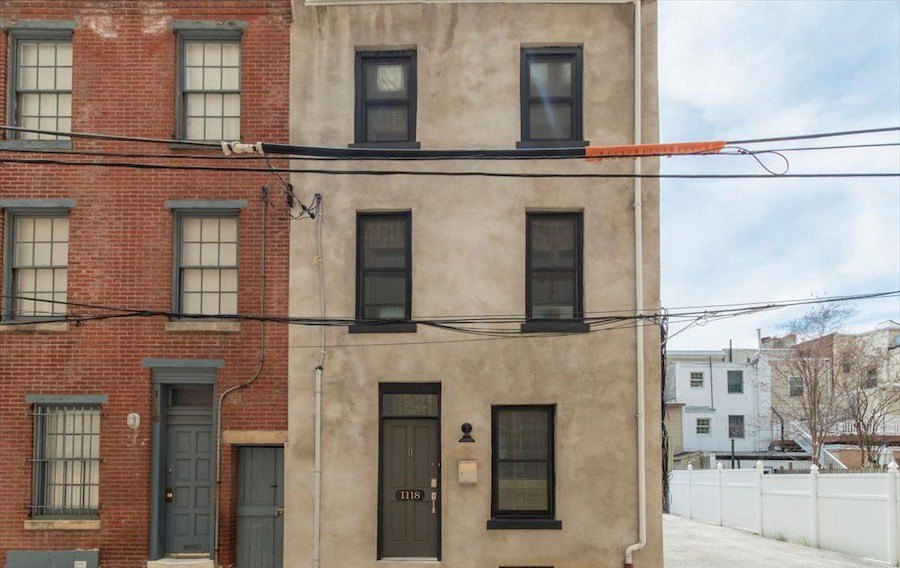 we would probably pass this house up.

And that would be a grave mistake. For as you can see from the photo at the top, behind that rather drab gray stucco facade is a real looker of a midcentury modern house.

Living in Hawthorne: A Neighborhood Guide

“Midcentury modern” because the renovation that turned these two back-to-back trinities into one singular sensation of a house occurred in 1960.

And clearly, the current owner of this double trinity pays homage to that renovation with the furniture they chose for its living room.

The renovation also replaced two of those trademark spiral box stairways with one ordinary switchback staircase, which you and whoever helps you move will no doubt appreciate when the time comes to haul your mattress(es) upstairs. 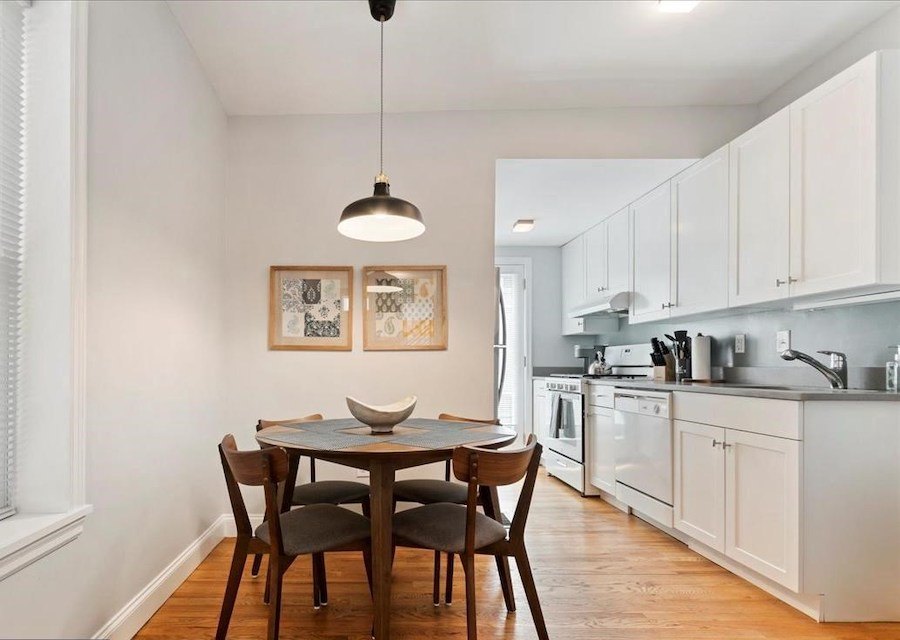 That staircase also separates the living area from the spaces for food preparation and consumption. 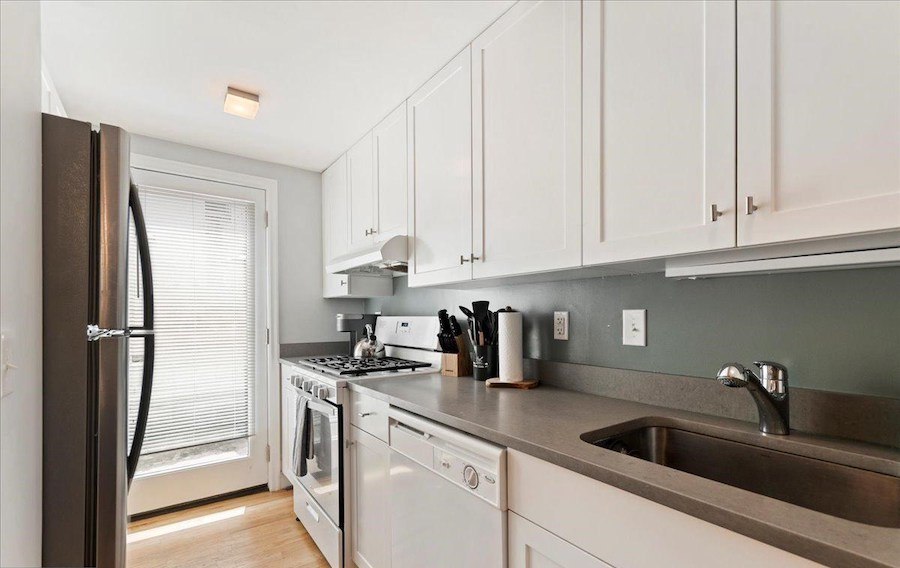 Those two spaces are one thanks to the extension of the galley kitchen into the dining room.

The kitchen and bathrooms show that this house has kept up with the times since 1960. 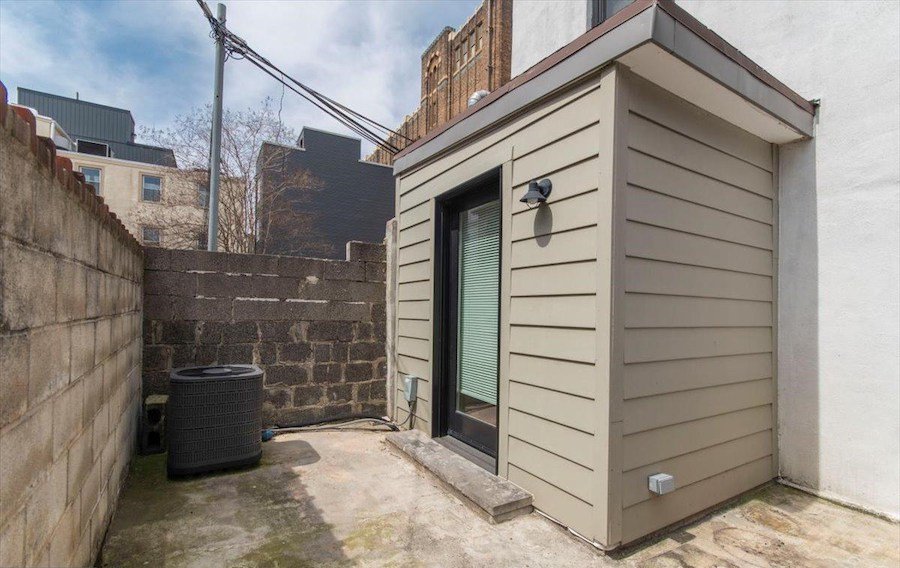 And at the other end, the galley kitchen extends a little bit into the house’s rear patio. 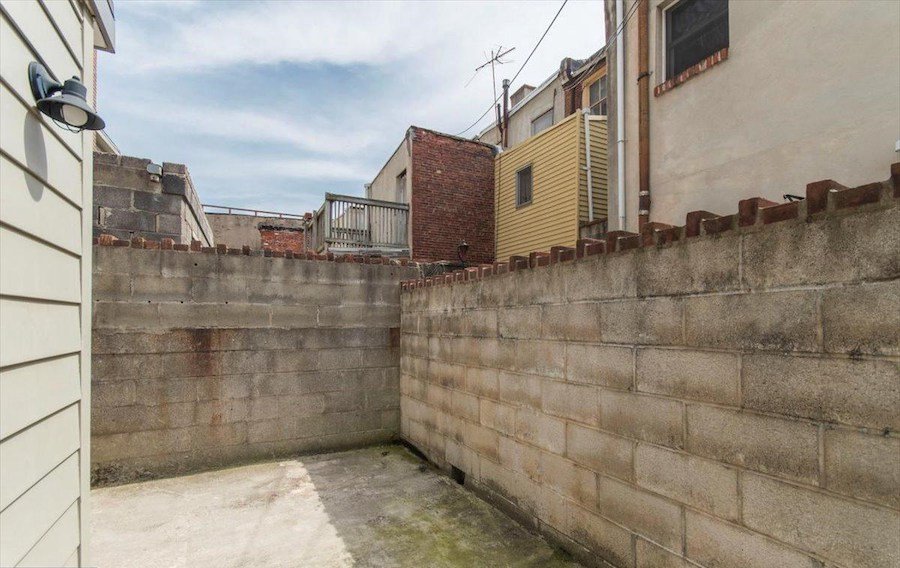 Pro tip: This patio has the potential to help the city cut down on stormwater pollution through the installation of things like permeable pavers and planter beds. And the city will pick up part of the tab for installing them through the Water Department’s Raincheck program. 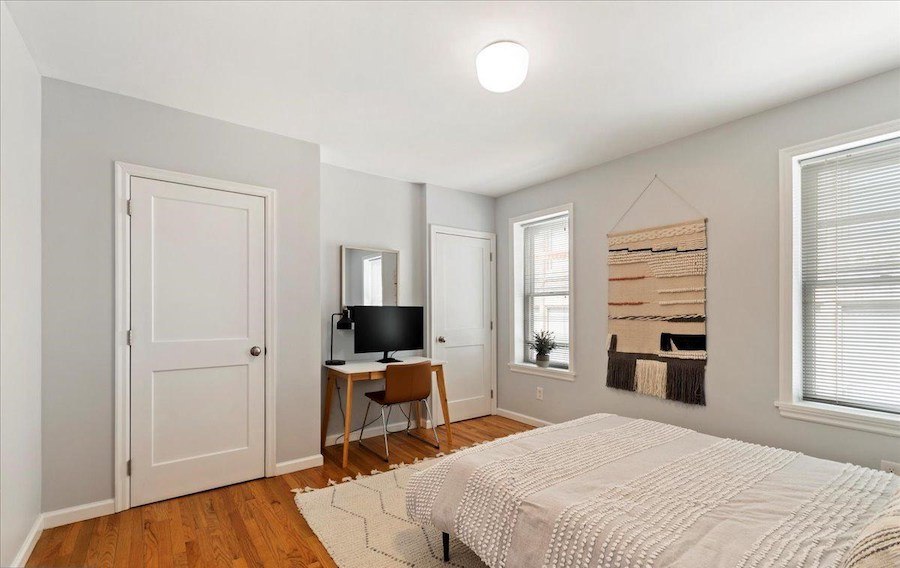 Each of the two upper floors has a bedroom on one side of the staircase and a bathroom on the other. 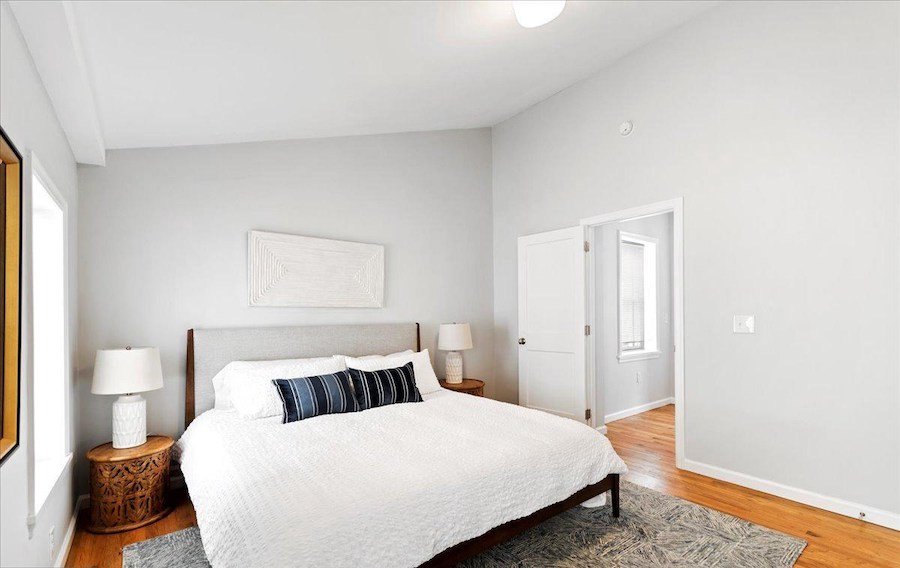 Each bedroom has two closets and enough space to accommodate a work desk as well as a bed. Of course, you could choose to outfit one bedroom as a home office and deduct it from your taxes if, like many these days, you’ve made working from home a permanent gig. 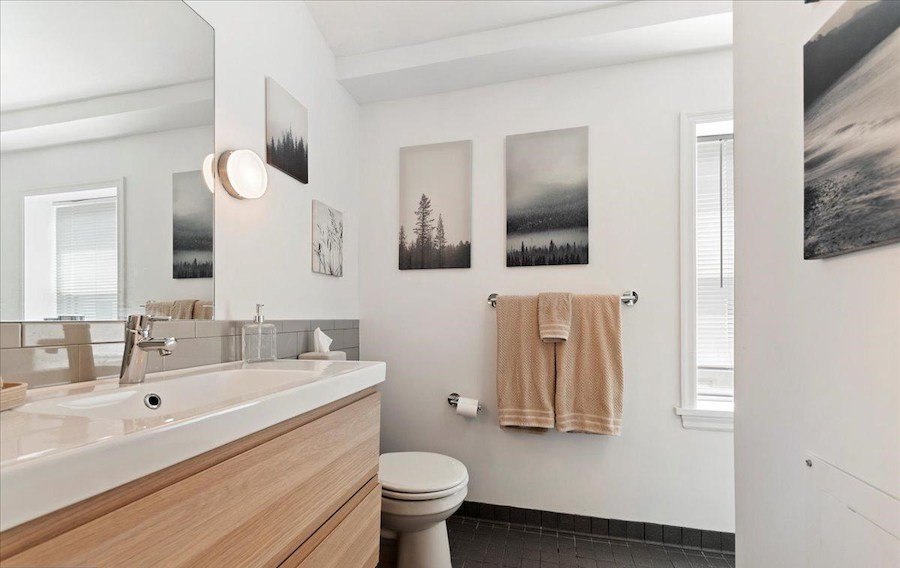 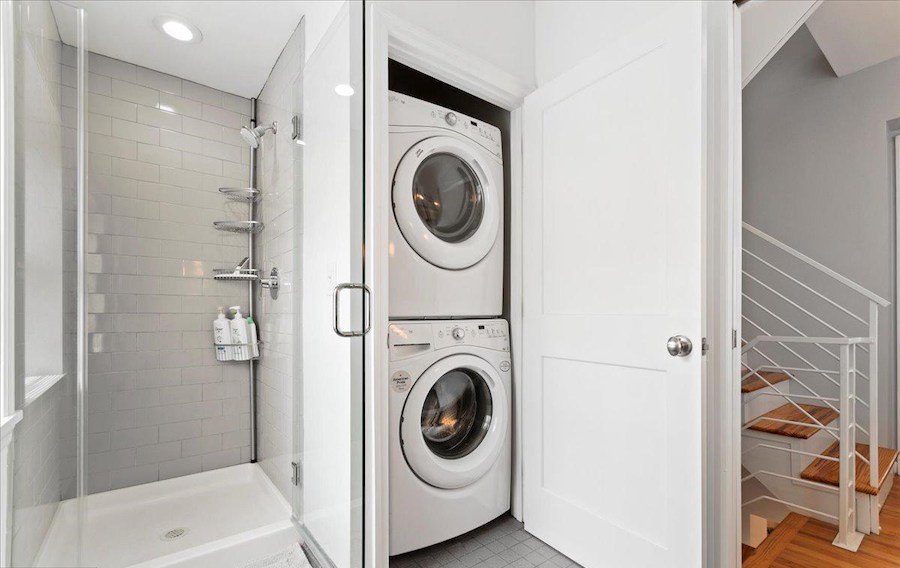 Shower and laundry in second-floor bathroom

The second-floor bathroom has a glass-framed shower and the laundry facilities. 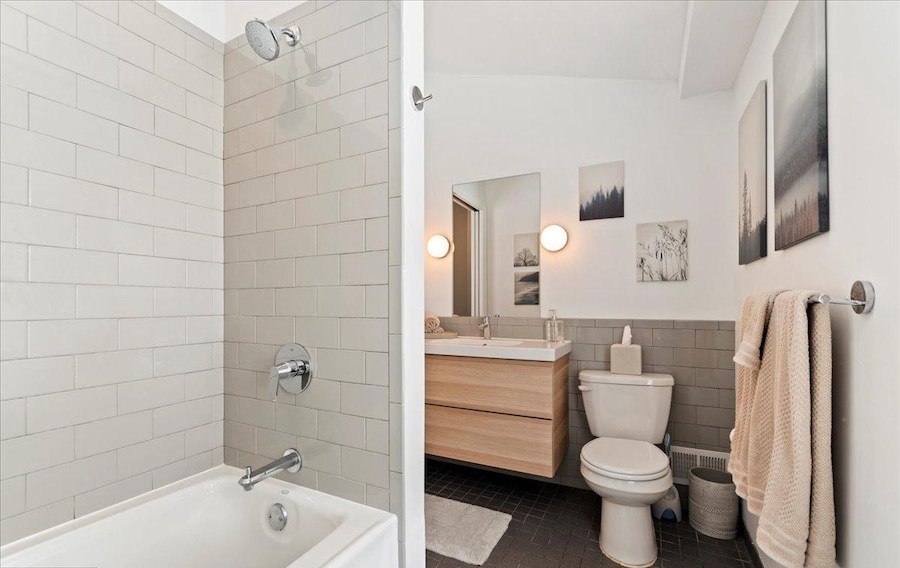 The third-floor one has a tub/shower combo lined with subway tile.

Pretty nicely done, no? And it comes with an even nicer amenity: its location.

So much lies within walking distance of this Hawthorne double trinity house for sale. One block from here, Hawthorne Park offers activities and programming throughout the year. A second park sits behind the High School for Creative and Performing Arts a block and a half to the west, and the Hawthorne Recreation Center lies a block to the south. To the east lie the Italian Market, Palumbo Playground and the two supermarkets at 1oth and South streets.

Another supermarket and a Target can be found at Lincoln Square at Broad Street and Washington Avenue, four blocks away, and about two years from now, a Giant supermarket will join these in the new 1001 South Broad development.

In other words, not only is this Hawthorne double trinity house for sale attractive and accommodating, it’s also ideally set up for car-free living.

OTHER STUFF: Even though this house is ideally situated for car-free living, parking for one car is available.