South Broad Megaproject Gets a Makeover

Post Brothers and Tower Investments got to talking about getting 1001 South Broad done. They went in together and came out with an even bigger, much improved project. 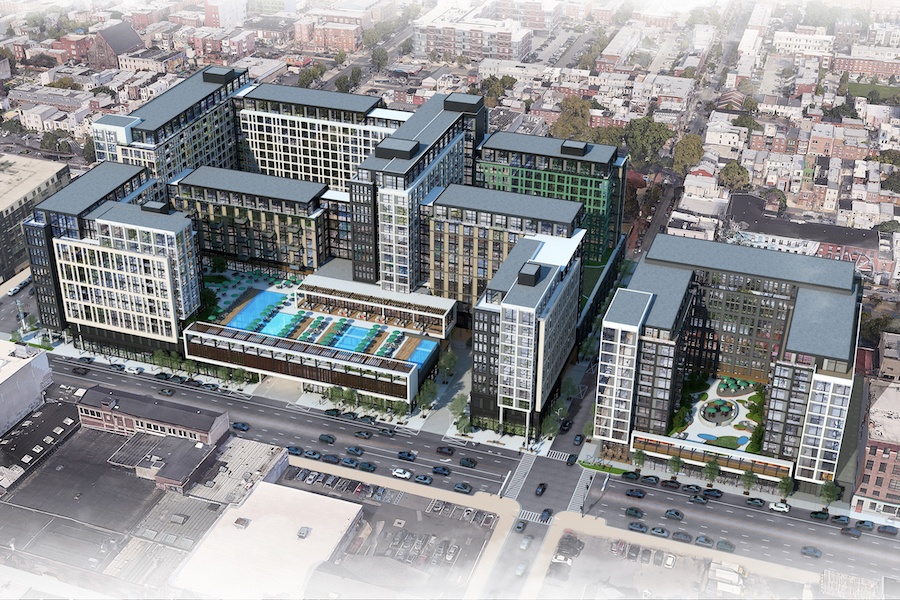 An architect’s rendering of what the finished Broad and Washington apartment/retail development will look like. | Renderings: BKV Architects via Post Brothers

Sometime around two years from now, the first phase of a new mixed-use apartment/retail complex will open at the northeast corner of Broad Street and Washington Avenue, where four Greater Center City neighborhoods meet.

That, in turn, will bring to an end a long, involved journey that began in 2014. And much like another long, complicated journey involving developer Bart Blatstein, the finished product will be a great improvement on the original.

That previous project, you may recall, was The Piazza, in which the Northern Liberties Neighbors Association played the role of reshaper. This time, that role is being played by Post Brothers, the company that now owns The Piazza and is going in as a partner with Blatstein on this project.

After Post Brothers and Blatstein’s Tower Investments joined forces, what was once a 32-story plinth atop a four-story parking podium topped with shops will now blend in much better with its surroundings. The project will still be huge — 1.8 million square feet, covering five acres of land, with 1,486 apartments and 66,000 square feet of retail space, 40,000 of them devoted to a Giant supermarket — but it won’t look like a monolith rising over Hawthorne.

The revamped project, which will be built in three phases between now and 2026, will cover a larger territory than the original proposal, which included only the block bounded by 13th, Broad and Carpenter streets and Washington Avenue. The revised project will also include what is now a parking lot at the northeast corner of 13th Street and Washington Avenue.

When finished, the project will consist of three buildings with 10 distinct wings ranging in height from 10 to 15 stories. The two buildings in the 1300 block will be joined together to function as one. The first building is scheduled to be completed in 2024.

The parking has been moved from the podium to an underground garage, and an amenity terrace replaces the rooftop shopping village. (Pestronk admits that it took a while for him to persuade Blatstein of the wisdom of moving the shopping down to street level.) 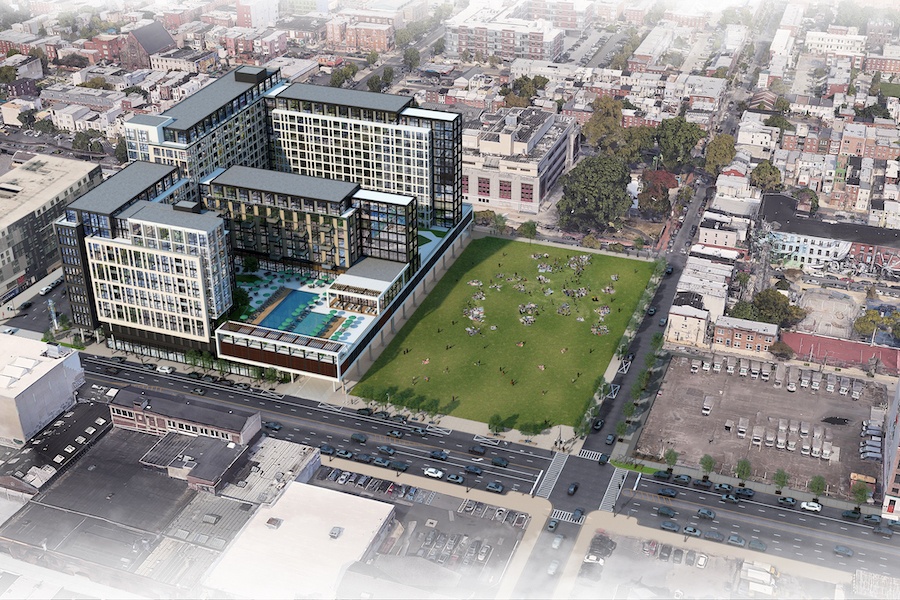 The path to this partnership between Tower Investments and Post Brothers began close to three years ago, when the Pestronks negotiated with Blatstein to acquire the land they needed to build the Piazza Terminal project. Blatstein, who had built the original Piazza, had sold that complex to Jared Kushner’s company in 2013, and Kushner Companies in turn sold it to Post Brothers in 2018. After Post Brothers refreshed and reconfigured the Piazza the next year, they then turned their sights to expanding it, and that put them in touch with Blatstein.

Meanwhile, Tower’s Broad and Washington proposal seemed to be going nowhere. Neighbors objected to the first and second versions of the project, and a legal dispute over the sale of its lot also stalled progress for a while. After Blatstein sold the land for the Piazza Terminal project to the Pestronks, they got to talking about how to get something built at 1001 South Broad at long last.

Those discussions led to Post Brothers buying a 50 percent stake in the site from Tower and taking the lead on the actual construction of the building, using the new design from BKV. The partnership broke ground on the project in December.

Rumors had circulated during the long gestation period that environmental issues on the site kept the parking garage from going underground. Pestronk, however, said that wasn’t the case. “I would say that this site is actually not bad at all compared to other ones we’ve done. It’s certainly cleaner than most of the sites in Northern Liberties were, because Northern Liberties had such a manufacturing history. There was a little bit of environmental planning to be done, but it’s a relatively clean site as urban sites go.”

In addition to breaking up the tower into a collection of mid-rises and moving the parking underground, the reworked design also amps up the amenities. The complex will have a total of 185,000 square feet of amenity space, indoors and out.

Indoor amenities include a supersized gym with dedicated space for every type of workout, his and hers recovery rooms, two lounges for entertainment, including one on a top floor, co-working space, a kids’ playroom, and a glam room.

Outdoors, residents will have access to a large pool deck with multiple pools and hot tubs, three courtyards — one of them for the kids, a dog park and a community shade garden that will have a performance space and feature art exhibitions.

“They’re on the scale of other Post projects, is probably the best way to put it,” says Pestronk.

The building will have 510 underground parking spaces, 50 of them equipped with electric-vehicle chargers. It will also have 713 bicycle parking spaces.

BKV’s design is influenced by Scandinavian and Parisian architecture but takes its cues from its immediate surroundings. “It is a continuation of the classical vernacular of the Avenue of the Arts and the industrial typology along Washington Avenue,” a Post Brothers fact sheet on the project states. The project will also be the largest project in the country to use prefabricated bearing-wall technology.

Pre-leasing of the units in Phase I will begin in the fourth quarter of 2023. All three phases are scheduled to be completed by the end of 2026.

Updated March 31st, 7:17 p.m., to clarify the nature of the partnership between Post Brothers and Tower Investments.