Built in the early years of the 20th century for a local industrialist, the grand residence locals call “The Great Gatsby House” is being offered for sale by the real estate agent who lovingly restored it. 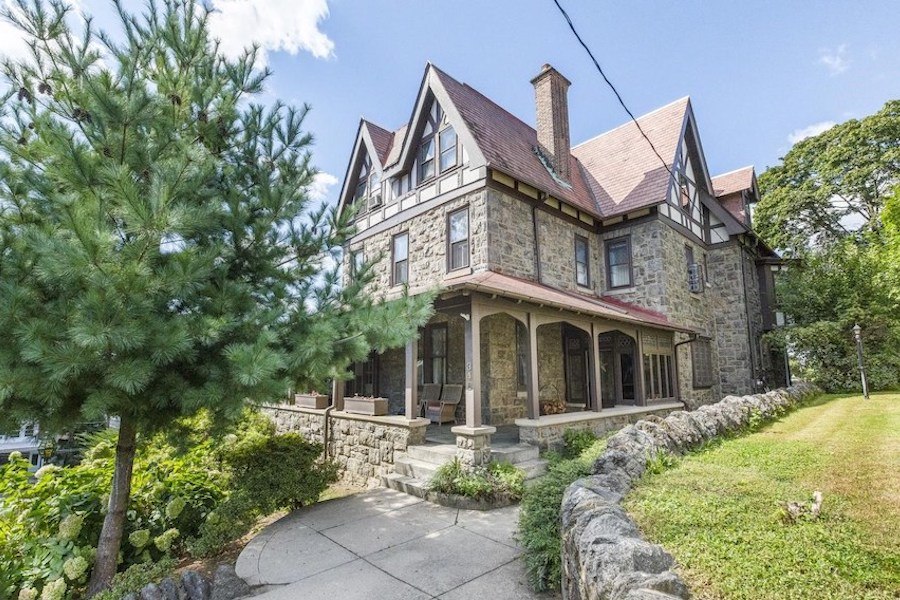 Just beyond Manayunk’s northwestern reaches, perched near the crest of one of the many steeply sloped streets that connect the riverside neighborhood to Roxborough, sits a magnificent Tudor Revival house, built in 1915 for local merchant Joseph Kenworthy, who sold wool produced in China to Manayunk’s textile mills.

This was also three years after F. Scott Fitzgerald published his famous novel, The Great Gatsby. How this house came to be associated with that book is unclear, but for years, its neighbors have called this handsome Roxborough Tudor house for sale “The Great Gatsby House.”

“Haunted house” was what BHHS Fox & Roach agent Louise Fischer called it when she first saw it in 1999. She and her husband-to-be, Tony Perez, were looking for a house they could fix up when her daughter, Lisa Santoro, called her attention to its next-door neighbor. After passing out of the hands of the Kenworthy family in 1960, it had passed through three other owners, one of whom made some renovations in the 1970s and another who had let the house gently gather dust.

Living in Manayunk: A Neighborhood Guide 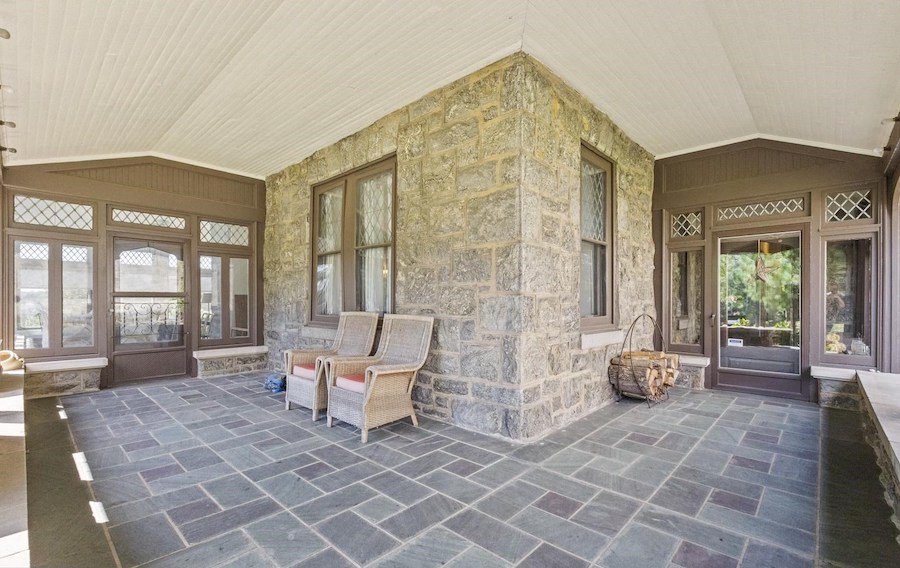 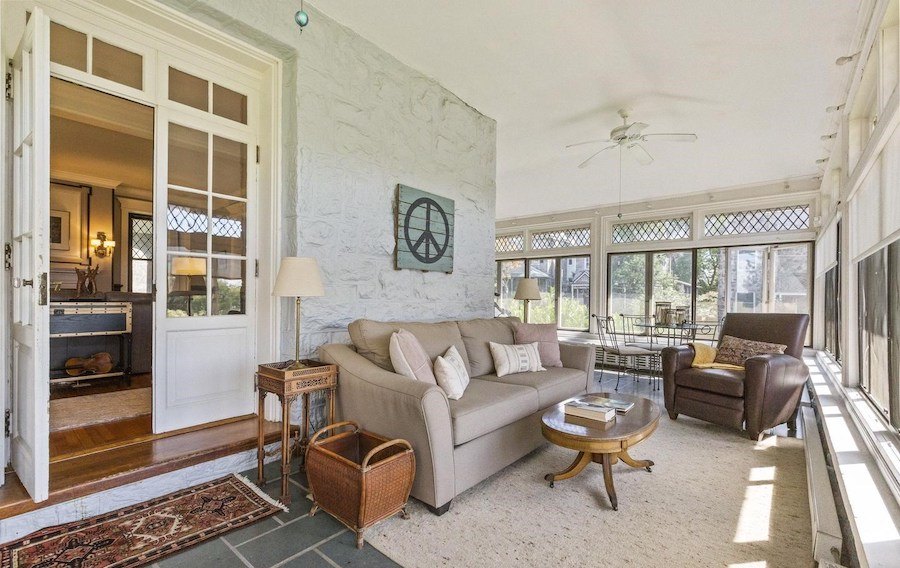 “Tony likes old houses,” Fischer said, and because of this, they bought the house and set about restoring it. 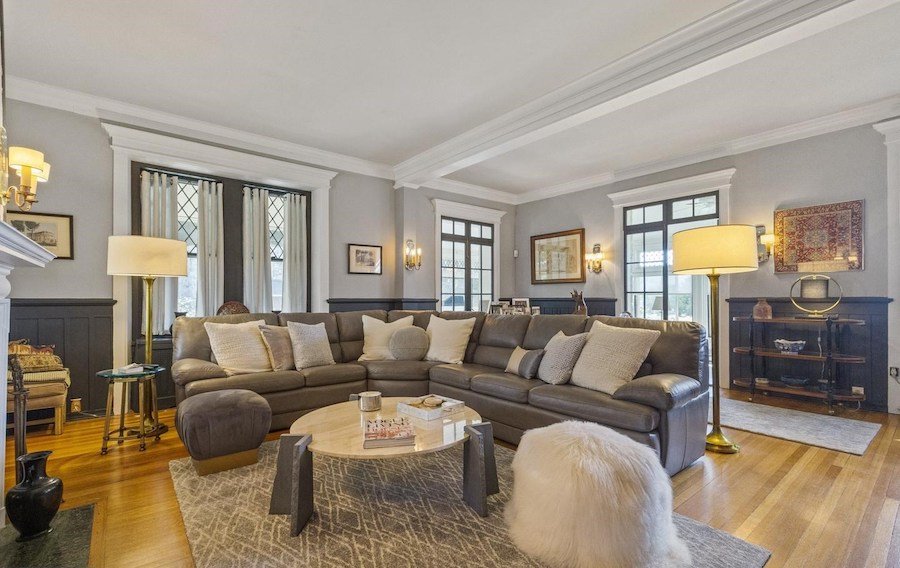 They discovered all sorts of great original fixtures and fittings and left then all in place. You will note the many leaded- and stained-glass windows, brass and silver wall sconces, and oak and pine floors as you peruse the photos that appear here. 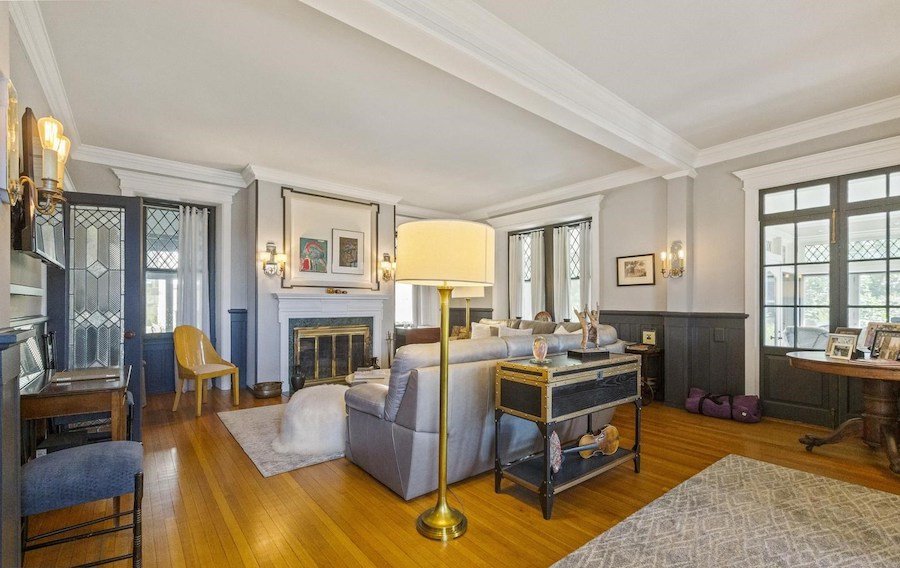 Their 1999 renovation removed the paint that had been applied to those sconces and returned them to their original appearance. 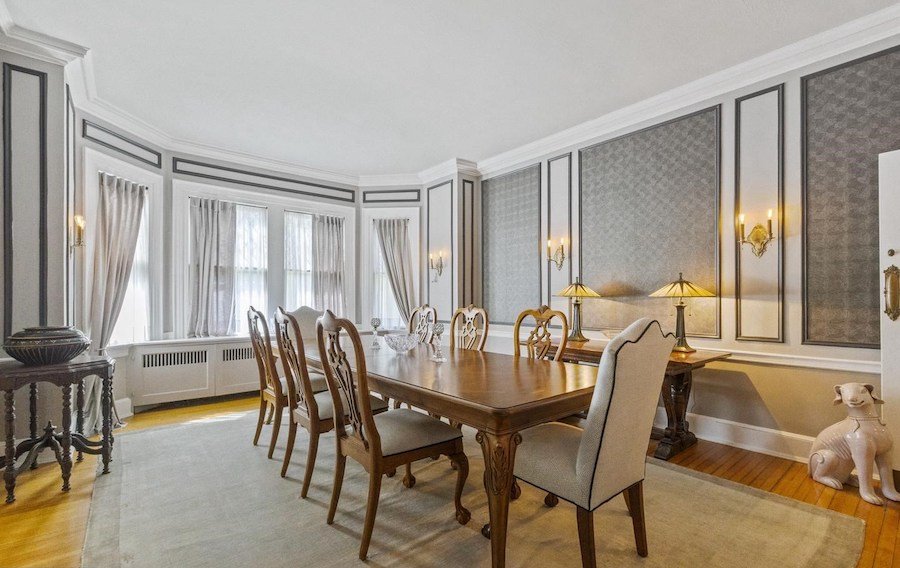 They also scraped off the glued-on shag carpeting and carpet tiles that had been laid on the main floor and restored its oak flooring. 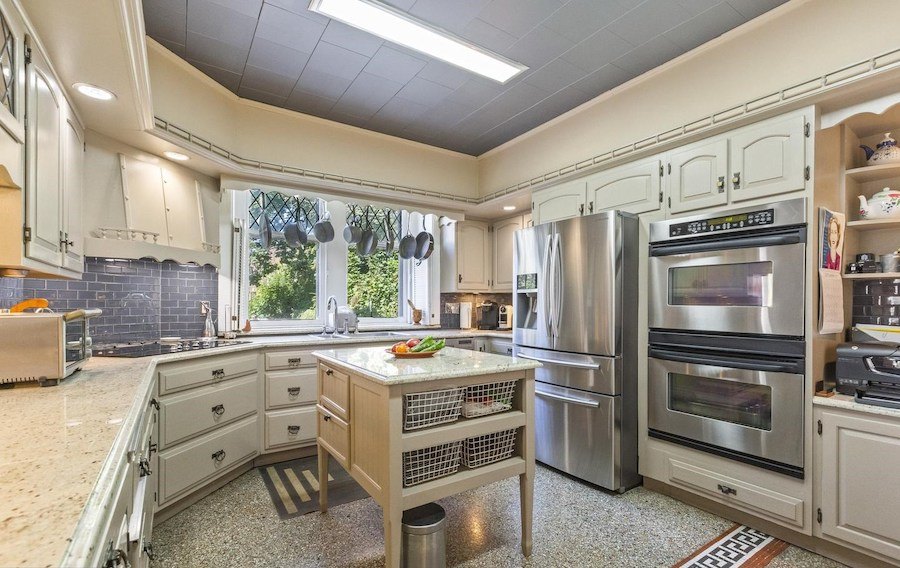 In the kitchen, butler’s pantry and breakfast room, they found that the carpeting had covered a terrazzo floor with Greek mosaic-tile accents. Perez taught himself how to grind stones for terrazzo and restored the floors. 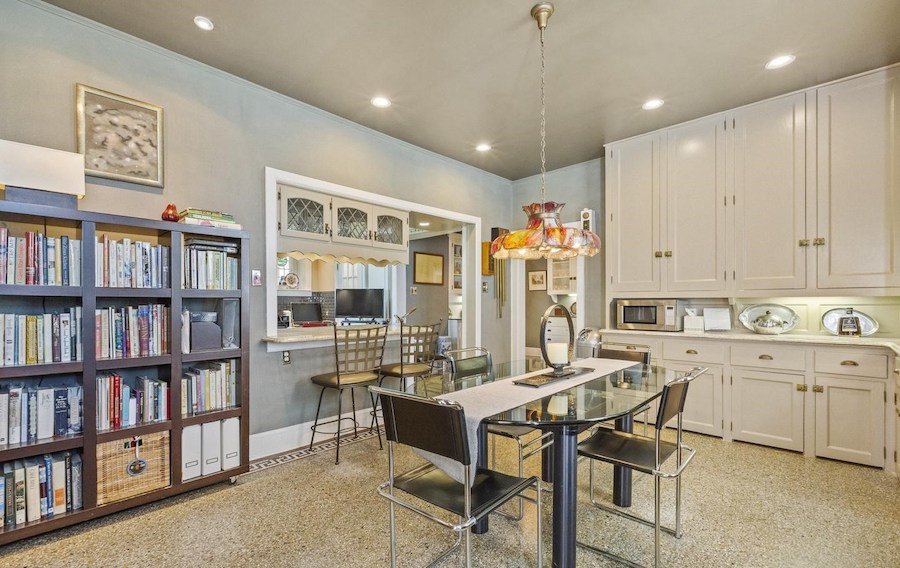 They left the cabinets that had been installed in a 1972 renovation in place and cleaned up their brass pulls. They then updated the kitchen appliances, replacing them with modern stainless-steel ones. 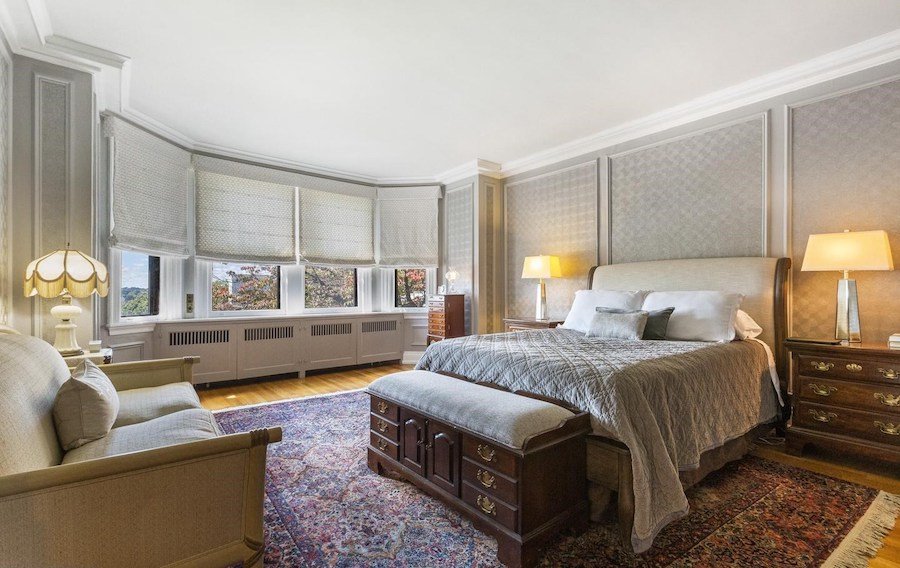 Originally, they had painted the rooms in a series of pastel colors, but since then, they have updated them with a more neutral color palette where grays dominate. The primary bedroom, for instance, had been given walls that matched or complemented the mauve tile of the primary-suite bathroom. Now it boasts walls that blend gray paint and wood trim with patterned gray wallpaper inlays. 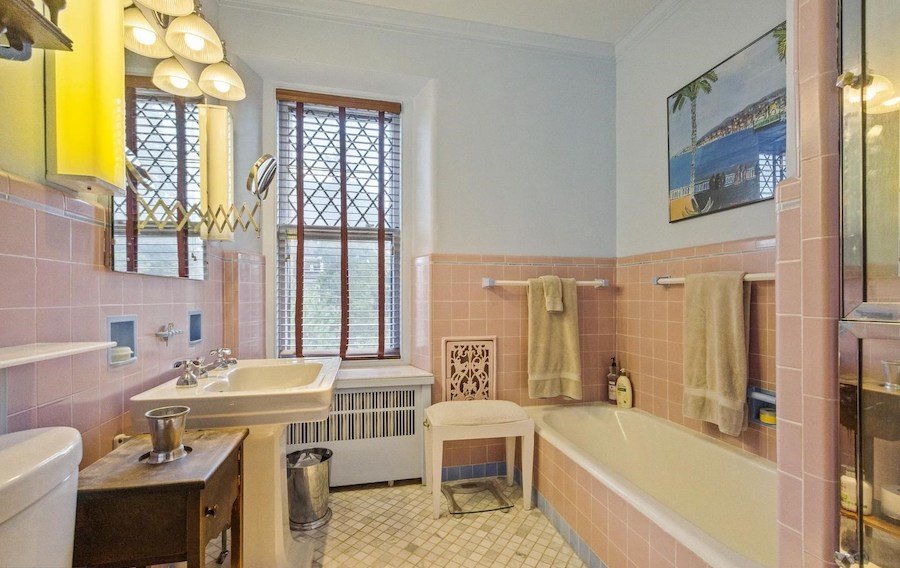 The bathrooms all retain their vintage-1940s tilework and plumbing fixtures, save for a few replica fixtures here and there and a modern vessel vanity in the first-floor powder room. Fischer and Perez did install a marble tile floor in the primary bathroom. 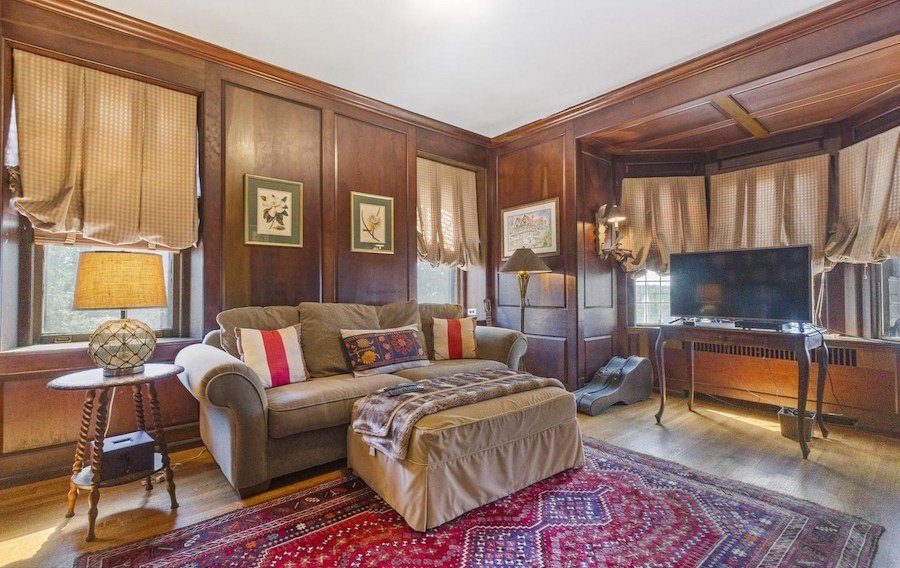 The second-floor primary suite also includes a wood-paneled den that Fischer believes was originally Kenworthy’s office. Two additional bedrooms and a bathroom are located on the third floor, and all three floors are connected by an open staircase with curved edges and a pendant lamp that hangs from the ceiling and extends down to the foyer. 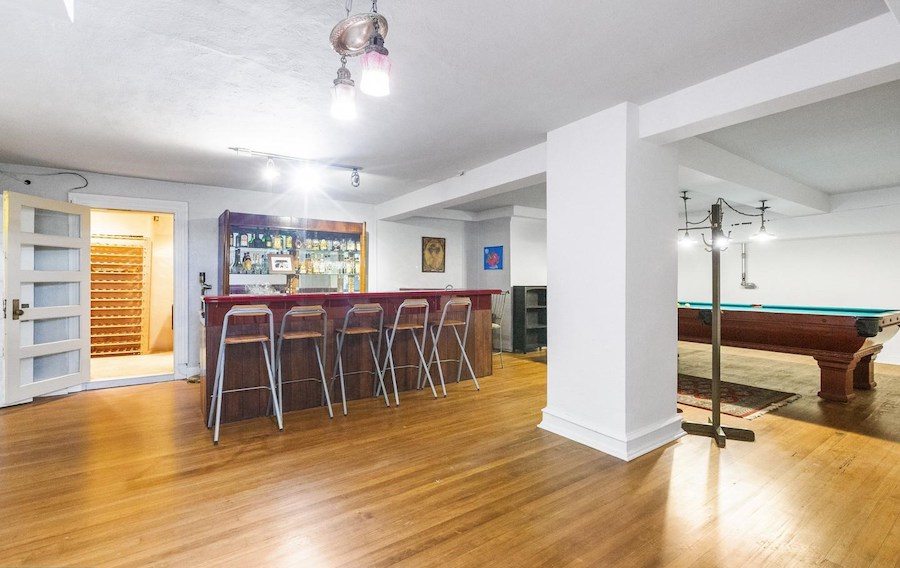 The basement contains three main spaces. One is a recreation room with a bar and a billiard table. Perez built the bar, and the vintage billiard table was made by Victor Billiards, a long-gone company that had been located at 1435 Federal Street in South Philadelphia. Next to the rec room is a wine cellar, and the basement also contains workshop space and a walk-in safe where Fischer speculated Kenworthy locked up his valuables when the family traveled on vacation. 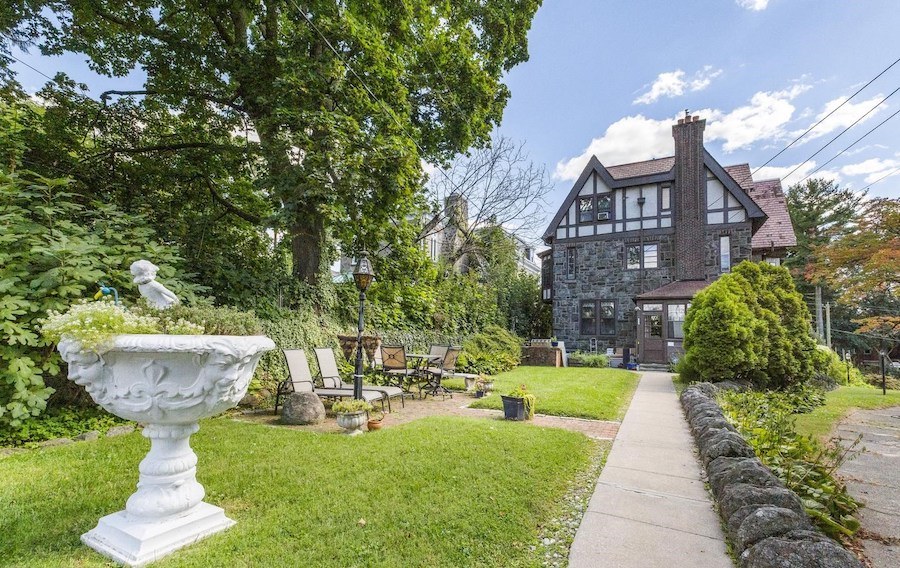 Part of this house’s backyard became a brick-paved lot with parking for four cars. The rest remains attractively landscaped with perennials, a vegetable garden and a fig tree.

Fischer and Perez have clearly been great stewards of this local landmark, and now that they’re ready to relax and retire to their second home in Perez’s native Puerto Rico, they have decided to offer this Roxborough Tudor house for sale.

“The kind of person who is going to buy this house is the kind of person who likes old houses,” she says. Like her husband. And like Fischer and Perez, I hope that whoever buys this house shows it the kind of love they have shown for it. The couple will help you along by providing documentation about its history. Local historian John Charles Manton calls it “truly a house worth preserving for future generations to come, if not for its architectural style alone.”

OTHER STUFF: The upper two floors of the rear extension were turned into a two-bedroom, one-bath accessory apartment by Clinton and Kay Olivier, who owned this house from 1967 to 1989 and also redid its kitchen in the 1970s; Perez also updated this apartment’s kitchen.

The apartment, which has its own separate entrance and is connected internally by the house’s original back stairs, currently has a tenant with a good payment history who is living there on a month-to-month lease requiring 60 days’ notice to terminate.

You could continue to rent out the apartment, which has never been vacant since it was created, and let your tenant help pay your mortgage. Or you could reincorporate it into the main house simply by removing the closets at the end of the second- and third-floor hallways.

Updated Oct. 19th, 4:08 p.m., to place the house in the correct neighborhood. The listing places it in Manayunk, but the Manayunk/Roxborough border actually runs to the southwest of this house.