Go puff on this: A recent analysis of sales data found that house values increased $17,113 more over the last four years in states where recreational marijuana is legal. 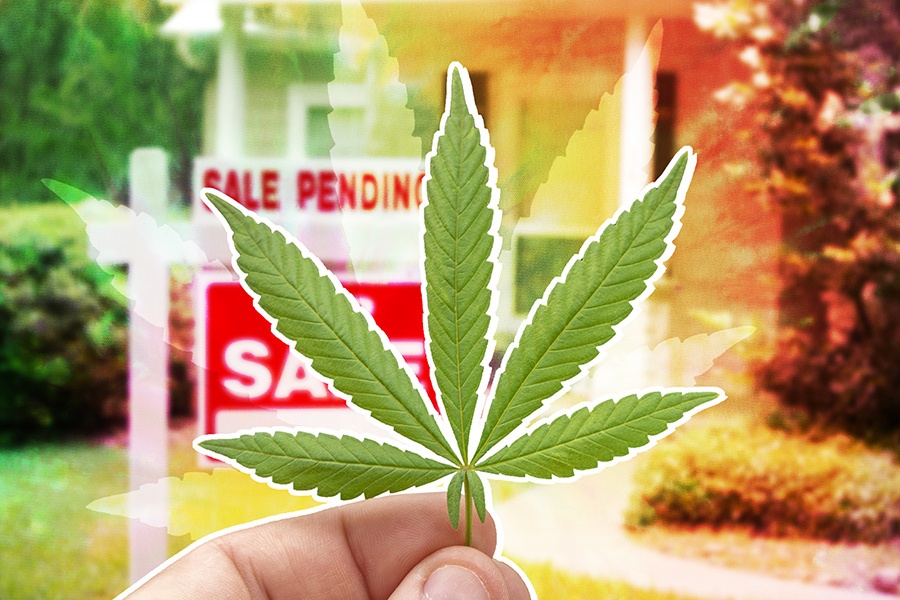 Legal grass means more green in your pocket when it comes time to sell your house, according to an analysis conducted by Clever Real Estate subsidary Real Estate Witch. | Photomontage: Jamie Leary

If you’re a homeowner who would like to see your house’s value grow like weeds, instead of going for the weed killer, you should be going for killer weed.

A recent report from Real Estate Witch, an affiliate of the Clever Real Estate online real estate referral service, found that in states across the country, marijuana legalization correlated with higher property values and millions of dollars in new tax revenue. Between April 2017 and April 2021, property values rose $17,113 more in states where recreational marijuana is legal, compared to those where it’s illegal or is only legal for medicinal purposes, according to the report.

House values saw serious increases in cities with marijuana dispensaries compared to those without. In fact, with each new dispensary a city added, Real Estate Witch found, property values increased by $519. The report’s figures are based on a regression analysis of publicly available house-value data from Zillow and population data from the U.S. Census Bureau.

But Philadelphia doesn’t have a single recreational marijuana dispensary. In order to legally roll a joint in Pennsylvania, residents have to register with the commonwealth, get a doctor to certify their eligibility, pay for a medical marijuana ID card, and buy their “bud” from one of the state’s few legal dispensaries. Last year, police in Pennsylvania made more than 20,000 arrests for possession of marijuana. And as nearby states like New York and New Jersey legalize, cannabis tourists from Pennsylvania — and thousands of their dollars — will soon pour into the legal weed market.

Now, the report says, you can add the value of your house to the losses Pennsylvania residents will rack up as recreational weed remains illegal.

But what does weed have to do with your home’s value anyway? While marijuana can be magic in some ways, it can’t just raise property values on its own.

Francesca Ortegren, data scientist at Clever, points to the economic activity that comes along with legal weed to explain the relationship between house values and legal marijuana. “There are jobs created [and] there’s more money put into the state because taxes tend to be pretty high on recreational purchases,” Ortegren says. “That’s really pushing up those home values.”

The economic activity that pushes up house values comes in what the report describes as both “predictable” and “surprising” ways. Legal marijuana, for one, creates jobs. According to Leafly, a website that connects users with legal, licensed marijuana dealers, the legal marijuana industry supported 321,000 jobs as of early 2021. For comparison, that’s more than 1.5 times the number of practicing dentists in the U.S.

Not only are jobs created in the marijuana industry, but legal weed also attracts tourists and other accommodations to support the new economy. After Colorado became the first state to legalize the plant recreationally, hotel revenue soared by nearly $130 million. New jobs mean new residents moving into town, new visitors spending money (on cannabis and other things), and above all, new tax revenue.

For Lt. Gov. John Fetterman, a long-time vocal proponent of marijuana legalization in Pennsylvania, the decision is a “no-brainer.”

For Fetterman, one of the key reasons to legalize marijuana is tax revenue, which could be used to solve problems and improve public goods. He offers the example of using marijuana tax dollars to fix the commonwealth’s deteriorating infrastructure. “Pot for potholes” is what he calls it.

Real Estate Witch also reports that in municipalities where marijuana is completely legal, crime rates have decreased as police no longer need to prosecute low-level marijuana offenses. Available marijuana also means more access to care for those with chronic pain, and it may even be a way to decrease alcohol-related illnesses and deaths. Go puff on that, if you will.

So why hasn’t Pennsylvania legalized? Fetterman points to persistent partisan hostility in Harrisburg. While a supermajority of Democrats and many Republicans are on board, a small sect of Republicans in the state capital remain opposed, putting an indefinite block on any progress. Fetterman blames a refusal to let the Democrats “win” or the fear of “Reefer Madness.”

Legalization is on the horizon, though; Fetterman says this is inevitable. This past February, Republican State Sen. Dan Laughlin of Erie, joined by Philly’s own Democratic State Sen. Sharif Street, introduced a bill in Harrisburg that would finally legalize marijuana for recreational use. The new legislation would allow residents over the age of 21 to possess 30 grams of cannabis flower (which is equal to about an ounce of smokable weed). It would also release anyone incarcerated for nonviolent marijuana offenses and expunge the records of those convicted of low-level marijuana-related crimes. Under this law, Pennsylvania’s medical dispensaries would be allowed to make the transition to selling recreationally.

But until the bill turns into law, Pennsylvania’s economy and real estate market may continue to miss out.

“Pennsylvania only harms itself every week that passes that we aren’t having this conversation in a serious, earnest manner,” Fetterman says. He mentions the thousands of people being charged for marijuana-related offenses every year and the millions of dollars being poured into the economies of neighboring states like New Jersey.

At the end of the day, Fetterman sees legal weed as a net positive for all, even in the more unexpected of ways. “As a freedom-loving conservative or a cannabis-loving liberal, whatever that is, wherever you’re coming [from], there’s something for everybody here.”