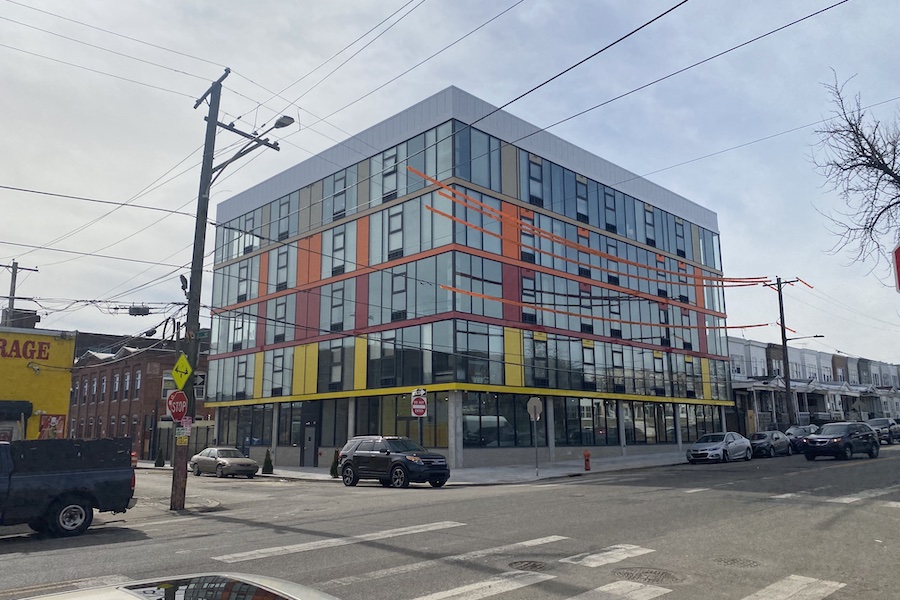 The finished product at 3460 J St. is more colorful than the renderings depicted it. On the inside, the building is at once raw and sophisticated. | Photos: Sandy Smith unless otherwise noted

The loft-apartment aesthetic remains popular with a large swath of city-lovers. These fans of industrial chic have flocked to the converted factories and warehouses found in neighborhoods all over the city, and builders have responded by scooping up old industrial buildings further and further afield from the neighborhoods like Callowhill and Northern Liberties where such buildings abound.

George Manosis was one of the first developers to venture all the way up to Harrowgate, the neighborhood between Kensington, Port Richmond and Frankford that was also once a hub of industry. When he opened the first building of the J Street Lofts complex, the neighborhood’s other big factory converter was Shift Capital, a social-impact developer who aimed to make those old factories employment hubs again.

3450 J St., a two-story former factory, demonstrated that renters were willing to follow Manosis up the El, and since then, other developers in the neighborhood, including Shift, have converted more factories into apartments. (Shift’s first residential building in Harrowgate, in fact, is just down J Street from Manosis’ loft complex.)

But even as he was working on 3450, Manosis realized that they weren’t building any more old factories. So he decided he would build a new one, so to speak.

Chances are that if someone were building multi-story factory buildings today, they might well resemble 3460 J St. Ian Smith Design Group designed the building much like a Bauhaus-style factory, with large windows and an all-concrete frame. 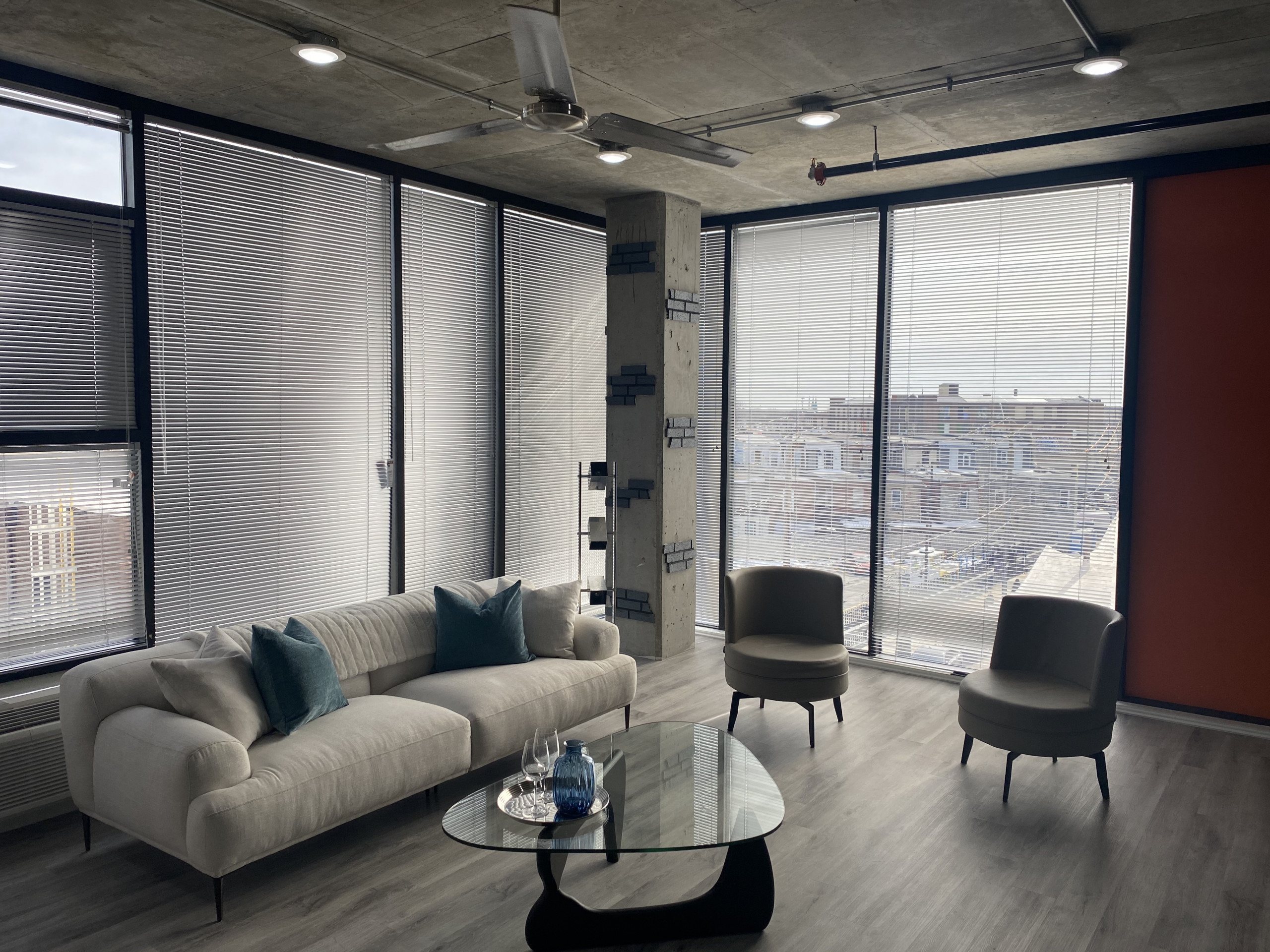 Inside, both the apartments and the street-floor commercial space have raw concrete ceilings and exposed electrical and plumbing lines. As a result, the apartments inside have that factory-chic look, yet they’re new from the ground up.

The industrial sensibility even spread to the one part of each apartment with a “finished” ceiling, namely, the kitchen. 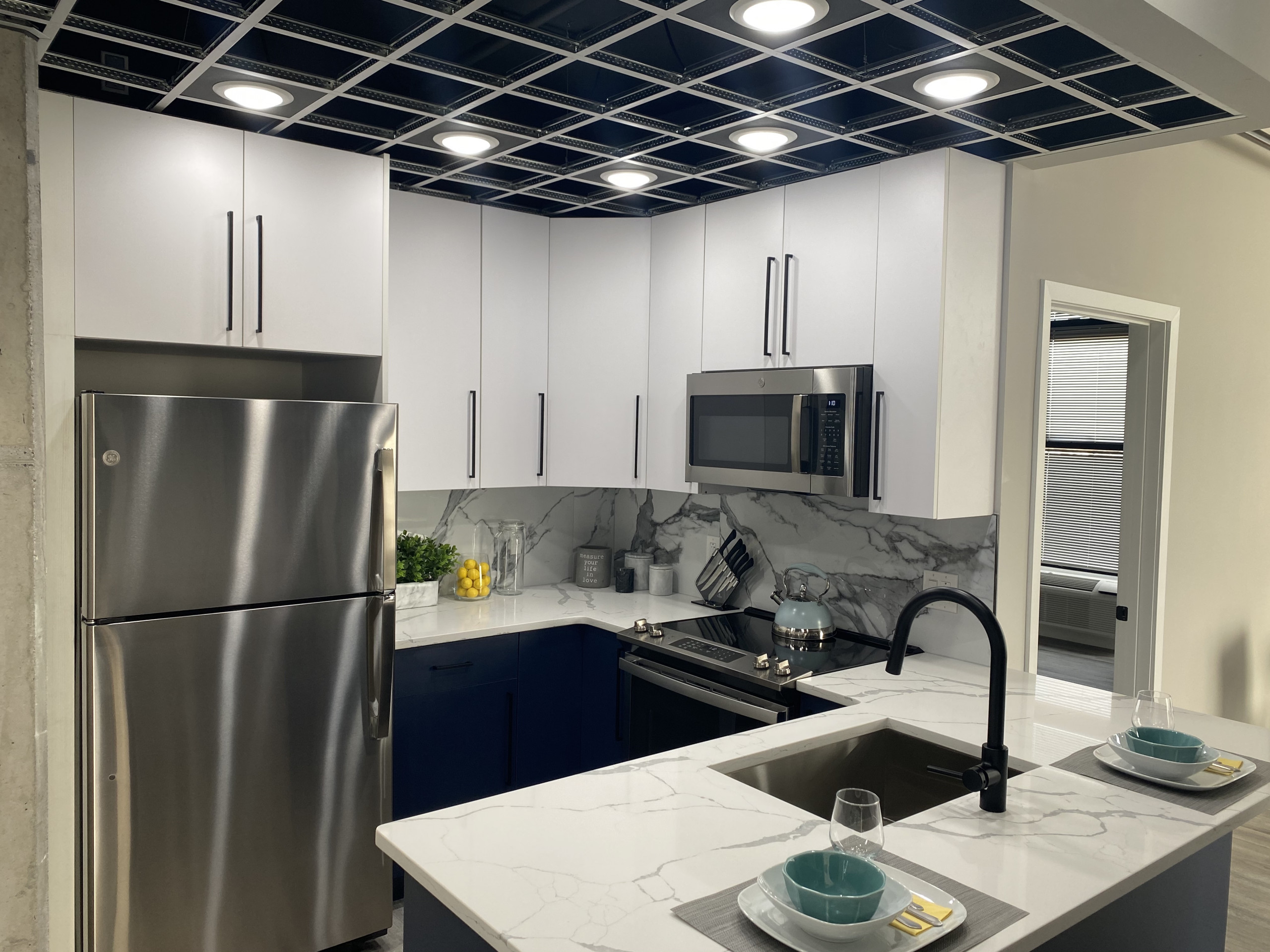 Kitchen of the model apartment

Stronghold Development, the construction arm of Manosis’ real estate enterprise, installed the framework for a dropped tile ceiling in each kitchen but omitted the ceiling tile, except where lights were placed. “We think it’s a cool aesthetic,” says Anthony Castaneda of Keller Williams Philadelphia, who is part of the team that markets this development. 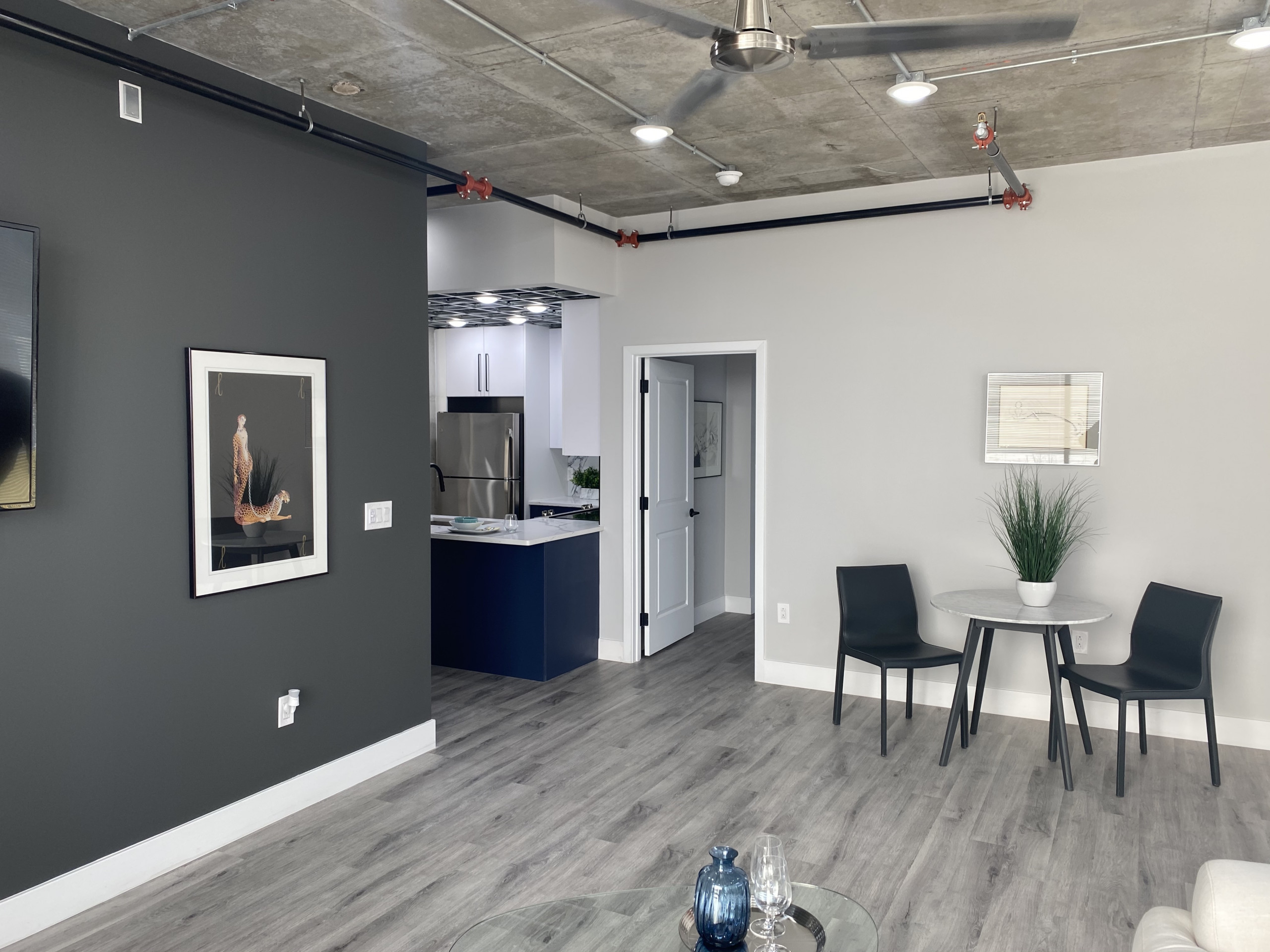 Everywhere else, the energy-efficient LED lights are fixed directly on the ceiling, with exposed conduit connecting them. 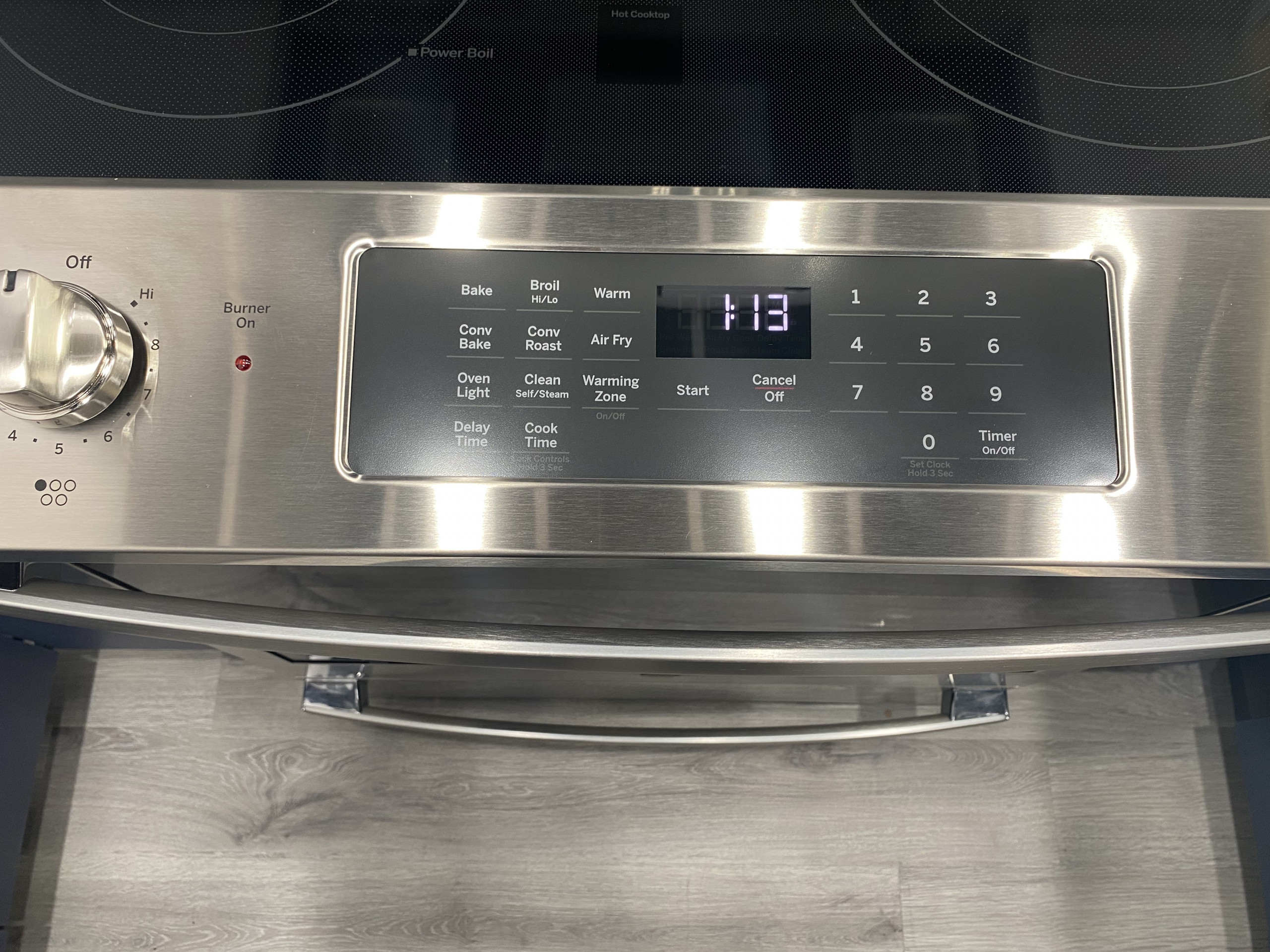 The LED lighting is just one of the truly up-to-the-minute features found in this building’s units. Another is the GE Profile ranges found in each apartment. These are equipped with air fryer convection ovens.

And while the apartments are reasonably priced, they didn’t skimp on the finishes and fixtures. The kitchens have quartz countertops and marble backsplashes. 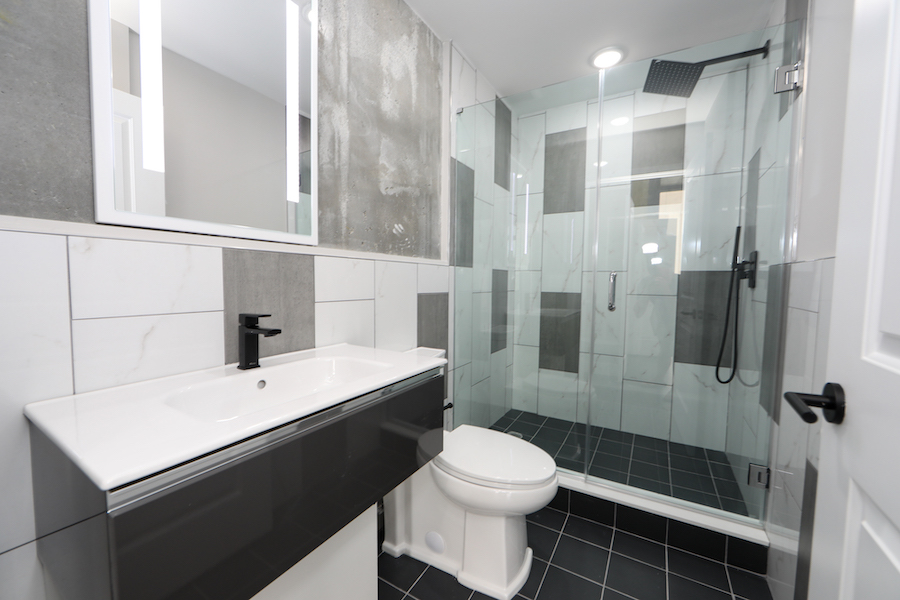 Tenants have access to the same amenities as the residents of 3450; the two buildings together comprise the J Street Lofts complex. Those amenities include a fitness center, a dog walk, a lobby lounge and the outdoor courtyard between the two buildings. 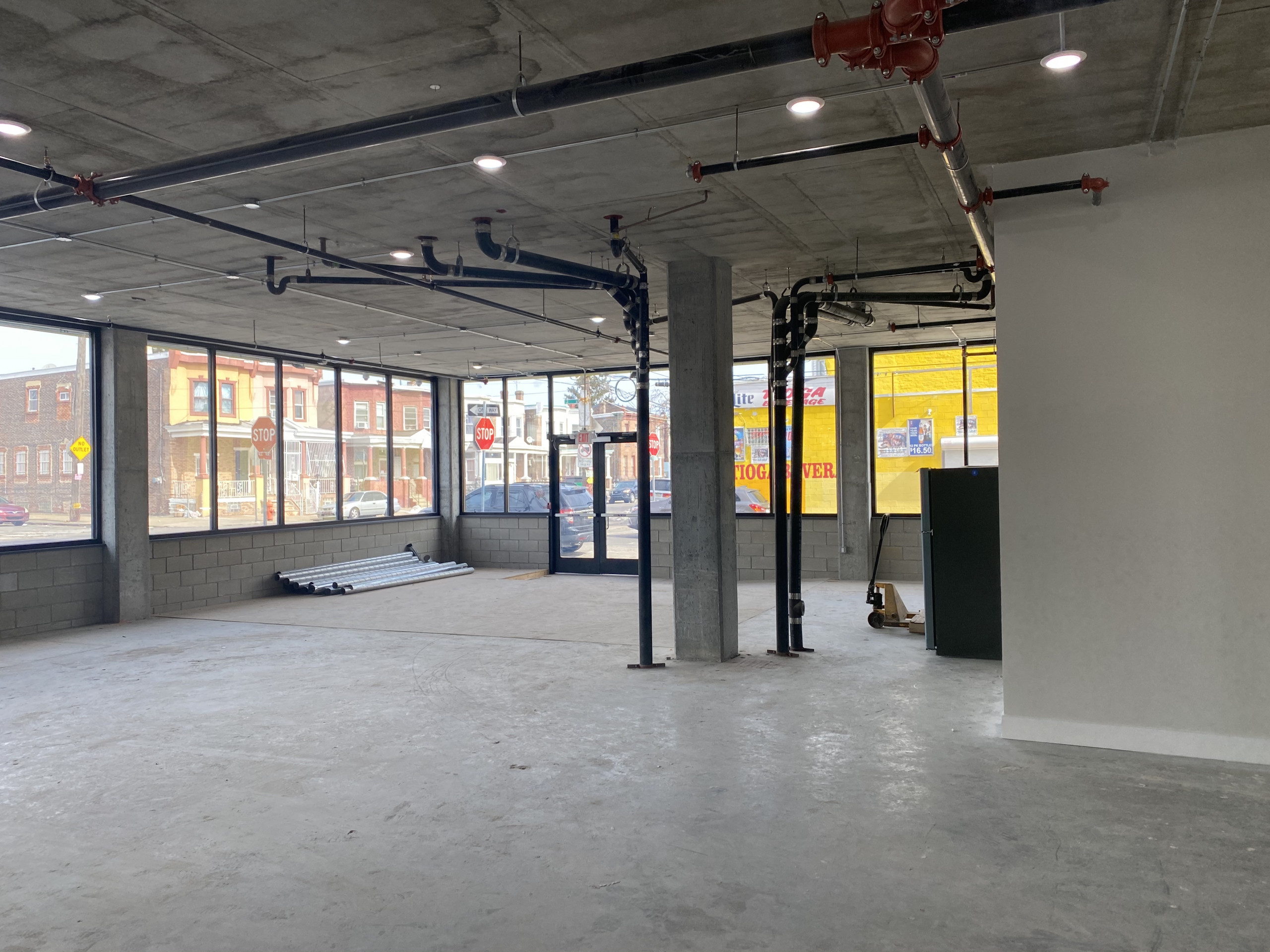 Manosis has been building residences in Harrowgate for more than a decade now. What attracted him to the neighborhood was its accessibility.

“I saw the infrastructure here,” he says. “All along Aramingo Avenue” — close to where I-95 and the Betsy Ross Bridge meet. “You can be in New York or Cherry Hill easily,” he says, “and it’s 15 minutes to Center City” thanks to the Market-Frankford Line, whose Tioga station sits one block east of here. Manosis also offers parking with units at J Street Lofts.

Castaneda notes that in contrast to some low-income neighborhoods where new development is greeted with alarm, resistance or both, Harrowgate residents have reacted favorably to the new development in the area. And that’s good, because Manosis isn’t done building here yet. He has several reconstruction projects in the pipeline and also plans another new construction building like this one.

Which means that if you want that old-factory-loft aesthetic and new construction too, you won’t be out of luck when this building is fully leased.

Number of parking spaces: Parking is not provided on-site, but parking for one car in a nearby secure gated lot is included with the rent

Number of bike parking spaces: A secure bike rack is available on site