The J-Centrel mixed-use development in Harrowgate not only invites residents to pitch in for a better community, it makes it worth their while to do so. And that's not all it does to build a better Kensington. 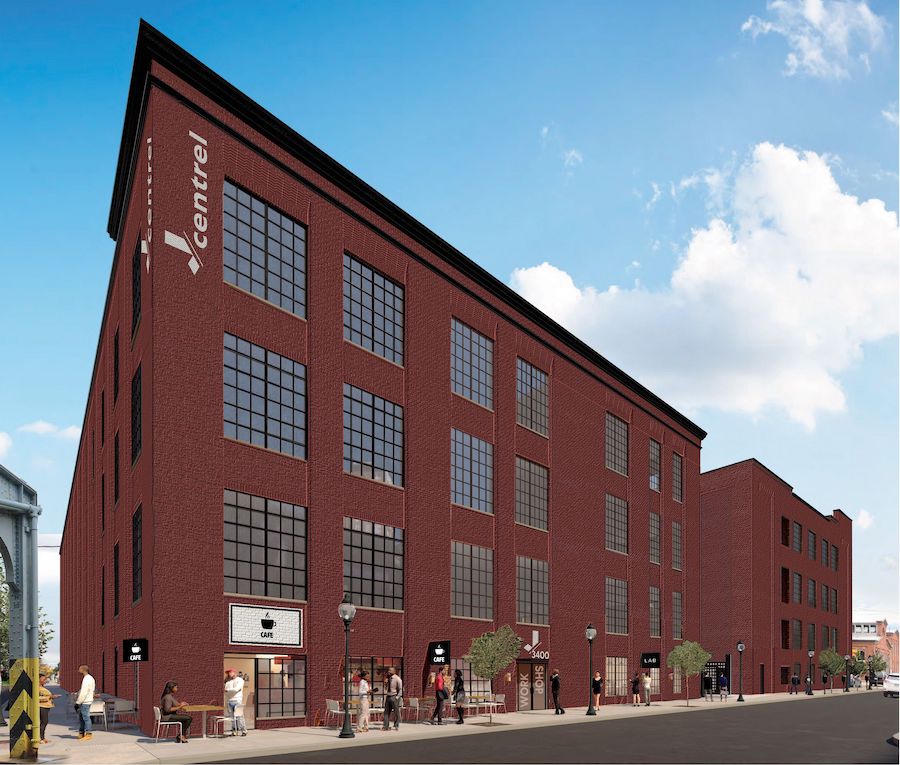 This rendering of what J-Centrel will look like when complete was made before Càphê Roasters was chosen as the cafe. Its opening will be the last piece of the puzzle to be assembled. | Rendering: Shift Capital; photos: Philadelphia Real Estate Photo via Shift Capital

If you’re an artist, you can take your pick from any number of new and repurposed buildings designed to offer you affordable space where you can live and work.

If you’re a teacher, there’s a converted factory in East Kensington that gives you a break on affordable apartments that offer you a supportive community of kindred souls.

But what if you’re neither an artist nor a teacher, but would like to do good work in your community?

J-Centrel will cut you a break.

The Harrowgate mixed-use office/residential/retail building not only invites residents who would like to serve their neighbors, it encourages them to via its “Good Neighbor Program.” 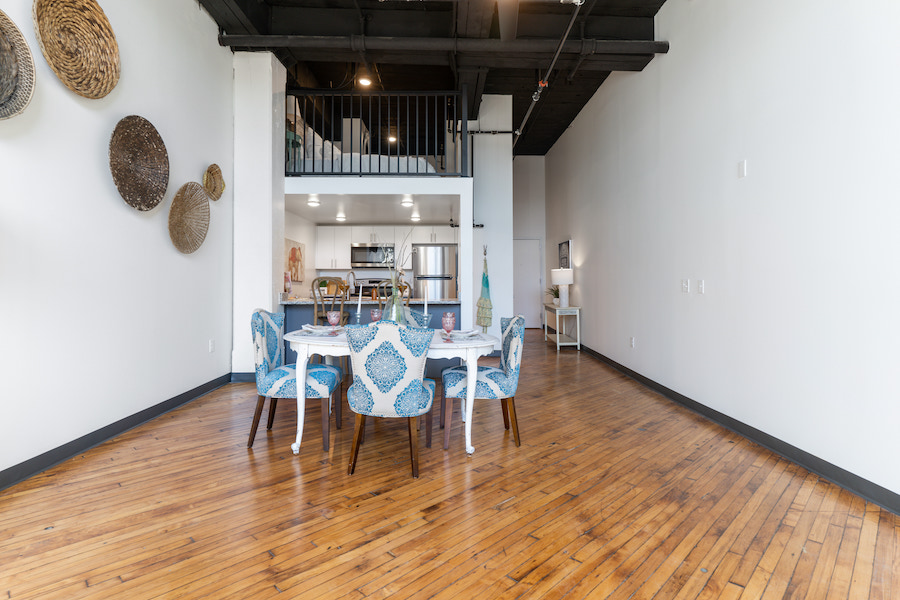 As befits a onetime factory, loft apartments make up the bulk of the units at J-Centrel. These photos show the interior of a studio loft apartment, here looking towards the kitchen and sleeping loft

J-Centrel residents who participate in the program can choose volunteer projects with any of more than a dozen partner organizations that work to improve the quality of life for Harrowgate and Kensington residents. If the residents of a unit contribute four hours of their time each month to volunteer work, $100 comes off the rent for the unit.

And the rent incentive program isn’t the only community-building activity going on in J-Centrel. The building is also home to a multipurpose co-working facility called the IF Lab. “IF” stands for “Idea Factory,” which is what the space aims to produce: its goal is to help entrepreneurs in underinvested neighborhoods turn their ideas into viable companies, with a special focus on minorities, low-income individuals and Kensington residents. 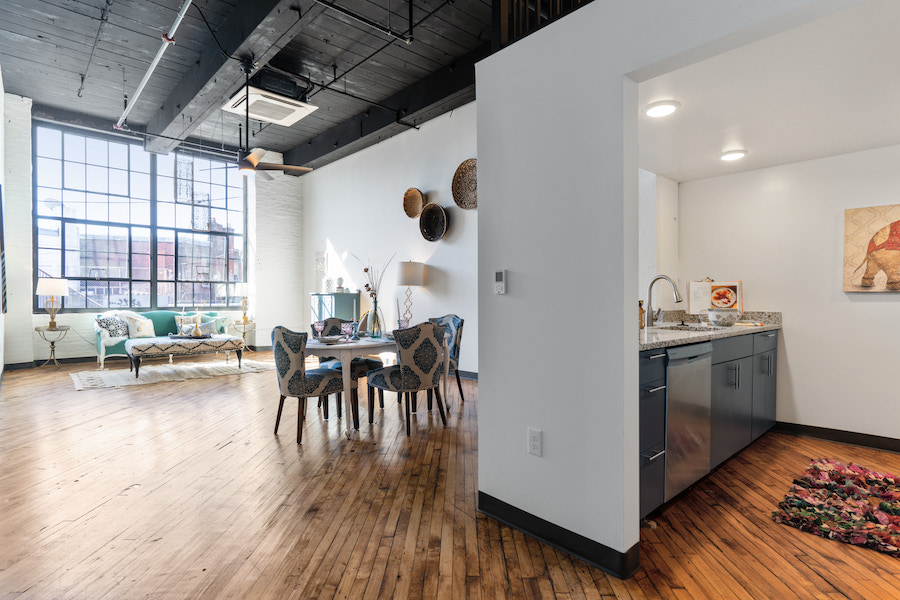 Then there’s one of its retail tenants, Càphê Roasters. The Best of Philly-winning roastery, co-founded by a Vietnamese-American Kensington resident and based nearby, will open its first cafe location on the street floor this spring. Càphê, which specializes in roasting and making Vietnamese coffee, also has community-building in its mission: it hires graduates of 12+, a program that promotes educational equity for public-school students, and it distributes its coffee through local and neighborhood-based businesses.

All of this is by design, says Brian Murray, CEO of Shift Capital, which developed this project in partnership with Smith & Roller, a design and development firm founded by social-change entrepreneurs Tayyib Smith and Megan Denenberg and developer Jacob Roller, son of architect Jerry Roller.

“The goal for us is to have the most civically engaged building in the country,” says Murray. 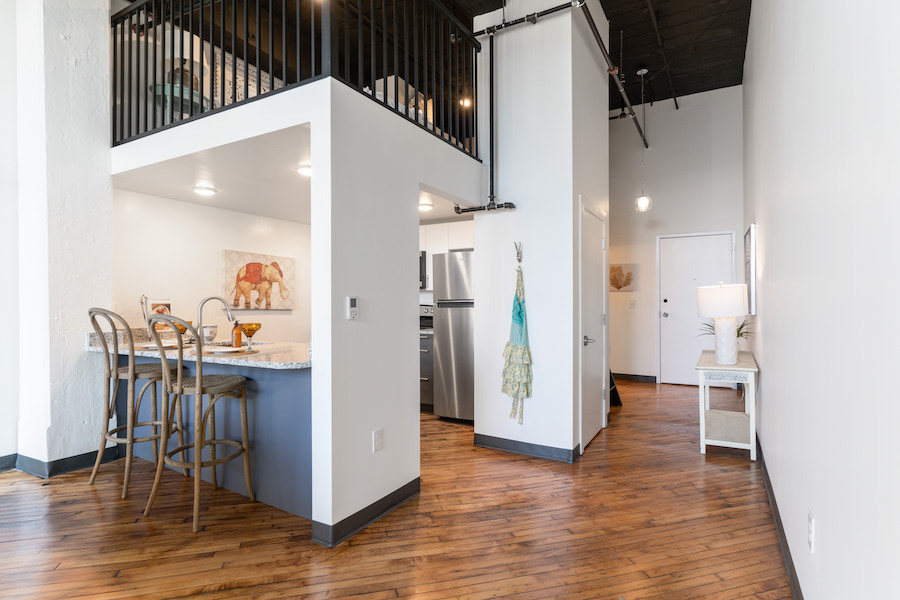 Sleeping lofts above modern kitchens make efficient use of space

Another goal is to create a new market-rate apartment building that fights gentrification rather than abets it. Murray explains that both the project’s affordable units and the rent incentive help here.

The Good Neighbor program is also designed to prevent one of the more damaging side effects of gentrification: Bringing in new residents who act as though they are discovering uncharted territory because they make no connections to those already living there.

“This neighborhood needs folks with more discretionary income. And we need some density to support neighborhood businesses,” says Murray. “But most importantly, we need to think about the challenges and fear that come with change in neighborhoods.” Through programs like Good Neighbor and facilities like the IF Lab, “we view this building as a bridge and relationship builder between new and old.

“We’ve looked at how gentrification gone bad has worked in other places in the city,” he continues. “One of the common narratives is that the incoming community doesn’t talk to the old community and the old community feels uncomfortable talking to the new community.” The Good Neighbor Program, Murray says, functions much like the Peace Corps does: it gets those new residents out into that old community, where they then forge relationships with the existing residents.

Smith & Roller co-founder Tayyib Smith was looking for just this kind of project to design and develop. He already had experience developing co-working space: he headed the team that brought Pipeline’s community-focused, design-forward approach to co-working from Florida to Philadelphia. 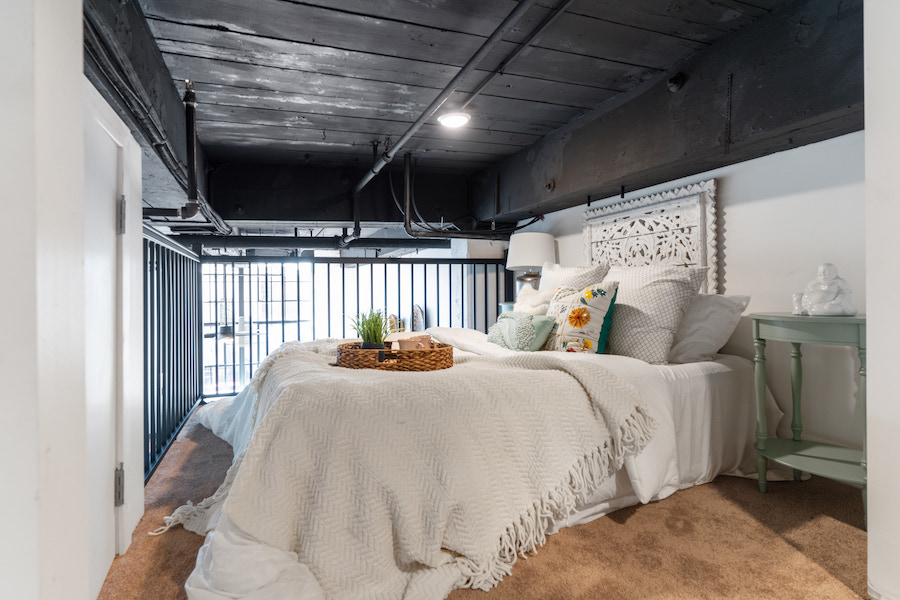 The lofts also give you a view of the living space with its black beamed ceiling. Some units have in-unit laundries while others have shared laundry rooms

His work on that project got him to think bigger. “I would ask different people, ‘How do you do development without displacing people?’” he says. “Most developers would kind of look at me blankly. They didn’t understand the question, or they would frankly say, ‘That’s just what it is. It’s like “Monopoly,” that’s the ecosystem.’ And Jacob Roller was the first person who answered me inquisitively and said, ‘I don’t know, I’m doing work in North Philly right now and I’m trying to figure that out.’”

Roller was already talking with Shift Capital about participating in the J-Centrel project in some way. Smith saw the IF Lab as the concrete, brick and steel expression of the goals of his Institute for Hip-Hop Enterpreneurship. Together, they pitched Shift Capital on becoming co-developers of J-Centrel, and Murray agreed.

The IF Lab works in the opposite direction from the Good Neighbor Program: it brings the existing residents into the building to take advantage of its resources. And Smith sees it as a natural extension of his efforts to transform communities and society through both enterprise and community-building.

“Outside of structural racism, there’s no reason why we shouldn’t be bringing the best of 21st-century innovation, programming and mentorship to the core of where inequality is there by design,” Smith says. 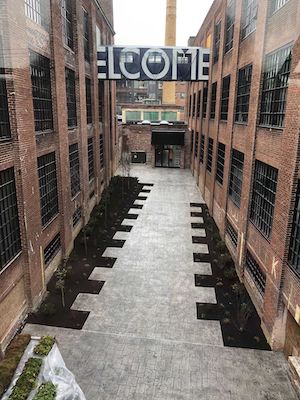 And like Murray, Smith is also interested in tearing down the barriers that keep newcomers and established residents from getting to know one another. “One of the most painful things I’ve heard people talk about for 20, 30 years in the city is, African-American and Latino residents will say [of new arrivals], ‘They moved on the block, they don’t even say hello. And then they don’t even look at you.’”

Through the Good Neighbor Program, J-Centrel seeks to eliminate that problem. And by pricing apartments so that residents already living in Harrowgate have a shot at moving in, it also seeks to tear down those barriers.

It would seem that the rent discount would appeal most to a younger crowd, but Murray says that’s not the case. “Our first move-in is the mother of someone who works at the local nonprofit organizations and is probably in her 60s,” he says. “But to be fair, I imagine there will be a larger number of younger people moving in because these are primarily studios and one-bedroom loft apartments.”

The last piece of the community jigsaw puzzle to fall into place will be the opening of the Càphê retail shop later this spring. The coffee roaster was one of the winners of Shift’s Kensington Avenue Storefront Challenge, a 2018 competition to identify nine new businesses to repopulate the Kensington Avenue corridor in Harrowgate.  As J-Centrel sits at the intersection of J Street, Ontario Street and Kensington Avenue, Càphê, which is headquartered two blocks from here in the MaKen Studios building Shift also calls home, will also connect the project to the revitalization of the avenue.

The first tenants will move into J-Centrel’s apartments on March 1st. The IF Lab is scheduled to open in February. Renovations to the second building in the J-Centrel complex should wrap up by April, and the opening date for Càphê has not yet been set. Together, the three pieces of J-Centrel have the potential to rewrite the narrative of redevelopment and revitalization in Philadelphia’s underinvested neighborhoods.

Number of parking spaces: None; off-site parking is available for an additional $150 per month. Bike storage is available on-site.

Pet policy: Pets welcome, up to two per unit; applications considered on a case-by-case basis. Deposits range from $300 to $600 and a $50 per month pet rent applies. Contact leasing office for more details.

Good Neighbor Program discount: Residents can reduce their monthly rent by up to $100 per apartment by volunteering for up to four hours per month with any of 12 partner organizations active in Harrowgate and Kensington, with more partners being added. Contact leasing office or visit website for exact details.

Updated February 2nd, 5:22 p.m., to correct the move-in, opening and completion dates for the various elements of the J-Centrel complex.