On the Market: New Construction Condo in Fishtown (Almost)

This brand-new unit is convenient to everything you like about Fishtown — including the Frankford El, which it overlooks. Not that you'll be able to tell once you move in. 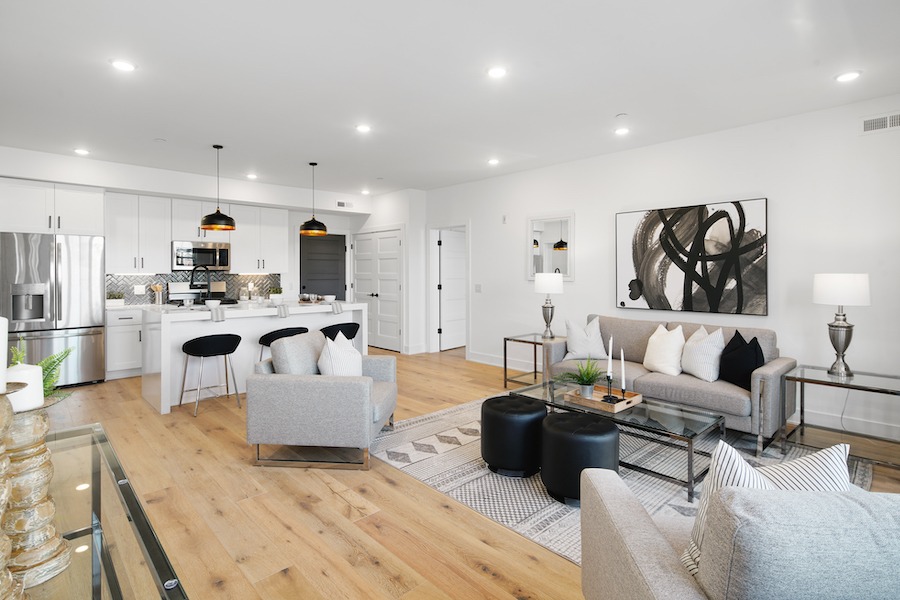 Walk through the door of this new modern condo and it’ll be as though the Frankford El never existed. Does this mean that you now can get to heaven on the Frankford El? Maybe not, but you can take it to 1232 N. Front St. #4A, Philadelphia, Pa. 19122 | Photos: Dan Robnett, PLUSH Image Corporation, via Space & Company

Readers of a certain age may have fond memories of “The Blues Brothers,” the 1980 film in which “Saturday Night Live” regulars John Belushi and Dan Aykroyd played the blues musicians they made popular on the variety show.

On “a mission from God” to rescue the Catholic orphanage where they were raised, the pair arrive in Chicago and rent a flophouse apartment next to a leg of the famed Loop ‘L’. Their attempts to converse in their apartment were foiled in a very funny scene in which a Chicago Transit Authority train passes by their open window every five seconds.

The good news about this new construction condo for sale on the South Kensington side of Front Street, right across from Fishtown, is that you won’t have to worry about either your conversation or your sleep being disturbed by the Market-Frankford Line trains that will roll just beneath your living-room balcony. Unless, that is, you open the windows or the balcony’s sliding doors to let some fresh air in.

“Can we hear you? El no!” reads a banner facing the Frankford El that hangs from Fishtown Station, the new condominium building in which this unit is located. 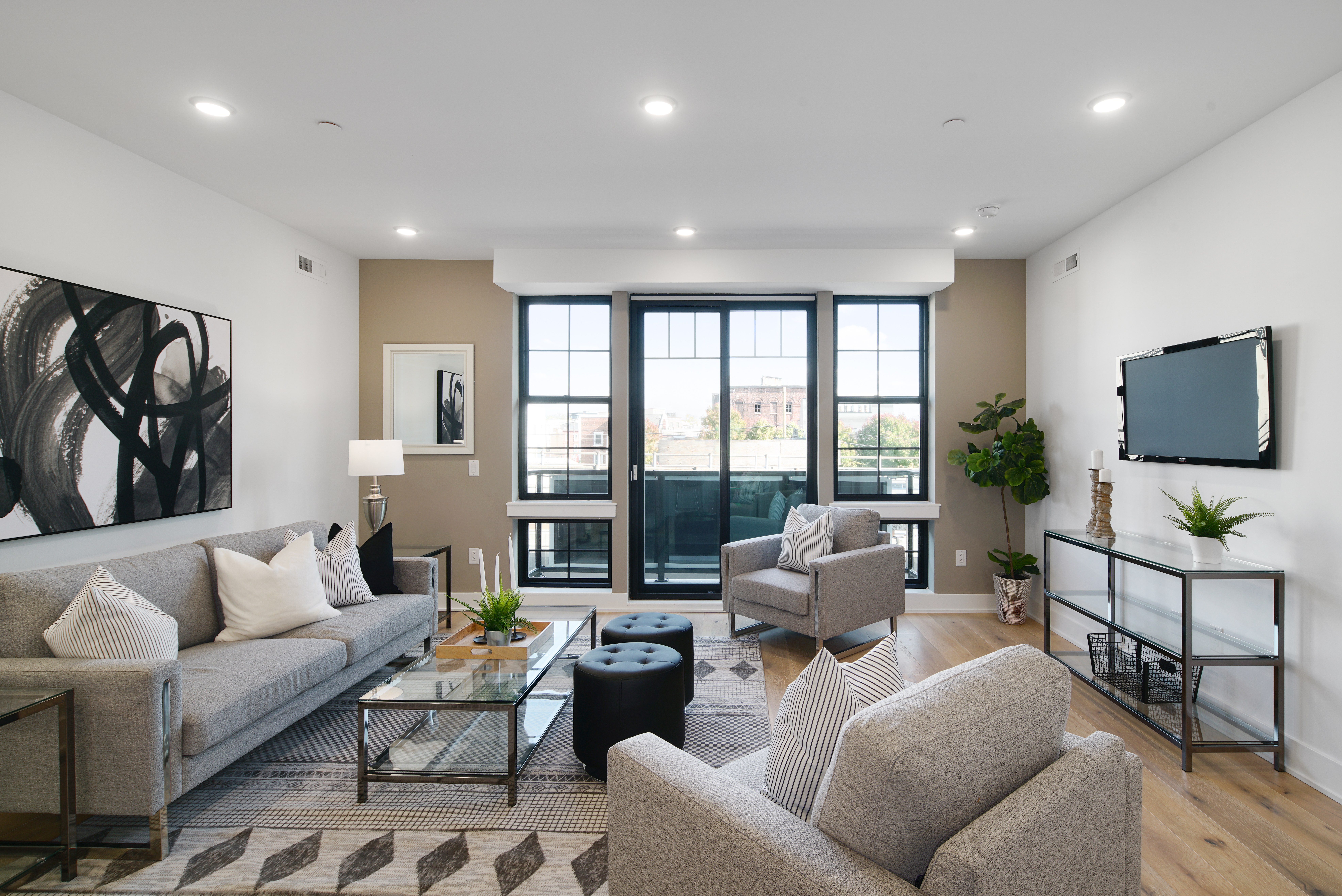 The reason you won’t hear the El rumbling past, says Space & Company’s Ryan Quinn, is because the builder added sound-absorbing materials to the exterior.

“They took extra care with the all-brick veneer,” he says. “They also added foam insulation to the front and used double-paned windows with gas pockets to reduce noise. 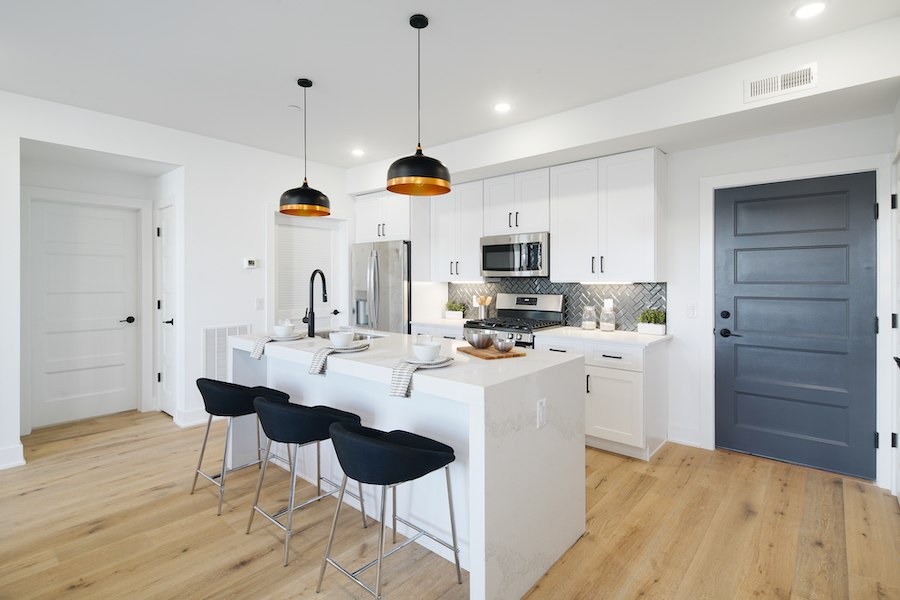 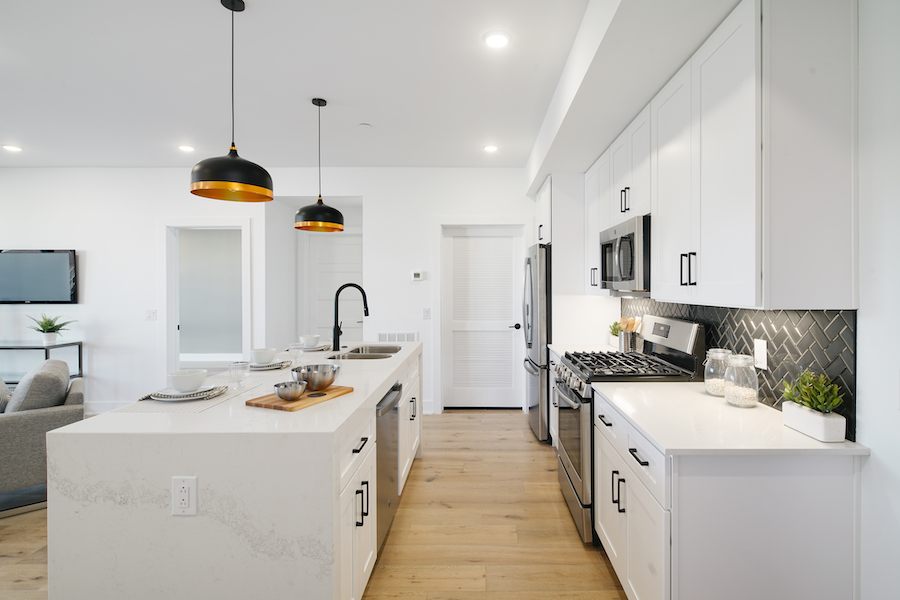 The condo itself is attractive and efficiently laid out, with an open main living/dining/kitchen area flanked by bedrooms on either side. One bedroom has a sliding-door closet while the other has an en-suite bathroom. The second bedroom and your guests can use the bathroom off the main living area. 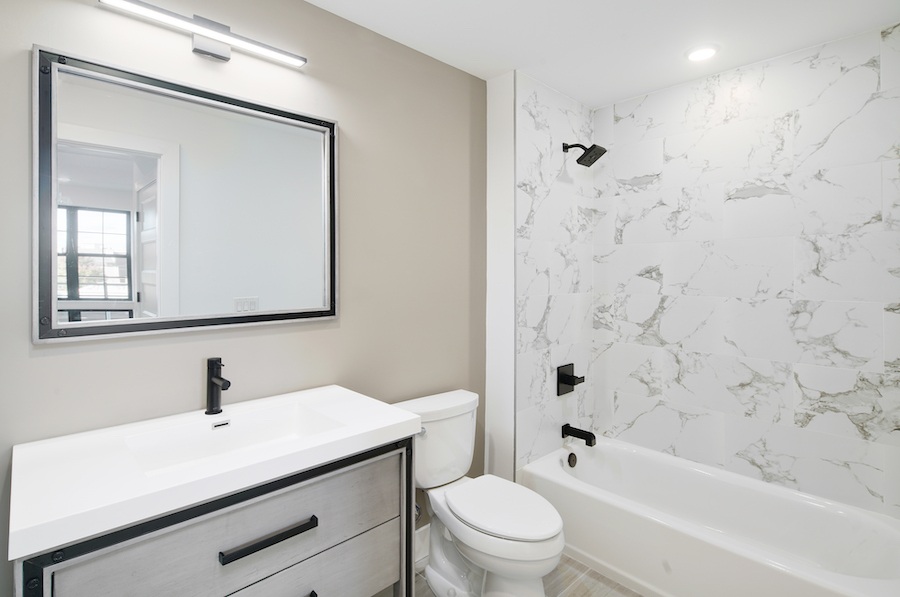 This new construction Fishtown Station condo for sale boasts stylish fixtures in those bathrooms, a marble tile surround in the master bathroom’s tub and shower and upscale GE appliances in its kitchen.

But the really cool amenities lie around you. They include the restaurants, bars and shops that line Frankford Avenue and several choice eateries along Front Street, including one that’s slated to open on the street floor of this building. The Delaware waterfront and its entertainment venues are a 15-minute walk from here. And when you’ve had your fill of Fishtown and nearby Northern Liberties, you can simply hop on the Market-Frankford Line to get to other great destinations.

But please, don’t just try to hop on a train as it passes by. You’ll get hurt. Take the less-than-one-block walk to Girard station instead.

OTHER STUFF: The $163 per month condo fee covers building and common area maintenance and insurance. You may if you choose purchase a parking space in the building’s garage for an additional $65,000; if you do not wish to buy a space, the seller will provide credit at closing for a one-year parking pass to the surface lot in the next block north at 1320 N. Front St. The photos are of another unit in the building with an identical floor plan and square footage. A few other units remain available in this development; inquire with the sales agent for more information.