Pearl Properties had a little more room to play with when it built this new tower off Rittenhouse Square. The company made the most of it. 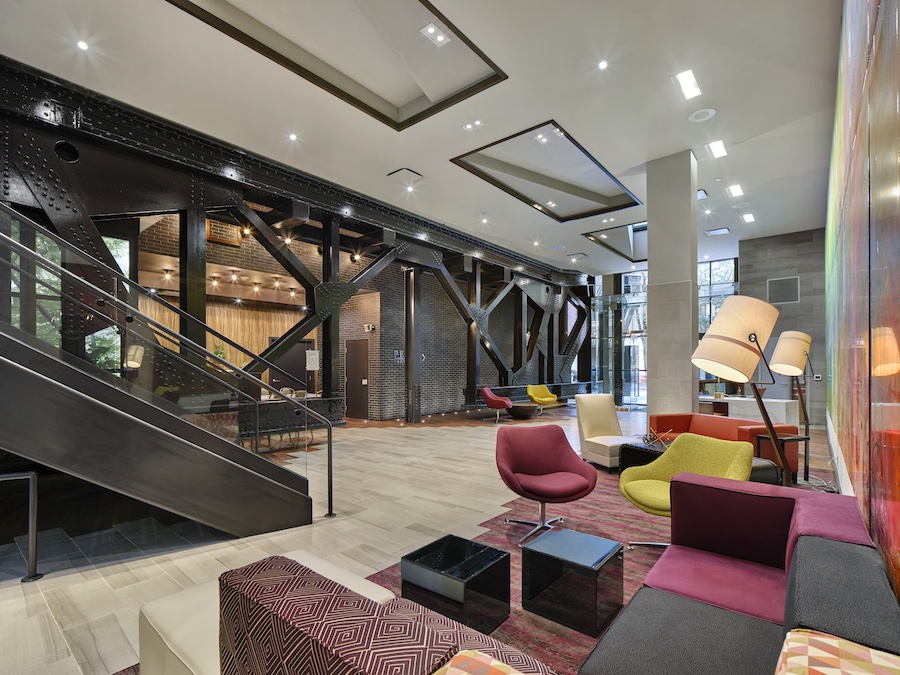 The main lobby and concierge desk at The Harper. The truss just inside of the far wall held up the balcony of the Boyd Theater, on whose site this building sits. | Photos of building and common spaces: DAS Architects via Pearl Properties; photos of model apartments courtesy Pearl Properties

But when a builder tries to fit all of these things into a typical urban building lot, something usually has to give. Either that, or the building gets a large podium. In that podium goes all the stuff requiring indoor space, and sometimes the pool too; on top of it goes the outdoor terrace.

Truth to tell, The Harper, Pearl Properties’ new high-rise on 19th Street just below Chestnut, has a podium as well. But the way the developer fit it into the building’s larger-than-usual footprint, it’s hard to tell that it has one. 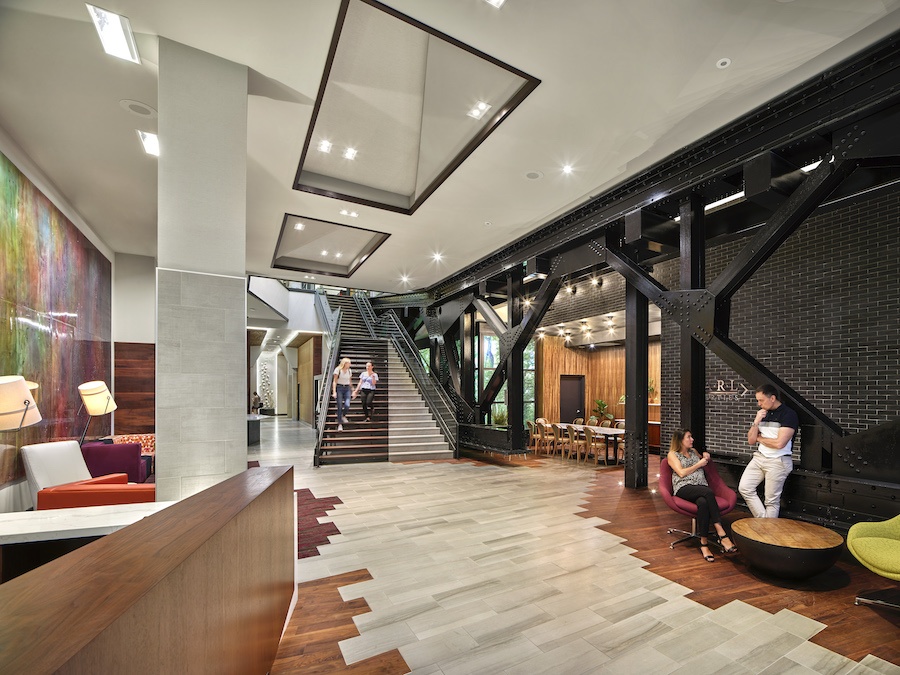 View of the lobby from the main entrance. The grand staircase leads to the co-working space, fitness center and club room

And because the building sits on a larger-than-usual footprint — specifically, the old auditorium of the Boyd Theater — Pearl was able to do some things many developers can’t.

Inside (and Outside) The Ludlow, East Market's First Apartment Building 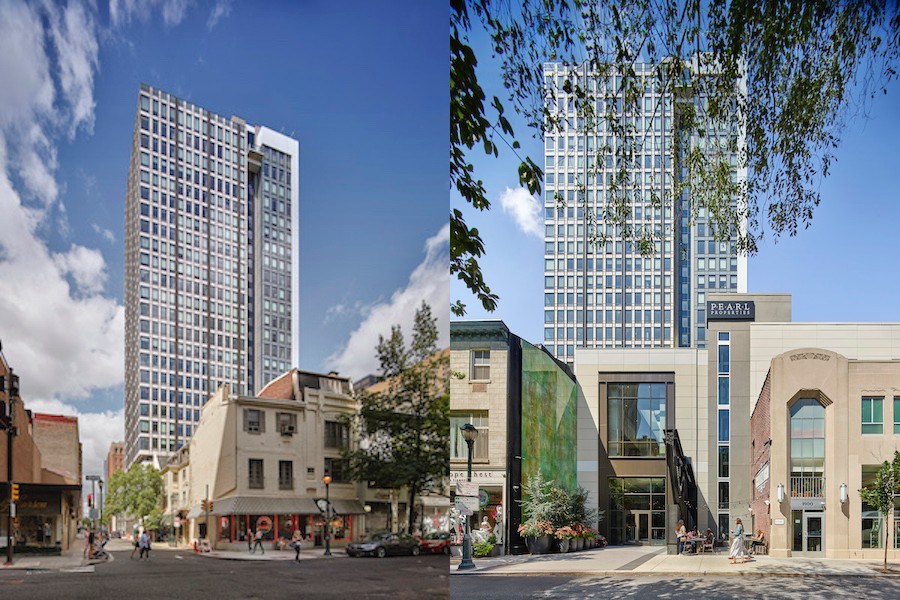 Left, the Harper apartment tower viewed from 19th and Sansom streets; right, the main entrance on 19th Street. Pearl Properties moved its offices into the top floor of the Art Deco building to the right of the entrance, built in the 1930s as the office of prominent African-American attorney Raymond Pace Alexander

The developer did that by inserting a large loading dock underneath the outdoor terrace to the apartment tower’s west. This dock is also connected to the apartment buildings and commercial spaces that abut The Harper on Chestnut and 19th streets. Pearl alllows the shop owners and residents of those buildings to haul their trash into the Harper loading dock, where trash trucks can enter and collect it.

That practical space is not the only creative thing Pearl did with this building. Many of its features and design elements add style and class to this property, and one in particular pays homage to the structure it replaced. 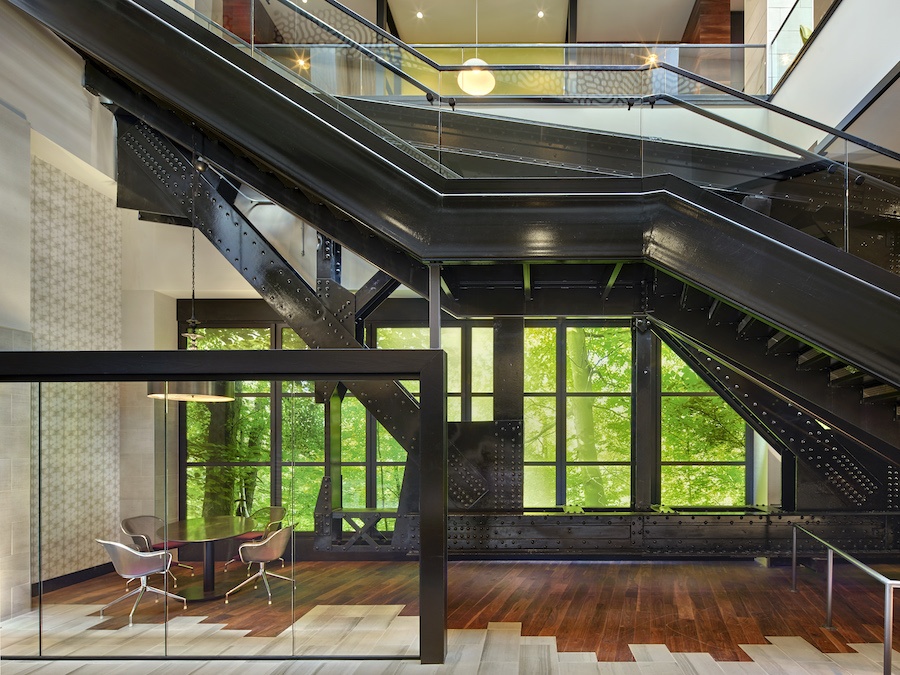 A backdrop of forests behind the K’Far “indoor garden” offers a splash of green to the lobby.

That element is the large steel truss beam that greets you as you enter the building and continues on into its main lobby. This truss had supported the balcony of the Boyd auditorium. Incorporating it into the lobby design gave the building a distinctive, buzz-worthy architectural element — and it also allowed Pearl to create two “courtyards” — one outdoors, one inside — for the building’s restaurant tenant, K’Far, the new coffee shop, bakery, bar and restaurant from Steve Cook and Michael Solomonov.

Incorporating it into the building was a spur-of-the-moment decision, says Pearl PropertiesDirector of Operations Brent Goldenhorn: “It was something that we decided to do kind of on the fly when we saw how gorgeous it was.”

It also took them extra time and effort to install it. As no single crane could hold the 110-foot-long, 150,000-pound steel truss, the construction crew cut it into thirds while they figured out how and where to site and support it. That took about six months, says Goldenhorn. Once they got those matters settled, they put the pieces back together in the place where they now sit and built the building around it. 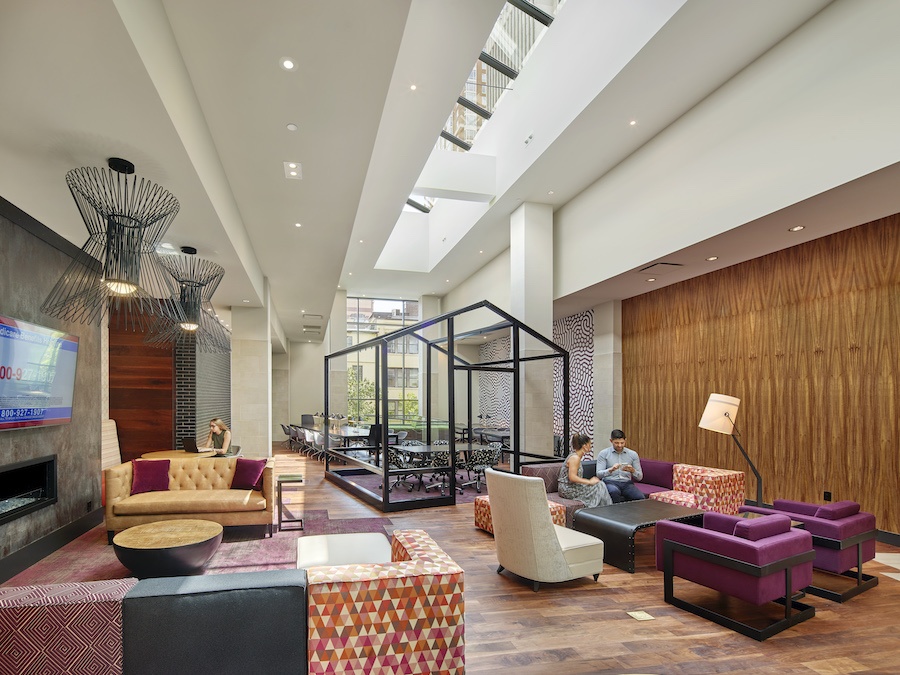 The co-working space on the second floor

The building, designed by DAS Architects with some late-game tweaks at the neighbors’ request from Cecil Baker + Partners, contains all sorts of goodies designed to make residents feel right at home. No, scratch that — they’re designed to make them feel like they’re staying at a luxury hotel. 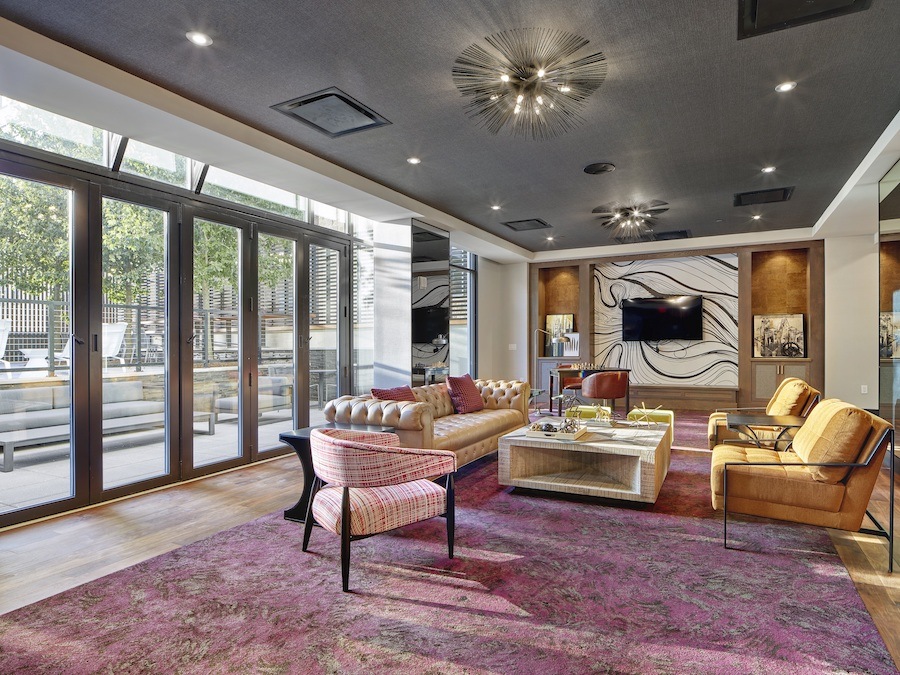 The second-floor club room, whose folding doors open onto the terrace

These include a dramatic, two-story lobby and function space, a conference room and co-working area, a fitness center, yoga studio and sports court, a lounge and game room… 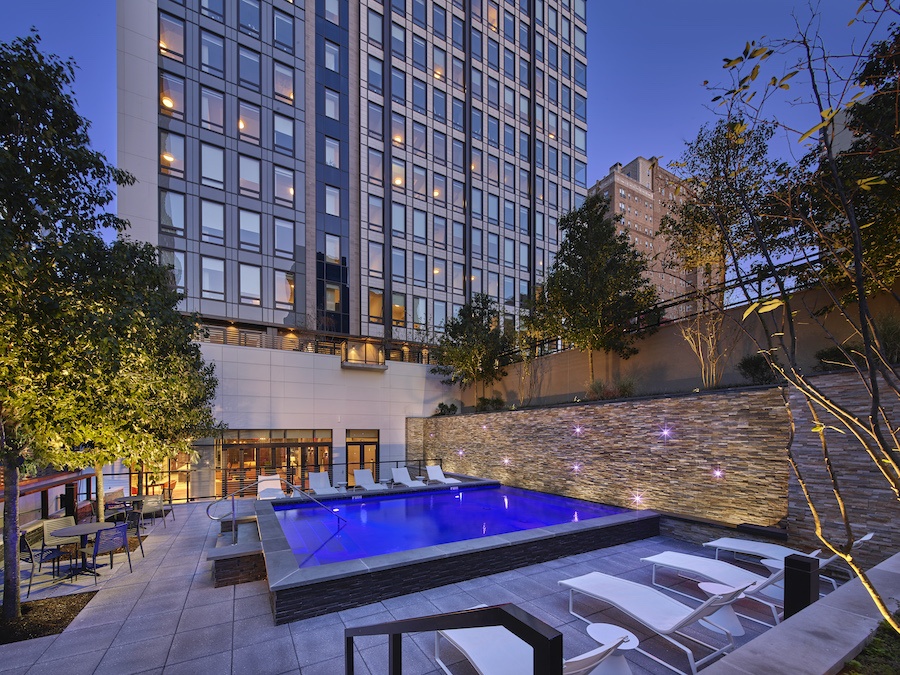 The pool level of the terrace

…and a 18,000-square-foot, tri-level outdoor terrace to die for. Just above the second-floor level is the pool, with a waterfall rock wall as a dramatic element… 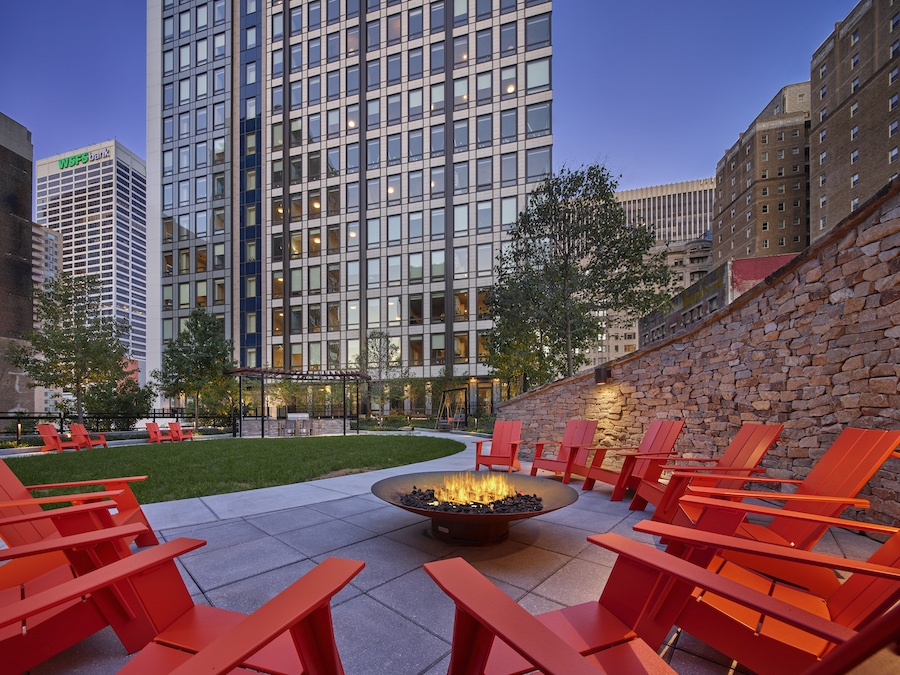 …and steps lead from it to the level above, which contains a fire pit, grills, outdoor dining area and dog run. There’s also an overlook to the level below.

Penthouse tenants also have their own club room on the top apartment floor with its own kitchen, fireplace, big-screen TV and sky deck. 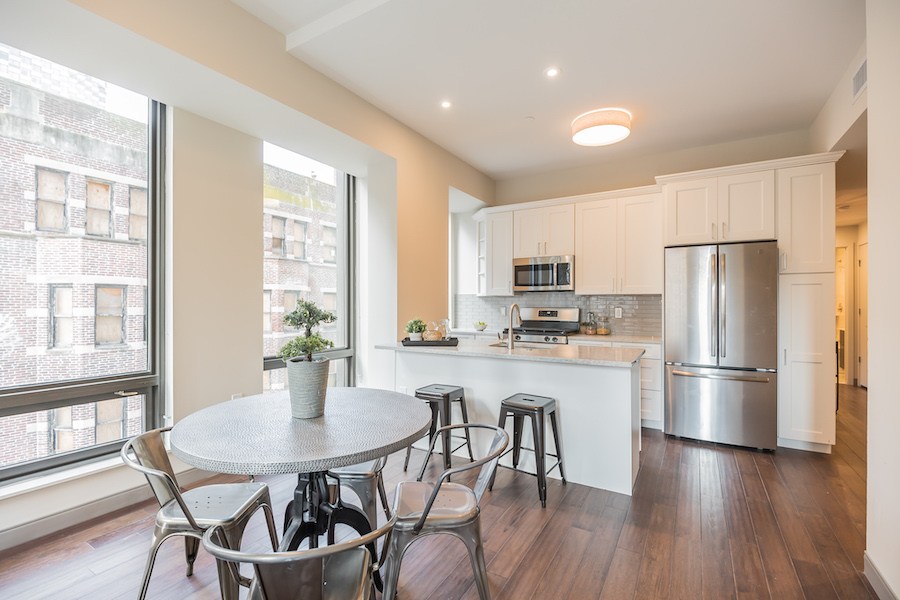 The dining room and kitchen of a model two-bedroom apartment

The main outdoor terrace is also part of the Harper’s green roof and stormwater management system. According to a statement from Pearl Properties, the vegetation and soil in the green roof system can store more than 63,000 gallons of water at any one point and can keep somewhere around 255,000 gallons of water out of Philadelphia’s storm sewers each year. 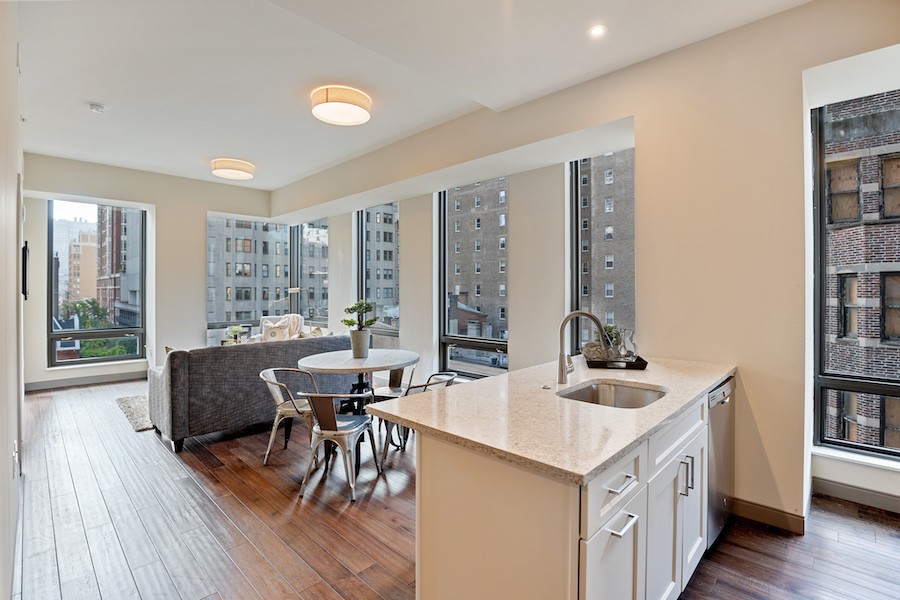 The dining and living rooms of the two-bedroom model. Windows that stretch almost the full height of the space give the units a light and airy feeling and offer great views of the surroundings

The various eco-conscious and energy-saving features in the building quite likely could have earned it LEED certification. But Goldenhorn says Pearl didn’t seek it: “LEED certification is very difficult for residential properties — it’s easier to obtain for more controlled office environments.” 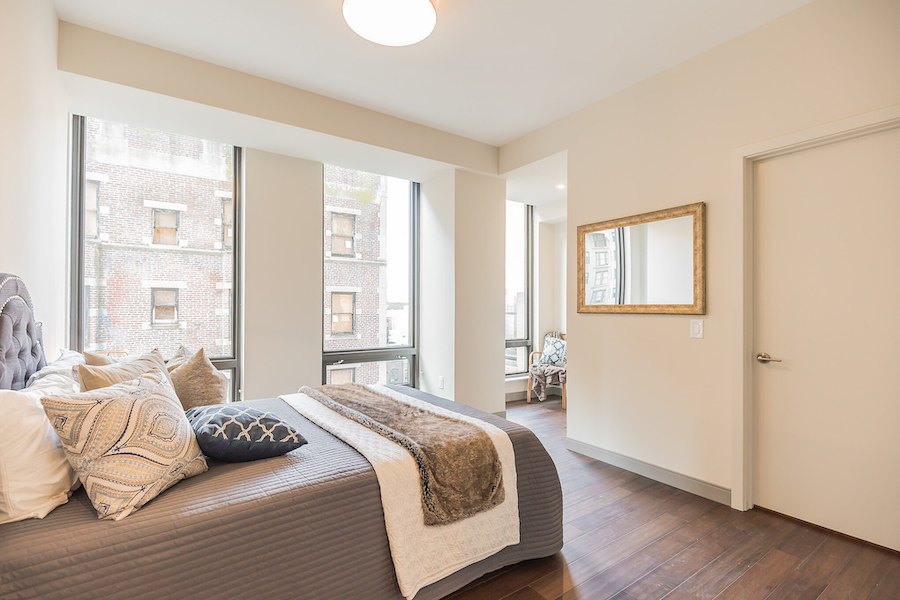 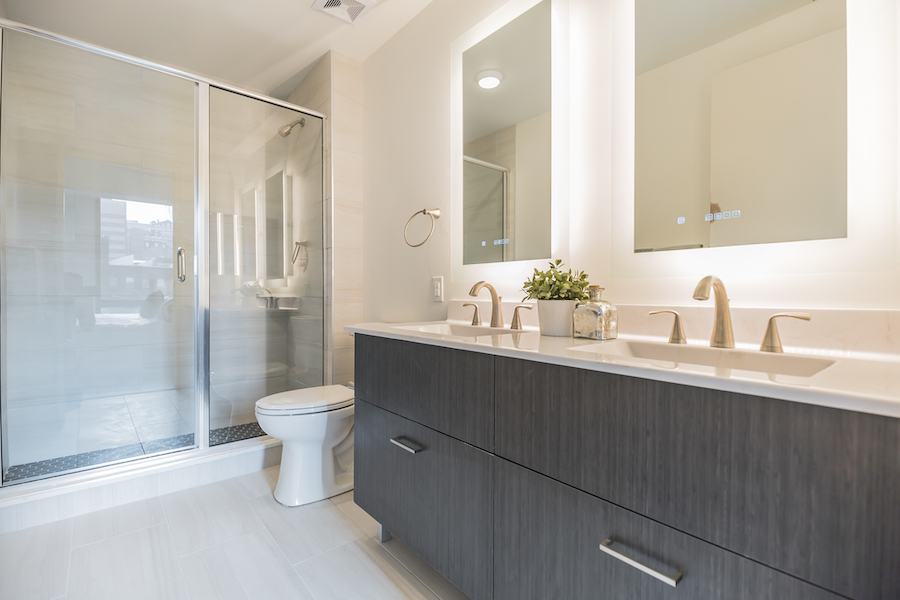 “But we have amazing green features,” says Pearl President James R. Pearlstein. “[Sustainability] is definitely important to us.” 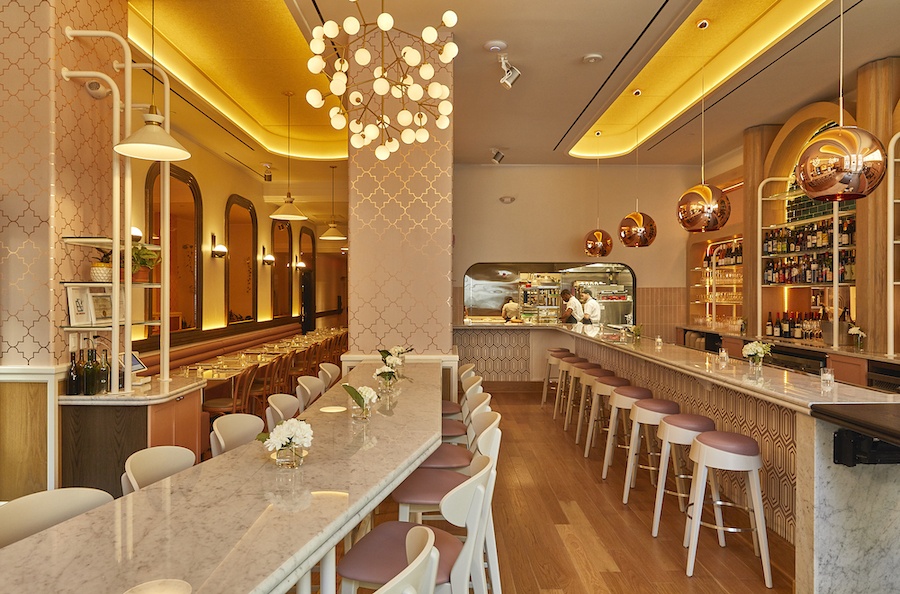 K’Far, which has entrances from the street and the lobby, is also meant to be an amenity for the residents as well as an addition to the Rittenhouse Square dining scene. It serves an all-day menu of coffee, baked goods, and sandwiches, plus cocktails and Middle Eastern-inspired main dishes at night.

The building’s office space is taken up by a Berkshire Hathaway HomeServices Fox & Roach Realtors office. Pearl is still seeking a suitable tenant, most likely a restaurant, for the other surviving fragment of the Boyd — its Art Deco foyer.

The building is named for Rittenhouse Square’s first developer, James Harper, whose 1840s mansion still stands on the square’s north side. A descendant of the two-term U.S. Representative from Pennsylvania was an honored guest at the Harper’s grand opening party Oct. 7th.

If all of these things plus a Rittenhouse Square address are important to you, then this is your apartment building. But you’ll have to wait a while before you can move into it, for it’s currently fully leased. But don’t worry — some tenants will move out eventually.

The Harper by the Numbers

Number of parking spaces: 160, in an underground garage