The second new residential building at East Market outpaces its predecessor in the amenities derby. 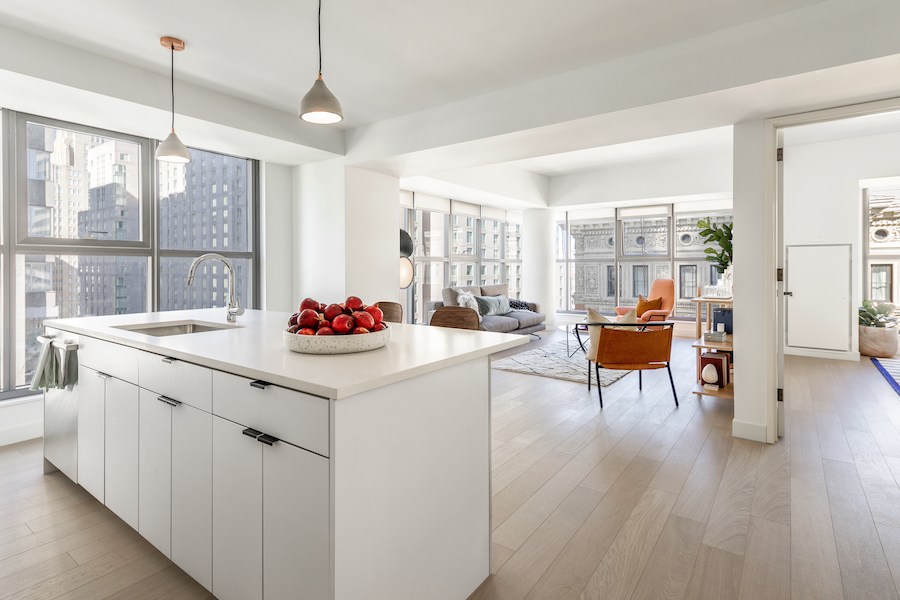 A model one-bedroom apartment in The Girard. | Photos: Courtesy Greystar

Let’s say you’re a developer. And let’s say that you have announced that you will undertake a game-changing development in the heart of a large American city.

And furthermore, let’s say that your first new project in that development is an apartment building with amenities unmatched by any other building in its part of town and only a few others elsewhere in the city.

“So what do you plan to do for an encore?” would seem to me to be a logical follow-up question.

For National Real Estate Development in Philadelphia, The Girard is the answer.

The 23-story tower at the northeast corner of 11th and Market streets is the second of what will ultimately be four new buildings when the six-building East Market development wraps up several years hence. Designed by Morris Adjmi Architects, the building pays homage to its landmark neighbor across 12th Street, the PSFS Building (now the Loews Philadelphia Hotel).

The ROOST Apartment Hotel uses 60 of The Girard’s 240 apartments for its flexible-stay residence on the fourth through eighth floors. The other 180 apartments, on the ninth through 24th floors, building manager Greystar rents to tenants via conventional leases.

Building residents and hotel guests alike have access to the amenities on the building’s third floor.

Where its earlier sibling, The Ludlow, wrapped its third-floor outdoor terrace in the building’s L-shaped arms, The Girard’s two terraces bracket its single tower.

Connecting the two is a lounge and dining room that serves as an indoor-outdoor space. In good weather, the full-height doors that span the two ends of the lounge can be opened to create a passageway between the two terraces. 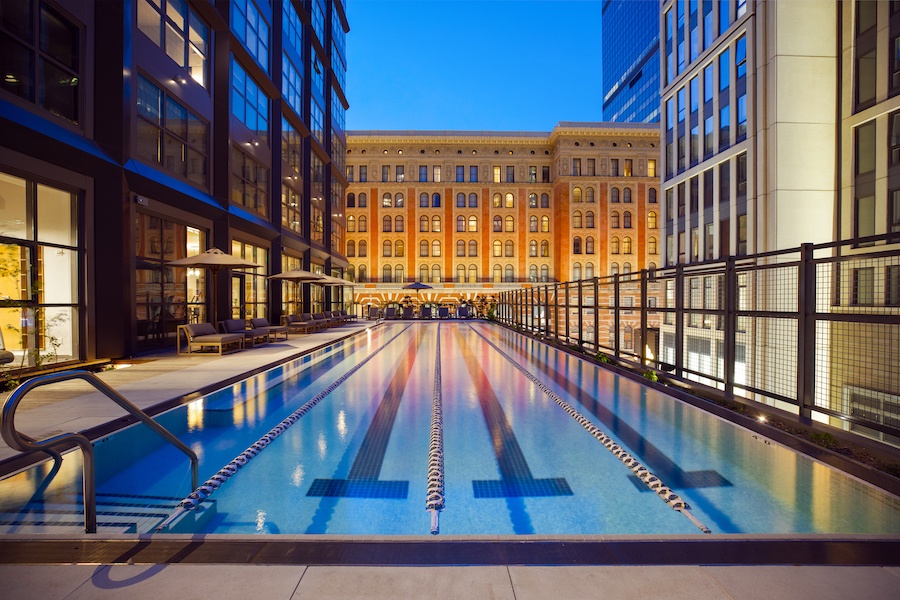 The heated, year-round lap pool on the east terrace

This design also makes the north lounge the “cabana” for the 25-meter-long heated lap pool on the east terrace. A grill and seating area at the pool’s south end allows residents and their guests to enjoy a poolside cookout if they wish. 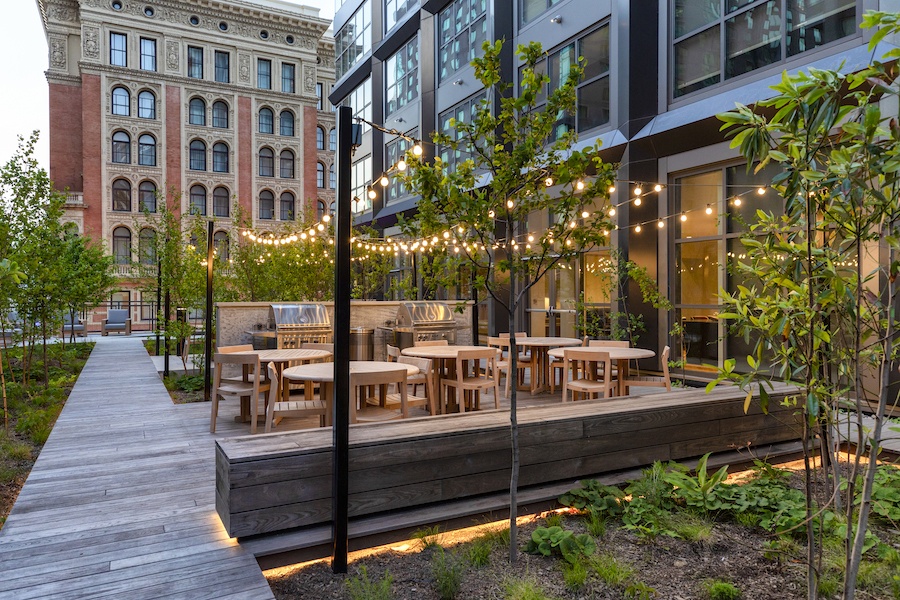 The main outdoor dining area, however, is on the west terrace next to the north lounge. Strings of lights give it a festive appearance. 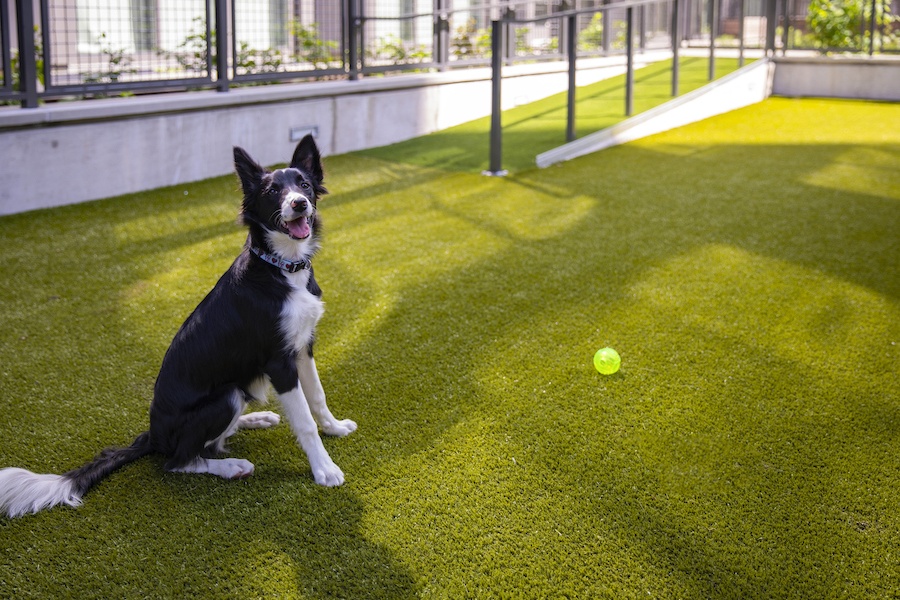 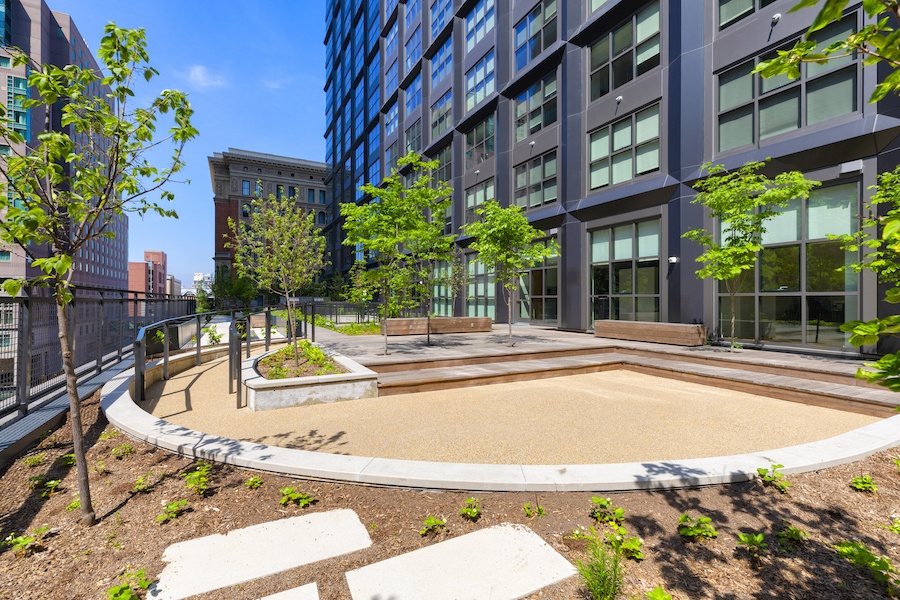 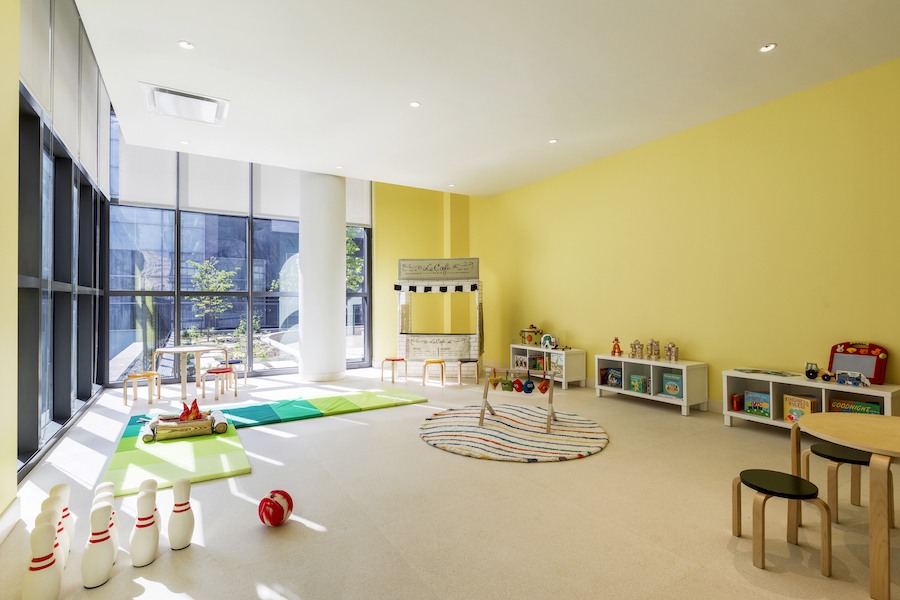 The family- and pet-friendly building also contains a dog run and an outdoor children’s play area on the west terrace. An indoor playroom sits next to the outdoor space.

The amenities inside rival those of the city’s best new luxury apartment buildings. (Then again, they should, for this is one of those buildings.) They include: 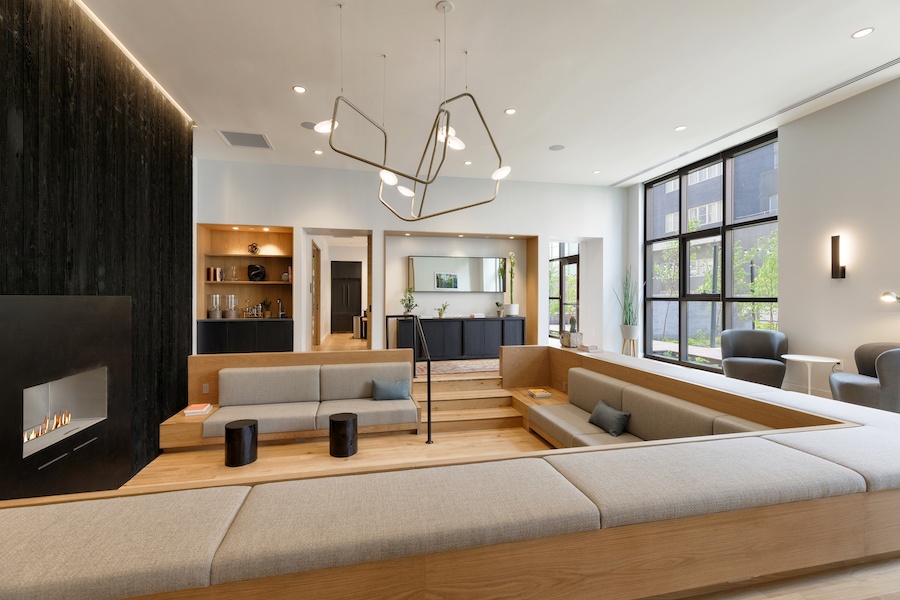 a conversation lounge with fireplace, 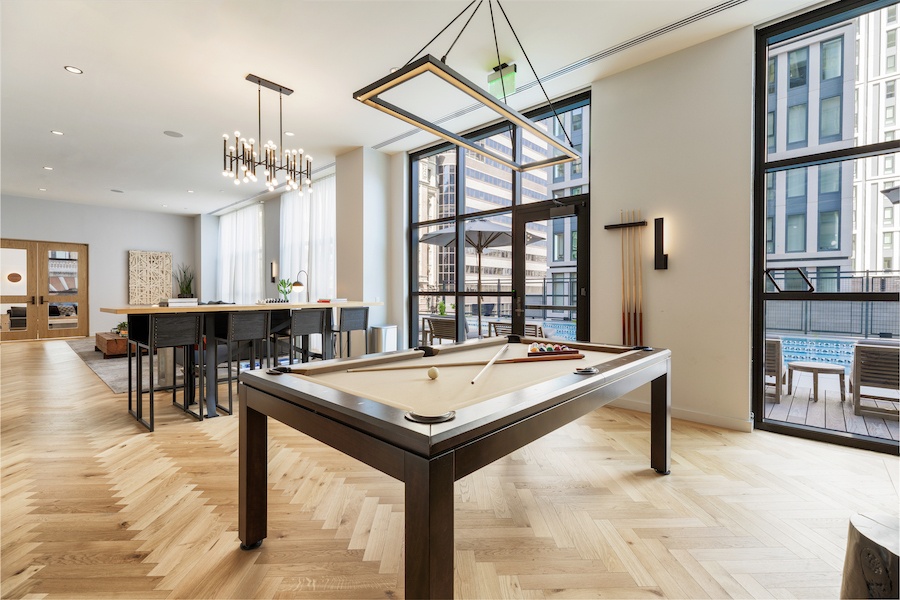 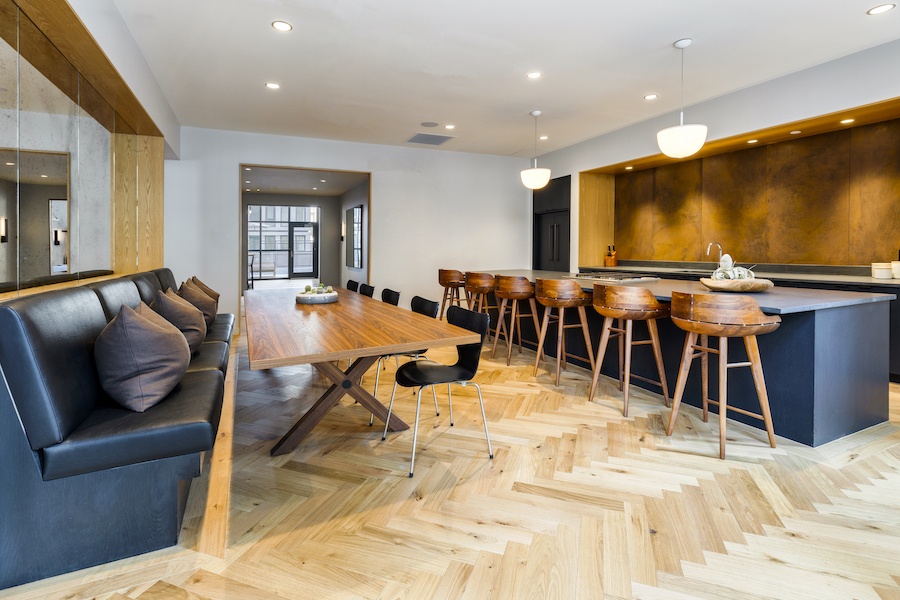 a demonstration kitchen and dining room that residents can book for special events at the rate of $100 per hour, 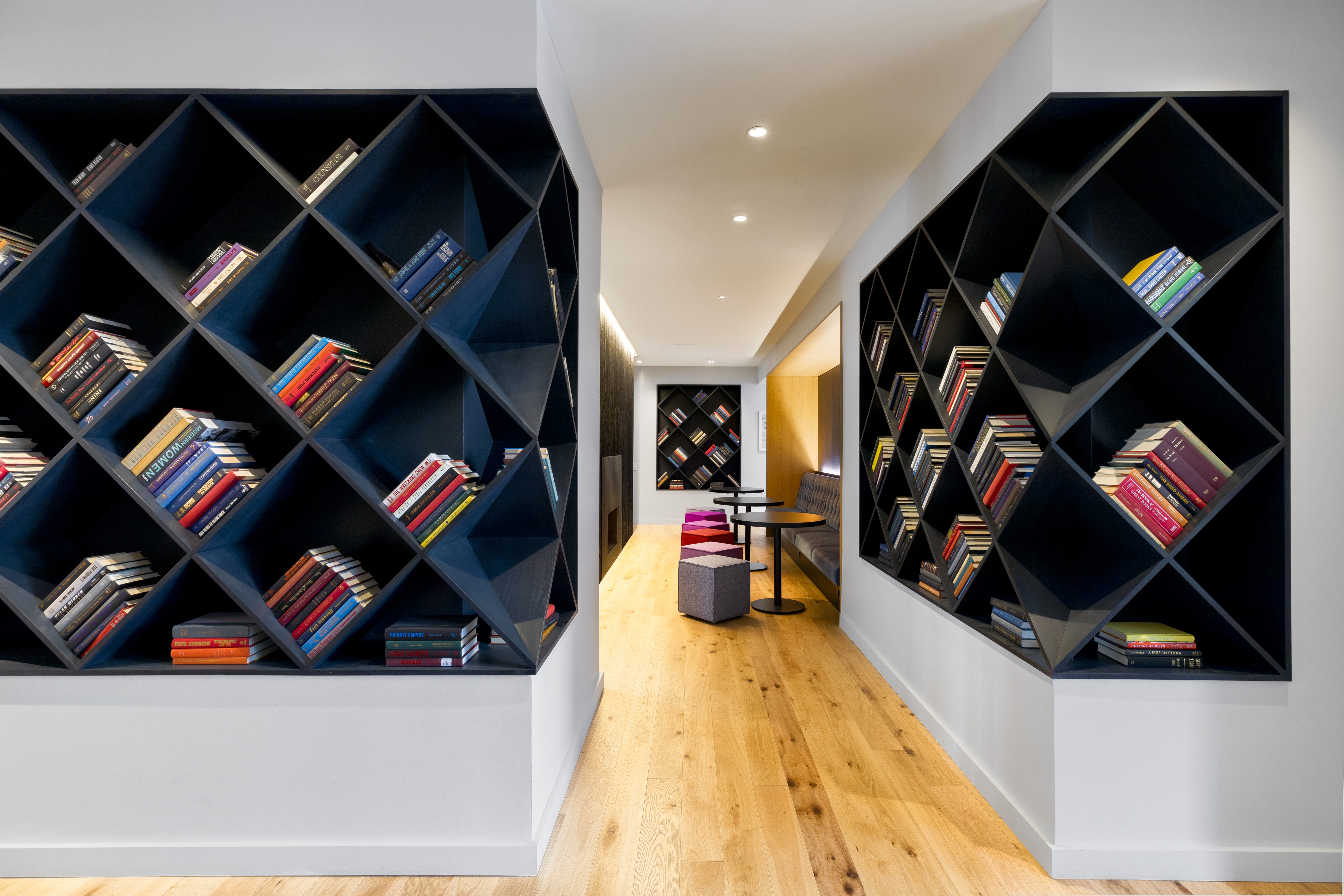 a library stocked with a curated collection of titles that residents and hotel guests can borrow, 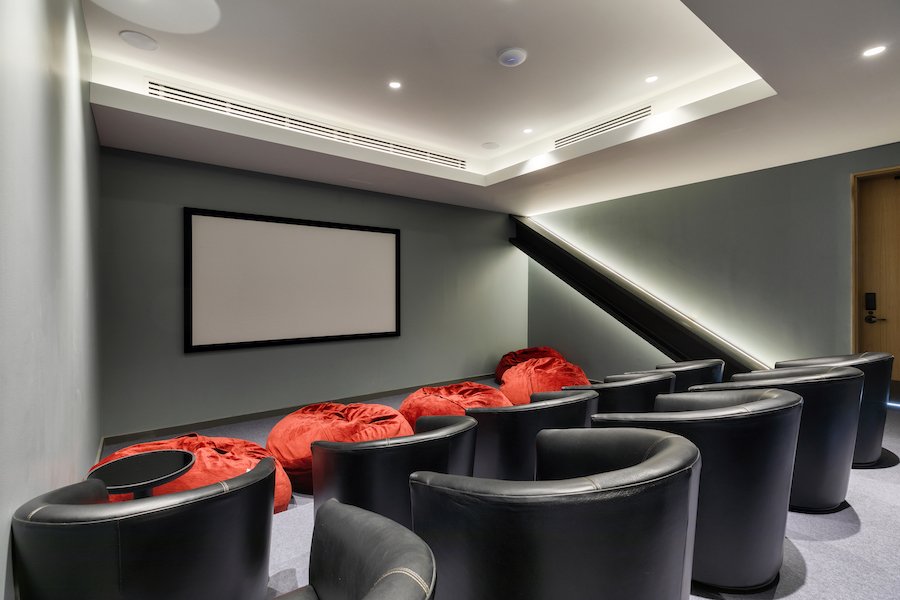 and a screening room with lounge and beanbag chairs. It also has a beverage fridge that residents can fill before they invite friends over for a screening. 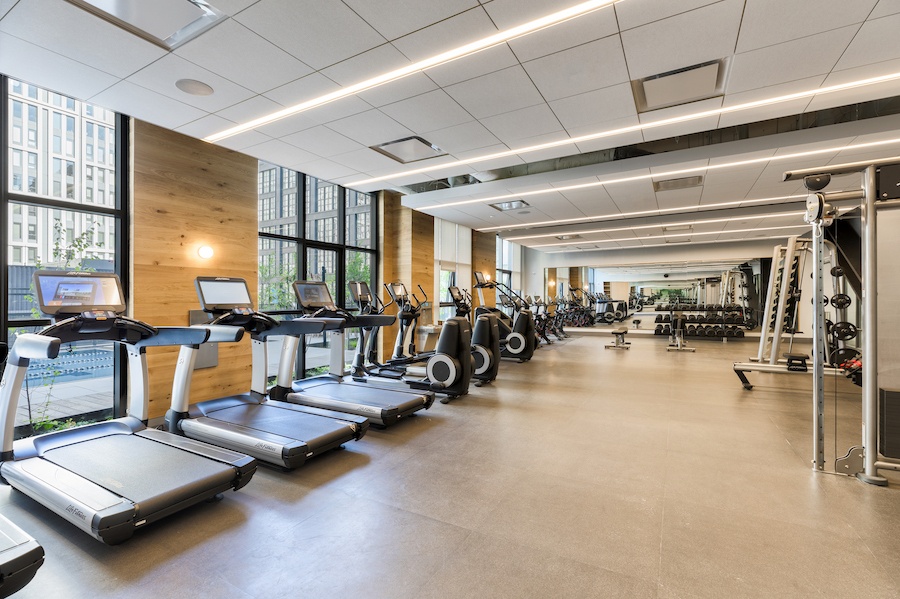 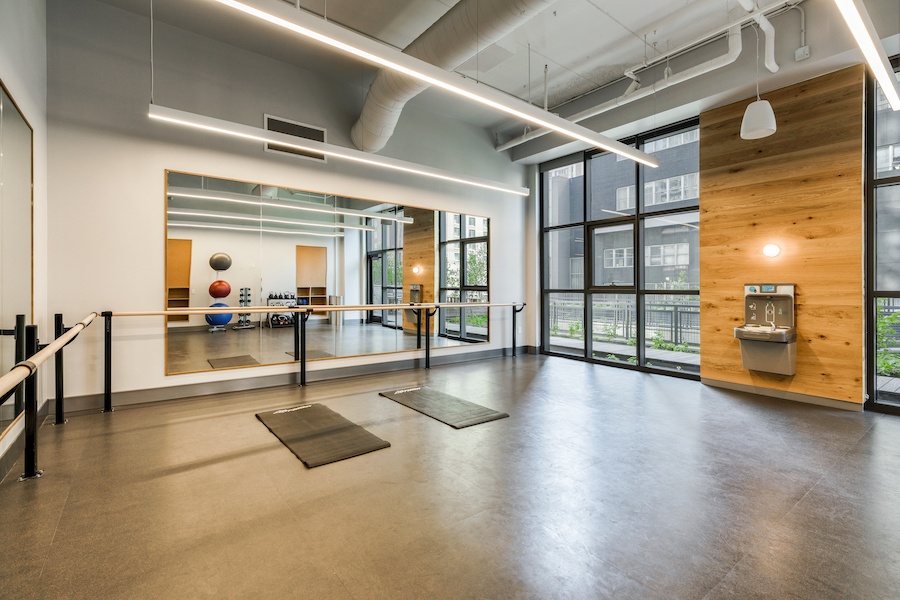 The amenity floor also contains a fitness center and a yoga studio. And if those facilities aren’t enough, residents get a 10 percent discount on memberships at the City Fitness gym, located one floor down with a street entrance on 12th.

“It’s an added incentive for renting in our building,” says Leasing Manager Christopher Llanes. “Our residents do like to go to City Fitness because of the classes.”

Residents also have access to garden plots on the west terrace where they can grow herbs and vegetables. And they can charge their electronic devices at any of several charging stations placed on the terraces. 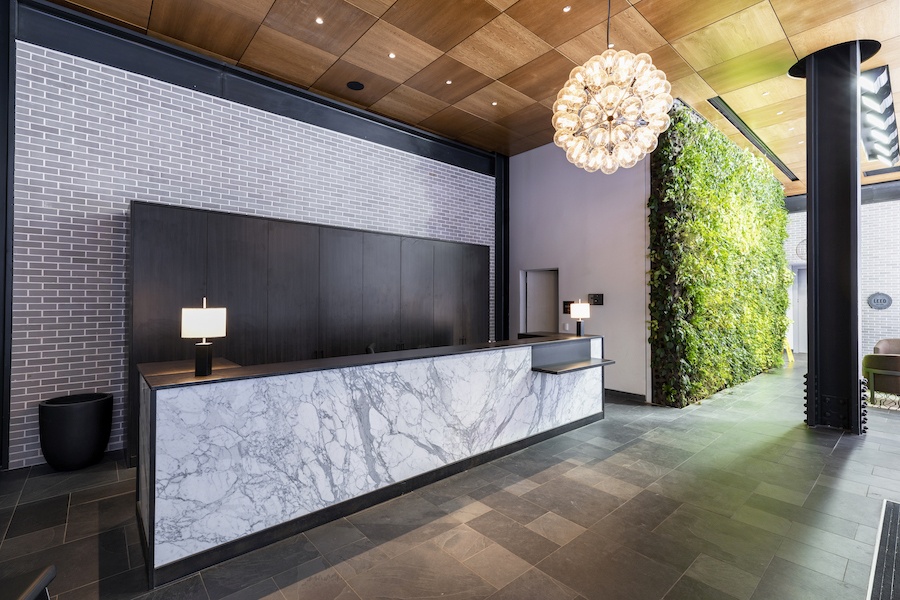 The LEED Silver-certified building has a number of green features besides the terraces and the living wall in the lobby. One of the most notable: two gas-fired micro-turbine generators on its roof.  By generating much of the building’s electricity on site, the turbines reduce operating costs in two ways, one of them rather ingenious.

“In order to cool the turbines, we circulate water through them, and we use some of the heat we extract to heat the pool,” says Charles Norman, development manager for National Real Estate Development. “So we essentially heat the pool for free.” 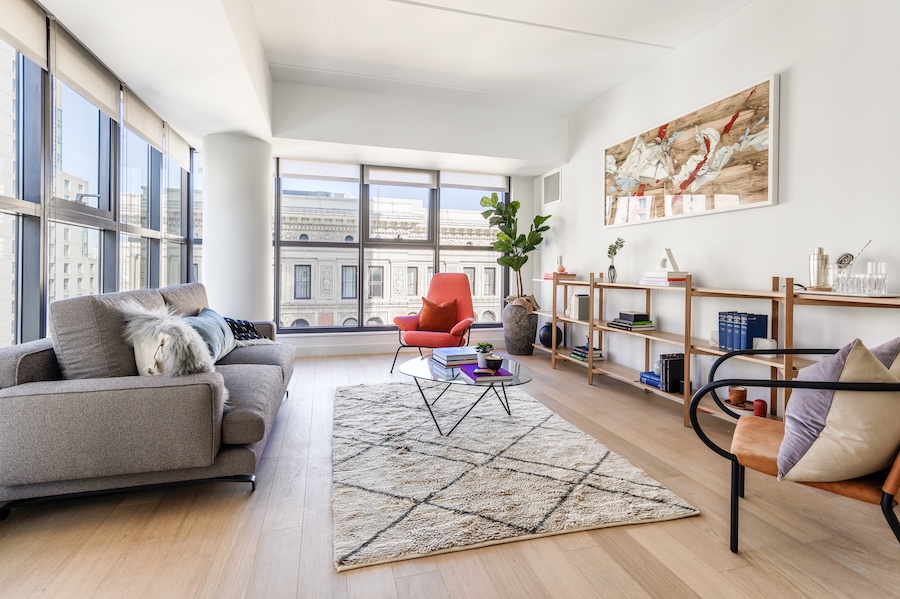 The living room in the model 1-bedroom apartment 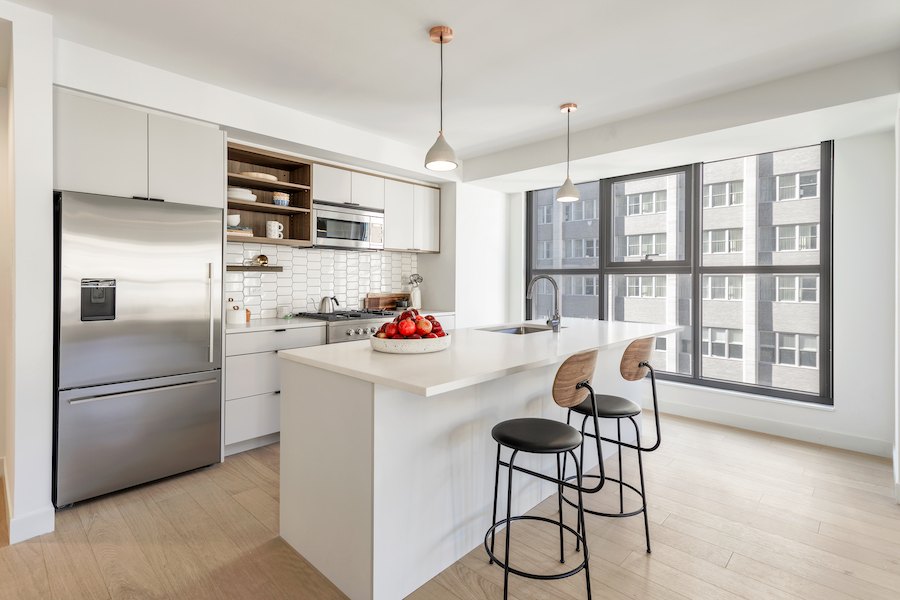 More than the usual level of thought also went into their kitchens, which feature open shelves for commonly used objects and stainless-steel appliances that fit flush with the counters and cabinets. 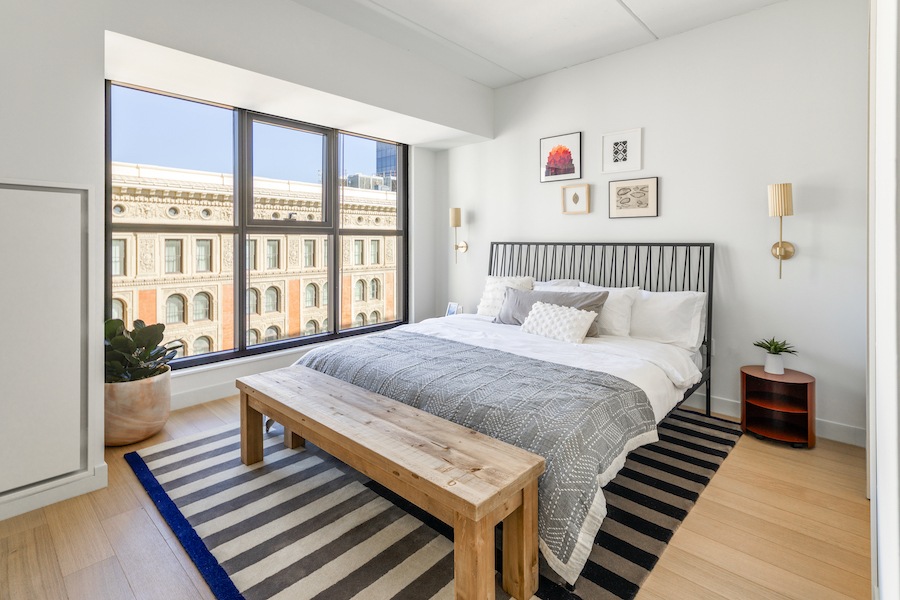 The bedroom in the model apartment

Lauren Soss, regional property manager for Greystar, notes that residents of The Girard can pick and choose from a full calendar of events and activities, including “yappy hours” in the dog run, barbecues for residents and performances in the conversation lounge. 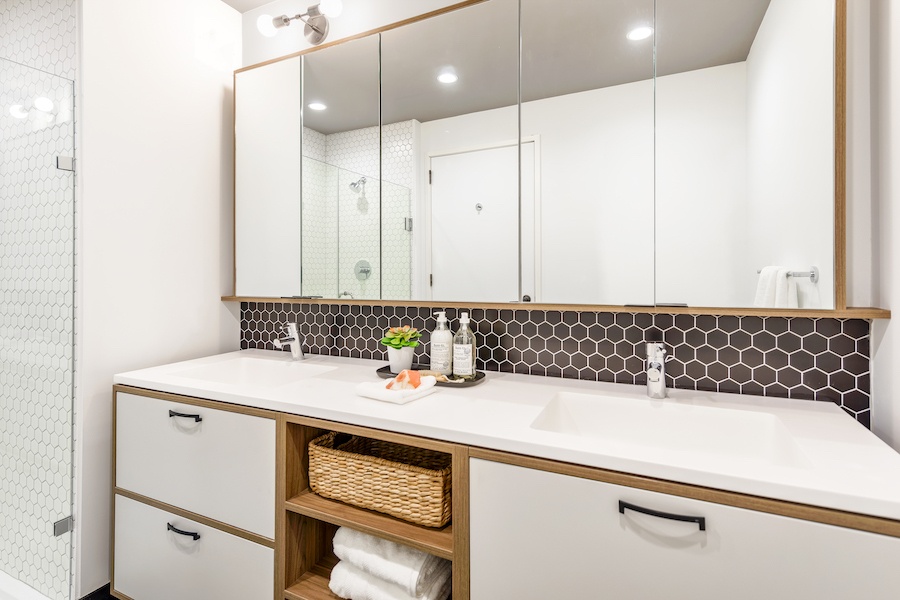 The master bathroom in a model apartment

The activities and amenities together give renters here the kind of community they might find at a suburban garden apartment or condominium complex. “It seems that people moving to the city want to have a particular lifestyle,” Soss says. “And even if they’re sacrificing space by renting an apartment versus buying a house, they’re still able to have their garden, host a dinner party, or have a holiday event, all while living in an apartment.”

As of now, the building is about half leased, including 25 percent of the suites in Roost. Soss and Llanes estimate that about half the tenants moved from somewhere else in Philadelphia and half from the suburbs or points beyond, especially New York City.

But Soss also notes another, more specific place some of the new residents have moved from: The building next door, which Greystar also manages for National Development. “We found that some residents who moved to The Ludlow last year love the area, they love the neighborhood and everything it’s become. And when their leases expire, they have opted to move to The Girard because they want to try something different without sacrificing the retail and other attractions of the neighborhood.”

Including, of course, the growing number of shops and restaurants on the East Market buildings’ street floors.

The Girard by the Numbers

Number of units: 240 one- and two-bedroom apartments, ranging in size from 545 to 1,238 square feet. Roost runs a flexible-stay apartment hotel in 60 of the apartments on the lowest five apartment floors.

Number of parking spaces: 186, in an underground public parking garage; none of the garage spaces are dedicated for tenant use.

Pet policy: Pets welcome with a $350 one-time fee plus $35 monthly rent per pet. Some breed and weight restrictions apply.