Post Brothers turns a former storage warehouse into apartments for the postgraduate set. 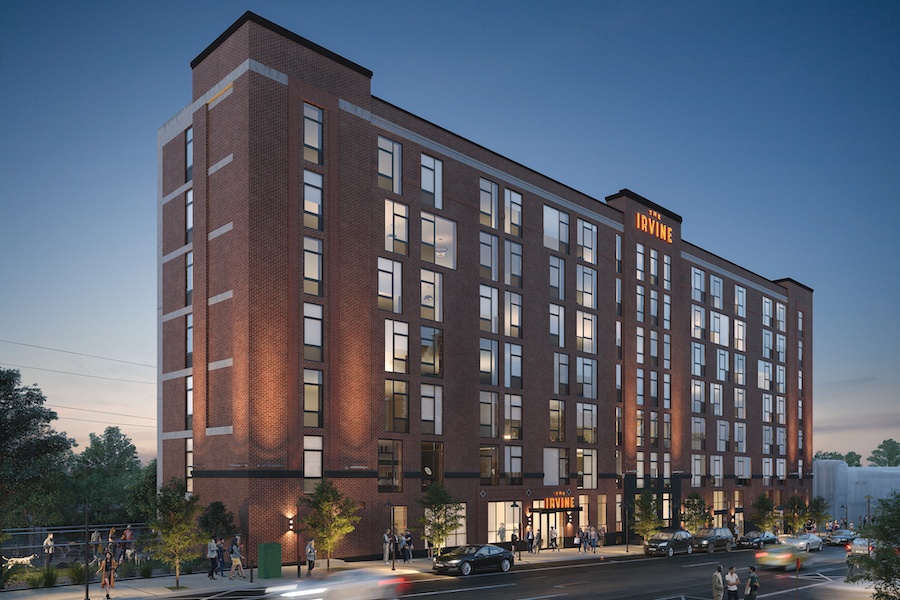 Rendering of the Irvine | Photos and renderings: Post Brothers unless otherwise noted

How do you think the cast of “Friends” would live if they had all gone on to college before rooming together? And followed that up with living in graduate student housing?

The company has turned the former Apple Storage warehouse on 52nd Street, a block and a half south of Baltimore Avenue, into a stylish apartment building with a graduate-dorm feel.

Or rather, what a graduate dorm might feel like if it had industrial-chic style, luxurious amenities and kitchens you can actually cook in. 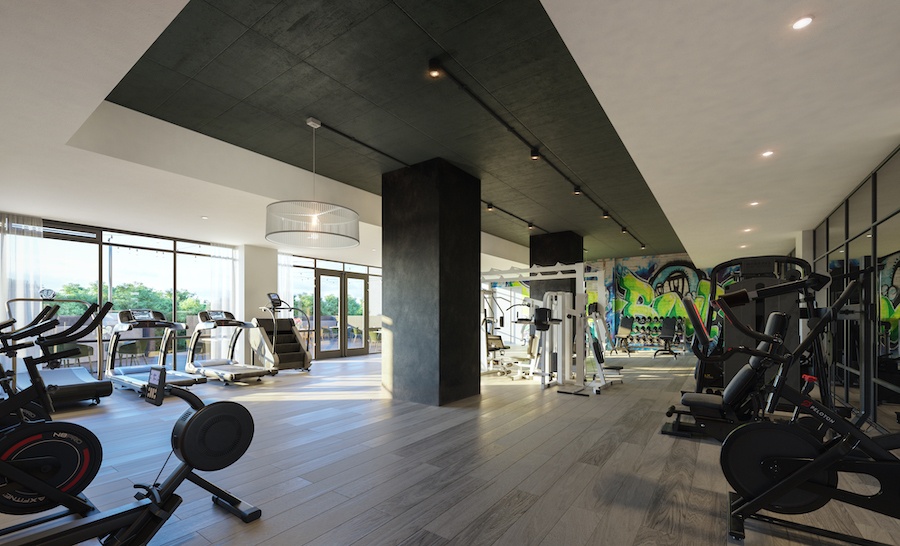 Fitness center; building graffiti reproduced on the wall at the far end

Oh, and graffiti-filled walls here and there.

“The building was originally designed for storage,” says Post Brothers Asset Manager Josh Guelbart. “And then it sat vacant for 15 years, and people started painting really cool graffiti” on its walls.

“We kept it where we could,” mainly in the fire stair towers and some of the common spaces. “We took high-resolution photos of some really cool pieces we unfortunately had to remove to build the building. And we’re printing them to go inside the elevators.”

Most of the graffiti had to go in order for Post Brothers to insert huge windows in the virtually windowless building. On the inside, the energy-efficient windows flood the individual apartments with light and offer great views, while on the outside, they give the exterior a syncopated rhythm that recalls a Piet Mondrian painting. 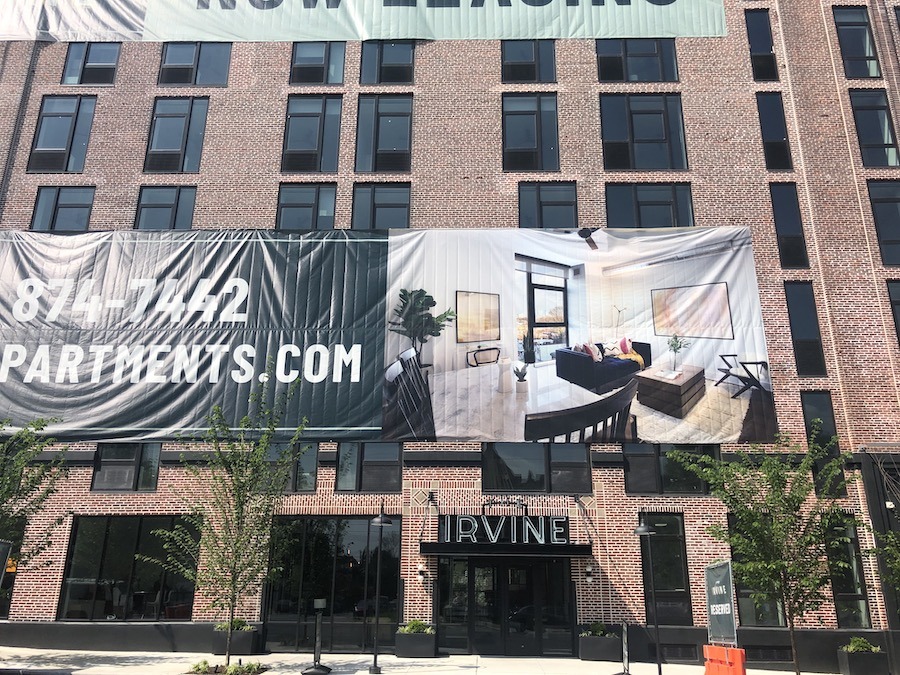 Another prominent design element the building features is neon. A large neon sign sits atop the canopy over the building’s street entrance, another one will grace its roof parapet, and large neon numbers — not yet installed when I toured the building at the end of May — will grace each floor’s elevator lobby. 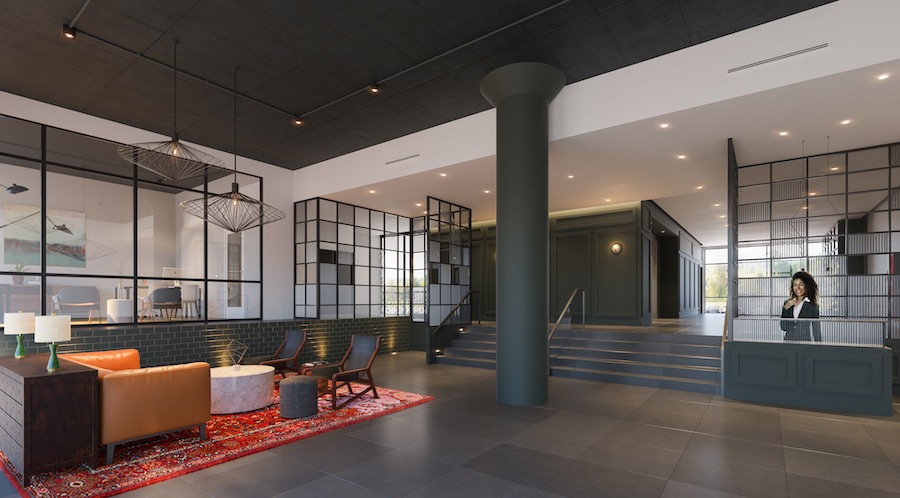 In terms of how management expects tenants will use the building, “Friends” also serves as the template, only on a larger scale and with more polish. The street lobby features ribbed-glass multi-paned steel-frame windows to create the same sort of industrial loft ambiance that “Friends” apartment had, for instance, but the furnishings and lighting are anything but secondhand. 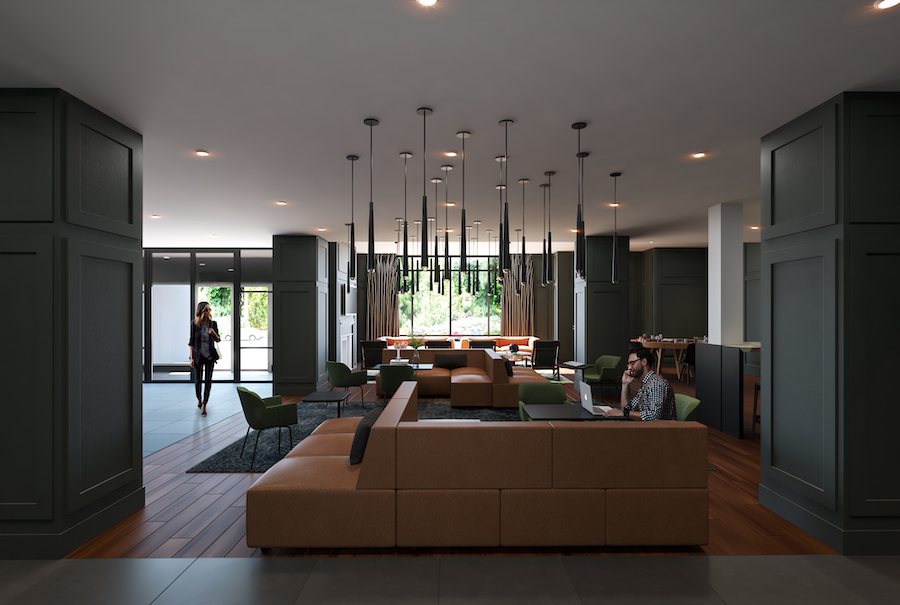 The real friend spaces are found on the lower-level amenity floor. A second lobby lets tenants enter from the 70-car parking lot behind part of the building; a lounge off that lobby contains fireplaces, collaborative workspaces, game tables and a kitchen residents can use to host larger events. The aim here, Guelbart says, is to combine the ambiance of a cool coffee shop and a communal living room — the aesthetic Starbucks stores seek to emulate with a little less warmth. 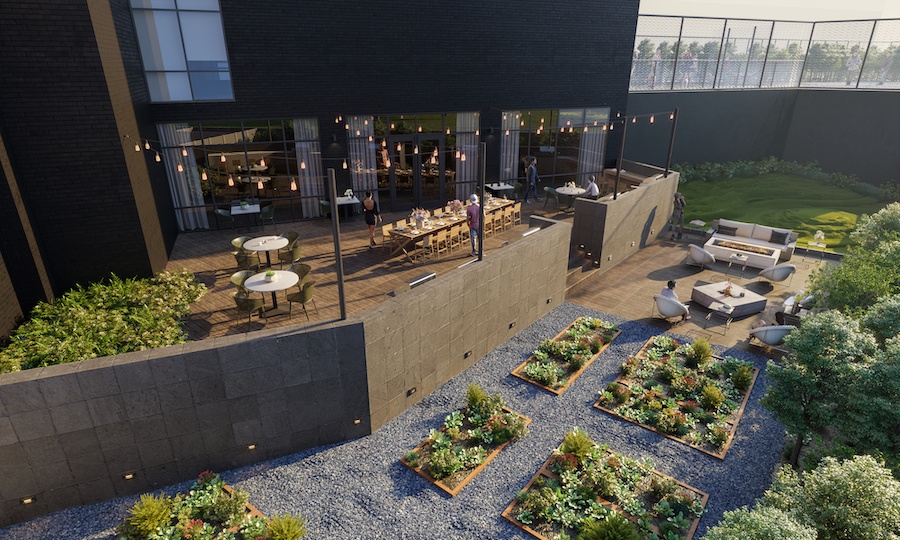 A second living room and kitchen sit outside the state-of-the-art fitness center (another of those graffiti-walled spaces, in this case a reproduction of art Post Brothers had to cover over).

This outdoor gathering space features grilling stations, a large dining table, and raised berms that double as chaise lounges of sorts. A small dog park here complements the larger fenced-in one off the first floor. Residents will also be able to grow flowers, herbs and vegetables in the outdoor terrace’s raised planting beds. 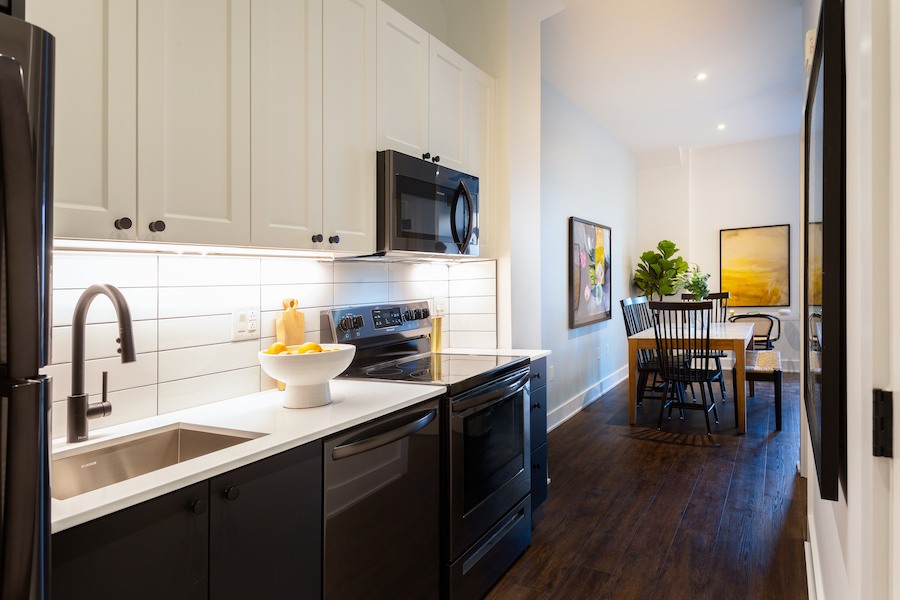 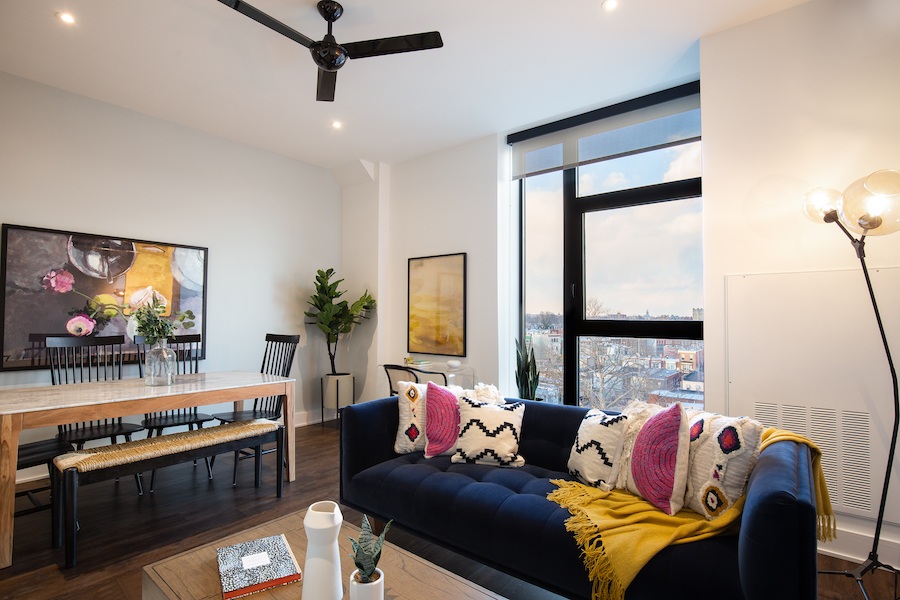 The large communal spaces give residents of the compact studio and one-bedroom apartments places to relax, socialize, and even make new friends. “People seem to like living by themselves and having a communal space,” says Guelbart. 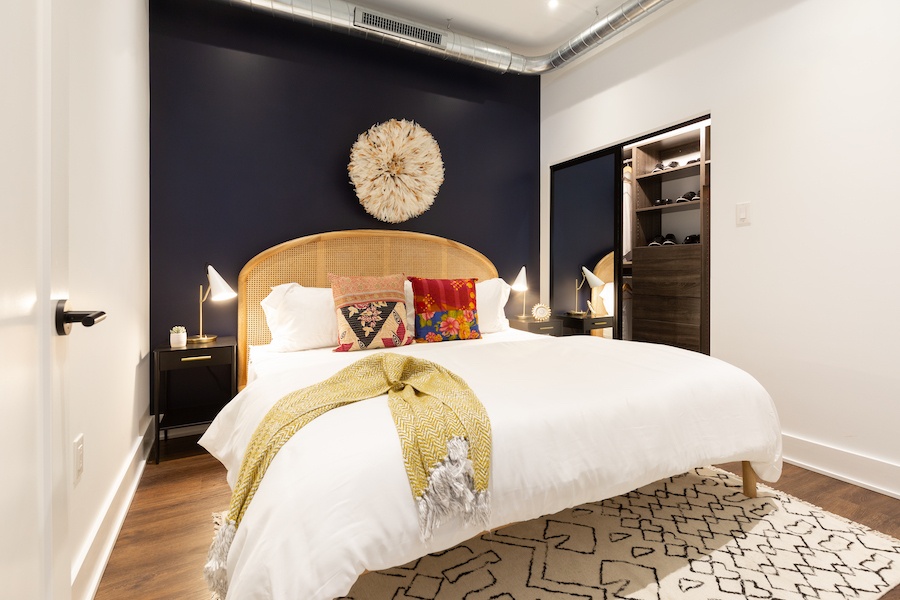 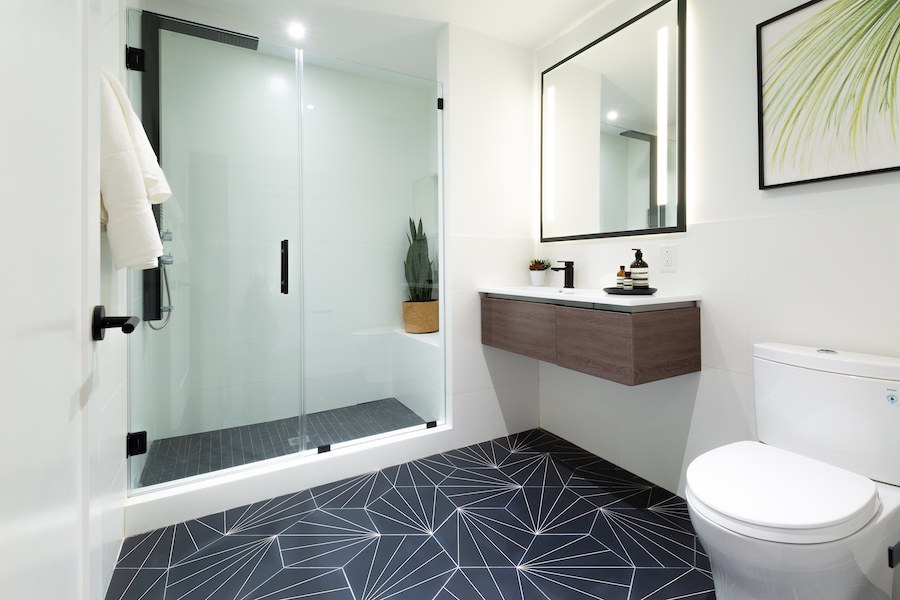 Residents of the larger two- and three-bedroom apartments get some communal space of their own in the centrally located living/dining rooms. Guelbart says these apartments were designed this way because Post Brothers envisioned their occupants living more like roommates than like a nuclear family.

(While Guelbart may be right about younger renters’ preferences, it’s worth noting that the five one-bedroom “townhouses” on the first floor all got snapped up quickly. These units, which were still little more than framing and plumbing on my visit, have their own private street entrances and rear terraces. They also match the three-bedroom units in total interior space.) 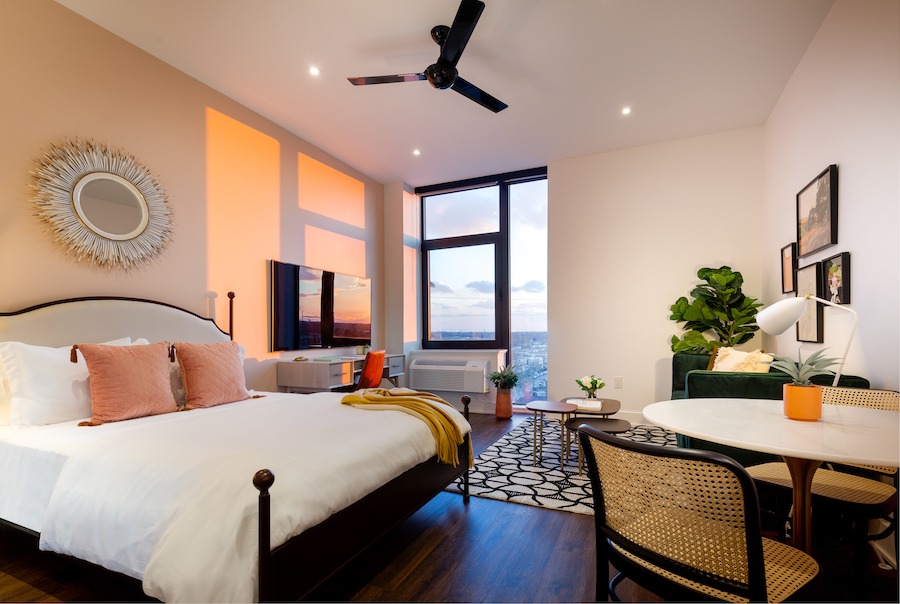 And while the studio and one-bedroom apartments don’t offer this kind of space, they don’t feel cramped either thanks to their efficient layouts.

Other amenities include a concierge from 3 p.m. to 9 a.m., package delivery lockers and on-site laundry and cleaning pickup by Tide Cleaners. (Procter & Gamble, the makers of Tide detergent, bought Pressbox, the company that pioneered on-site cleaning pickup and dropoff lockers, as a logical brand extension.)

As for the building’s name: Even though it’s targeted at the postgraduate set, it has no connection to the auditorium on the University of Pennsylvania campus two miles to the northeast. “We were thinking of going west,” following the path of development out Baltimore Avenue, “and we thought about Irvine,” the master-planned community outside Los Angeles, Guelbart said.

And where Post Brothers has gone, others are following, he added. “People are building new houses, and they’re selling for $250,000 to $350,000,” he said about the blocks surrounding this building. “That used to not happen south of Baltimore Avenue.”

The Irvine by the Numbers

Number of parking spaces: 70. The building also has 200 indoor bike storage spaces and a bike repair bay. “People in this neighborhood don’t really drive unless they have to. They really bike and take public transportation,” says Guelbart.