This former factory had already been converted to apartments when Arts & Crafts Holdings got its hands on it and recrafted it. 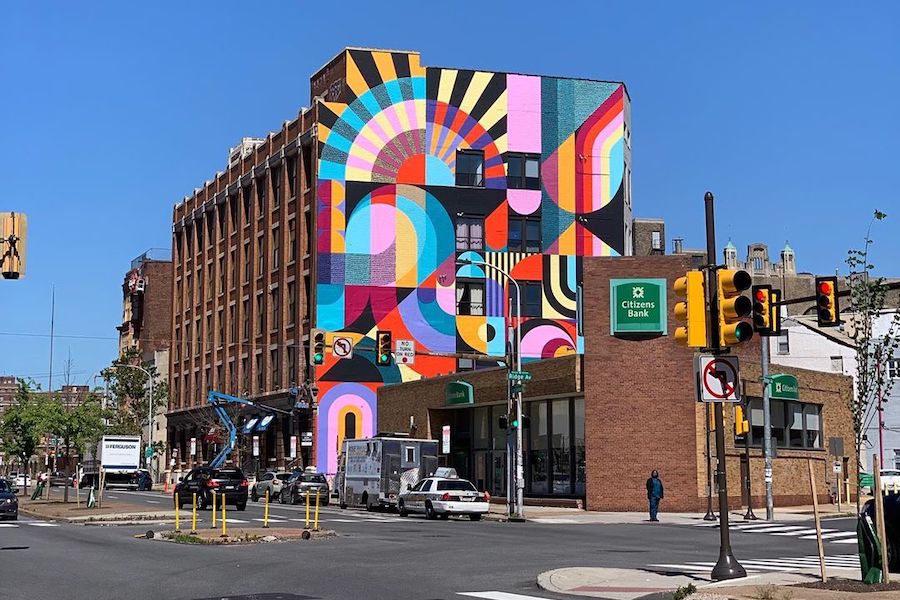 Callowhill is what the planners call it.

Real estate agents, or at least many of them, like the Loft District.

Other agents prefer Spring Arts, and the more creative types have dubbed it the Eraserhood.

By the time one real estate developer is done fixing it up, however, we may be calling it the “Arts & Crafts District.”

The recycler of industrial buildings has been steadily acquiring properties throughout this area, with a focus on Spring Garden Street itself. Its chief aim: to turn the thoroughfare and its environs into prime territory for artists, craftspeople, makers and other creative folks to plant roots and grow businesses. (Put this firm in the “Spring Arts” camp, for what it’s worth.) 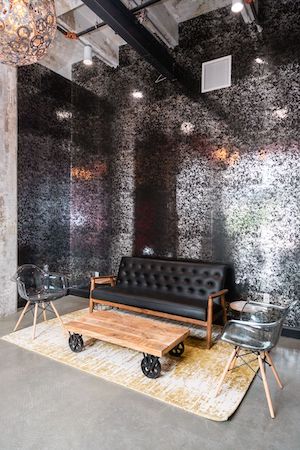 “We’ve been rehabilitating, reimagining and repositioning what these turn-of-the-century buildings can be,” says Craig Grossman, general partner of Arts & Crafts along with Aaron Cohen. “We’ve beem adding color, flavor and texture to these buildings, activating them with food and beverages, makers and other activities, shining a spotlight on this neighborhood. Creating place and community is a big part of what we do.”

But Arts & Crafts hasn’t neglected the “live” part of the live-work-play triad either. In addition to managing some residential properties on the blocks north of Spring Garden Street, the company also owns two apartment buildings in the district.

The building at 1217 Spring Garden St. is their newest acquisition, joining an earlier conversion it performed on 1026 Ridge Ave.

This five-story building, the first reinforced concrete structure in the city, began life towards the end of the 19th century as the home of the Bilgram Machine Works. A previous owner had converted its upper floors to apartments; Arts & Crafts acquired it last year and pressed its reset button.

“Every building has its own DNA,” says Grossman. “We like to dig into the history of a building and discover what was there, and that gives us an aesthetic direction.” 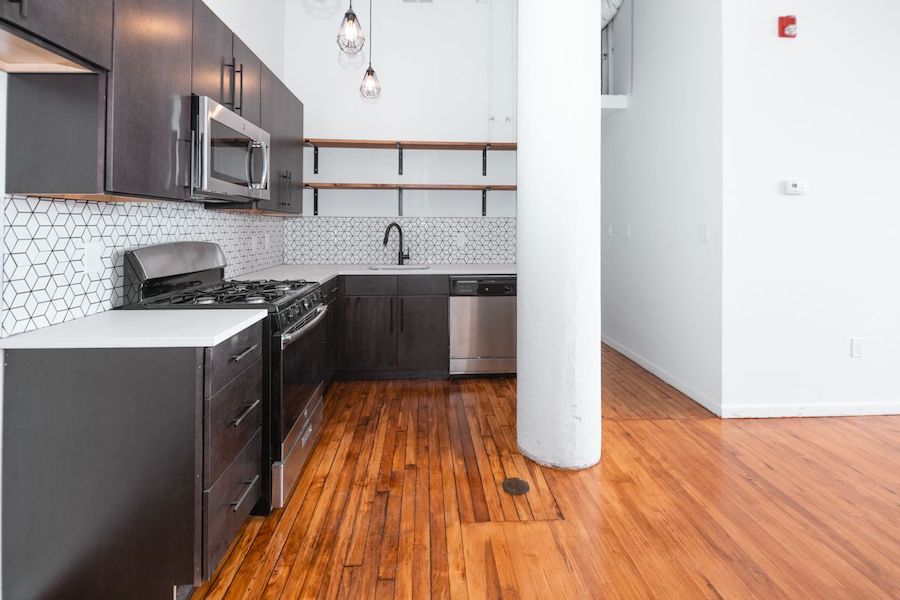 Kitchens, like this one in Apt. 504, have modern appliances and shelves in addition to cabinet space

In this case, the direction was towards the industrial loft style. “This building has beautiful concrete mushroom columns, concrete floors and big industrial windows” — a totally different aesthetic from the mid-19th-century commercial vibe of the Ridge Avenue building.

Grossman figured, Why mess up a good thing? “We didn’t change the layouts; the units were what they were,” he says. “We just gave them a facelift. It was more aesthetic improvements: updating the materials, new appliances, updated finishes. We made them more exciting to live in.” 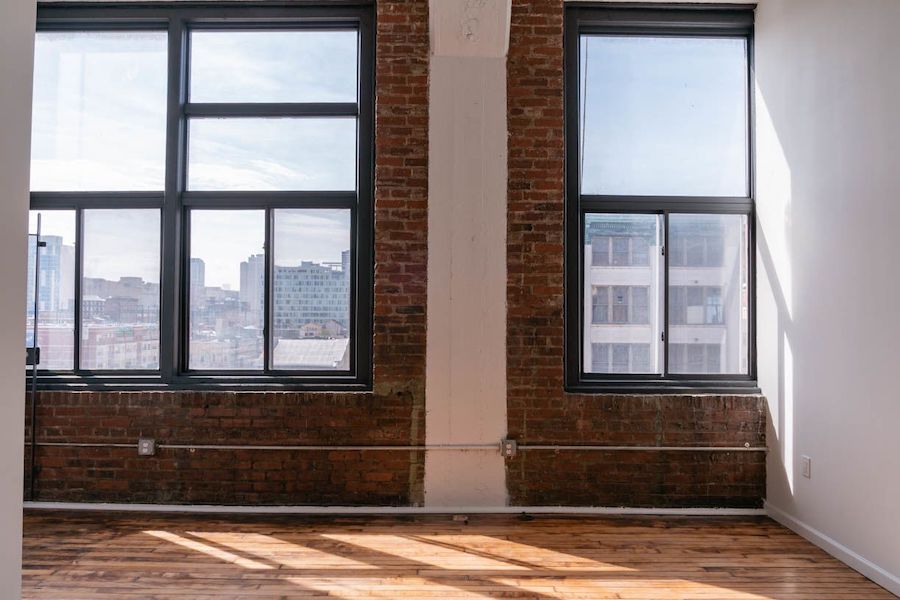 Large windows let in lots of light and offer great views to the south. This view is from Apt. 409.

They also upgraded a number of the building’s common features too. In addition to bringing the building back to good working order, Arts & Crafts installed a new elevator in the former freight elevator shaft and brought the building into compliance with the Americans with Disabilities Act. It gave the lobby a total makeover designed to both pay homage to the building’s 19th-century industrial past and add some 21st-century gloss. 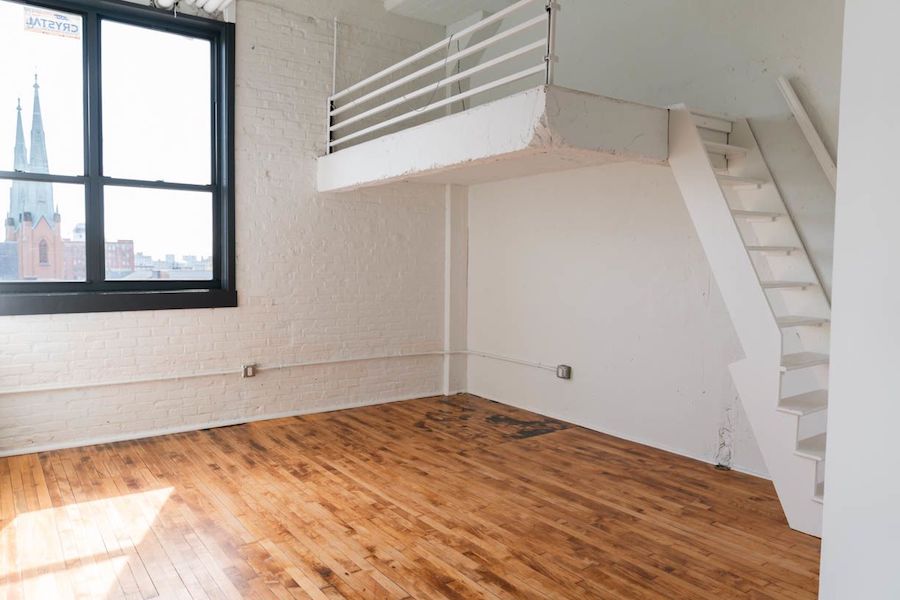 All the main living spaces have hardwood floors; bedrooms are carpeted. Some of the units have extra personality in the form of elements like this loft in Apt. 508

It also has a new work of art on its east side: a new mural by artists Jessie and Katey that give the building a stronger presence at the 12th and Spring Garden intersection.

Besides the structure itself, Arts & Crafts left one other thing alone: its street-floor tenant. The building remains the home of Bebashi – Transition to Hope, the second-oldest AIDS services organization in the Philadelphia region and the first in the country run by African-Americans. “We made a commitment to them,” says Grossman.

1217 Spring Garden St. by the Numbers

Number of parking spaces: 21; 10 additional spaces are slated to be added in the future. The building also has a bike storage room.

Pet policy: Cats and dogs welcome with no restrictions. Additional $25 per month rent per pet.

Rents: Rents range from $1,200 to $2,200 per month. The management is currently offering free rent for the first month.