The Community College of Philadelphia gets its first "dormitory." That word, however, doesn't do this building justice. 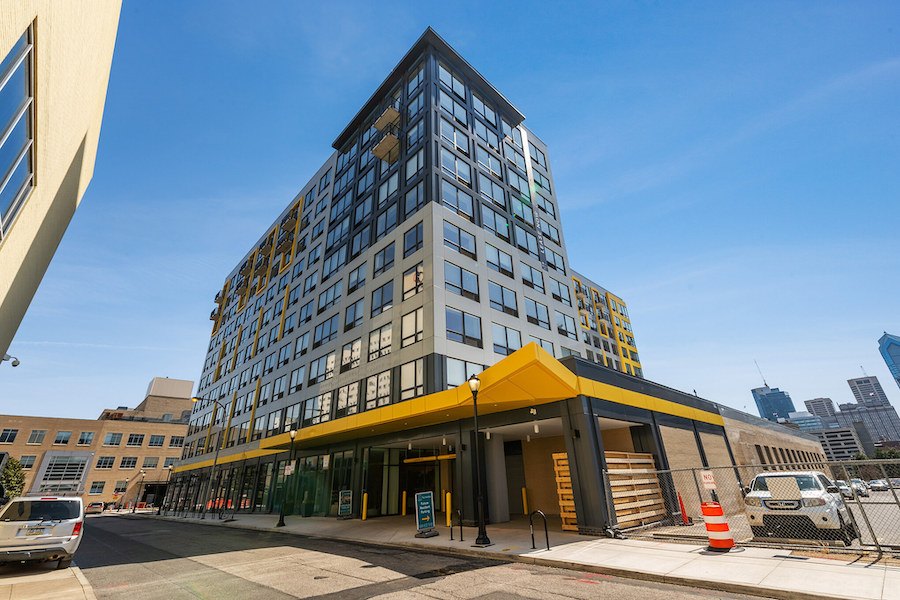 Community colleges across the country — well, the Community College of Philadelphia, at least — have identified a potential growth market and source of revenue:

Why would someone from, say, Indonesia travel to Philadelphia to study at a two-year college? For many of the same reasons students from Philadelphia study at it: They can get a good education for far less than it would cost for two years at a four-year school, and their associate’s degree course credits can carry over to a bachelor’s degree program.

But the college faced a hitch in pursuing this market: CCP is a commuter school. Where were these students from abroad going to live?

Apartment Profile: A First Look at The Kelly

The firm, which specializes in working with educational and healthcare institutions to develop land they own, entered into a partnership with the college to build an apartment building on land CCP purchased from the School District of Philadelphia, whose headquarters building once housed the presses of  The Philadelphia Inquirer and Daily News.

RPG demolished the upper part of the former newsprint storage building and newspaper delivery truck garage and put a 279-unit apartment building on top of what was left.

The Hamilton aims itself squarely at college students and recent graduates. Its apartments are small in square footage terms, but the building they’re in is rich in amenities.

RPG CEO Dave Yeager explains that the design of the amenity spaces is meant to pay homage to the site’s industrial past. “The floors, while new, are concrete,” he says, and the plumbing and ductwork in the ceiling are left exposed. 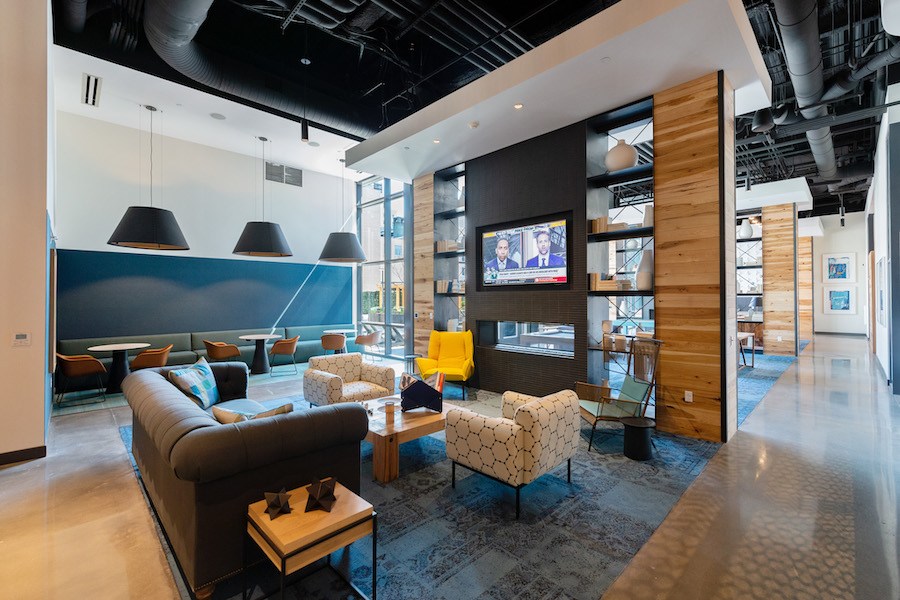 Project architect MY Architecture, founded by former BLT Architects principal Michael Ytterberg, also took advantage of the staggered garage floors of the partly demolished building to produce a residents’ lounge of unusual spaciousness thanks to its 25-foot-high ceilings. 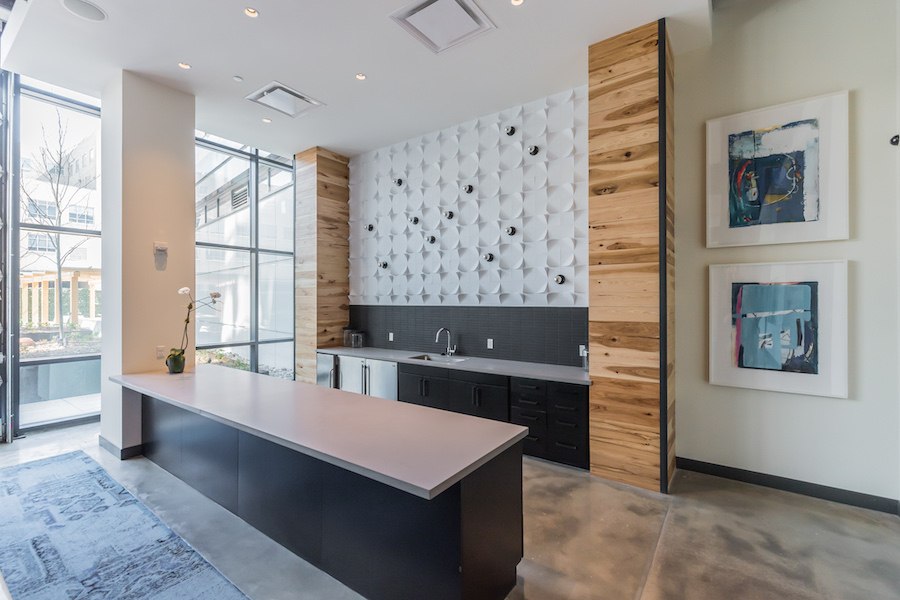 The lounge features four distinct areas: a video lounge, a game room, a kitchen, a communal study/dining table and an alcove filled with study/dining booths and meeting rooms, including a private viewing room that groups can book. 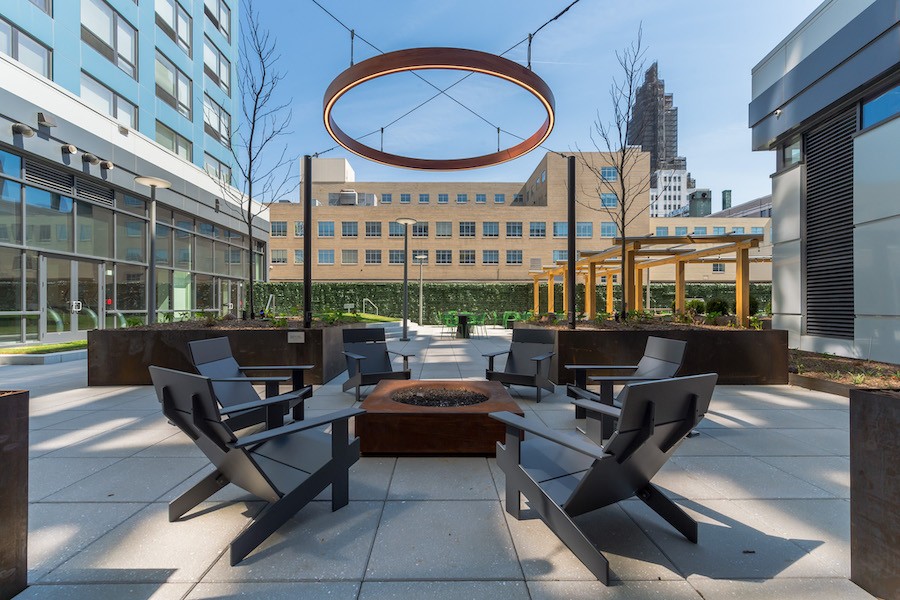 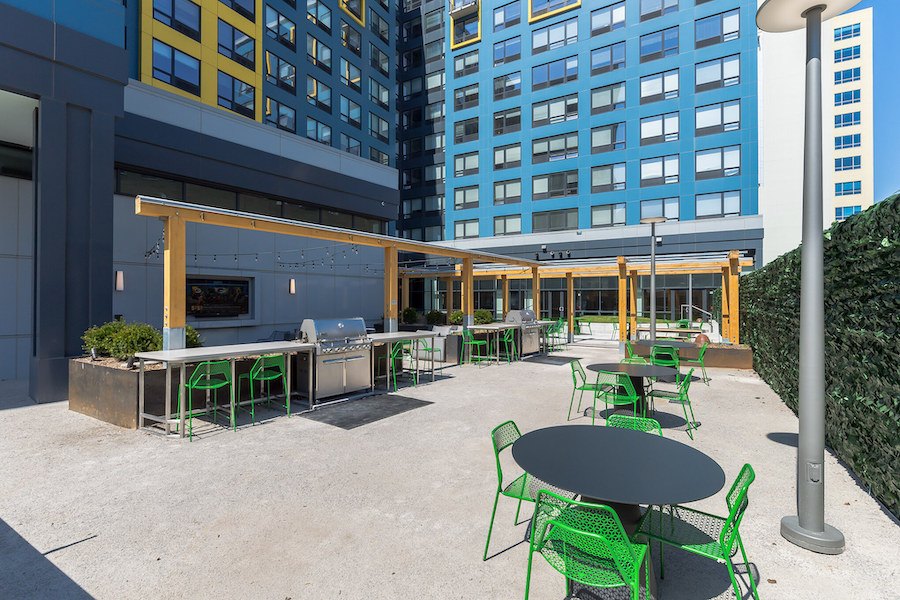 The lounge, game room, kitchen and fitness center all look out on a landscaped central courtyard. The courtyard features a fire pit and a beer-garden-style outdoor dining and game area with grills and a big-screen TV. 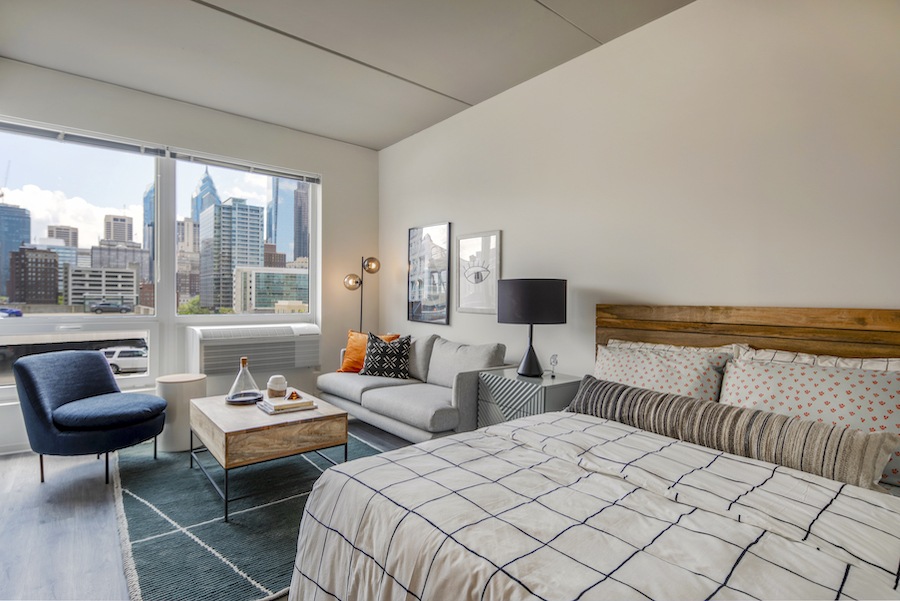 Model studio apartment. “I wish I had more of these,” Yeager says. “They’re flying off the shelves.”

The apartments themselves, even the larger ones, are models of efficiency. The Crate and Barrel-designed islands in the smaller apartment kitchens, for instance, come mounted on wheels that let tenants move them out of the way for more space for other things when they want it. And all the apartments have gear walls where tenants can hang objects. 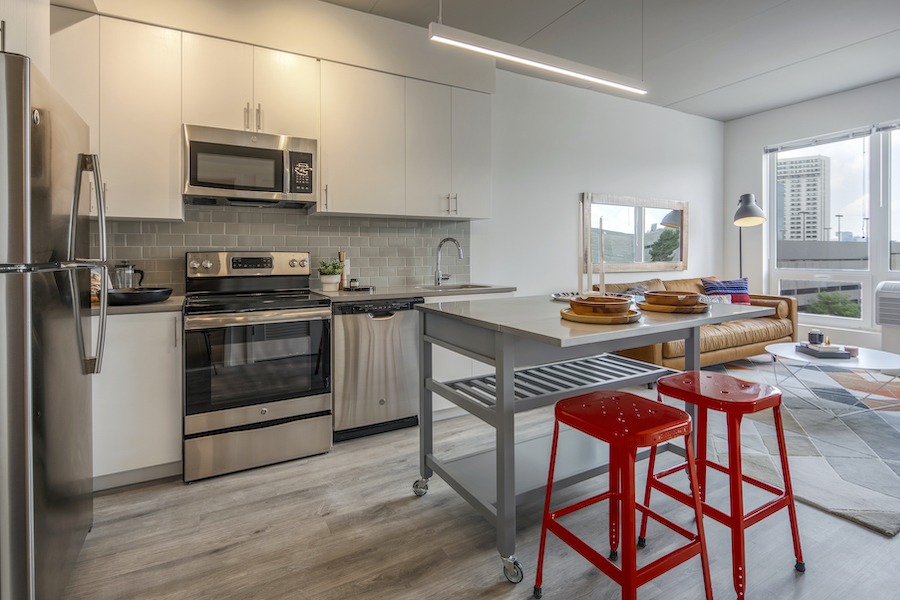 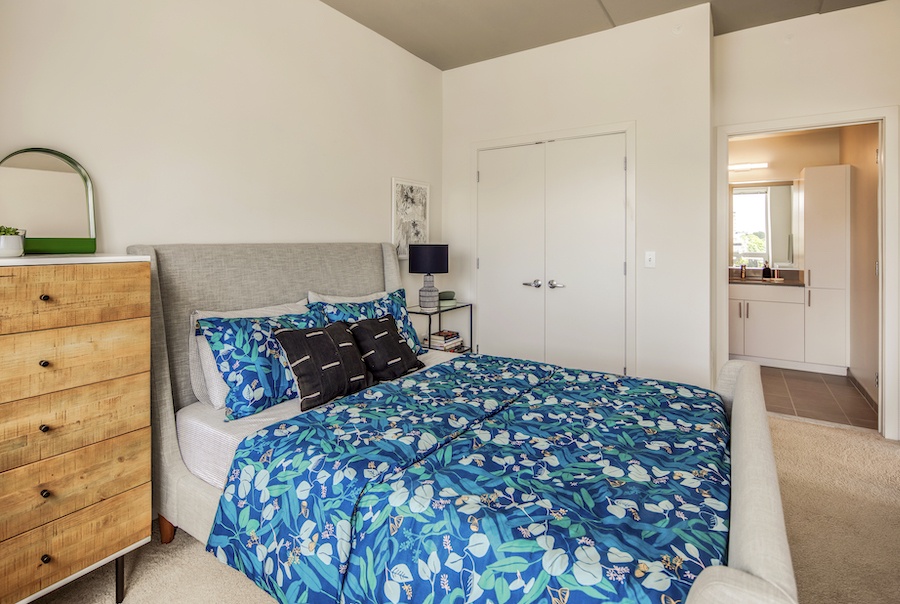 Bedroom in model 1-bedroom apartment. The bedrooms are all large enough to accommodate queen-sized beds, and some can handle king-sized ones

They’re also designed to let the sunshine and views in thanks to their windows, which stretch nearly the full nine-foot height of the units. (On the top floor, the ceilings are 12 feet high.) 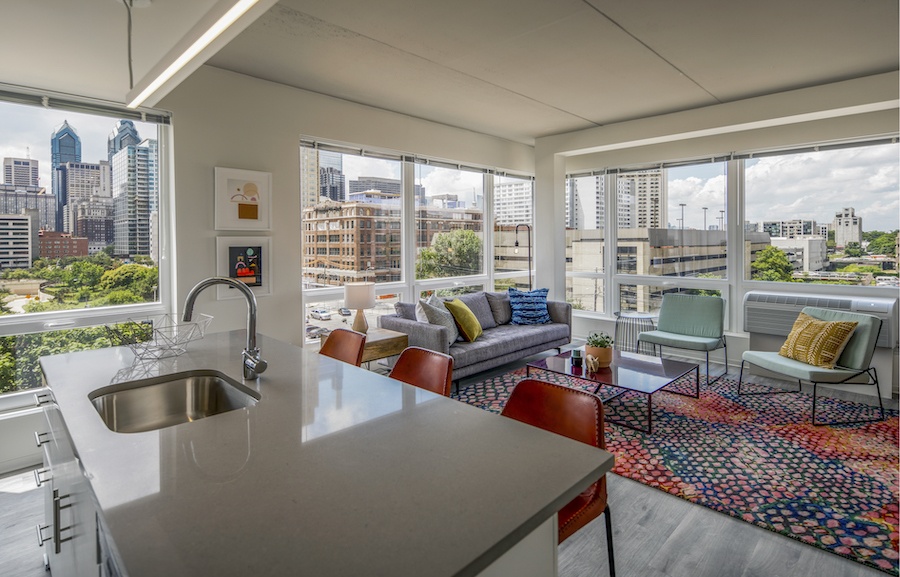 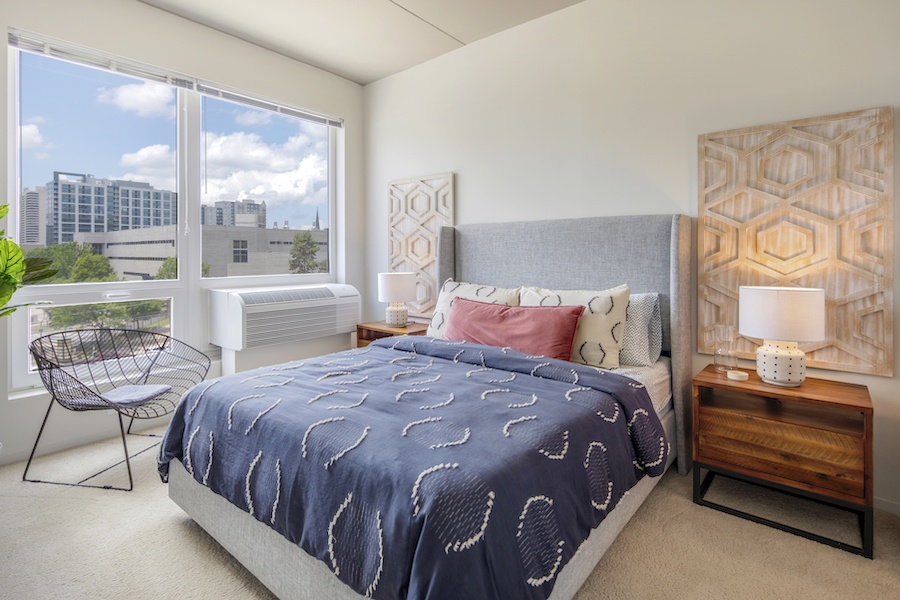 The building also has 1,600 square feet of street-level retail space that has yet to be filled.

The Bozzuto-managed building is the first of two that will occupy the former garage site. A second building attached to this one will add another 297 apartments to this development in the near future.

The Hamilton has connected with its target market, says Yeager.

“It’s a phenomenal location because we’re effectively the gateway to Center City.”

Not to mention the Community College, which Yeager says is equally happy with the project. “They saw this and continue to see this as a good opportunity to house their students, which we do have a number of.”

And not all of them come from overseas either. “We have a lot of international students [attending CCP], but we also some domestic students too.”

Guess some of the local students couldn’t wait to get out from under their parents.

The Hamilton by the Numbers

Number of parking spaces: 150, in an underground parking garage.