Inside (and Outside) The Ludlow, East Market’s First Apartment Building

The developer, architect and designer wanted to take the LEED with this building. They delivered a tour de force that stands out while blending in. 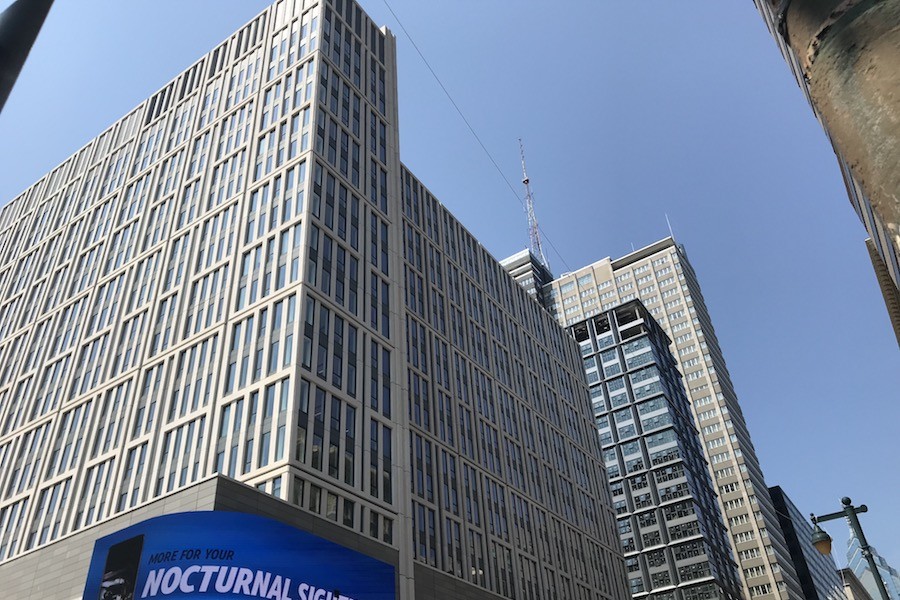 Now that the community spaces are all but finished and the first tenants are moving in, National Real Estate Development Managing Director Dan Killinger invited members of the real estate media over to The Ludlow, the first of two residential towers being built in the East Market development’s first phase last Tuesday, May 15th.

As the leasing staff does with the prospective tenants, Killinger, partner Michael Prifti of project architect BLTa and designer Krista Ninivaggi of interior design firm K&Co. gave your section editor the personal treatment on the tour.

Make that a tour de force. The Ludlow combines sleek and stylish modern apartments with creatively designed community spaces indoors and out in one handsome package that plays nice with its more commercial neighbors. 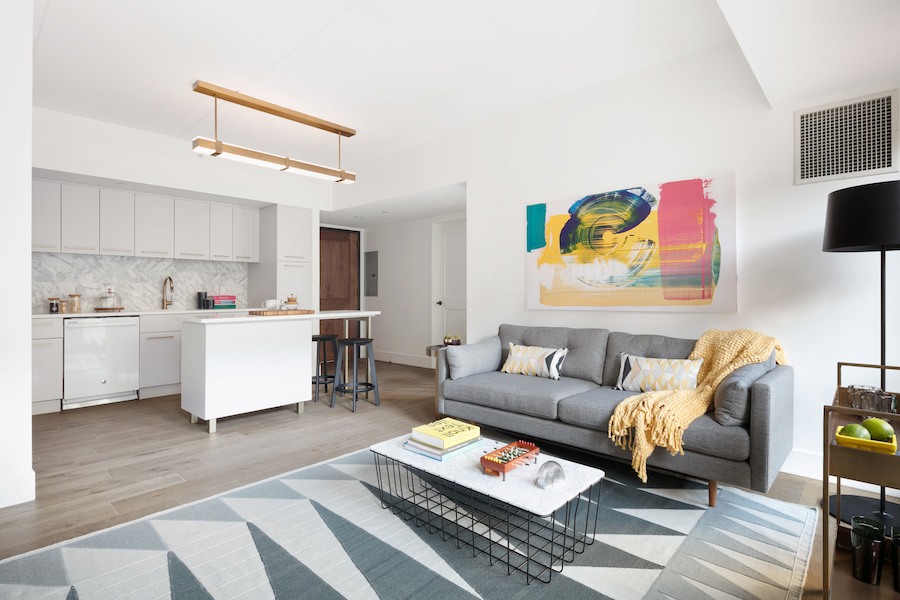 A model one-bedroom apartment with a kitchen island, showing the open floor plan.

Let’s start with the model apartments. The studio, one- and two-bedroom units all feature open-plan main living areas that have gotten out in front of current design trends in their choice of fixtures and finishes. 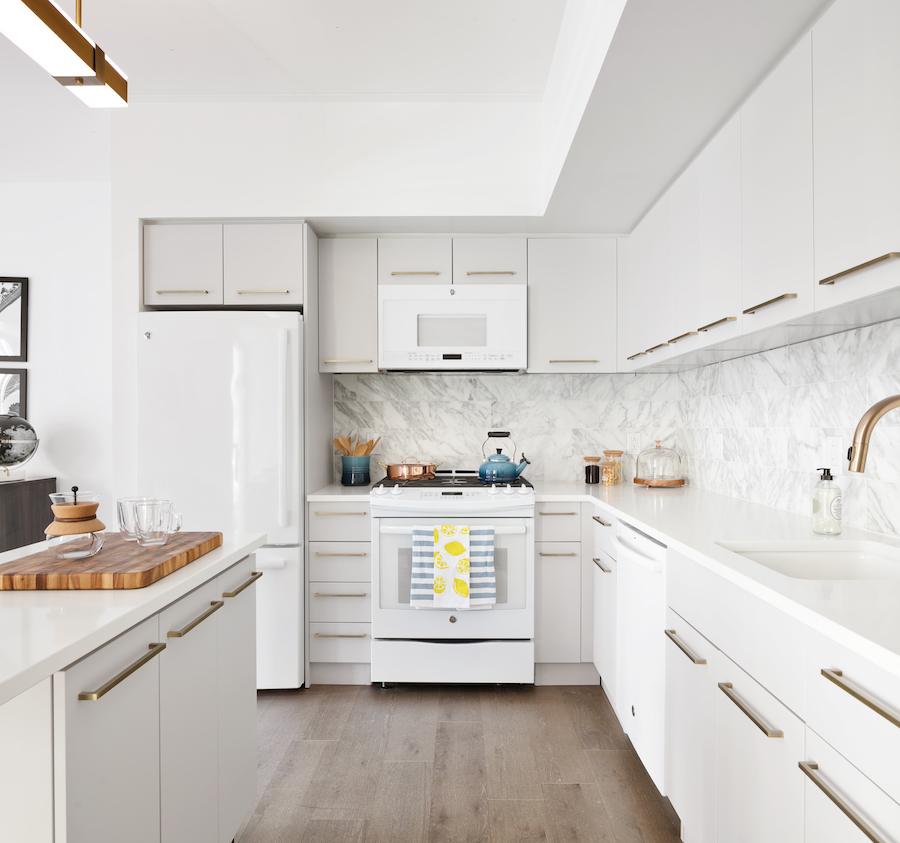 Closeup of a model unit kitchen.

Most notably, these apartments’ kitchens have resisted the tyranny of granite countertops and stainless steel appliances. Instead, they’re visions in white, with gas ranges to boot, something not commonly found in newer apartment developments in Center City. Quartz countertops, marble tile backsplashes, custom Italian cabinetry and bronze LED light fixtures also up the style quotient. 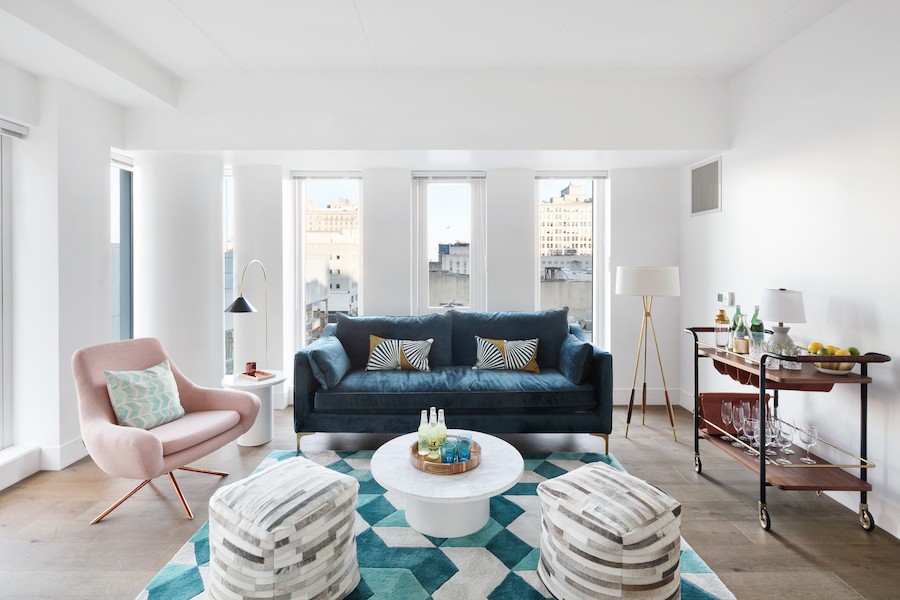 The living room in the model two-bedroom apartment. 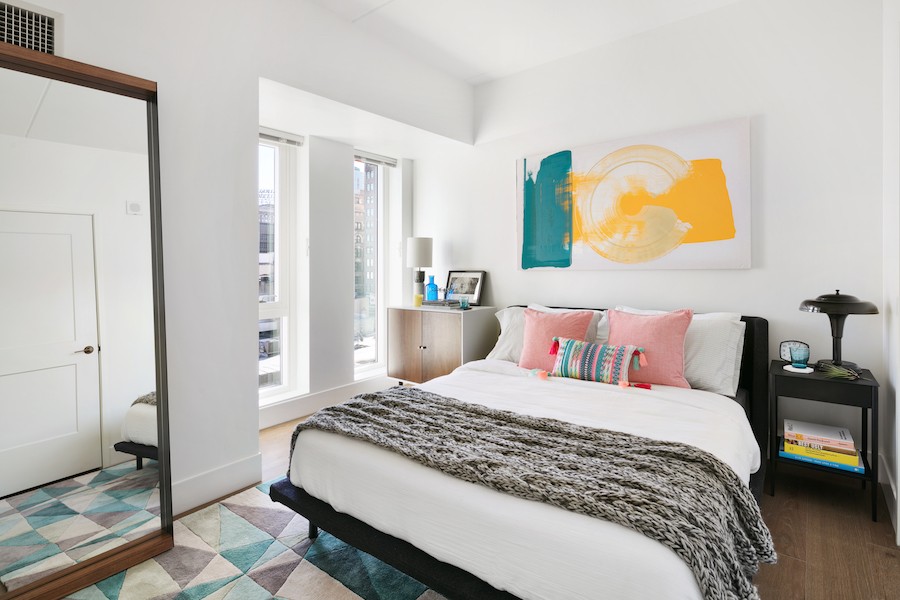 A bedroom in the same model apartment.

Large vertical windows that rise most of the way from the wood floors to the apartments’ high ceilings fill the rooms with natural light. The bedroom closets are also outfitted with elfa storage systems. 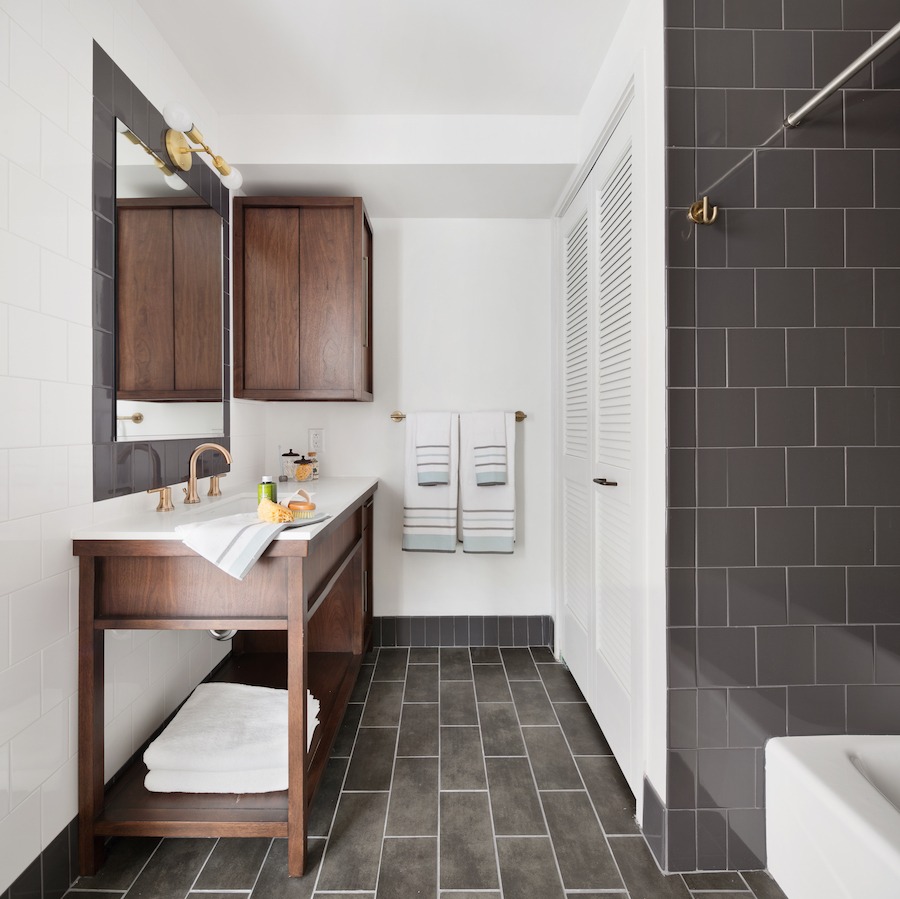 The bathroom in the one-bedroom model unit.

While white dominates the living spaces, the bathrooms are a little warmer thanks to their walnut vanities and dark grey tile tub and shower surrounds. 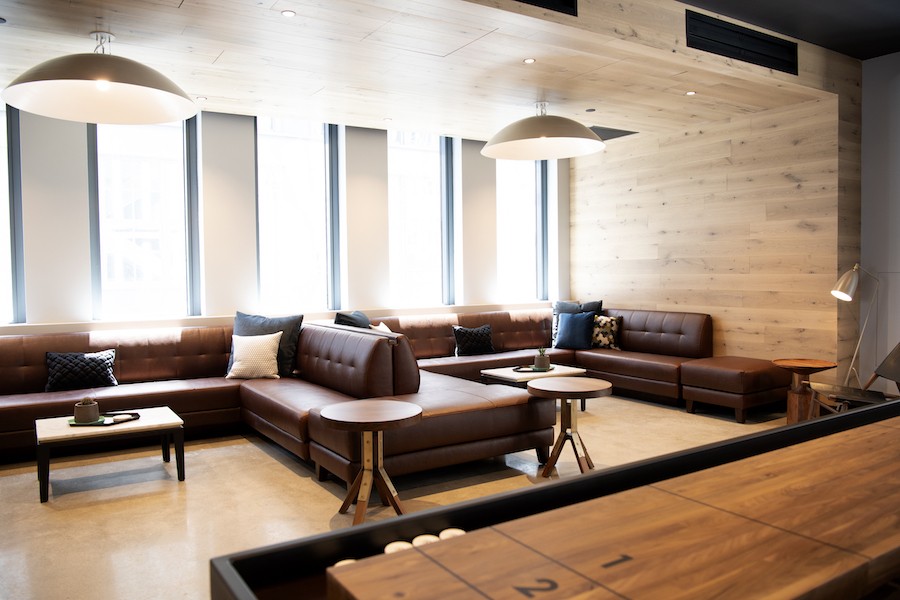 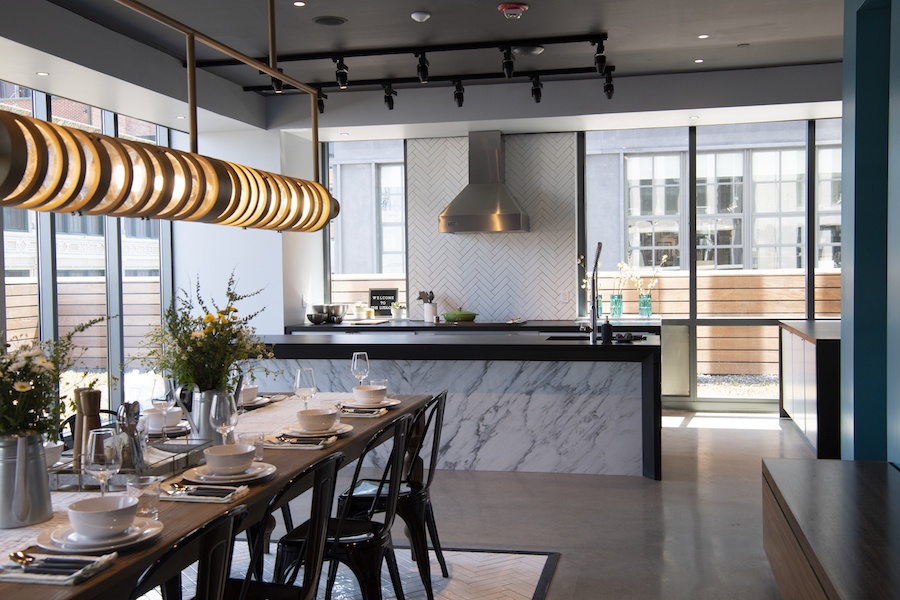 The light fixture over the dining table in the demonstration kitchen was inspired by Ben Franklin’s glass armonica. The kitchen itself features a Thermador induction cooktop range.

Down on the amenity floor, it’s a little more colorful. Ninivaggi used reclaimed wood, windows salvaged from the conversion of the adjacent office building at 34 South 11th and custom-designed lighting inspired by some of Ben Franklin’s inventions to give the game rooms, lounge, viewing rooms, demonstration kitchen and dining room a personality that combines the industrial-loft look (enhanced by the presence of the building’s diagonal steel bracing in the lounge) with futuristic trim. 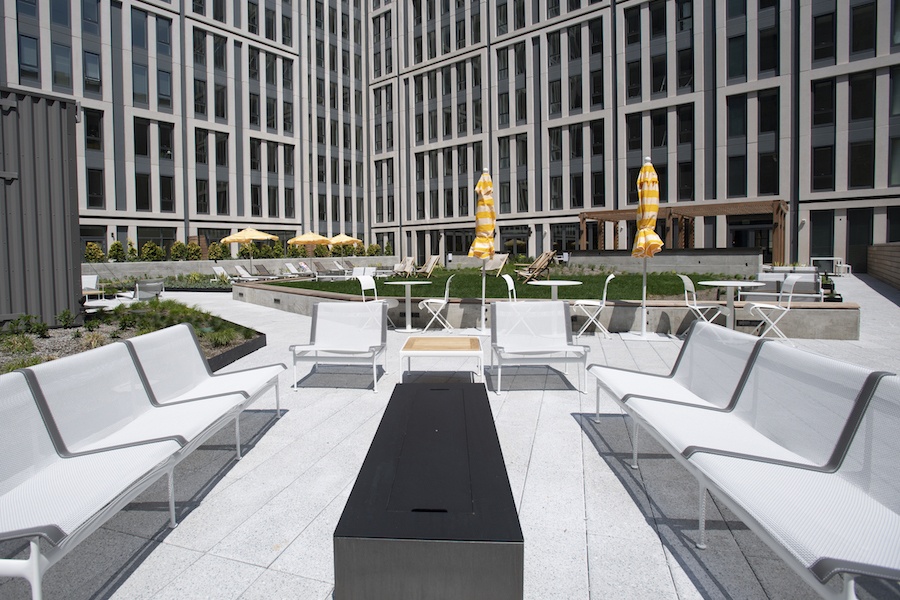 A lounge area on the community terrace. 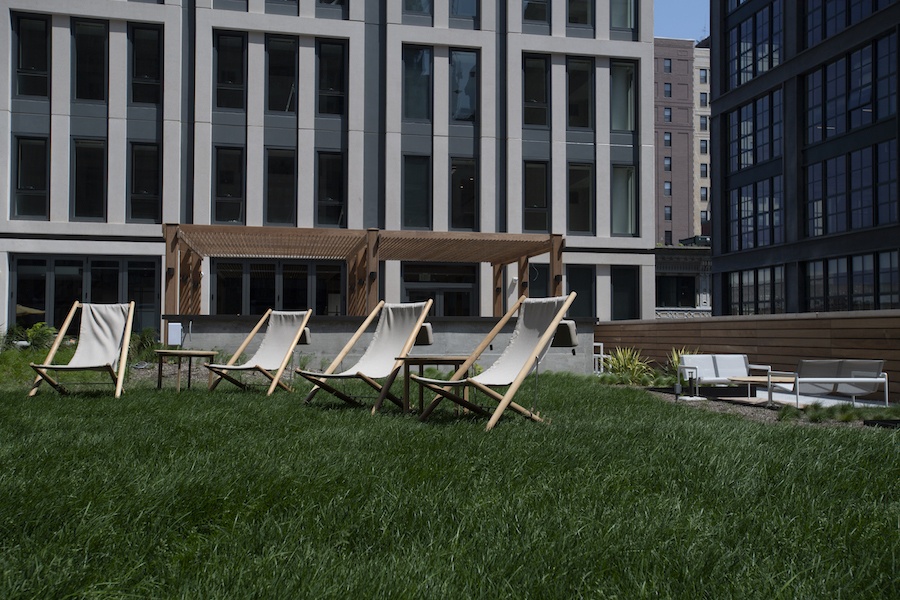 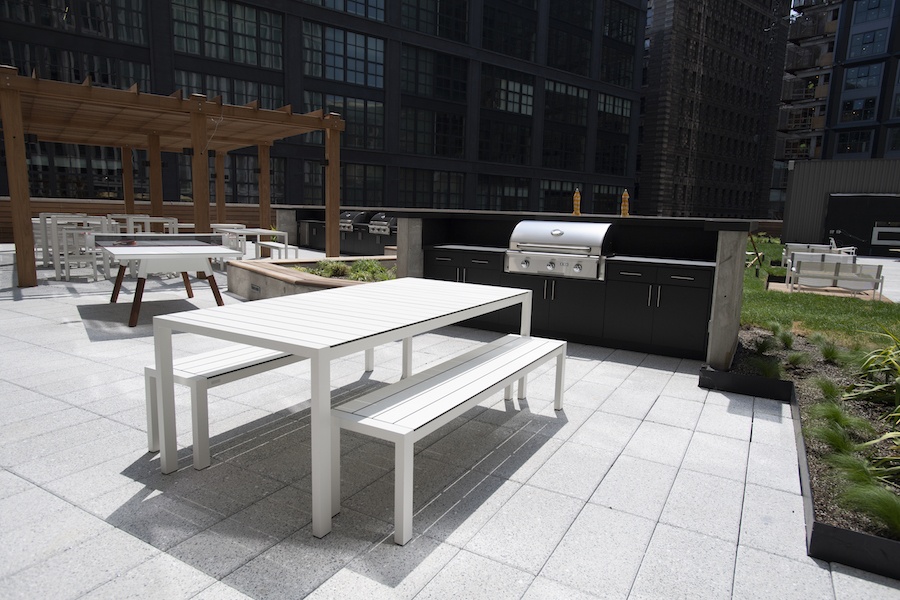 The terrace grilling and dining area.

Outside on the community terrace, plantings both turn the space into an elevated town square park and help manage rainwater, contributing to the building’s anticipated LEED certification. The outdoor amenities include a collapsible big screen for outdoor movie screenings, several grilling stations (two of which can be reserved for tenant functions), a fire pit and outdoor fireplace, a lawn with lawn chairs and lounge seating areas.

This may be one of a few apartment buildings where lower-floor units will command a rent premium. That’s because  the third-floor apartments have their own private terraces. Some of these abut the community terrace while others offer great views of Market Street and City Hall. 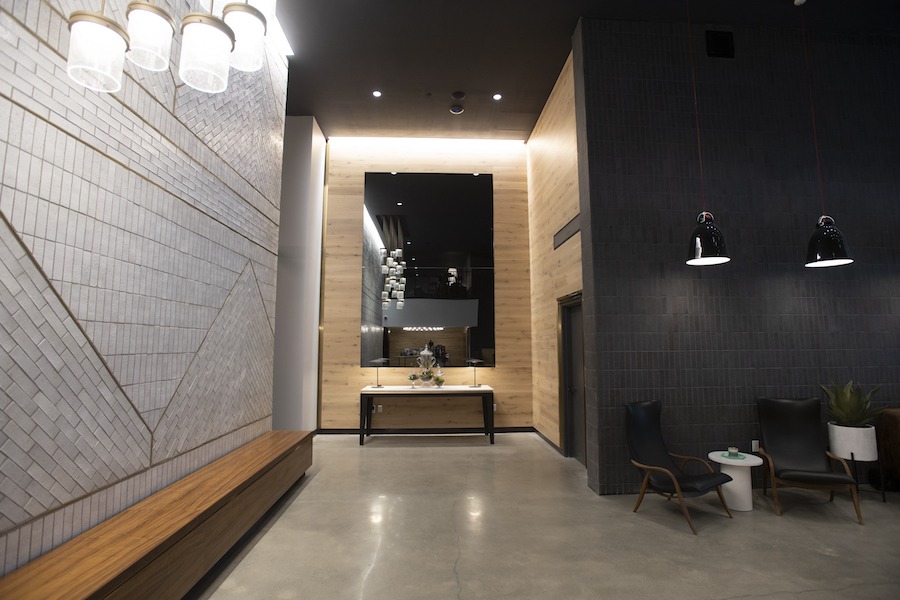 The building lobby. Again, the light fixtures on the left are Franklin-inspired – this time, by the jar he used to capture electricity.

Then there’s the building itself. I was somewhat critical of the building’s exterior cladding as it was being installed; I thought the building had a somewhat monotonous facade that reminded me more of an office building than a residential tower. Approaching it from 8th Street, however, put the design in a different light. First of all, what appears to be a single grid actually has multiple smaller grids within it, making for a polyrhythmic facade.

Second, what some might consider a flaw is actually a feature: this building isn’t meant to stand out in the skyline. It will have two very different towers for next-door neighbors, including the iconic PSFS Building, which the East Market towers block for the most part from the east. It would be a crime to design a tower that upstaged PSFS while blocking your view of it, but since it does block that view, it shouldn’t erase itself either.

What BLTa produced, then, is the ambient music of high-rise towers. For those of you too young to have experienced Brian Eno’s experiments in this short-lived genre in the late 1970s, “ambient music” had as its goal going Muzak one better: If you wanted it to fade into the background, it would, and you could carry on whatever you were doing without it intruding. But if you wanted to listen to it, doing so would reward you with Zen-like tone sequences and chord progressions. Not every tower in a skyline has to be a showpiece: the star buildings need backdrops and context to play off of, and this building offers it after the fact. 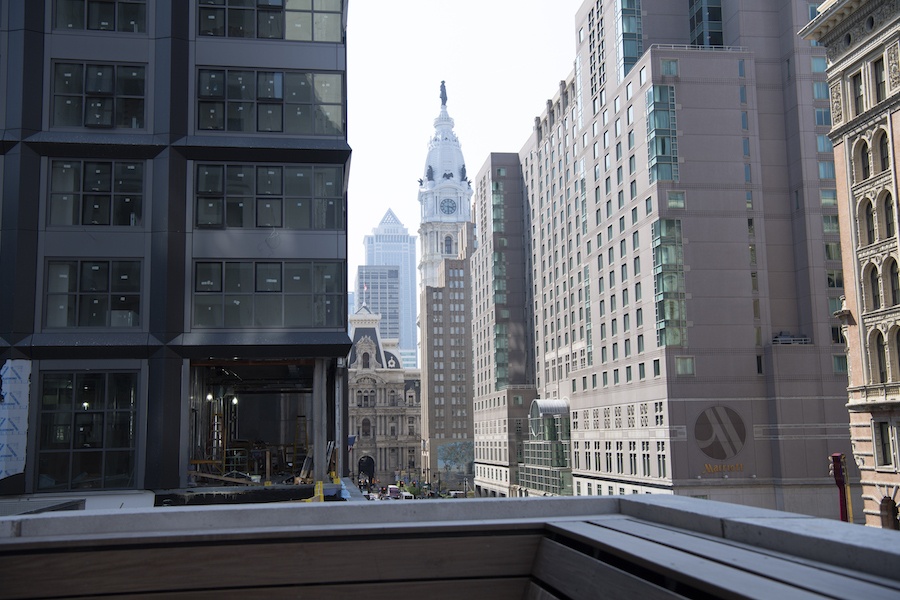 The view you see here is from Apt. 321, at the Ludlow’s northwest corner. The two-bedroom, two-bath, 936-square-foot terrace apartment is also the building’s most expensive, renting for $4,135 per month.

The pace of leasing at The Ludlow is moving fairly rapidly since it opened for occupancy in April; as of mid-May, 17 percent of its 322 apartments had been leased. The breakdown of units in the building is as follows: