ISA designed and Callahan Ward built the "Tiny Tower" to prove that building on small, narrow lots could be done - and priced - affordably. 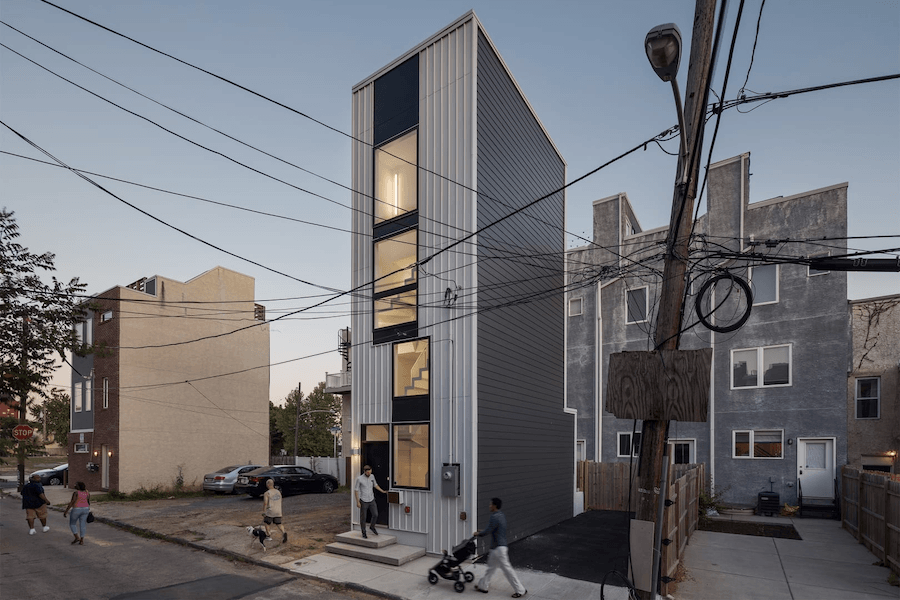 Once-derelict city neighborhoods continue to be transformed by builders who throw up new houses by the dozens on standard-sized or larger vacant lots.

As those lots fill, they raise a question: What do we do with the leftovers?

Oftentimes, these too-small lots become side yards or parking spaces. For showing how it’s possible to fit houses on them, Interface Studio Architects (ISA) has won a 2019 Housing Award from the American Institute of Architects (AIA).

AIA bestowed the award on ISA’s “Tiny Tower” house in Brewerytown, built by Callahan Ward Companies. The award is one of two handed out in the “One- and Two-Family Production Homes” category, one of 16 in all and the only award-winning project in Pennsylvania.

Inside Look: The Narrowest House in Philadelphia May Just Be This One in Manayunk 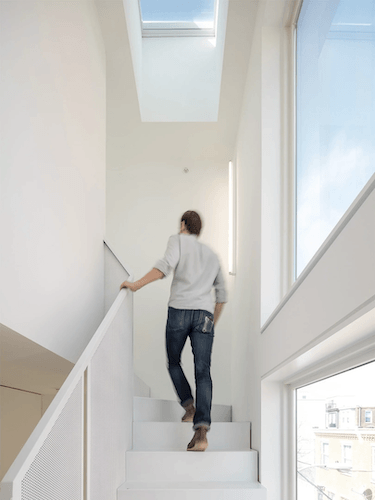 The metal stairway at the front of the building also serves as an atrium, letting light filter down into the rooms from a skylight at its top and through the large front windows.

Why did they call this project “Tiny Tower”? One look at the house should tell you why. It’s a very slender, four-story-tall structure — five when you include the below-grade basement. The lot it sits on is 12 feet wide by 29 feet deep. Its floors hang off of a single “core”: the stairwell at the front of the house. And there’s just one room on each floor, not counting the bathrooms on the two bedroom floors and the powder room next to the kitchen in the basement.

Despite that pedigree and its name, Tiny Tower is anything but on the inside: it contains two bedrooms, two and a half baths and 1,200 square feet of space. “It’s not a ‘tiny house’ per se, but it dovetails with the tiny house movement,” says Toconita’s longtime friend, Callahan Ward co-founder and Development Director Nino Cutrufello.

It dovetails by showing how small spaces can be used to maximum utility. In this case, the small space is that small, narrow lot on which it sits. In addition to the indoor space, the house has outdoor space in the form of a lightwell garden in the basement, a walkout terrace on the second floor and a roof deck.

Both architect and builder had goals for this collaboration. For Callahan Ward, which specializes in high-quality, architect-designed higher-end residences, “it was an interest in building something more modest and making it feel like a pleasant space to be in,” says Toconita. “For ISA, it was a bigger challenge: how you can fill small infill lots in cities.”

Both had an interest in demonstrating that a project like this could be built at a reasonable cost. One of the contributing factors was the low cost of the land. “The cost to acquire the lot was very low because the adjacent lots were being used as parking spots,” Toconita explains. 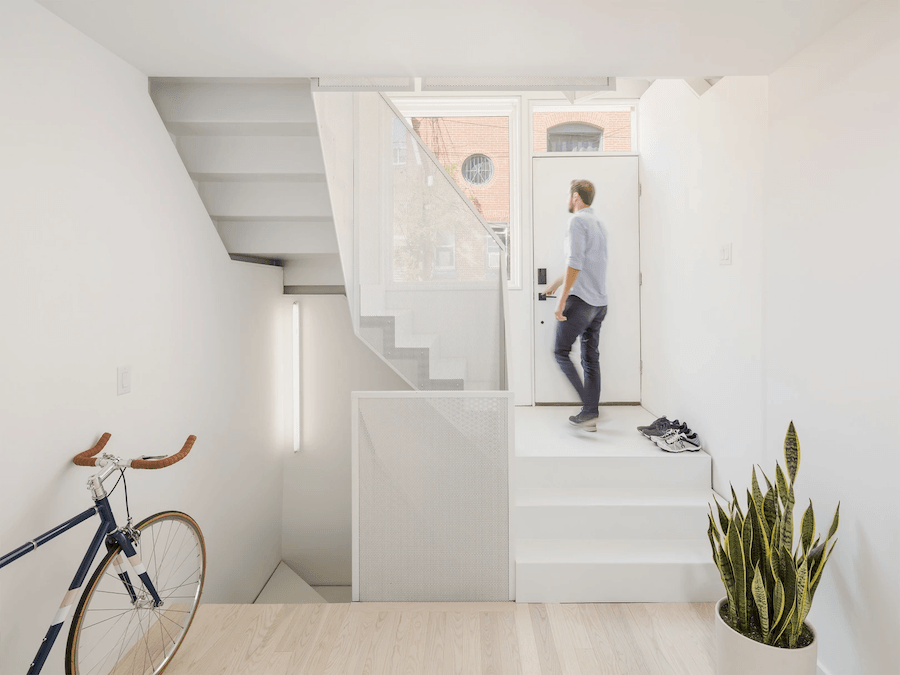 By putting the first floor slightly below grade, ISA was able to fit four full floors within the 38-foot-high limit set by the lot’s zoning.

Another contributing factor: No need to seek variances to build it. The house as designed could be built by right under the lot’s zoning. And it fits very tightly within the building envelope that zoning describes: the stepbacks that create the lightwell garden and rear terrace provide the necessary space between the building and the rear lot line, and it uses every inch of the allowed 38 feet of height. And with no pilot house to boot: an exterior staircase at the back leads from the top-floor master bedroom up to the roof deck. 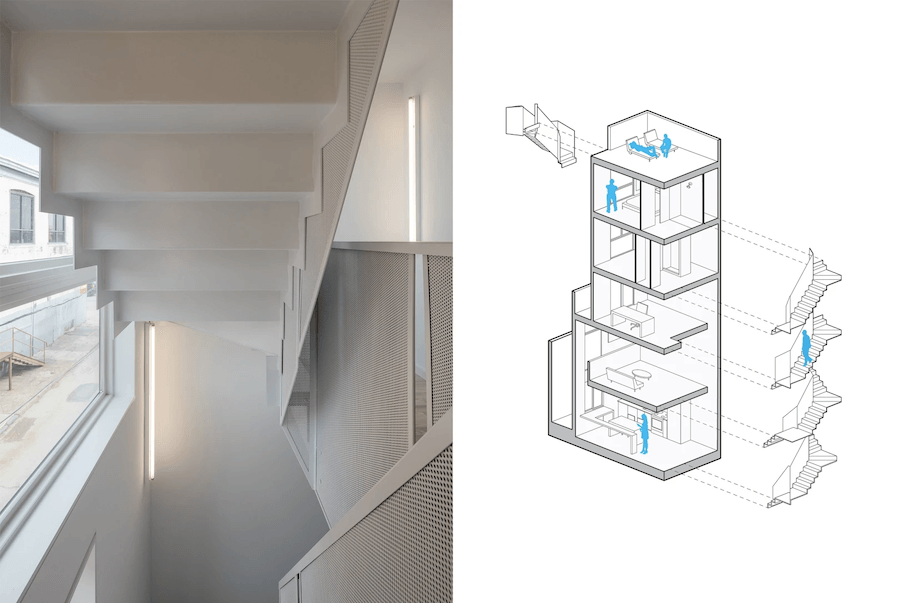 Through the use of stepbacks at the back of the lot, the house gains open space while meeting the lot’s zoning requirements.

The placing of the staircases, Cutrufello says, makes this house work. The metal staircases with mesh railings allow light from the large front windows to filter through them while allowing for easier negotiation of the turns. (You will have no problem getting a mattress up them, for instance.) They also serve as a light well for the skylight that tops them.

Cheaper by the dozen

The cost to build this house? A reasonable $265,000. Toconita says that if this house had been built as part of a row rather than as a standalone house, it would have cost even less because it would not have needed a steel frame on its lower floors to help it resist wind shear forces. The house is currently rented to a tenant, but Toconita says that if it were to go on the market, it would have a sale price of about $400,000, or $333 per square foot.

Since completing Tiny Tower, Callahan Ward and ISA have gone a little deeper into their exploration of how to do big things in small spaces: The two firms collaborated on the “XS House,” a seven-unit apartment building in Chinatown that sits on a 92-foot-long, 11-foot-wide lot. Chances are you may read about that project, which was completed at the start of this year, when next year’s AIA Housing Awards roll around.