The Southern Land Company founder and CEO saw opportunity in Philadelphia when everyone else was ignoring it. It's paid off handsomely for both his company and its investors. 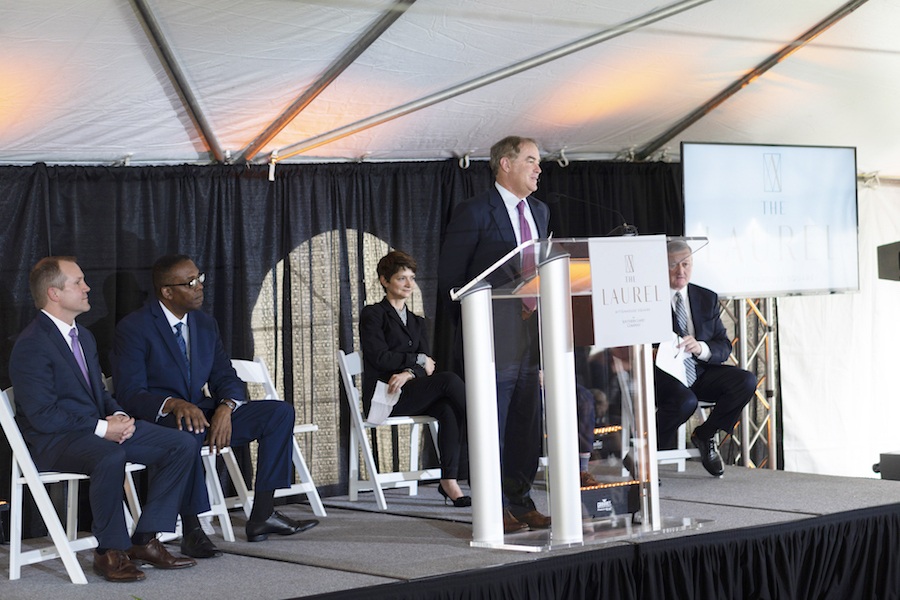 Every year in the fall, PwC and the Urban Land Institute produce a widely followed forecast called “Emerging Trends in Real Estate.” (The 2019 edition, the 40th, has just been released.) The most closely watched item in the report is its list of the top markets for investing in real estate nationwide in the year ahead.

And every year, Philadelphia fails to land in the top ranks of this list. For the coming year, it ranks 31st out of 79 “markets to watch” across the country. (Within its region, the Mid-Atlantic, it ranks third, however.)

Fortunately for him, his company, and this city, Southern Land Company founder and CEO Tim Downey went with his gut feeling rather than what the forecasters said he should do.  And because he did, the firm based in Nashville (the No. 5 market to watch next year, according to “Emerging Trends”) has already changed the way outside investors think of this place.

But Southern Land has done more than that: it’s changed the face of Philadelphia — twice. First there was the 28-story apartment tower at 3601 Market St. Completed in the summer of 2015, it was the first high-rise residential building in University City that was not designed as student housing, and it also turned the University City Science Center from an office park to a live/work/play community. And on its way now is The Laurel, the building that will once again complete Rittenhouse Square. When it opens in 2021, it will be the tallest residential building in the city.

Downey and his company got to this spot by doing some homework before making their first acquisition here.

“We did an in-depth study of all the largest cities in the country,” he says. “We did about 50 cities, all the way down to the size of Nashville, and we looked at all sorts of different demographics. And one of the things that struck us about Philadelphia is that the occupancy rates [in rental apartment buildings] were so high — they were around 98 percent — and there was so little new building going on.

“We were getting the reports about how the city was transforming, how much lovelier and livelier it was becoming, but people were just moving to the places that had always been there. It seemed ideal: a city of more than 5 million people and no new supply, transforming itself with all these shops and restaurants opening up. We proved to be right about all of these.”

An early adopter of walkability

Southern Land also chose Philadelphia as a place to invest big time because it had all the attributes Downey prized in a city. “Thirty-two years ago” — 1986, when he founded the company — “no one was into walkability,” he says. “The suburbanites didn’t commercial [uses] around them; they didn’t want to be able to walk to anything. Now they want to walk to everything.” By contrast, even in the suburbs, Philadelphians had been used to walking places for decades.

“It’s funny,” Downey says. “Every once in a while, people would ask us, ‘Why Philadelphia?’ Because so many people thought it was a town that was losing jobs, that was on the decline because of the closing of the shipyards and all that. They didn’t know how wrong they were.”

Some locals had already gotten wise, however: Brandywine Realty Trust completed a student high-rise in West Philly the year before Southern Land opened its tower, and Radnor Property Group had two irons in the fire in the same area at the same time: the Episcopal Cathedral parish-house-site project at 3737 Chestnut and Vue32 in Powelton Village next to the Drexel campus. But the boys from Nashville showed that not just students were clamoring for shiny new apartment towers hereabouts. 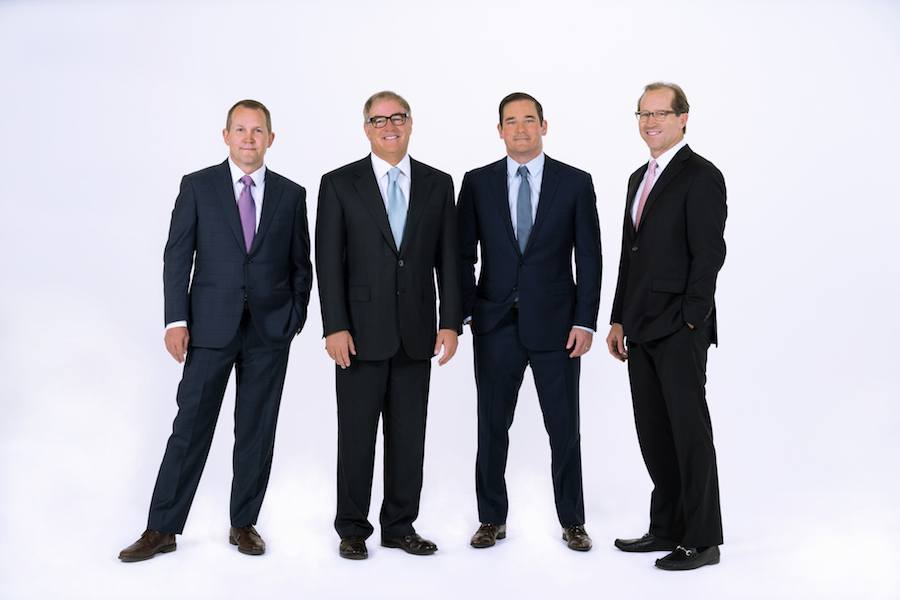 Actually, Southern Land didn’t start in Nashville. Downey started his company in Chattanooga, a smaller city about an hour and a half southeast of Nashville. And Downey isn’t even a Southerner, technically speaking: Born in Chicago, he had attended grade school in Detroit before his family moved to Chattanooga by the time he entered high school. But he has remained in the Volunteer State ever since: “Tennessee is home now.”

The early years were rough for him and Southern Land: “For the first 10 to 15 years, I struggled to make ends meet,” he says. But the company found its groove soon after that: Developing residential and commercial projects designed to be pleasing to all the senses. There was only so much of this he could do in Chattanooga, so he moved the company to Nashville in order to have access to an airport that would put him closer to the places where he could do bigger deals. The company has now completed or is in the process of creating 15 multifamily and four single-family residential communities in six states, with a 16th in the works. The company also has two conmercial projects attached to two of those residential developments.

To date, Philadelphia is the only market outside the Sunbelt where Southern Land has built anything. But Downey confesses a love for New York City too, and should the company find an attractive parcel that’s priced right — something that’s much harder to find there than here — it’s probably a safe bet to say that it will give the opportunity a serious going over at the least.

For Downey, attractive landscaping and attractive buildings go hand in hand: “We do really unique projects around the country that focus on architecture and horticulture,” he says. So far in Philadelphia, Downey hasn’t had to worry overmuch about the greenery and plants. But they haven’t escaped his notice, and their presence was one of the things that appealed to him about the Laurel’s site. “Look at Rittenhouse Square, how green it is,” he says. “It’s a benefit to the city to have all that green in its heart.”

Downey first began looking for development opportunities in Philadelphia about 10 years ago. It found its first opportunity in 2013 at 36th and Market. Initially, Downey thought he would need to downplay his company’s Southern roots here, but as it turned out, they proved to be an asset.

“When I started doing business in the Northeast, people knew I was from Nashville and they assumed I was from the South,” he says. That proved to be a PR plus: “We didn’t want to be this hard-charging developer who came in and made promises, then didn’t do what we said we’d do. So they saw the way we did things, the politeness and the friendliness, and they embraced it in Philadelphia and New York, and I think they enjoyed the difference.

“So I thought we should be proud of being Southern gentlemen. We live that culture here.”

What happens when everyone pulls together 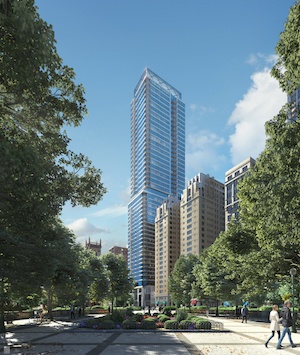 Downey points to the roughly four years it took to get The Laurel from idea to groundbreaking as an example of Southern Land’s operating style. During that time, the company met repeatedly with a stakeholders’ committee consisting of neighborhood residents and two architects, formed with the blessing of Rittenhouse Square’s civic association. The group pressed for better architecture, saving historic buildings on the site and a set-aside for affordable housing. They walked away with just about everything they asked for, including the affordable housing.

Downey had nothing but praise for the group. “The difference between what they did and what I’m used to is that they really embraced building something,” he says. “What this group was about was building something beautiful, something worthy of the last undeveloped lot on Rittenhouse Square. They really did a lot to turn this project around and make it beautiful.”

Right now, Southern Land is focusing all its effort locally on finishing The Laurel. Downey is aware that the undersupply in the local high-end rental market has turned into an oversupply in the five years since 3601 Market opened. But he sees this as a temporary phenomenon. “When we open two and a half years from now, we think the market will be tighter,” he says. “And even with the excess supply, we did great with the University City project — we managed to fill it up quickly.

“It may have had something to do with [the nature of] the demand,” he adds. “There are people who wanted to be in University City and who wanted to live downtown who were living in other parts of the city and are now moving in.”

Interest in The Laurel’s condominium units has run high since they were first offered for purchase. The strength of the interest led Southern Land to adjust the mix of condos to apartments in favor of more condos. It also enabled the company to break ground for the project six months ahead of schedule.

Unlike some of the investors who finance Southern Land’s individual projects, Downey wants to be in this market for the long haul. Investors who were more interested in a large short-term return, he says, forced the company to sell 3601 Market this past July. He has no intention of selling The Laurel if he can help it: “It’s such an iconic spot. I never want to sell it.”