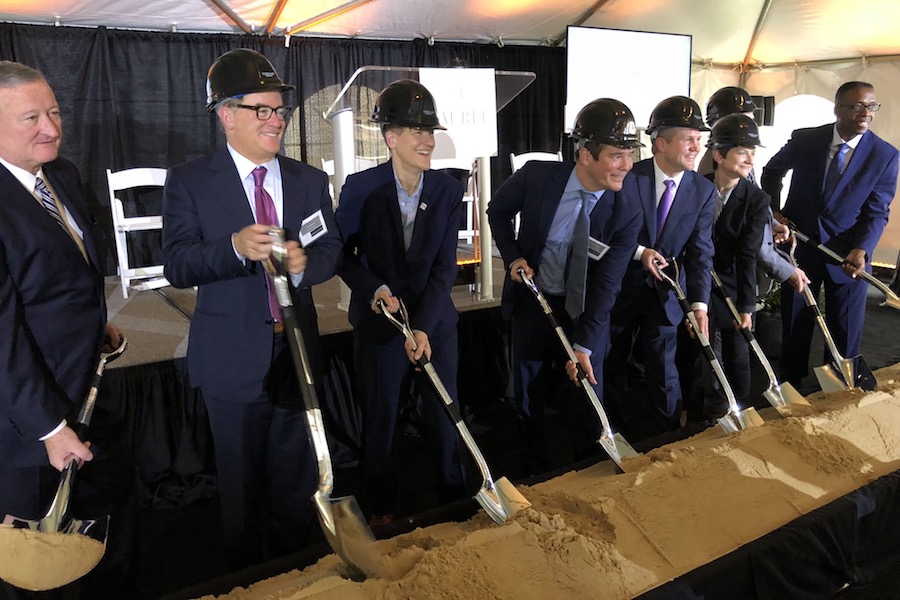 This wasn’t supposed to have happened until next spring. But Brian Emmons, Southern Land’s development manager in Philadelphia, said that strong pre-sales of condos enabled the company to meet the capital requirements to start work well ahead of the planned spring groundbreaking.

Those pre-sales also led the company to change the balance of condos to rental apartments. Five floors that had been slated to hold apartments will now contain condominiums instead, bringing the total number of condos to 74 and reducing the number of apartments to 175.

No arm-twisting involved for affordable units

Ten percent, or 17, of those apartments will be affordable units, a fact all of the city officials present made a point of emphasizing. Clarke in particular praised Southern Land for this commitment, noting, “You didn’t even have to have your arm twisted” to include them.

(You can see renderings of what the building will look like when finished here. Just move the condo’s amenity floor down five levels.)

The road to this groundbreaking had plenty of twists and turns. The lot became empty when the movie theaters that stood on it were demolished following a 1994 fire that severely damaged them. Since that time, several redevelopment proposals had been floated for the site, but none of them managed to gain enough support or funding to get off the ground. This project too underwent several revisions before morphing into its current form. One of those incorporated two of three historic structures occupying its site into the finished product.

Clarke also alluded to this when he spoke of the “nine million different iterations” of redevelopment projects in his remarks.

Praise for the neighbors too

Southern Land CEO Tim Downey had nothing but praise for the neighborhood organizations who also pushed to shape the project to their liking. “They didn’t tell me not to build the building or to go back to Tennessee, but instead, they said, ‘Make it beautiful,’ make it special,'” he said at the groundbreaking. With an assist from Cecil Baker + Partners, project architect Solomon Coldwell Buenz has managed to do just that.

Downey also confessed his love for Philadelphia in his remarks. “I tell everyone in Tennessee how great Philadephia is,” he said.

When completed, the 600-foot tower will be the tallest purely residential building in the city. It remains to be seen whether its penthouse unit will break the record sale price currently held by 500 Walnut. Given its elevation, the odds are probably in its favor.