A Day at the Comcast Technology Center, A Night at The Four Seasons

The new Comcast Technology Center is half-open for business. Its two tenants offered the media an inside look at what's done and what's to come. 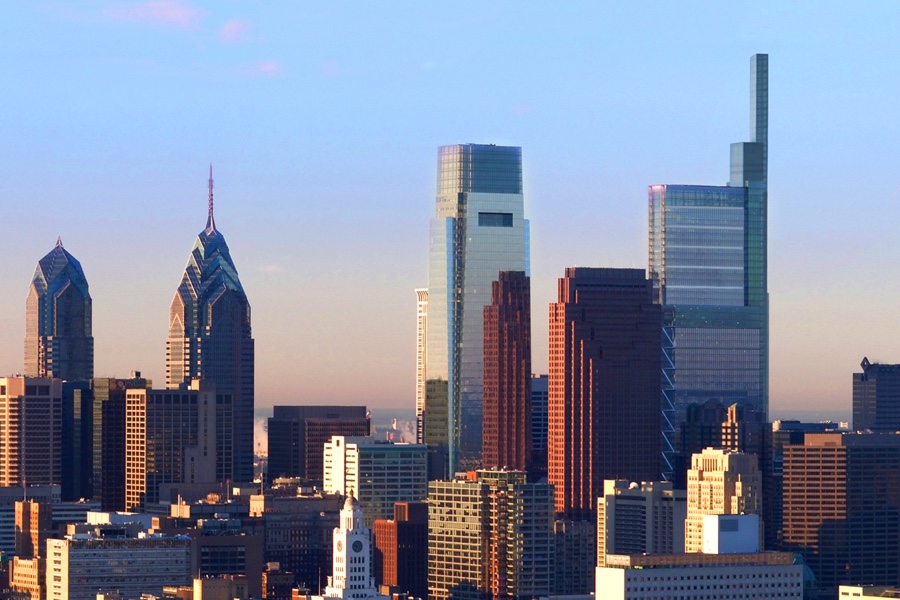 You should be able to make out the hotel and office portions of the Comcast Technology Center in this skyline view. | Office space photos courtesy Comcast, hotel and Pop-Down photos and renderings courtesy Four Seasons Hotels & Resorts unless otherwise indicated

The outside of the Comcast Technology Center is complete, but there’s still some work left to do inside.

That didn’t keep the building’s co-owner (with Liberty Property Trust) and its principal tenant from throwing open the doors of the not-yet-open-to-the-general-public skyscraper Sept. 24 for a look at the finished part and a preview of what’s to come. 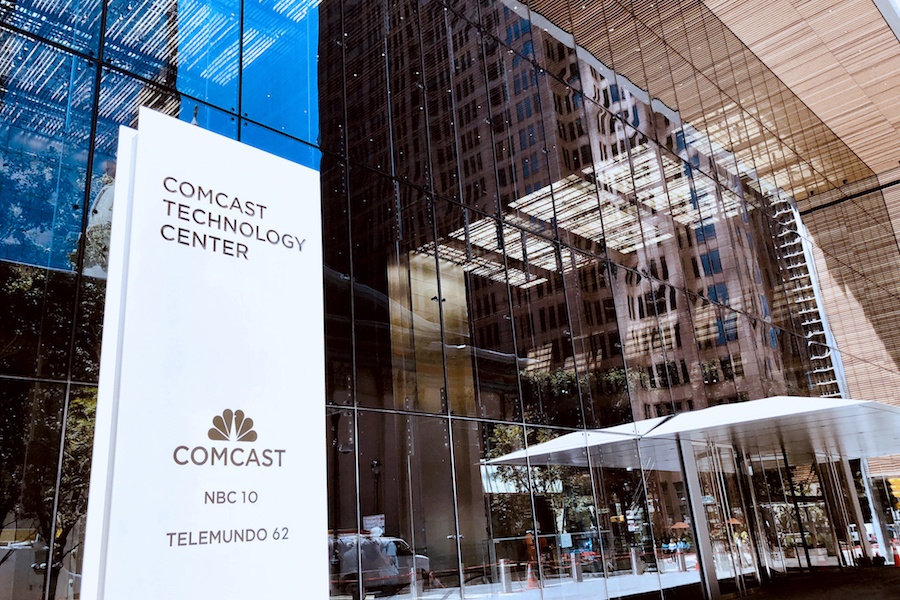 The entrance to the office portion of the building.

The tour began in the Comcast lobby, a soaring two-story-high space that will eventually be connected to both the Four Seasons hotel entrance and the Comcast Center via an underground concourse. 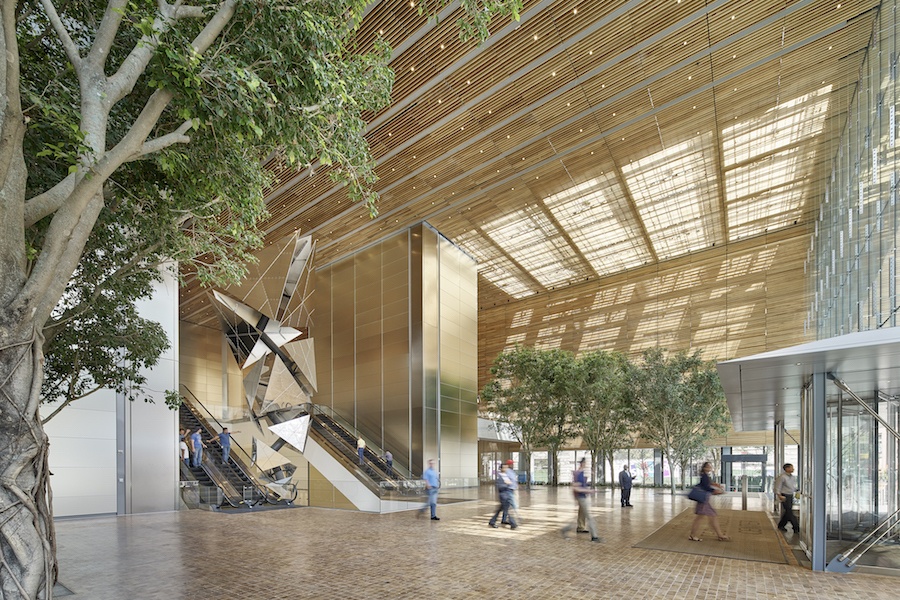 Comcast and Four Seasons representatives described this as the second building on Comcast’s “campus.” That word may sound strange when used to describe two skyscrapers next to each other, but Four Seasons General Manager Ben Shank explained that the two buildings together include food and beverage establishments, retail shops, TV studios and office space for 8,000 Comcast employees — plus, of course, “this jewel of a hotel that sits on top.” 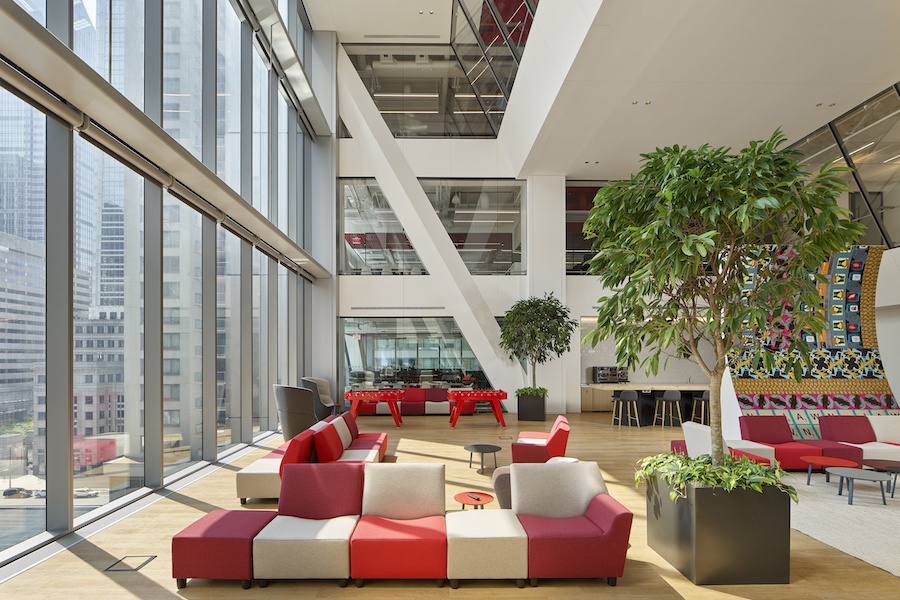 One of the lounge spaces in the Comcast Technology Center, equipped for recreation. This one has game tables and an espresso bar.

Comcast Senior Vice President Karen Buchholz also used that term to describe the relationship between the new tower and the first one. The new tower’s staff lounge areas all face east, she said, in order to emphasize the connection between the two campus buildings. 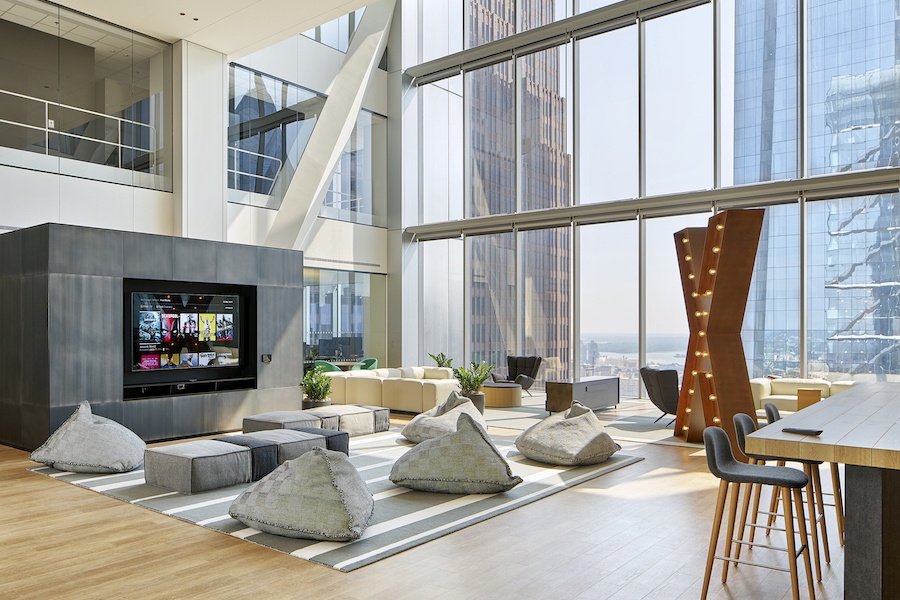 Another lounge space, this one outfitted with beanbag chairs and a big-screen TV for event viewing.

Each of the office floors in the building is part of a three-floor cluster, with a lounge at the east end of each cluster. The workspaces and the lounges are designed to accommodate a variety of work and leisure styles: quiet and bookish like a library, gregarious, collaborative and casual like a game room, and so on. 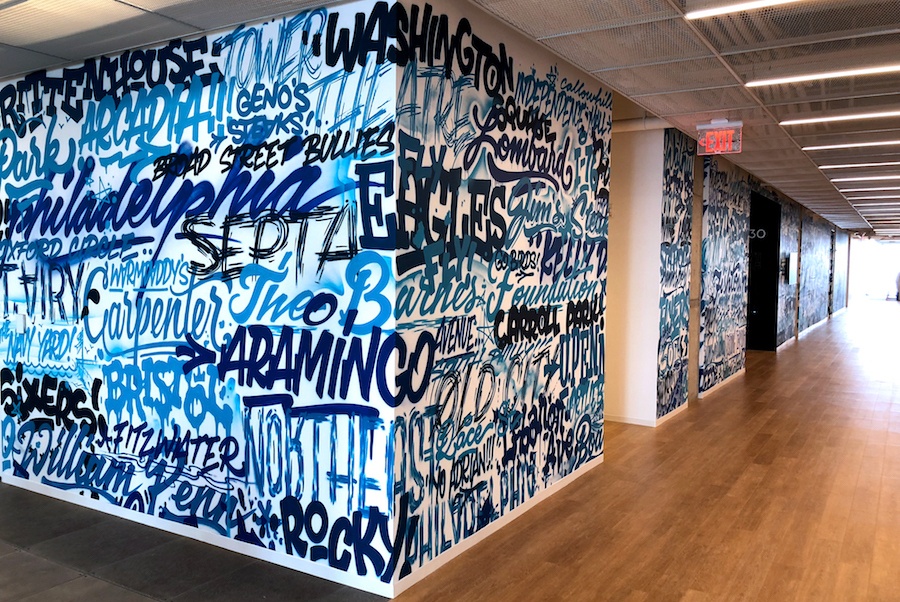 The “graffiti wall” on one of the Comcast Technology Center’s corridors.

Comcast also commissioned both its own staff and local artists to create interesting art and graphics for the building’s corridors. This wall of familiar Philadelphia terms, for instance, was created by Philly-bred graffiti artist Glossblack. 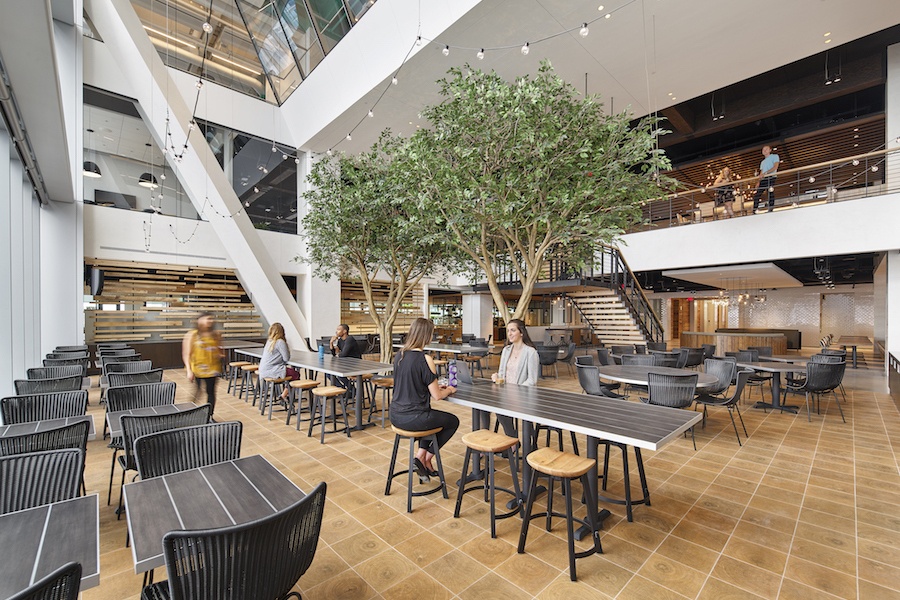 The lounge space in the staff restaurant.

This tower has its own staff restaurant as well. Unlike the one in the Comcast Center, this one’s on the office building’s lower floors. It too is part of a three-floor cluster, and its seating area serves as the lounge for the two floors above it. 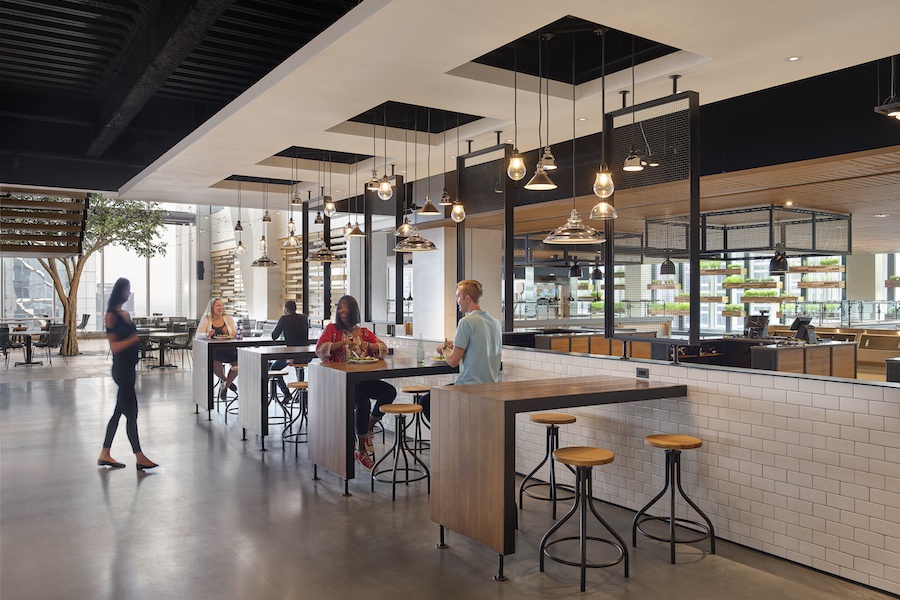 Dining tables in the restaurant corridor. The serving stations and herb wall are in the rear on the right.

One of its most distinctive features is the in-house herb garden along the south wall of the serving-station area; from it, restaurant staff harvest herbs for use in the dishes they prepare.

That restaurant, however, won’t be the only eatery with a view, nor will it be the only one employees can take advantage of. Four Seasons has tapped chef Greg Vernick to operate both a coffee bar on the office building mezzanine and a neighborhood-eatery-style casual seafood restaurant called Vernick Fish off the hotel’s street entrance. The coffee bar is now in business, while the seafood restaurant will open along with the rest of the hotel in the spring of 2019. 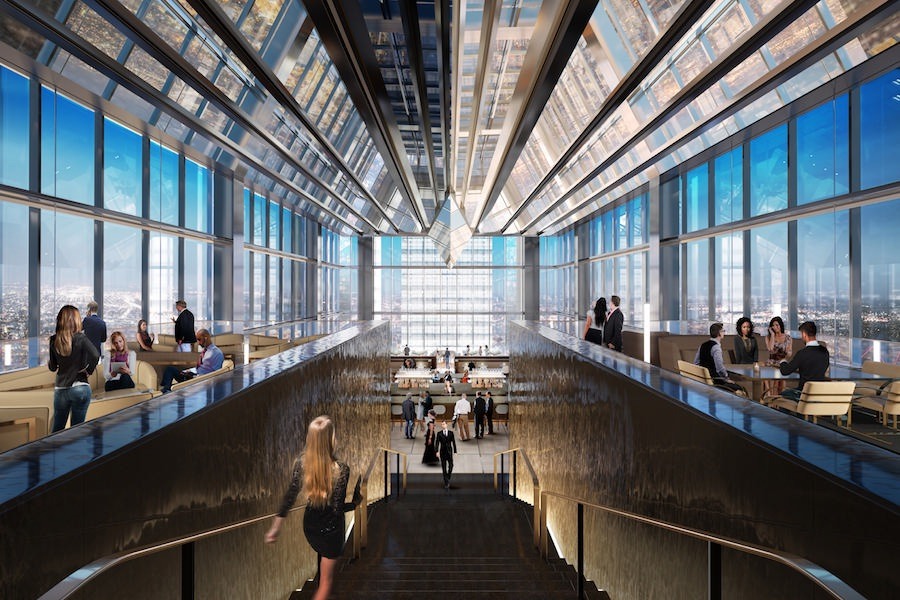 At that time, workers, visitors and hotel guests will also be able to avail themselves of what will be the most spectacular restaurant space in the city. Located on the top two floors of the Four Seasons Hotel, the restaurant will redefine dining with a view in Philadelphia: at more than 900 feet, it will be the highest restaurant in the city, perched atop the highest hotel in the country. Chef Jean-Georges Vongerichten will preside over the Norman Foster + Partners-designed bar and restaurant, which will sit just past the hotel’s registration and concierge desks. 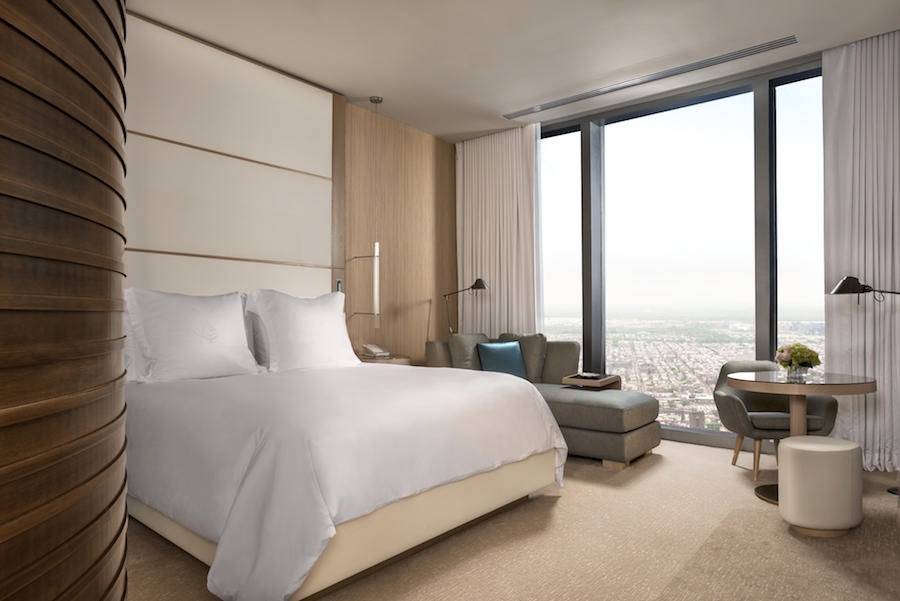 A typical guest room in the Four Seasons. 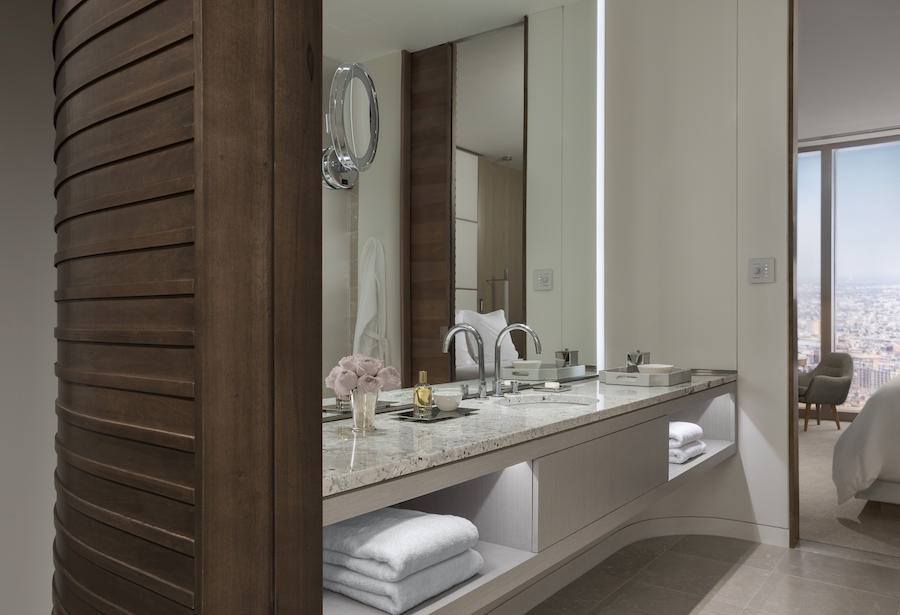 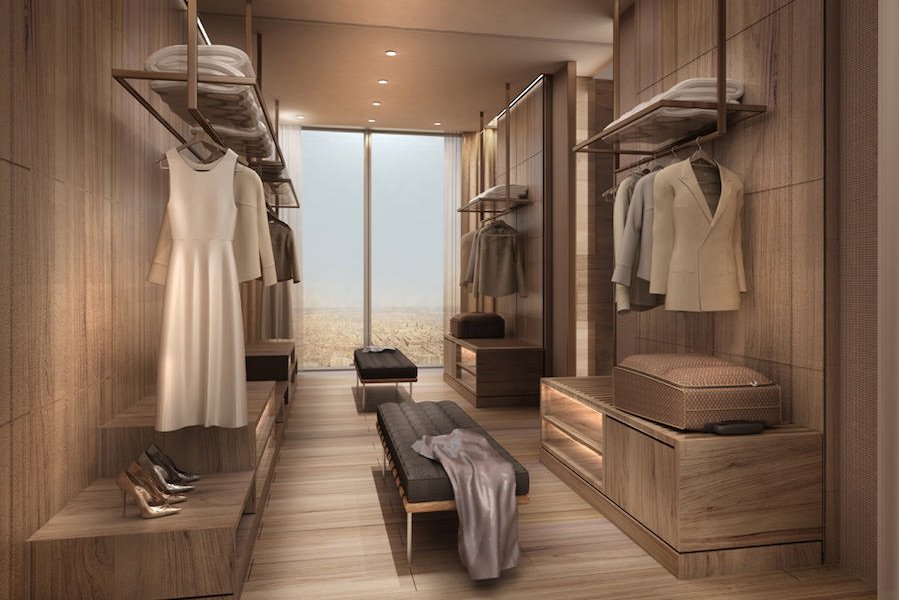 Some of the rooms and suites come with extra-large closets with dressing areas.

The hotel rooms and other amenities will lie on the floors below the 59th, extending down to the 40th. Of course, the hotel rooms will be equipped with large-screen TVs connected to Comcast’s Xfinity X1 entertainment platform.

The Comcast Technology Center project came along at the right time for Four Seasons, whose 30-year contract to operate the hotel at One Logan Square was nearing its end at the time the second Comcast tower project was on the drawing boards. Comcast CEO Brian Roberts was also looking to incorporate a hotel into the new tower. Enter Four Seasons as its operator. (Four Seasons Hotels & Resorts is a property management company; it does not own any of the nearly 150 hotels and residences it operates worldwide.)

To give the city a taste of what’s to come, Four Seasons staged a “pop down” event the day after the tour at Bok Bar. The event, which gave the influencers who attended a one-night taste of the Four Seasons experience,  transformed the city’s hottest rooftop bar into a lush garden, with “florist to the stars” Jeff Latham overseeing the floral arrangements, greenery and topiary.

Bar managers, chefs and pastry specialists from Four Seasons hotels around the globe joined Vernick, Vongerichten and Four Seasons Philadelphia staff in serving up signature cocktails and samples of creative dishes. And the crowd got a special surprise when the hotel brought out DJ Jazzy Jeff to spin the tunes for the last half of the party. Below you will find photos from that event. 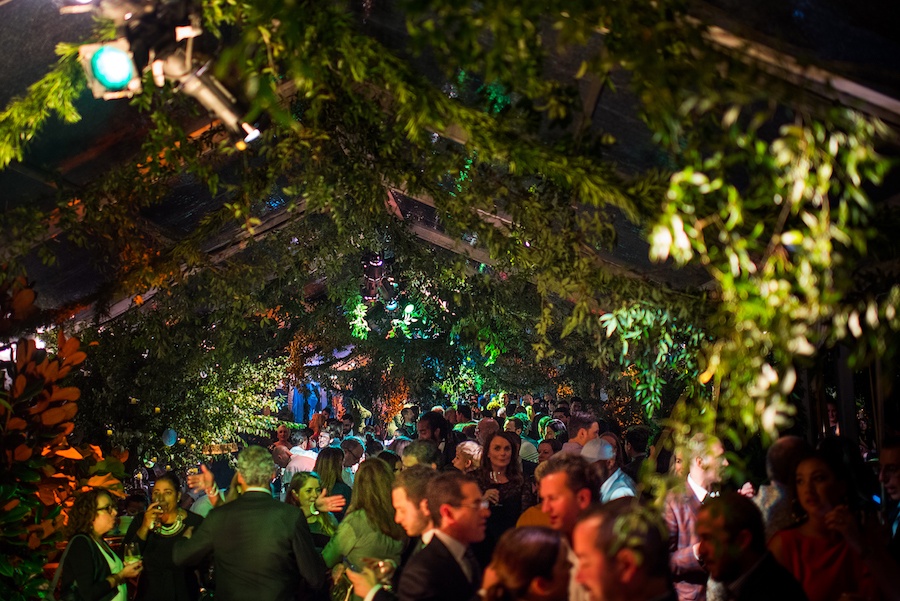 The scene at the Pop-Down.

The scene at the Pop-Down. 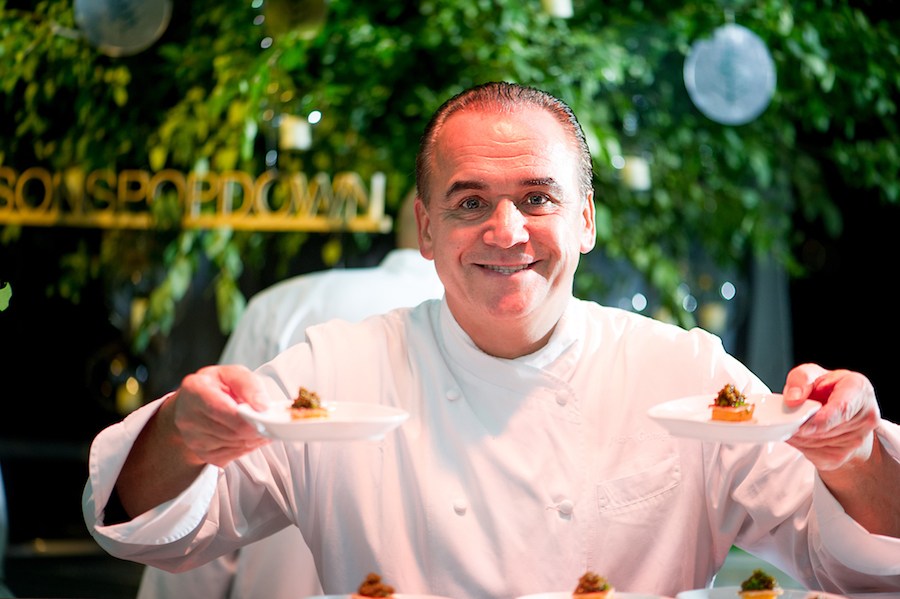 Chef John-Georges Vongerichten, who will run the main restaurant on the 59th floor. 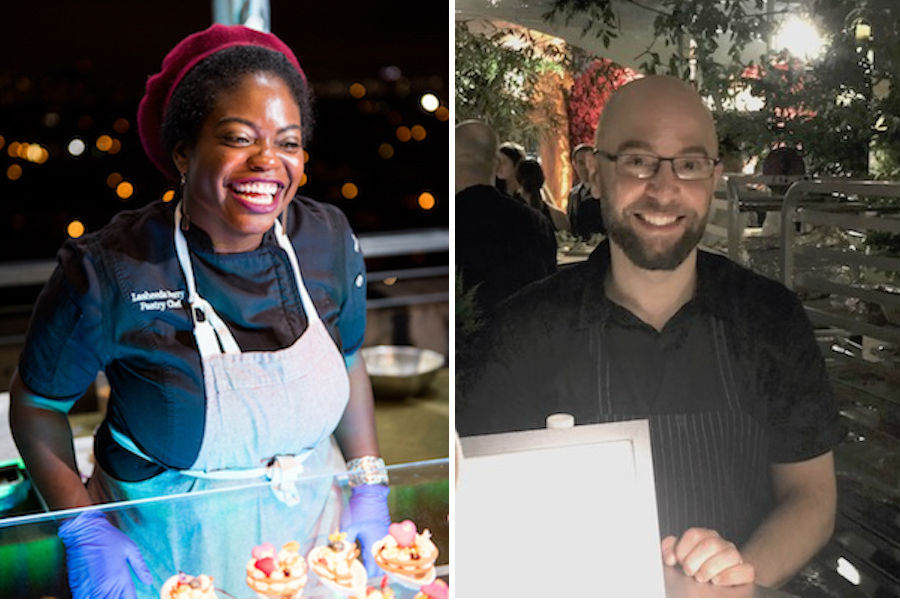 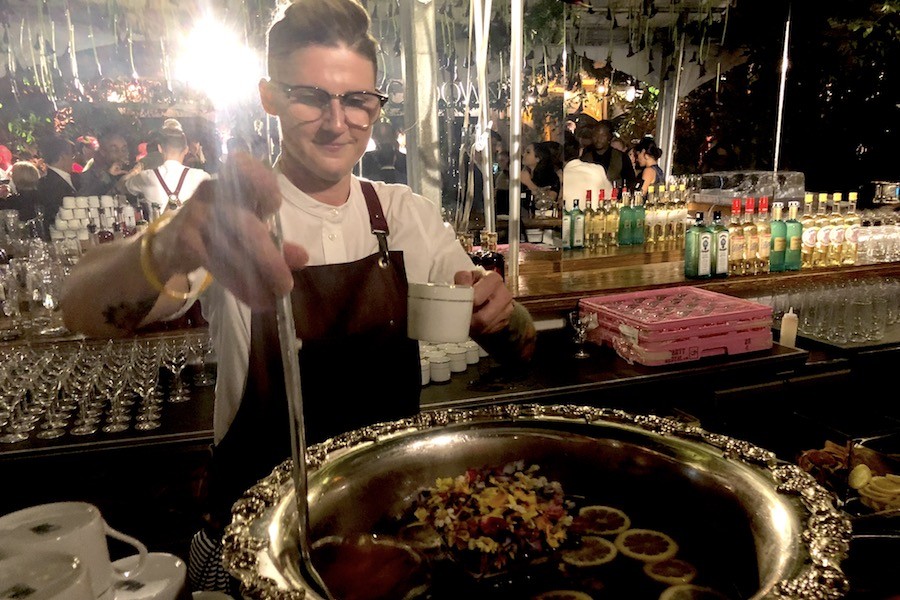 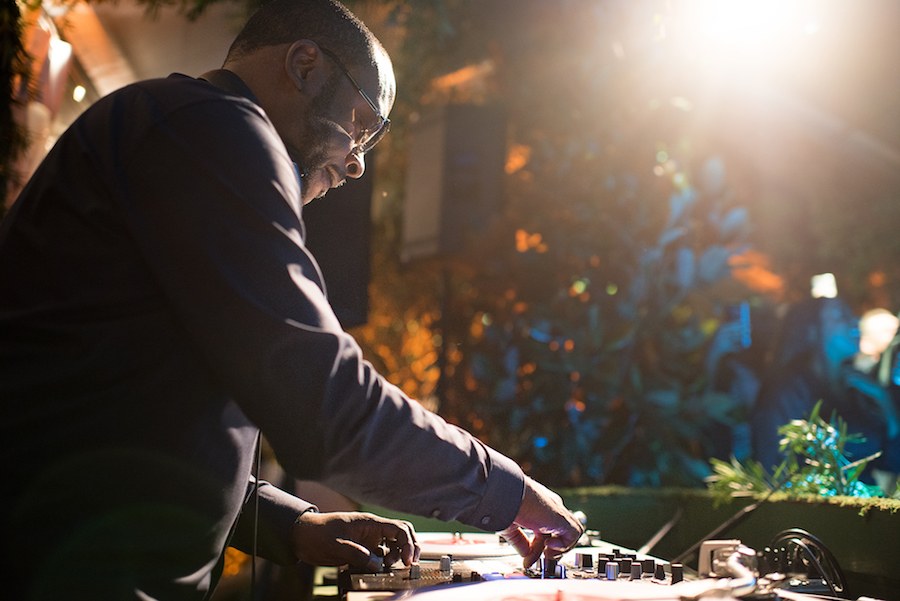 The party was the second in a series of “pop-down” events Four Seasons is staging worldwide to show off its expertise in the realm of offering guests superior service in luxurious accommodations. The first one took place in 2017 in Toronto; two more are planned in the near future; one in Miami in December and another in Hong Kong next March.

As for Comcast’s future plans, Buccholz said that this building consolidated staff in multiple Center City buildings. “What we’re starting to do is right-size our space and get people to have the adjacencies they need for their teams,” she continued. As to whether Comcast planned to bring staff from other locations in the region to the campus, Buchholz neither confirmed nor denied persistent rumors about a third tower that have been circulating for more than a year. “There are lots of rumors circulating out there. We’re focused right now on finishing the move-in to this building,” she said.