Philly Office Retail and Mosaic Development Partners filled Germantowners in on development plans designed to turn a major transit hub into a hub of activity for Germantown and Nicetown. 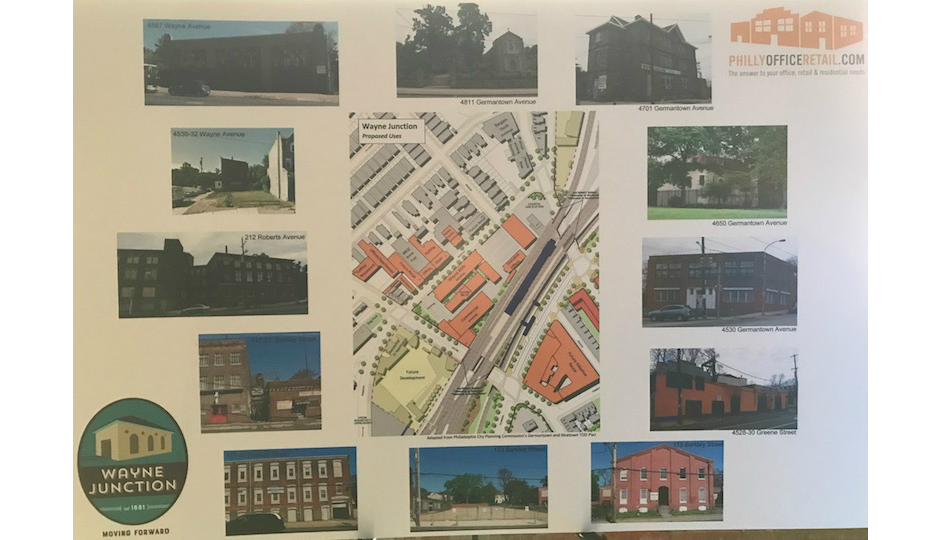 At least this diner won’t be called the Trolley Car.

But the Trolley Car’s owner plans to open another one as one of the first pieces of a multi-part jigsaw puzzle which, when completed, aims to turn the derelict industrial properties around Wayne Junction station into a mixed-use activity hub at the hinge where Germantown and Nicetown meet.

In a press conference this morning (Tuesday, Sept. 19th), Philly Office Retail President Ken Weinstein outlined his $12 million-plus strategy to get Wayne Junction moving forward with a $7.4 million assist from Mosaic Development Partners. The project aims to rehabilitate and reuse seven buildings and lots on the blocks surrounding Wayne Junction station, with Mosaic converting an eighth into a mixed-use residential/office/retail complex. 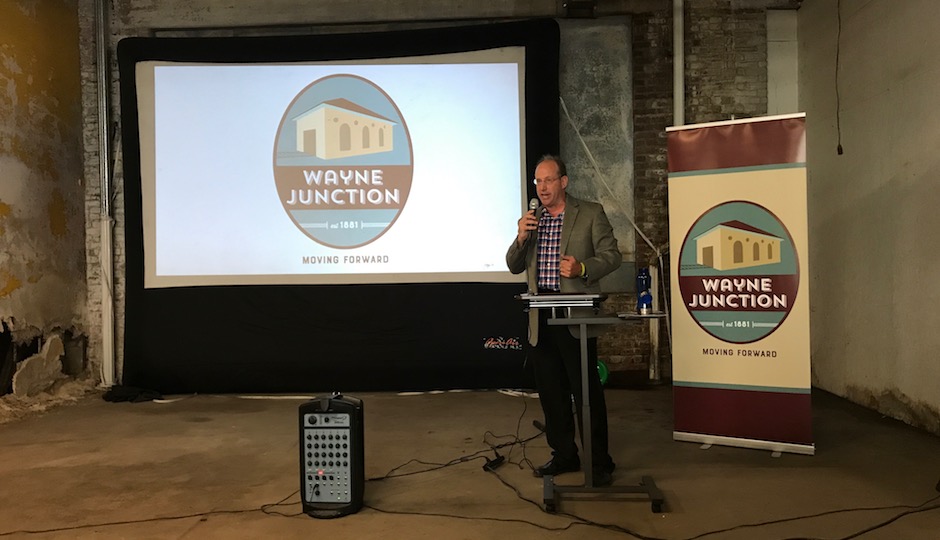 Weinstein speaking at the news conference

Weinstein noted that this project is Philly Office Retail’s most ambitious redevelopment project to date and differs from its previous projects in size and scope.

“We’re used to doing one property at a time,” Weinstein told the audience. “We buy and renovate something that was vacant and find the right use for it. This project is different because we’re going to do that with seven properties at once. If we want to find the right tenants and attract the right funding for this project, we’re going to have to do it all at once.”

The first elements of the redevelopment plan will bring new restaurants, shops, offices and housing to the area around Wayne Avenue and Berkley Street. 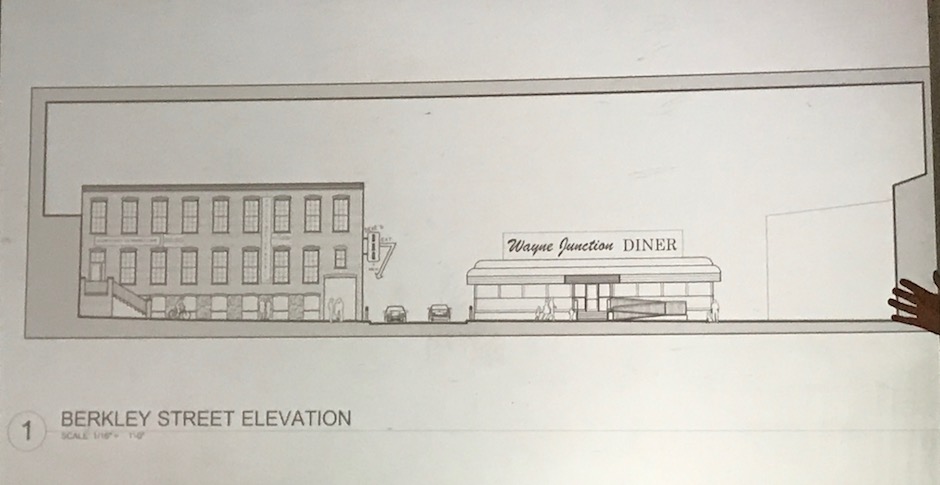 At 133 Berkley Street, Weinstein will plant a 1950 Mountain View dining car and rehabilitate it as a revived Wayne Junction Diner later this year. Next door, at 137-45 Berkley, Deke’s Bar-B-Que will replace the full-service, sit-down restaurant the owners recently closed on Shurs Lane in Manayunk. A craft brewery or distillery will join Deke’s as an occupant of the building at the rear of the site; a possible tenant, Attic Brewing Co., provided samples of their beers at the conference along with barbecue from Deke’s. (Aldan-based Attic Brewing started when the husband-and-wife owners brewed beer in the attic of their Germantown home.) The building at the front of this lot will be converted into office space.

Around the corner at 4537-63 Wayne Ave., Mosaic is teaming up with property owners JohnPaul Golaski and Alexandra Golaszewska to turn the former prosthetics factory founded by their father Walter into a new mixed-use project. The developers of Eastern Flats will combine affordable housing with a daycare center and preschool, a second café for Mt. Airy-based High Point Coffee, a maker space and a studio kitchen/restaurant run by Sylva Senat that will also offer culinary education for community residents. 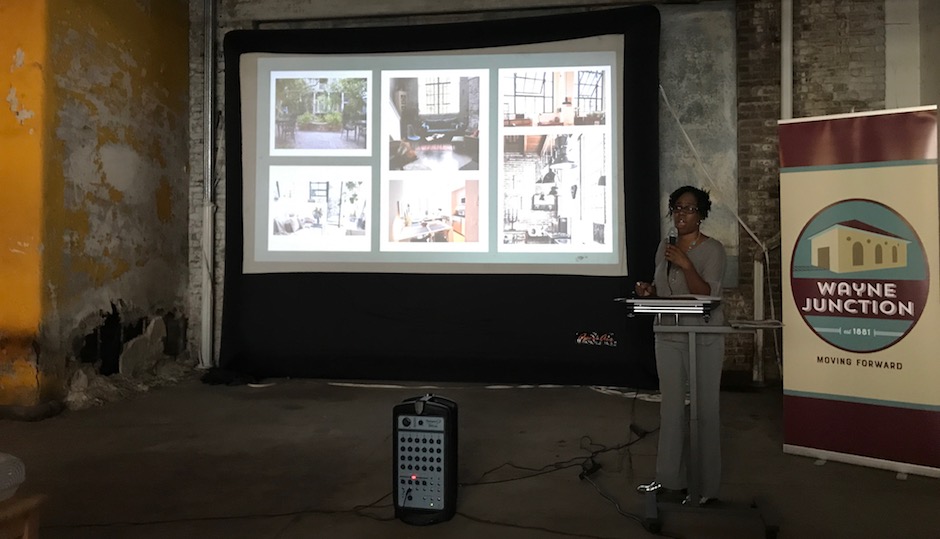 Partner Leslie Smallwood of Mosaic described her firm’s mission as “gentigration.” This, she said, was “bringing in new folks, because we need them, but we want them to integrate with those who already are here. It’s important that they reap the benefits of the investment coming into our neighborhoods. We don’t want to push anyone out, we want to be inclusive.”

As a sign of his company’s commitment to the project, Weinstein will move Philly Office Retail’s offices to the top floor of the former Charles Schaffer School at 4701 Germantown Ave.

Weinstein also described his efforts to prod the owners of other derelict properties in the vicinity to fix up and reuse their buildings. He stated that his firm intends to apply for conservatorship under Act 135 for 147-53 Berkley Street, a pair of vacant factory buildings owned by a nearby church. The buildings, he said, are deteriorating rapidly, and the conservatorship will allow his firm to stabilize them.

Weinstein identified SEPTA’s $31 million restoration of the Regional Rail station as the catalyst for this project. He noted that six Regional Rail lines pass through the station, offering unrivaled access from most of the region and quick connections to Center City. The branding logo he unveiled at the press conference incorporates one of the station headhouses.

Weinstein reiterated his commitment to reusing already standing buildings as key to his mission. He lamented the fact that the city had to demolish the building at 133 Berkley where he will place the diner but noted that the building had deteriorated beyond salvage. His conservatorship petition for the buildings next door to the ones he owns can be understood in this light.

According to an information sheet from Philly Office Retail, work on the Wayne Junction Revitalization Project should begin in early 2018, with a projected tenant move-in date of early 2019.

Updated Wednesday, Sept. 20, at 2:27 p.m. to correct the relationship between Walter Golaski and his two children.