The new six-story mixed-use building will feature a faithful reconstruction of the Midcentury Modern facade that landed the original building on the city's historic register. 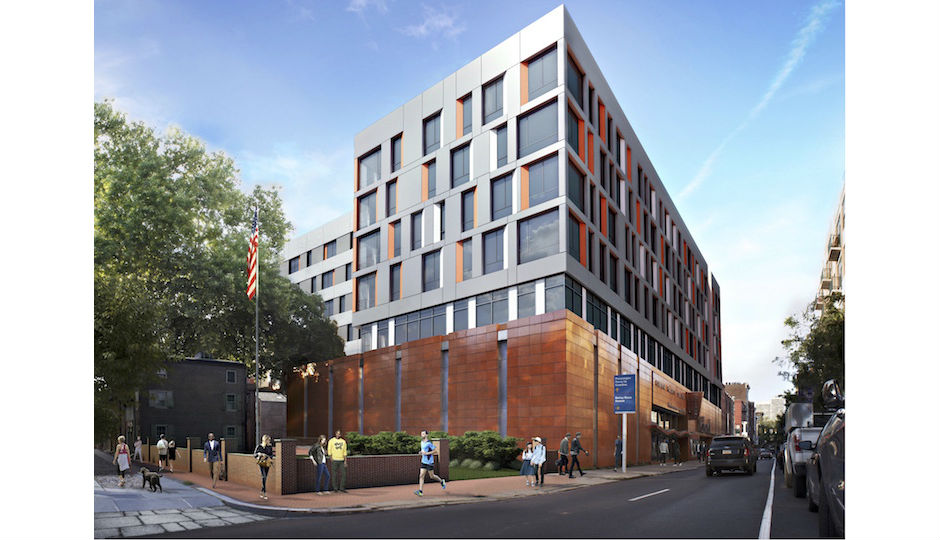 A little more than a year ago, as it was being demolished, the old National Products Company Building on North Second Street in Old City got a thorough going-over from Bradley Maule at Hidden City, who noted that whatever else happened, the bright-orange-tile Midcentury Modern facade that made the building worth saving would be preserved and restored.

The only difference between Maule’s description of how that would happen then and what will happen starting Friday, June 9th, is that the people in charge of the reconstruction project have changed. Replacing Glenside-based Dale Corporation is the Buccini/Pollin Group (BPG), a Wilmington-based developer of multifamily housing, office buildings and mixed-use projects, including Talen Energy Stadium (nee PPL Park), the home of the Philadelphia Union soccer team on the Chester waterfront.

BPG will develop the property on behalf of its owner, an entity of the AFL-CIO Building Investment Trust, and manage it through its ResideBPG property management arm. The design remains the one Barton Partners unveiled last year: a six-story building clad in metal panels with orange accents that match the restored and newly manufactured tiles below. TN Ward Company will be the project’s general contractor.

In a news release, BPG Co-President Robert E. Buccini said, “We are thrilled to finally begin construction on The National, our first of many planned apartment ventures in Philadelphia. We have steadily expanded our residential development and ResideBPG management platform in nearby Wilmington and have long sought such a signature location as an entry into the strong Philadelphia multifamily market.”

“This development has been in the works for decades and we are eager to see The National join the incredible array of residential and recreational amenities in Old City,” Boris Kaplan, BPG vice president, said in the same release. “We are treating this project with great care in recognition of the historic fabric of the surrounding community.  This location is tough to beat and we expect the diverse dining, cultural and commercial destinations in this thriving neighborhood to drive demand for these apartments.”

When it was being demolished, the property owner agreed to a stipulation the city included with the demolition permit that the tile and metal facade be preserved, restored and rebuilt. New tiles are being produced to replace those that are in poor condition or have suffered damage.

When completed in the summer of 2018, the new National will contain 192 apartments, 2,000 square feet of street-level retail space, and resident garage parking for 60 cars. Building amenities will include a fitness center, a pet spa, a two-story clubhouse and a roof deck with gas fire pits and grills.

The project will also transform a glorified parking lot next door to the building into an actual park that will serve as a more attractive entrance to next-door Elfreth’s Alley, the nation’s oldest continuously occupied residential street.

BPG is currently building a similar mixed-use residential/commercial project in downtown Wilmington designed to speed the transformation of that city’s Market Street into a live-work-play thoroughfare with activity at almost all hours of the day. That’s already an accurate description of Old City today, which means BPG has less in the way of heavy lifting to do with this particular revitalization project.

A groundbreaking ceremony at 10 a.m. Friday will officially mark the start of construction.