Is “Spring Arts” the Next Midtown Village?

Two patient developers think this area near the emerging rail park could be — and they’ve got the long-term plan to prove it. 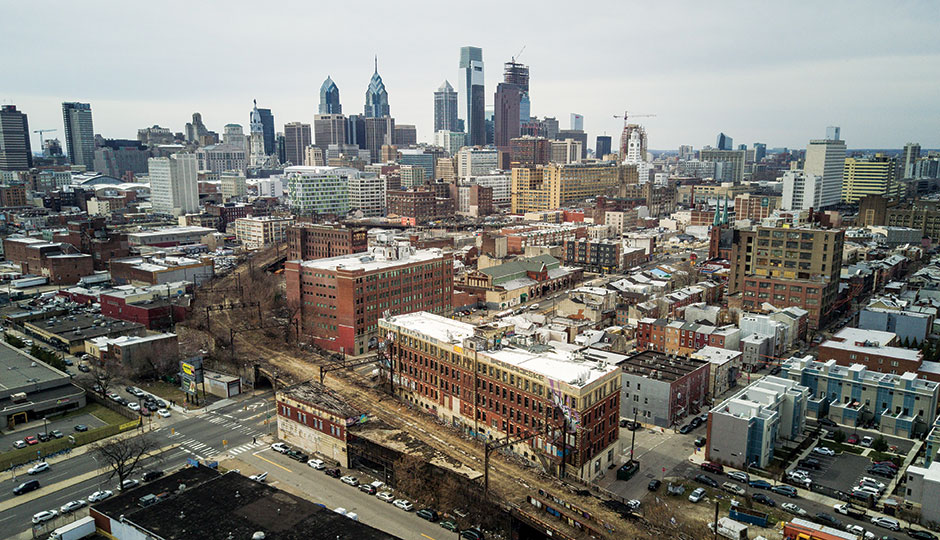 That the viaduct rail park is actually becoming a thing is, well, dumb luck. In 2015, when developers Aaron Cohen and Craig Grossman set their sights on a block just north of Chinatown, they liked what the elevated rail tracks lent to the area; they were authentic and gritty in the best possible way. Now the first phase of the park is under way, and that’s a huge bonus for their audacious plans.

The newly paired team (their development company, Arts & Crafts Holdings, was formed in 2015 and has one project on the books — this) fell hard for what Grossman calls “the metaphorical hole in the doughnut.” We’re sitting in said hole, in the conference room at 990 Spring Garden. Grossman, with a mop of dark curls and an untucked plaid shirt, is pointing at an oversize rendering of the neighborhood — his future version of it, anyway — which includes a few blocks around Spring Garden and 10th streets. “It’s an opportunity to bring together what’s happening in Fairmount and Brewerytown, Northern Liberties, Temple and the central business district,” he tells me. That’s a respectful way of saying this is one of those dead-zone blocks, situated between lively neighborhoods but lacking the commercial activity to connect the thriving areas. So Grossman, 49, and Cohen, 38, started making offers on buildings that weren’t for sale. Now they own 12 parcels of land. But they’re careful not to use the word “revitalize.” “Our process is gentler. A lot of developers like to have a takeover,” says Cohen. “We’re coming into a place where there’s not much activity and bringing the excitement of entrepreneurs.” And no flipping.

Arts & Crafts Holdings is focusing on commercial spaces, since other nearby developers are already creating residential. “Creative class” companies have begun to snap up leases, drawn by the lofty feel and the prospect of being on the cusp of change — plus the affordable prices.

The plan is tried and true. Grossman, a native New Yorker, spent 15 years carrying out Tony Goldman’s vision of Midtown Village. As was the case with the former Gayborhood, a name change is on tap. The developers are hoping “Spring Arts” sticks. “You’d hear Callowhill, West Poplar, Eraserhood,” says Grossman. “It felt like an area that didn’t have an identity.” Even pugnacious Philadelphians have to admit: Spring Arts sounds more inviting than Fishtown. Maybe one day, it will be. 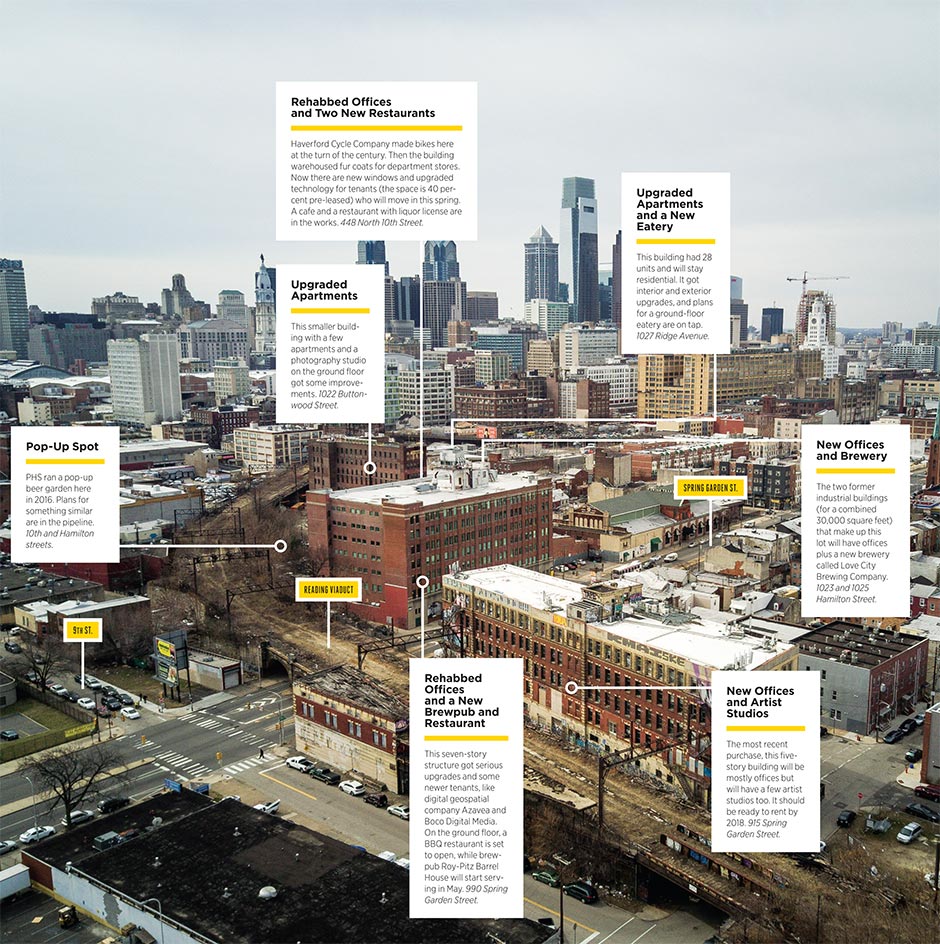 1. Pop-Up Spot
PHS ran a pop-up beer garden here in 2016. Plans for something similar are in the pipeline. 10th and Hamilton streets.

2. Rehabbed Offices and Two New Restaurants
Haverford Cycle Company made bikes here at the turn of the century. Then the building warehoused fur coats for department stores. Now there are new windows and upgraded technology for tenants (the space is 40 percent pre-leased) who will move in this spring. A cafe and a restaurant with liquor license are in the works. 448 North 10th Street.

3. Upgraded Apartments
This smaller building with a few apartments and a photography studio on the ground floor got some improvements. 1022 Buttonwood Street.

4. Upgraded Apartments and a New Eatery
This building had 28 units and will stay residential. It got interior and exterior upgrades, and plans for a ground-floor eatery are on tap. 1027 Ridge Avenue.

5. New Offices and Brewery
The two former industrial buildings (for a combined 30,000 square feet) that make up this lot will have offices plus a new brewery called Love City Brewing Company. 1023 and 1025 Hamilton Street.

6. New Offices and Artist Studios
The most recent purchase, this five-story building will be mostly offices but will have a few artist studios too. It should be ready to rent by 2018. 915 Spring Garden Street.

7. Rehabbed Offices and a New Brewpub and Restaurant
This seven-story structure got serious upgrades and some newer tenants, like digital geospatial company Azavea and Boco Digital Media. On the ground floor, a BBQ restaurant is set to open, while brewpub Roy-Pitz Barrel House will start serving in May. 990 Spring Garden Street.

Published as “Snapshot: Is This the Next Midtown Village?” in the April 2017 issue of Philadelphia magazine.