Whether you’re celebrating one, five or 10 years, here’s how to mark a milestone wedding anniversary. 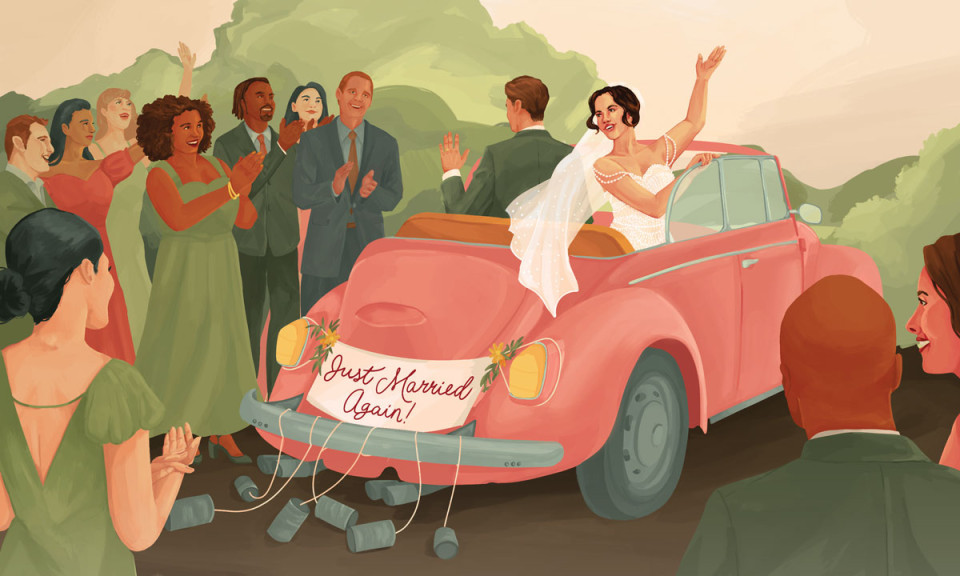 Sure, Philadelphia Wedding primarily covers all the fun leading up to the Big Day — proposals! planning! the main event! — but what happens afterward is just as important, whether it’s jetting off on your honeymoon or celebrating an anniversary. If you’re considering a vow renewal, Donna Forsythe of Lehigh Valley Celebrants has tips, advice and examples to help you pull yours off.

Know Your Reasons
As the Year of the Wedding winds down, it’s clear that postponed nuptials and second ceremonies­ will keep people­ racing to the altar well into 2023. But even established partners deserve to commemorate their love story again. Pandemic­ aside, Forsythe says she’s seen second-time-around celebrations for a variety of reasons: “In general, couples do this to mark a milestone anniversary year, while others didn’t have the wedding they’d hoped for and want a chance to do it right.”

Make It Personal
These festivities typically pay homage to the couple’s journey together since their wedding, whether it was last year or a decade ago. The events incorporate rituals and elements that resonate with the pair and their guests, says Forsythe. Wishing stones are among the many thoughtful ways to honor the occasion. Each guest holds a stone during the ceremony, imparting their love into it; the stones are then collected and placed in a jar as a reminder of the support the couple has from loved ones.

Yes, You Can Invite Guests
Children and family members are often incorporated into the occasion. But Forsythe adds that even a duo’s running club has played a part in a vow renewal. It’s about acknowledging the people who are part of your story. Forsythe suggests holding a time of sharing, as is common in a Quaker union: When guests are invited, they’re told they may offer a story, comment, wish or reading during the ceremony. “We will carve out five or 10 minutes for this,” she says. “It is really meaningful and can be quite emotional.”

Consider Your Venue
Do you want to keep it simple or go all out? As with your wedding, your venue will play a part in directing that. Philadelphia Wedding Chapel in Sherman Mills, for example, is a one-stop shop for efficient, nondenominational nuptials: The venue is decorated, and receptions are held at secondary locations. Forsythe says people don’t always return to the venue where they were first married, opting to seek out a new setting that holds significance: “Once, I had a couple who met at a bus stop and held their vow renewal there.”

Work With a Pro
Book a trained officiant instead of trusting a friend who got ordained online, says Forsythe. “Anyone can get certified, but you need a professional for such an important moment.” Officiants employ a genuine sense of intention in creating vow renewals. Forsythe asks a list of open-ended questions to find out what your shared hopes are for the event. “The more I listen, the more I can share ideas that may be of interest. A good celebrant will also be able to recommend other professionals for the ceremony.”

Something old transforms into something new via Nishi Jewelry’s Joanna Bengoa. The Fitler Square resident’s custom work includes repurposing engagement rings for vow renewals; duos can also incorporate valuables like family-owned precious stones. A ring mounting featuring symbols of a pair’s three kids is one of her favorite pieces.

Published as “More Perfect Union” in the Winter/Spring 2023 issue of Philadelphia Wedding.